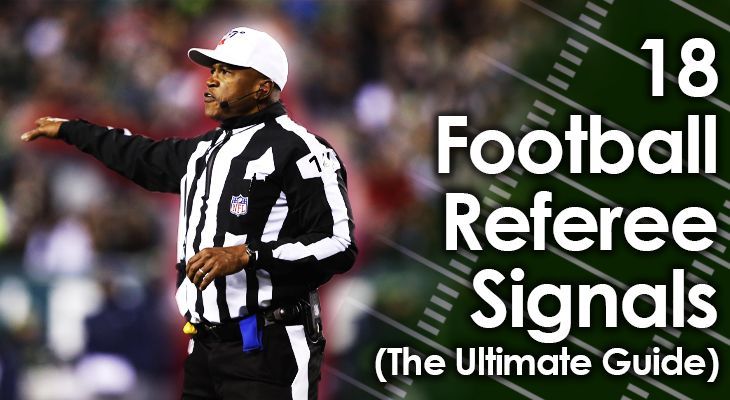 Football is a complex game.

So unsurprisingly, there are many referee signals you must know.

Referee signals are vital because they communicate referee decisions to the eyes to those too far away to hear the call.

Before referees wore microphones, they had no choice but to rely on hand signals to let everyone know the penalty.

And they're still important for youth football leagues, where there is no microphone on the referee at all.

Below, we'll dive into all of the main football referee signals so you have a better understanding of what the referee is saying when you're too far away to hear them announce a penalty.

As mentioned above, hand signals accompany every penalty call the referee makes throughout a game.

These referee signals ensure that everyone who is either in attendance or watching a football game at home will know what penalty gets called...

Regardless of whether the referee is wearing a microphone that works, or whether the people can actually hear the audio.

Below, we'll outline the main football penalty signals and describe what body movements you'll see from the referee for each. 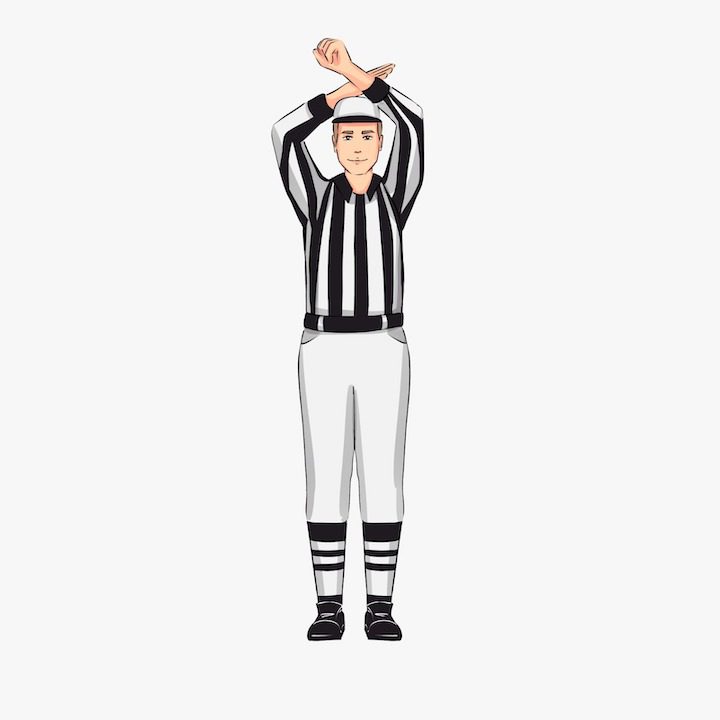 The personal foul penalty is a "catch-all" for some of the major infractions in the game of football. This foul includes unnecessary roughness, roughing the passer, and illegal hit out of bounds.

All these result in a 15-yard penalty on the infracting team.

For this penalty, the referee will put both of his hands above his head and have one wrist strike the other one -- almost in a chopping motion. 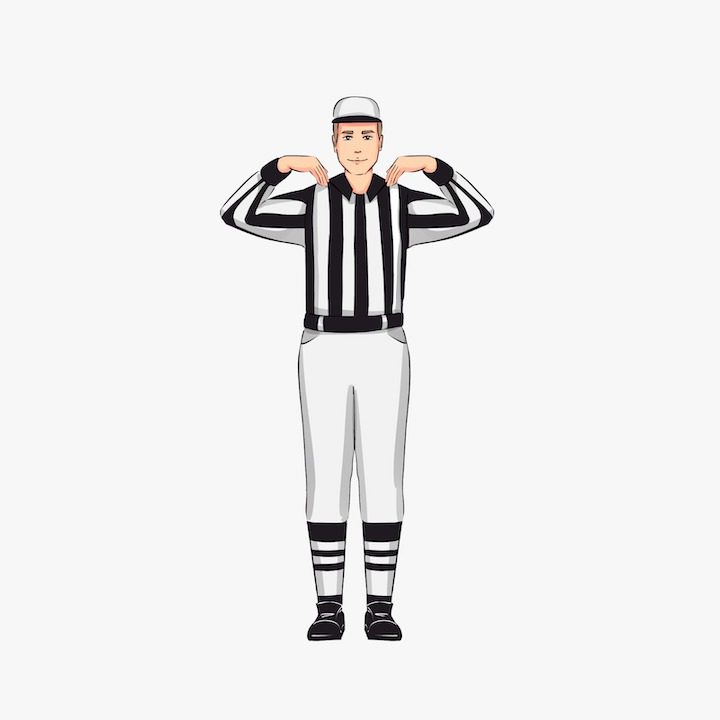 Only certain players may touch the football in certain situations.

For example, an offensive lineman who is an ineligible receiver can't be the first player on offense to touch the ball on a forward pass attempt.

There are also situations in punts or kicks that relate to this.

In these situation, the referee calls an illegal touch (or illegal kick / illegal batting) penalty.

In all of these variations, the referee will tap his shoulders with the fingertips of each hand. It'll look like he's making a small circle with both of his arms. 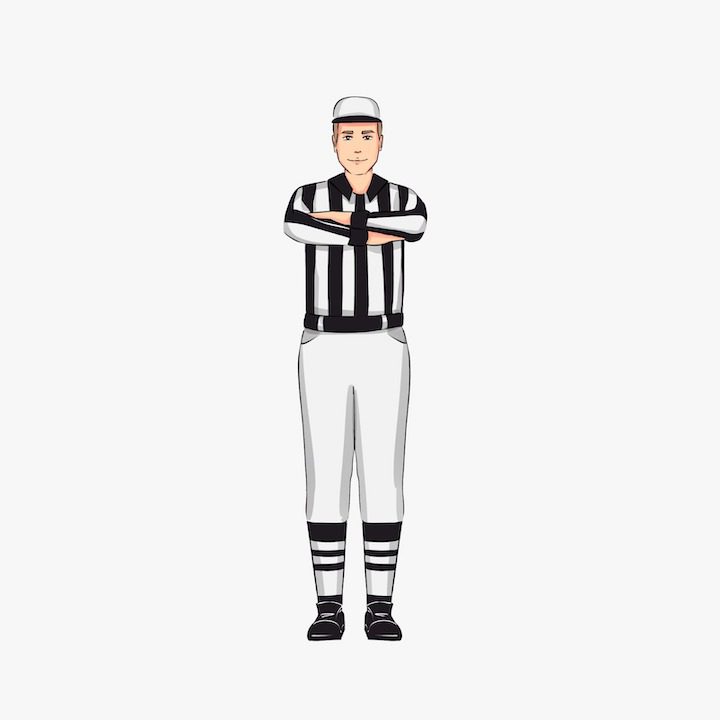 On every play, the team with possession of the football will have a certain amount of time to run a play.

This amount of time varies depending on the level of the game, and the different situations in that game.

If the team doesn't snap the ball before that play clock expires, they get called for a delay of game penalty.

For delay of game, the referee will fold his arms one over the other out in front of his body.

This signals the penalty call, which results in a five-yard loss for the team in possession. 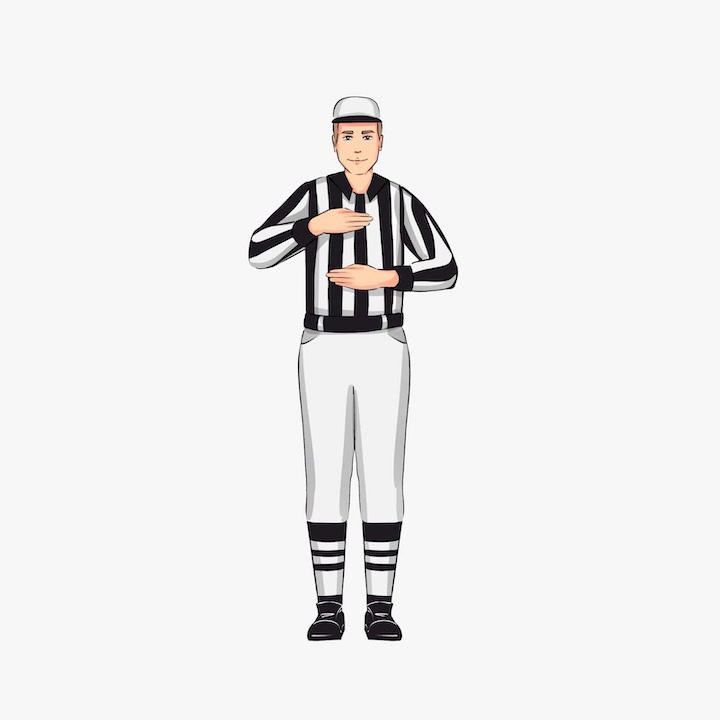 A false start occurs any time a player on the offensive team moves before the snap of the ball.

This can be a slight movement like a nod or jerk of a body part or a full-blown early takeoff from the line of scrimmage.

Either way, this penalty results in a loss of five yards for the offense.

On false starts, the referee will hold his arms out in front of him and rotate them over each other, making circular motions with his arms.

This is the same referee signal made for Illegal Motion and Kick Out of Bounds penalties. 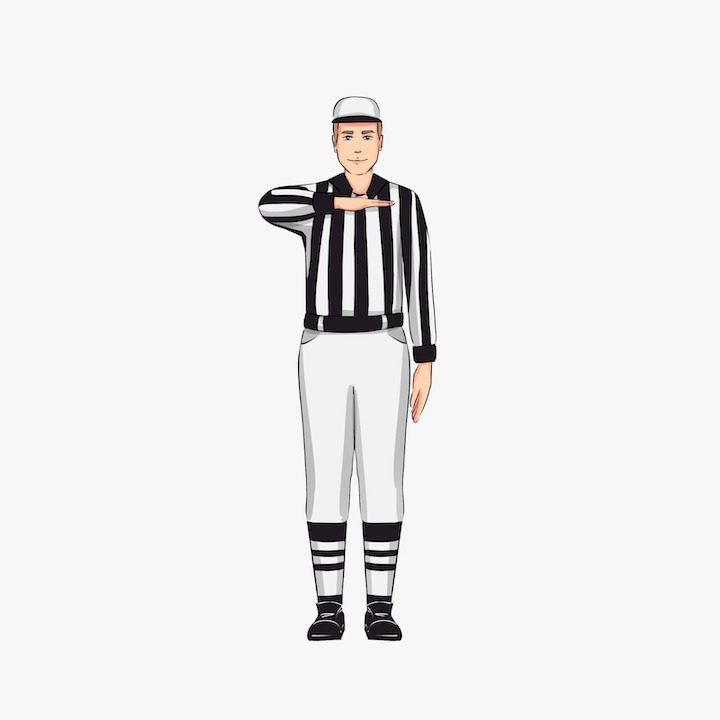 A similar penalty is illegal motion.

This occurs in a number of ways, but mostly if multiple offensive players go into a shift at the same time, or one player starts a shift before another player finishes his.

The penalty is the has the same result as a false start, but the signal referees use is quite different.

The referee will hold one arm out in front of his body, with his hand parallel to the ground, and he'll form a horizontal arc with it. 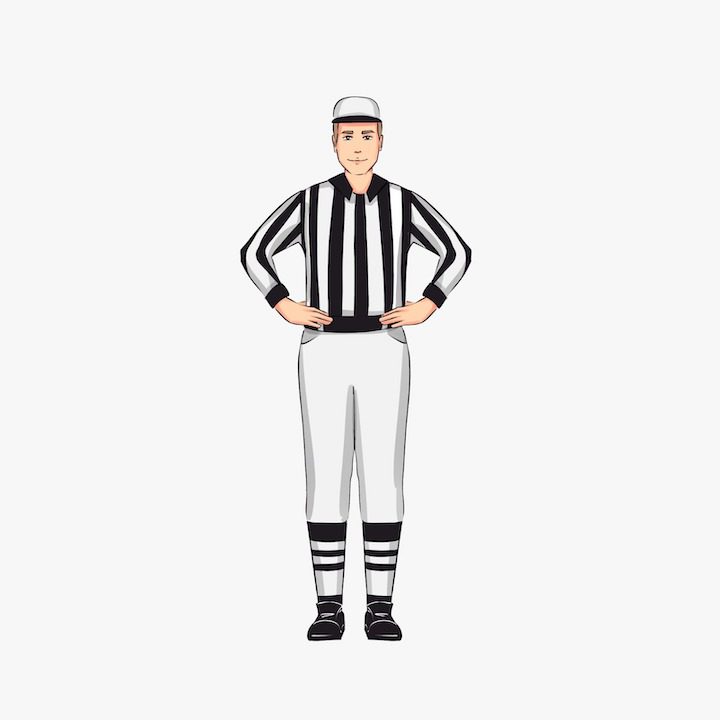 Offside is one of the most common penalty calls on the defense.

It occurs any time a defensive player goes across the line of scrimmage and then the offense snaps the ball.

(Learn the differences between the three in this post)

All result in the same five-yard penalty on the defense, and the penalty signal is the same as well. The referee will put both hands on his hips. 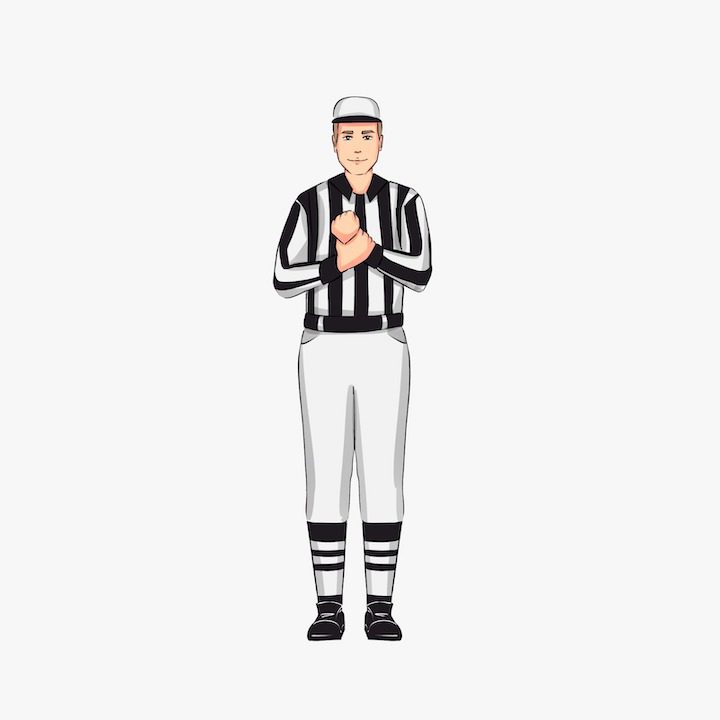 Holding is one of the most common penalties called in football.

It can happen on both offense and defense, and occurs any time a player of one team holds or grasps a player of the other team.

The holding can be of a jersey or the other player's body.

Offensive holding results in a 10-yard penalty and a repeat of the previous down.

On the other hand, defensive holding results in a 5-yard penalty and an automatic first down for the offense.

In both cases, the referee signal will be the same. The referee will clench one of his wrists with his other hand out in front of his chest.

8. Illegal Use of Hands 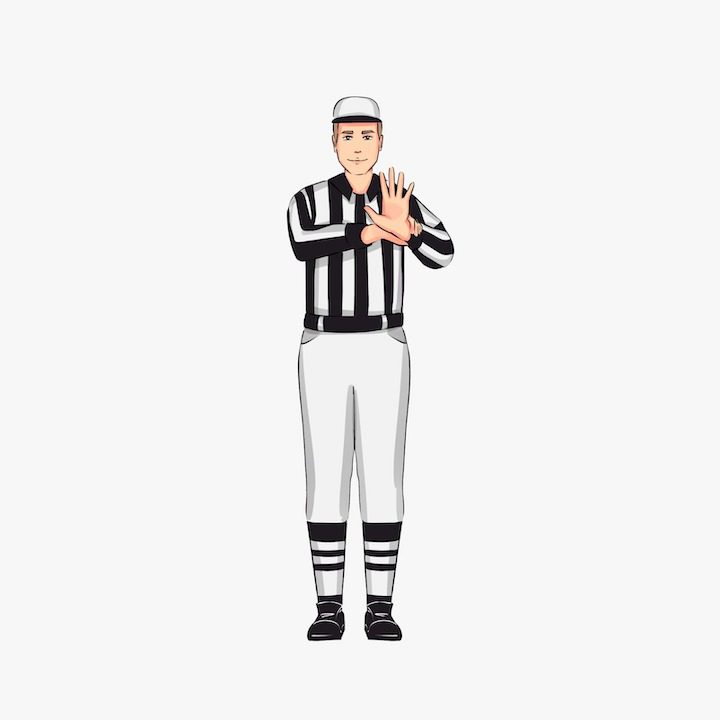 An illegal use of hands penalty is often called when one player's hands ride up into the face mask of a player from the other team.

This happens a lot along the interior of the line.

For this penalty signal, the referee will grasp one of his wrists with the other hand. His other hand will extend out in front of him and will be open all the way, like he's making a stop signal. 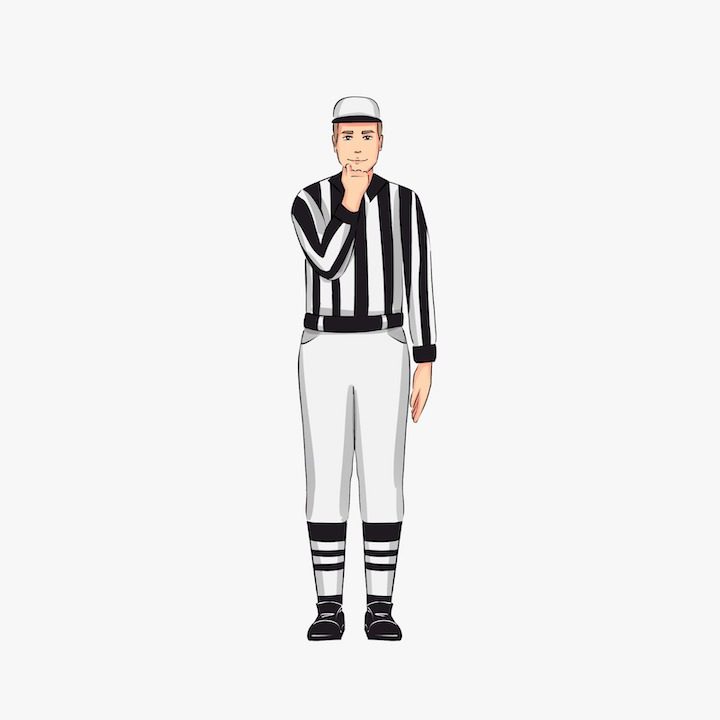 If a player fully grabs the face mask of the other team, he'll get called for a face mask penalty.

It's more serious than illegal use of hands because it's more dangerous.

The referee will signal this penalty by simulating that he's grasping a face mask with one hand, and then pulling downward with that hand. 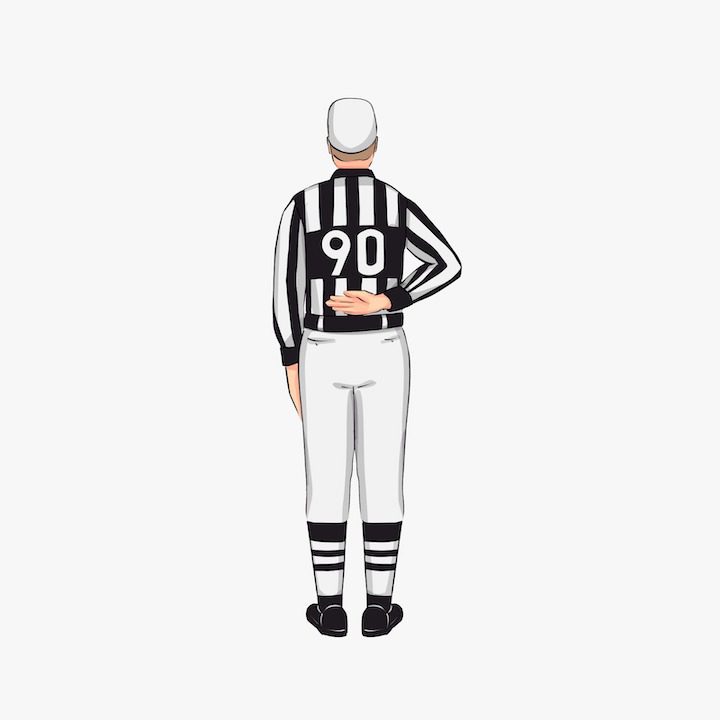 In football, some forward passes are legal while others are not.

In this case, the referee will signal the penalty by waving one hand behind his back. The other arm will be straight down at his side. 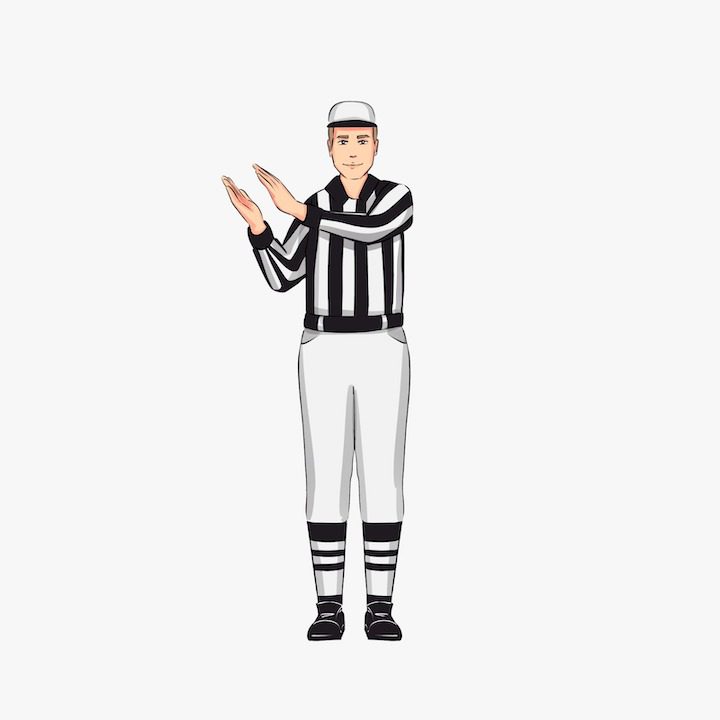 There are times when a quarterback simply can't find an open receiver, and his best option is to throw the ball away -- accepting an incomplete pass rather than getting sacked, for instance.

This is completely legal, but only if it's done from outside the pocket and if the ball at least reaches back to the line of scrimmage.

If not, then the QB gets called for an intentional grounding penalty.

To signify this penalty, the referee will put his arms parallel to each other. Starting near one side of his chin, he'll then wave them down in a diagonal pattern toward the ground. 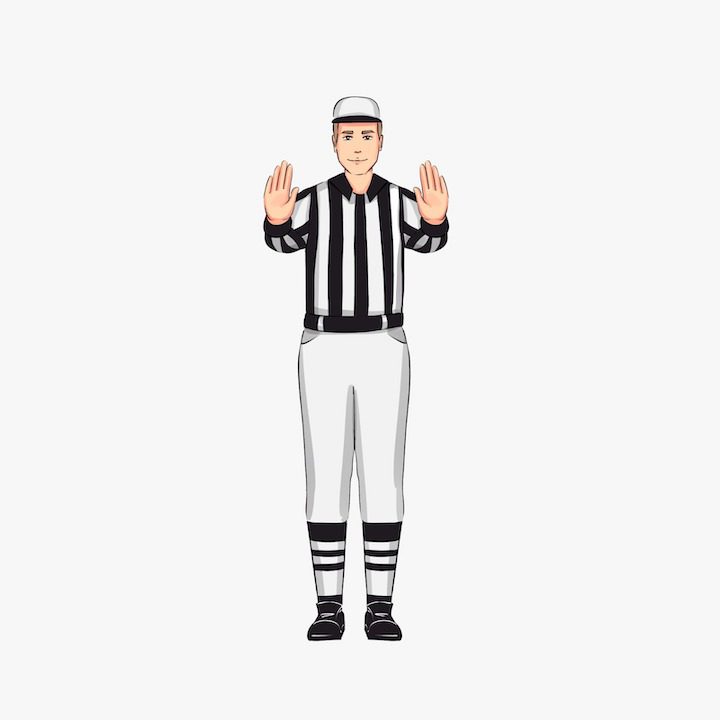 There are rules surrounding what receivers and defenders can do as a forward pass is in the air.

The defensive player CAN'T make solid contact with the receiver before the ball gets to him, in order to prevent a successful catch.

The receiver also can't push off the defender to get open.

If either of these happen, the referee calls a pass interference.

While the result of the penalty will be different for offensive and defensive pass interference, the referee signal will be the same.

The referee will open both of his hands and extend them straight forward at shoulder height, with his hands facing up.

He'll do that first, and then point toward the side of the field that the penalty is being called on, either the offense or the defense. 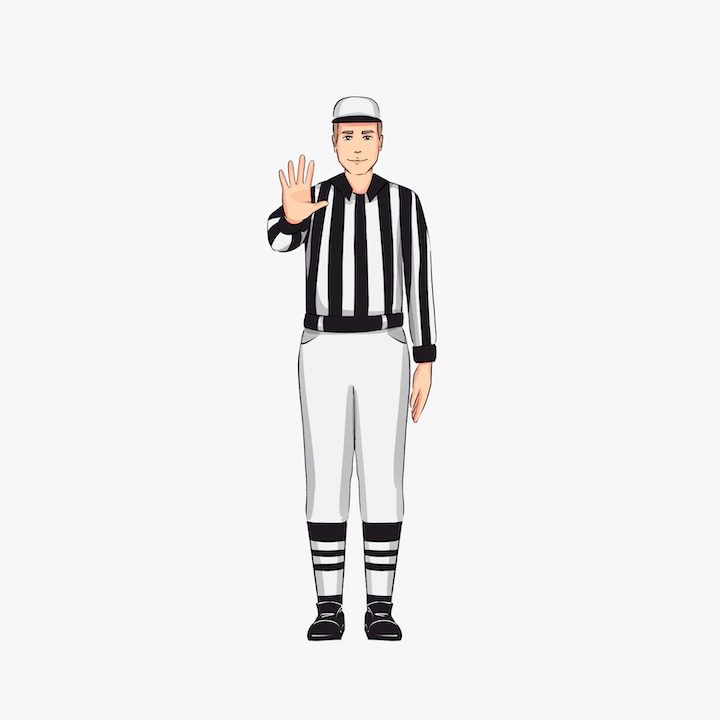 Illegal contact is similar to defensive pass interference, with one small change.

A defensive player cannot make contact with a receiver five yards beyond the line of scrimmage.

If he does so before the quarterback throws the ball, he'll get called for illegal contact rather than pass interference.

It's not as major a penalty as pass interference, but it's still a penalty.

To call it, the referee will extend one open hand out forward from his body at shoulder height. 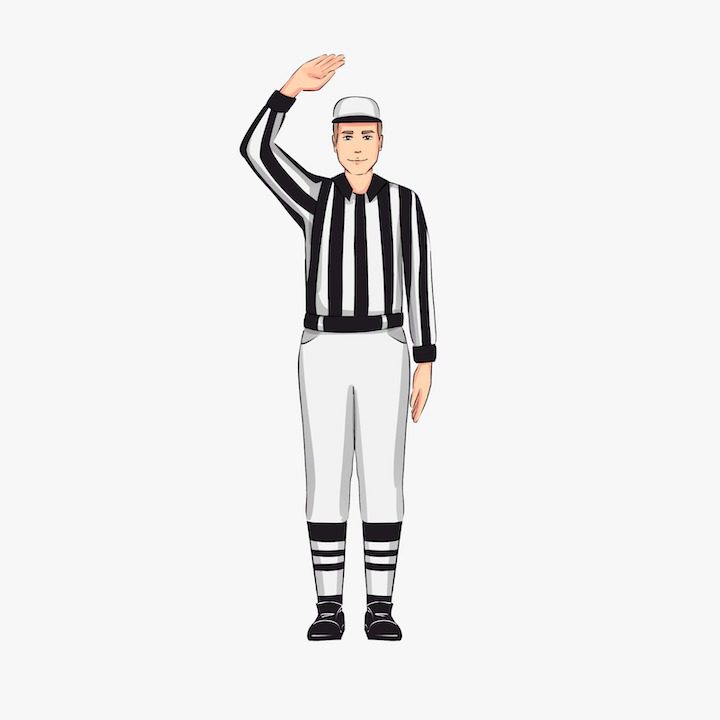 On punt and kick returns, players may opt to call a fair catch before the ball ever gets to them.

This will allow them to make the catch cleanly without worrying about players hitting them in a vulnerable position.

When doing so, the play is over as soon as he makes the catch.

There are rules that determine how returners must signal a fair catch, though, and if he doesn't do it correctly, he'll get called for an invalid fair catch signal penalty.

In this instance, the referee will waive one of his hands above his head, in a similar fashion to how the returner would do to signal a fair catch. 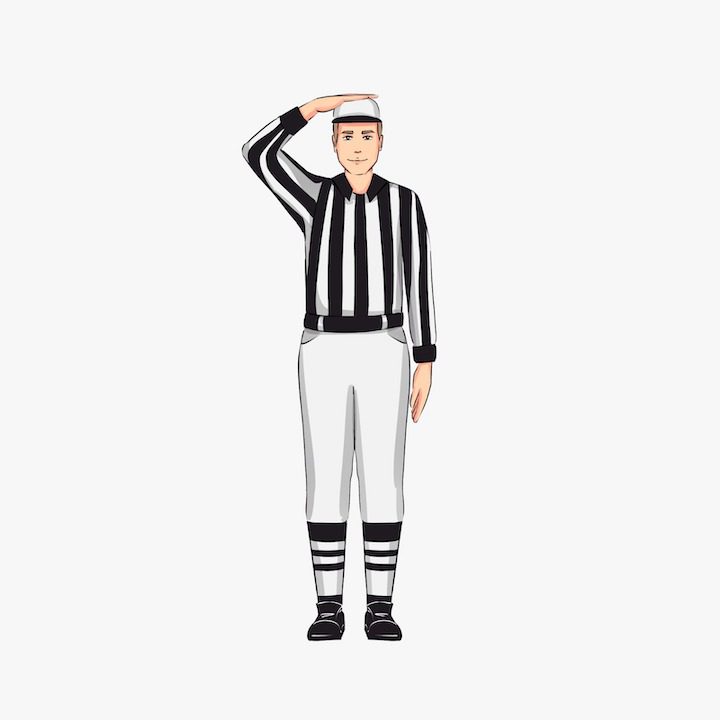 There are certain rules that dictate which players may be on certain spots on the field.

On passing plays, for instance, offensive linemen can't go beyond a certain zone from the line of scrimmage until their team records a completion (or if the defense gets an interception).

If this happens, referees call them for an ineligible player downfield penalty.

For this, the referee will take his right hand and touch the top of his cap to signify the penalty. 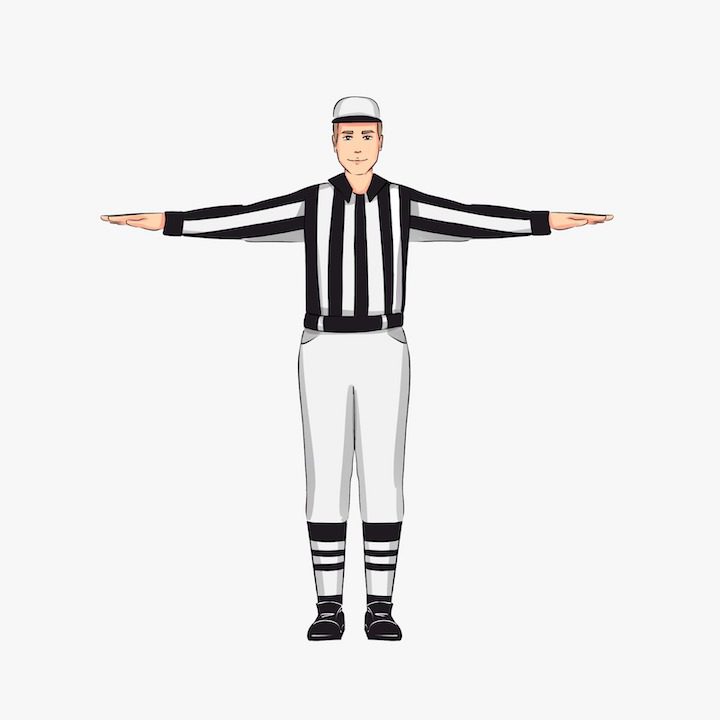 There are some personal fouls that officials deem unsportsmanlike conduct.

It could be a player taking off his helmet on the field or arguing with the referee.

To signify this penalty, the referee will hold both of his arms out to his side fully outstretched, with the palms of his hands facing down. 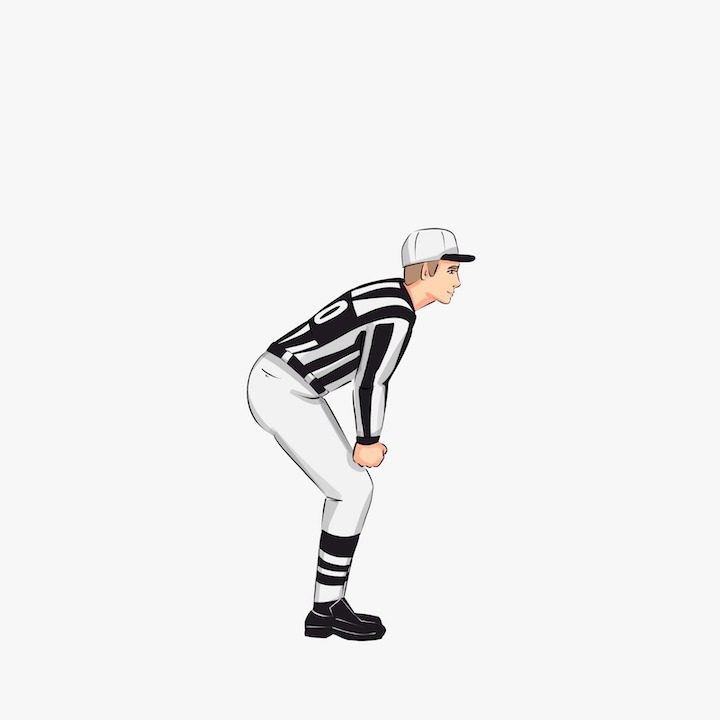 There are rules surrounding how players can and cannot block players on the other team.

One of the main ones is that a block can't be initiated below the waist.

Other variations of this include a chop block and clipping.

There are slight differences in these penalties, but the signal will be just about the same for all.

In each case, the referee will bend over at his knees and then strike a part of his lower body.

For illegal block below the waist, he'll take one hand and strike it to the front of his thigh.

For chop block, he'll strike the side of his thighs with both hands.

For clipping, he'll take one hand and strike the back of his calf. 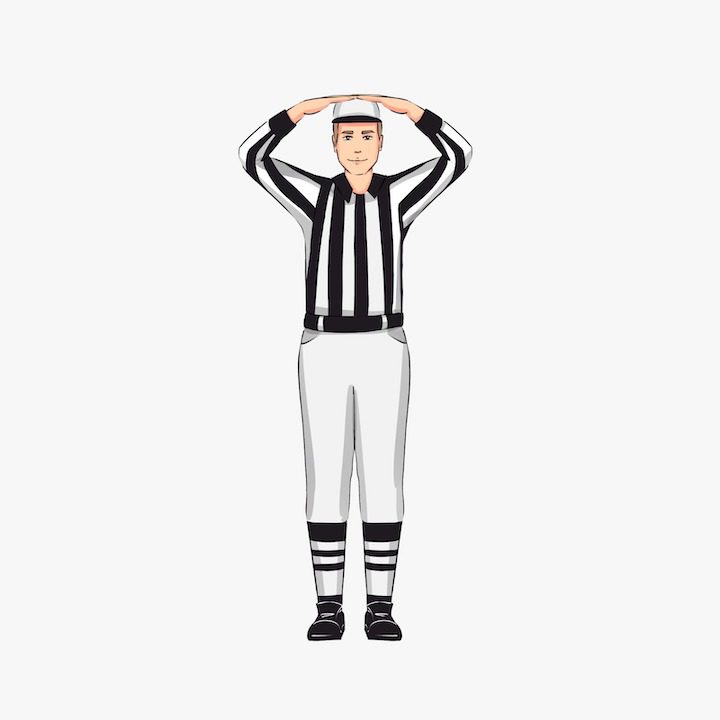 Each side can only have 11 players on the field at one time.

There are rules about how teams make substitutions, including when players on offense can leave the field -- same for the defense.

On offense, only 11 players are allowed in the huddle, though more than 11 can be on the field at the same time in the middle of substitutions.

If either side gets caught breaking these rules, a too many men on the field penalty will be called.

The signal from the referee is the same. He'll take both of his hands and tap them on the top of his cap.

These are movements the referee will make with his hands and body that tell all those playing, watching, or coaching what penalty is being called.

While the outcome of these penalties may be different based on the football rules at the level being played (youth, high school, college or professional), the penalty signals are always the same.