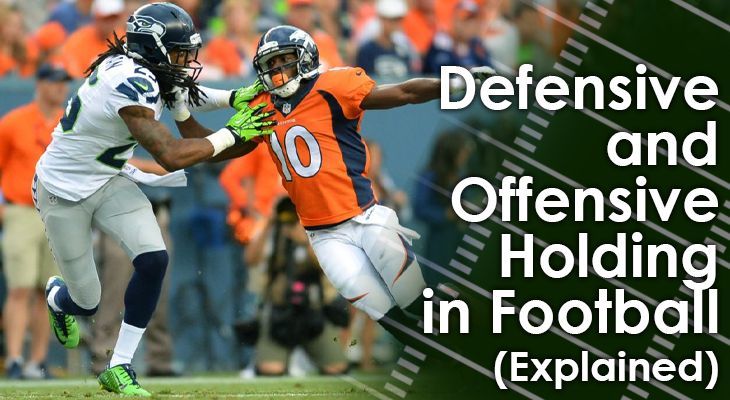 Holding is one of the most commonly-called penalties in football.

At times, it can be difficult to understand what constitutes holding and what doesn't just by watching a game.

It can be quite confusing since referees can call it on both offensive and defensive players.

There are certain things referees look for when calling a holding penalty on the offense and the defense.

If you're a player (or a coach), understanding what constitutes defensive and offensive holding is very important.

These penalties may be common but they can completely change drives and ultimately result in big advantages for the other team.

Let's take a closer look at both defensive and offensive holding penalties. 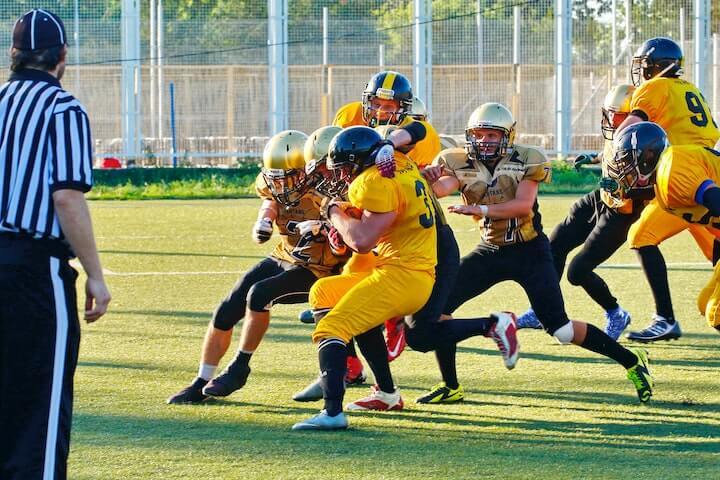 Referees can call offensive holding penalties on just about any player on the offense -- most often on players performing blocks.

1. Offensive linemen are usually the ones called for offensive holding. These usually occur as they block defenders from getting by them and into the backfield.

2. At times, running backs also commit a penalty when they are staying in to block.

3. As such, wide receivers are sometimes called for it too -- when they are helping out in the blocking game.

Football referees will call an offensive holding penalty if a player does the following, as laid out by the NFL in its playbook:

"[If a player uses] his hands or arms to materially restrict an opponent or alter the defender's path or angle of pursuit. It is a foul regardless of whether the blocker's hands are inside or outside the frame of the defender's body."

The referee looks for three things before deciding to call holding or not:

Offensive players are not allowed to grab onto ANY part of their opponent's body or equipment (be it their shoulder pads or jersey).

A lot of offensive linemen try to get away with grabbing the inner part of a defender's shoulder pads because it can be hard for refs to spot this.

However, that is illegal by the rule book as well.

The penalty that can occur on just about any offensive play -- these include field-goals, extra-point attempts, punts, and kickoffs.

This means that if the ref calls the penalty on the offense, they receive an extra 10 yards and cancels out whatever happens on that play, repeating the down.

If the holding occurs on 2nd-and-3, then play is automatically stopped. The offense then moves back 10 yards from the original line of scrimmage and repeats the down. The next play, then, will be 2nd-and-13.

The offense receives the full penalty distance only if they are at least double the 10 yards away from their own end zone.

Meaning, if the offense is within their own 20-yard-line, then the penalty yardage will instead be half the distance to their own goal line.

The defense, however, has the option to decline the call - which is sometimes done, depending on the situation.

If, for example, the infraction occurs on 3rd down on an incomplete pass, the defense may decline the penalty.

This instead leads to the incomplete pass, resulting in a fourth down, forcing the offense to punt. 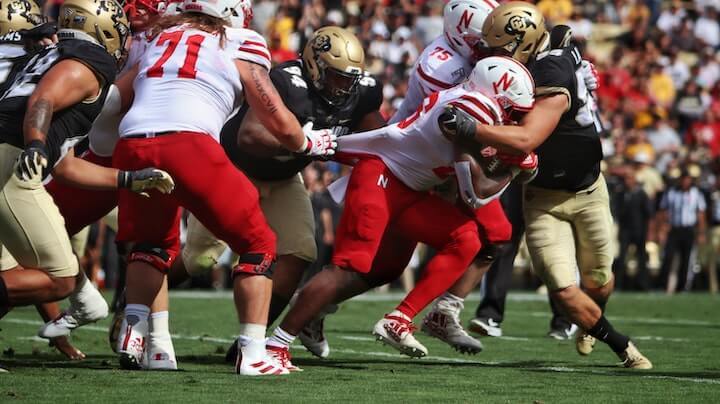 Defensive and offensive holding have the exact same definition, except for a few variations.

Because contact with players near the line of scrimmage is part of the game, referees give defenders a bit of leeway when it comes to holding.

Defensive holding cannot be called within five yards of the line of scrimmage.

Any infraction outside of this zone, however, results in a penalty.

Defensive holding typically occurs when defenders try to keep up with a receiver running downfield.

As they try to prevent wide open passes, defenders sometimes end up holding onto a receiver's jersey, arms, or shoulders.

While the infraction is the same, defensive holding results in different outcomes.

No matter what the game situation is, defensive holding results in a five-yard penalty.

The big difference is that this results in an automatic first down for the offense.

Defensive holding penalties can completely turn a game around when committed.

Even if, for example, the offense throws an incomplete pass on 3rd-and-24, they get an automatic first down if a defensive holding occurs.

Instead of a punt in this situation, the offense stays on the field and gets bailed out of a bad situation.

This is why it's very important to train players to avoid holding at all costs.

Offenses also have the option of declining a defensive holding penalty.

They may do so if they complete a long pass (of at least more than 5 yards) and gain a first down in the process.

Offensive and defensive holding are two of the most common penalties called in football.

Though common, they can also be the most devastating penalties called.

These penalties can completely change a drive for either side, resulting in a huge disadvantage for the penalized team.

That's why it's so important for coaches to teach their players what constitutes offensive and defensive holding, and how to avoid them altogether.