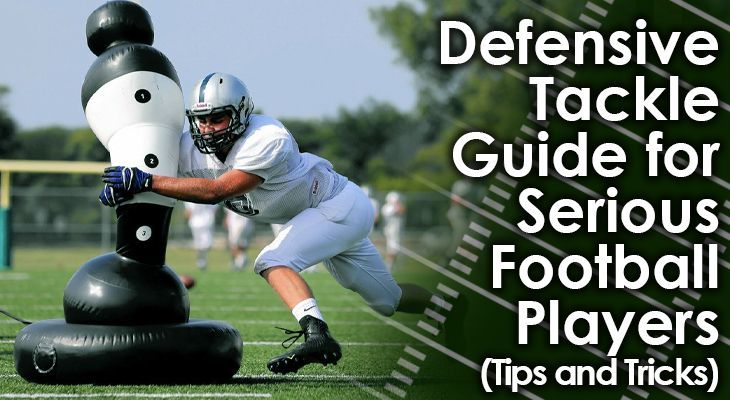 Defensive tackles are often the forgotten players along the line of scrimmage.

So much focus on the defensive side of the ball is put on applying pressure on the offense, and that all starts up front with the big men at the line.

But, much of the attention goes to the defensive ends.

Those players are the ones who rack up the stats in the categories that grab headlines.

Many people can name some of the most prolific defensive ends of all time, because they are the players who typically record the most sacks.

How many great defensive tackles can you name, though?

For people who play the position, it's quite alright that they don't get the notoriety in the public. They know how valuable they are to their team, and their coaches do, too.

Not every football player is a great fit to be a defensive tackle, though. It's a position that requires a lot of size and strength, but it also requires a player to be nimble and quick.

Let's take a look at all the aspects of what makes a great defensive tackle.

5 Traits of a Great Defensive Tackle

The reason defensive tackles need to be so large is because they must be immovable objects.

In other words, a defensive tackle needs to make it difficult for offensive linemen to move him where they want to.

One easy way to do that is to simply be big.

The heavier something is, the harder it is to move.

That's a pretty simple concept to understand, and that's why defensive tackles are often some of the heaviest players on the field -- on either side of the ball.

At the same time, defensive tackles need to be quick, too.

They need to put pressure on the offensive line by their movements -- not just by their physical stature.

Eventually, offensive linemen will be able to move a big object, but it's difficult for them to move one that is quick and moving around.

A lot of attention on the defensive side of the ball is given to speed. It's a trait that players in the secondary, linebackers and even defensive ends need to have to succeed.

For defensive tackles, it's more important to have quickness.

The first two steps that a defensive tackle takes after the ball is snapped are the most important to how the play goes.

These steps will determine whether he will be making his way through the line of scrimmage, whether a second offensive linemen will be required to help block him, or whether he'll be easy to block.

Tackles need to have superior quickness so they can be the ones initiating the first contact with offensive linemen, and not the other way around.

This will give them leverage throughout the entire play. Defensive tackles are lined up to the interior of the line of scrimmage.

They will often be taking on double-team blocks from offensive linemen -- either a combination of a center and guard, or a guard and offensive tackle.

Their job is to fight off these blocks, and attract as much attention from offensive linemen as possible, so as to free up other players to roam around on the field.

The way they do this is by using their arms and hands.

They need to keep offensive linemen away from their bodies.

If they can maintain space between them and the blocker, then they'll be able to succeed in pushing the line into the backfield.

If they can't, then they'll be much more susceptible to being pushed back.

This is why a lot of the individual drills that defensive tackles do in practice will be focused on swatting away blockers' hands and keeping that physical separation.

To do this successfully on a consistent basis, defensive tackles need to be very strong, especially in their arms and hands.

On every single play, a defensive tackle will be involved in high-impact contact.

There is simply no way around it.

He will be engaged in head-on collisions with offensive linemen on every play as they try to push him back and he tries to push them forward.

He'll also take a lot of contact from different angles.

Sometimes, he'll take on double-team blocks from the side.

Sometimes, he may be hit from behind as a linebacker is rushing to the line of scrimmage to plug a hole.

In many cases, defensive tackles will get tangled up in pile-ups around the ball.

As such, defensive tackles need to be durable, and be able to withstand all this physical contact.

If they can't, they won't be able to contribute to their team by staying on the field play after play.

5. Defensive Tackles are Consistent and Focused

Defensive tackles must be reliable.

The defense will rely on them to put pressure on the offensive line on every play.

They can't afford to take even one play off, otherwise the offense could be in for a huge play.

It's a heck of a lot to ask a player, to constantly give 100% when they're being physically battered and exhausted.

But it's so important. It's what separates defensive tackles from other players.

They need to be determined to succeed on each and every play, no questions asked.

A defensive tackle has a wide range of roles and responsibilities.

In order for a defensive tackle to be successful, he must be the aggressor in the contact.

He needs to have great anticipation and vision in order to time the snap of the ball just right, so that he can get off the ball with explosive power right away.

If he's able to do this, he will be putting the pressure on the offensive linemen to react to his movements.

It may seem odd, but defensive tackles need to play offense, rather than playing defense, in a sense.

He needs to approach every play as if he's the one attacking, and not the other way around.

2. He Must Attract Attention

A defensive tackle's primary responsibility is to attract attention from as many offensive linemen as possible.

The more offensive linemen he is occupying, the more free space there will be for other defenders to roam free and make plays.

This won't get a defensive tackle noticed in headlines or on the stat sheet.

What it will do is allow other players to do just that.

No linebacker will be able to make plays if he is gobbled up by an offensive lineman that was able to get to the second level because a defensive tackle was easily blocked by just one person.

The way that a defensive tackle attracts attention is by being disruptive, by bursting through the line of scrimmage, by being quick off the ball and hard to move.

Ultimately, if a defensive tackle is living up to all his traits, he'll require the attention of two blockers on every play.

3. He Must Fill Holes

At some point during the play, a defensive tackle will need to ultimately shed blocks to try to make a play.

He won't often make a tackle or sack, but it'll be necessary for him to pursue ball carriers or force them to other areas of the field.

On most plays, a defensive tackle will be assigned a gap along the line of scrimmage to fill.

His primary responsibility will be to plug that gap any way he can. He cannot be moved away from that gap, otherwise, there will be open running room.

So, first he must plug that gap.

Then, he must have the vision and awareness to see the play as it's developing to see whether he must shed the block and run to a different part of the field for support.

3 Tips for a Defensive Tackle

Here are some tips for players who want to be a good defensive tackle:

The feet are so important for a defensive tackle if he wants to be quick.

Unlike some other players at different positions, defensive tackles don't need to work on sprinting and getting fast on a straight-line basis.

They do, however, need to make sure that they are quick off the ball.

The best way to do this is to work on footwork drills.

This includes shuffling, backpedaling and other ladder drills.

Defensive coaches will integrate these drills into practice.

The second skill defensive tackles need to acquire is the ability to swat away blockers' hands and arms -- to keep that spacing between them that we were talking about before.

In a way, this is a little bit like martial arts.

They'll need to use their hands to swat away the hands of the blocker.

This is such an important skill to acquire.

A defensive tackle can be big, strong and quick, but if a blocker is able to get his hands on the tackle's body, then he'll be able to gain the leverage necessary to move him off his path.

Defensive tackles will often be attacking and moving through the line of scrimmage at angles that are not very natural.

They will start low to the ground in a three-point stance, and they need to try to keep low throughout the entire play to gain this leverage.

They need to twist and turn their bodies at different angles.

And they must do all of this without injuring themselves.

That's why stretching is very important for defensive tackles.

Working with a coach who can help them stretch, as well as working with elastic bands to stay flexible is key. A great defensive tackle can completely change the outcome of a game.

They don't often appear on the stat sheet or in headlines, but what they do allows other players on the defense to shine.

If a defensive tackle is able to do their job properly, then defensive ends and linebackers will be able to have a field day causing havoc for the offense.

Not every player can be a defensive tackle.

The position takes a combination of size, strength, quickness and flexibility that is hard to teach.

If you have this size and the mental toughness to handle it, defensive tackle can be one of the most rewarding defensive positions to play.