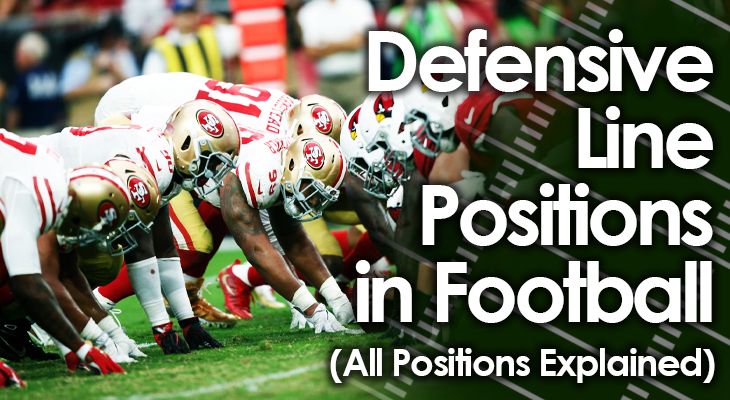 The defensive line consists of the "big boys" upfront.

These are the players who line up right at the line of scrimmage, directly across the offensive linemen.

Defensive linemen are the defenders closest to the ball and are responsible for clogging up holes along the line of scrimmage.

While their job isn't always to make a tackle, they do play a huge role in how the defense, as a unit, makes tackles and big plays.

Below, we'll dive deeper into all of the defensive line positions in football, what they do, what types of players occupy each position, and how they differ from one another.

There are two main defensive line positions in football.

(Though in recent years, there have become two other "sub-positions" some teams use, which we'll discuss soon)

The two base positions are:

The other two "sub-positions" are the nose tackles and the edge rushers.

While not every team use these sub positions, all will use some form of defensive tackles and defensive ends.

How many of these defensive line positions are on the field at one time depends on what type of base defense the team runs.

In a 3-4 defensive alignment, the typical breakdown is one defensive tackle and two defensive ends, though there is some more flexibility in positions here.

In most cases, two defensive tackles are on the field at any one time.

Other teams make use of a weakside and a strongside defensive tackle, which would require the players swapping sides of the field depending on where the tight end lines up.

Defensive tackles are typically the biggest-bodied defenders on the field to take on the interior of the offensive line.

They often find themselves double-teamed against offensive linemen as this is where a lot of runs will go.

Defensive tackles will usually line up somewhere over the offensive guard -- either straight on or over one of his shoulders.

Because of this, defensive tackles are typically responsible for rushing through either the A Gap or the B Gap.

Their assignment for each play will be called out in the huddle, and can change depending on what the coach is trying to accomplish on that play.

The main job of a defensive tackle is to clog up running lanes in the interior of the offensive line.

By doing this, they allow linebackers, and even safeties, to get free of blockers and make open tackles on ball carriers.

Against the pass, defensive tackles are responsible for getting into the backfield as quickly as possible to cause disruption.

While defensive tackles traditionally don't register the biggest sack numbers, if they are able to get into the backfield successfully, they can create sacks for defensive ends and linebackers, as the quarterback scrambles out of the middle of the pocket.

A solid defensive tackle can be game-changing.

Some of the best of all time -- including Warren Sapp -- could literally stop an offense seemingly by himself. 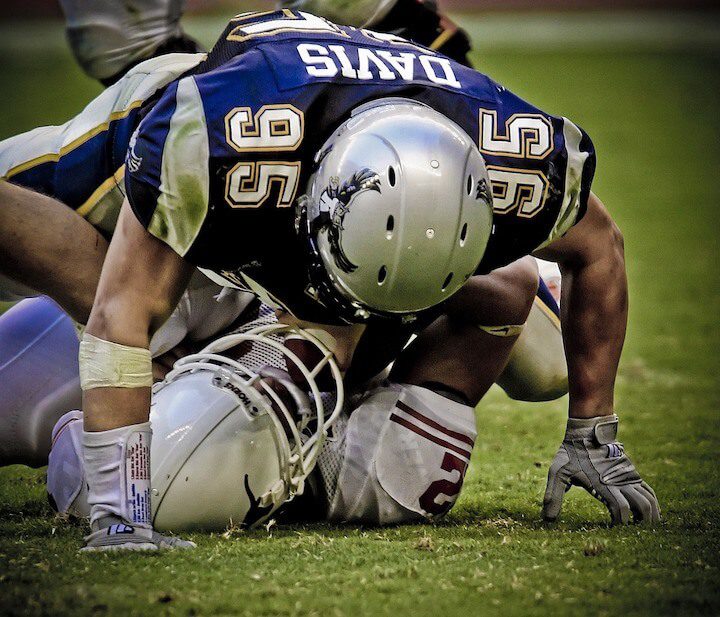 Nose tackles are essentially a type of defensive tackle.

It's not a separate position in its own right, but rather a more specialized version of a defensive tackle.

Players who man this position are even larger than traditional defensive tackles and, as a result, are much more useful against the run than they are against the pass.

Their main job is to clog up the direct interior of the field, taking on as many blockers as they possibly can.

While nose tackles will have the same role in the passing game, they're even less likely to record sacks as they're less quick and nimble.

Nose tackles will often line up directly over the head of the center or shaded to one of his shoulders.

Sometimes the nose tackle will line up on the inside shoulder of one of the guards, but it'll always be somewhere in this narrow part of the field.

This makes a nose tackle's responsibility the A Gap all the time.

While some defenses will opt to use a nose tackle seemingly all the time, some won't ever use one.

However, most will utilize a nose tackle in specific situations -- mainly short-yardage or goal-line situations for the offense.

The other core defensive line position is the Defensive End.

Defensive ends line up further outside of the line of scrimmage.

They're still big players, but are typically smaller than defensive tackles.

The main attribute that separates them from defensive tackles is the fact that they're very quick, nimble, and athletic.

Defensive ends need this athleticism as they'll often face off against big offensive tackles -- usually the largest players on the offensive line.

Because of the size difference, defensive ends must focus on avoiding blocks -- rather than bursting through them, as defensive tackles do.

They'll do this by having a good stance, quick first step, by being fast, and by using good evasive moves such as swim moves, spin moves, and more.

In fact, in practice, defensive ends will work on these block-shedding moves maybe more so than any other one particular football skill.

These players will line up typically around the offensive tackle -- or possibly part of the tight end, if there is one on their side of the field.

This really depends on the defense's philosophy.

How Defensive Ends Line Up

Like defensive tackles, there could be a left and right defensive end, where the players stay on the same side of the field for every play.

Or, the defensive could deploy strongside and weakside ends, where the players swap based on how the offense lines up.

Either way, defensive ends will line up either heads up on the offensive tackle or across one of his shoulders.

He may line up on the inside of the tight end's shoulder, too, depending on the offensive alignment and play call.

Because of this alignment, the defensive end is typically responsible for B or C gap, depending on the play call.

On passing plays their job is to get into the backfield and cause as much disruption as they possibly can.

The coach literally lets them loose on passing plays, with the ultimate goal to sack the quarterback.

Some of the best defensive ends in history are sack specialists -- players such as Reggie White, Bruce Smith, Michael Strahan and JJ Watt.

While much of the attention paid to defensive ends is on how successful they rush the quarterback, they're crucial to the running game, too.

On running plays, their main responsibility is what's called "outside contain."

Their goal is to not let any ball carrier get to the outside of them.

The reason for this is that defensive ends are the last player along the line of scrimmage toward the sideline.

If a ball carrier is able to get outside of the defensive end and past him, then he will typically have a lot of running room.

Plus, these ball carriers will often face much smaller cornerbacks, safeties, and outside linebackers, who may have a tough time making solo tackles.

This doesn't mean that defensive ends must make every single tackle on their own when a ball carrier comes their way...

Instead, it means that if the defensive end CAN'T make the tackle, his job is to force the runner back toward the middle of the field.

Doing this successfully forces the ball carrier back to where majority of the defenders, increasing the chances of getting the tackle.

The defensive end can do this by simply shuffling outside and angling his body so the runner must try to cut back inside to avoid getting tackled.

The defensive end can never over-commit to a play.

Doing so puts him in a position to get juked himself, letting the runner get daylight to the outside of the field. 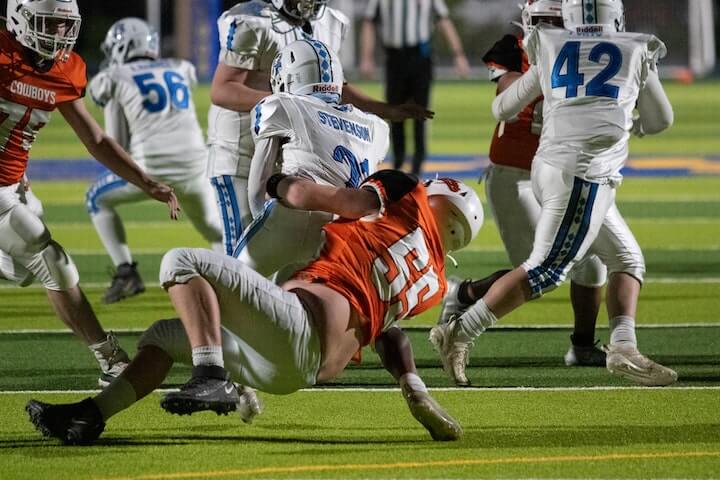 The edge rusher is a position used more and more in the upper levels of football today.

It's sort of a hybrid between a defensive end and an outside linebacker.

As such, he's not really a defensive end, though he can be considered a defensive lineman based on where he lines up.

These players will often start plays like linebackers do -- in a two-point stance rather than a three-point stance.

They'll line up to the outside of the line of scrimmage, with a good amount of distance between the offensive tackle.

Their job is simple: Get to the quarterback.

Edge rushers get a lot of attention nowadays -- and make a lot of money in the NFL -- because they are hugely impactful in the passing game.

Not every team will use an edge rusher, though -- who is essentially a pass-rushing specialist.

All players in defensive line positions are the big-bodied players.

They have to be, because they endure contact on literally every play.

Whether they make a tackle or not, defensive linemen are always making contact with an offensive lineman trying to block him.

At the same time, the most successful defensive linemen are quick, nimble, and athletic.

They must be durable and tough to withstand all that contact, but also must be elusive to get into the backfield -- especially defensive ends.

The best defensive linemen can impact both the running and passing games, which requires a wide set of skills.

What Numbers Do Defensive Linemen Wear?

All players filling defensive line positions wear numbers between 50 and 79, or 90 to 99. 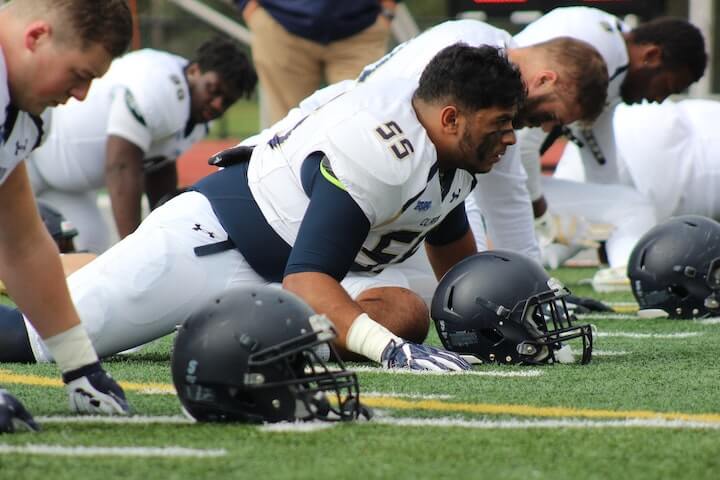 Defensive linemen are some of the most versatile, tough, and durable players on the football field.

They have to be, in order to endure contact on literally every play as they line up directly across big, bulking offensive linemen.

Defensive tackles and defensive ends are the two main defensive line positions, and these players have slightly different responsibilities.

Learning what each position does and how they can be successful is key to understanding how to construct the perfect defensive line in football.