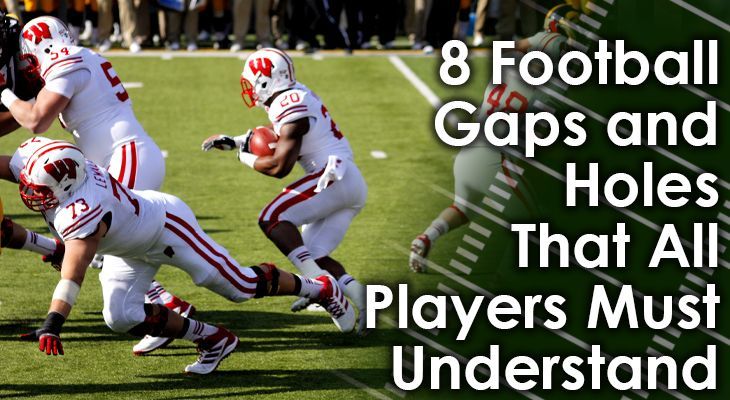 You may have heard this before, but everything in the game of football starts up front at the line of scrimmage.

It’s the point of attack – where the ball starts and where everything must go through on both offense and defense for a play to be successful.

Both offensive and defensive coaches come up with a number of schemes and plays to try to keep the other team off balance.

Offenses employ different blocking schemes that include zone blocking and having offensive linemen pull to one side or the other.

They run play-action passes, draws and counter runs to deceive the defense, making them think a play is going to one side of the field when it’s actually going the other.

They blitz linebackers, cornerbacks, and safeties to put extra pressure on the quarterback.

Even though there is a wide variety of techniques and plays that coaches use, it's all done with one simple thing in mind – to either open up (offense) or plug up (defense) the gaps and holes at the line of scrimmage.

Understanding what these gaps and holes are and how they're used in football terminology is essential for any football player as they try to carry out their duties on every play. 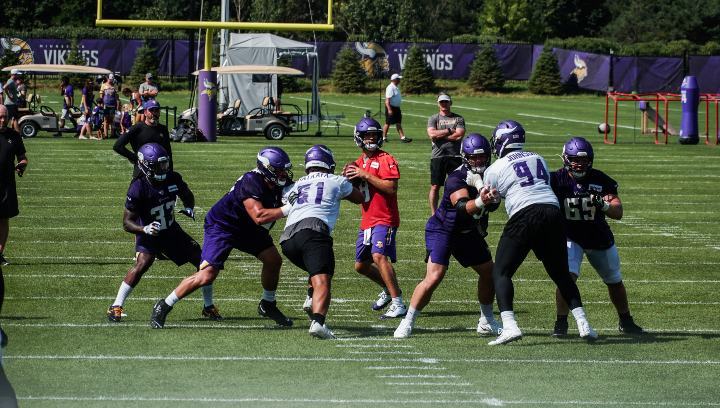 What Are Gaps and Holes?

Football gaps and holes are alphabetical and numerical symbols, respectively, given to each space along the line of scrimmage.

Offenses and defenses use these symbols to label the different gaps to simplify the process of understanding where a particular play is going, and where players will be responsible to block and/or go through.

By labeling each gap with a standard symbol, it's easier for players to understand the field.

This is especially important for two reasons:

(1) The number of players on both the offensive and defensive line can change on each play. It can also change from one team to the next.

(2) It’s a lot easier to say A gap than “the space to the left of the center and to the right of the guard,” for example.

The simplicity and standardization of the gaps and holes allows any football player, no matter what position he’s playing and no matter what team he’s on, to understand plays and responsibilities quickly and correctly.

Football gaps and holes are technically the same thing, as they refer to each of the spaces between two offensive linemen.

So, for example, the space between the center and the guard is a gap or hole.

The space between the guard and the offensive tackle is another gap or hole.

And so on and so on.

Gaps are what the defense calls these spaces between the offensive linemen.

To make things even simpler, the offensive line split down the middle, with the same letters assigned to the same gaps on each side of the line.

Here are each of the gaps:

A Gap: The space between the center and the offensive guard

C Gap: The space between the offensive tackle and the tight end

D Gap: The space on the outside shoulder of the tight end

Notice that we didn’t specify which side of the field we’re talking about.

That’s because there are two of each gap on each side of the field.

In other words, the space between the center and the offensive guard to the left and right side of the field are both referred to as the A gap.

Defenses can differentiate the specific A gap they’re referring to by calling one the strong-side and one the weak-side (or back-side) A gap. 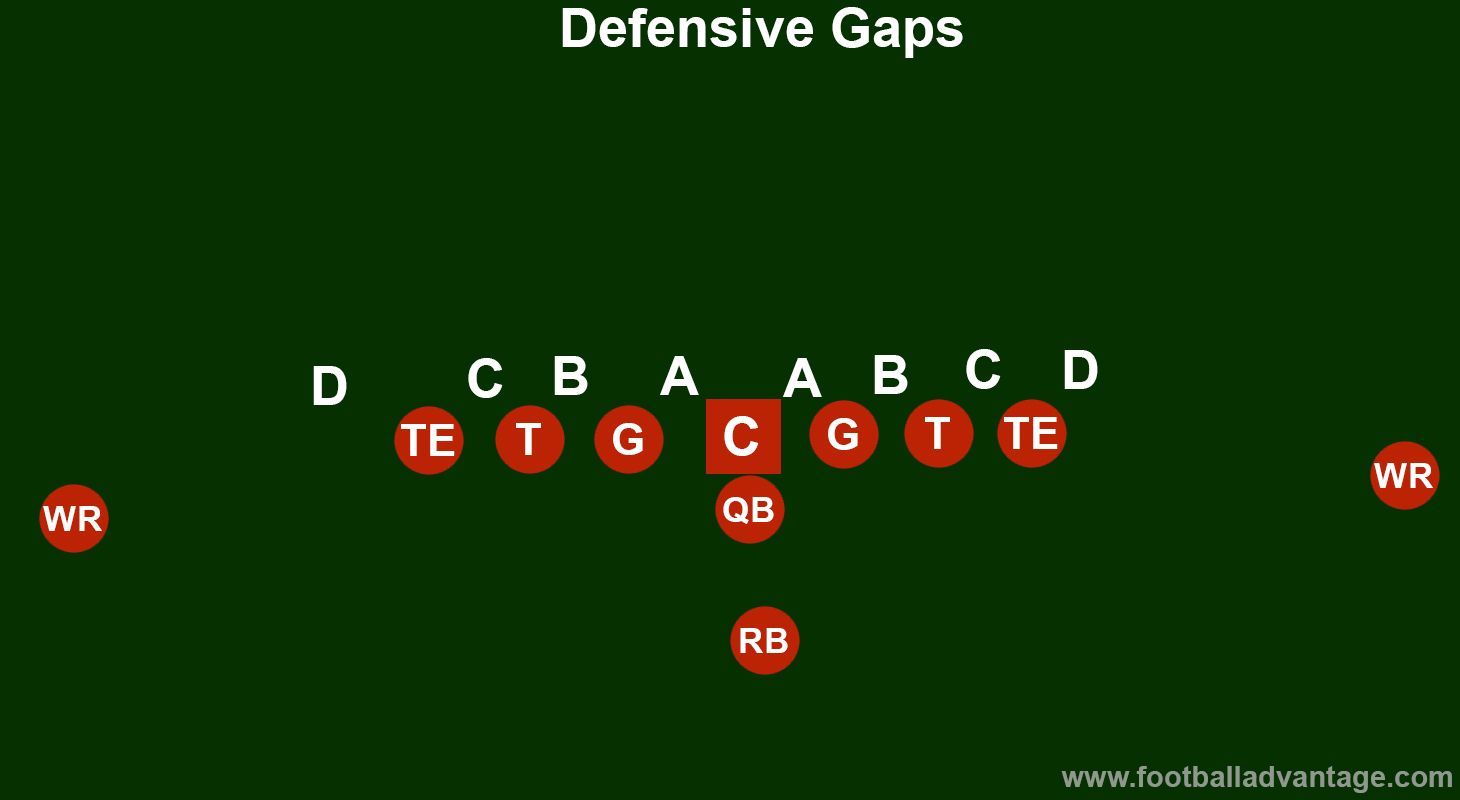 How Defenses Use Gaps

Defenses use the gaps to assign responsibilities to defensive linemen primarily.

On running plays, linebackers will have a specific gap assignment, and safeties can as well at times.

On passing plays, linebackers (and sometimes safeties) can also have gap assignments if they’re blitzing the quarterback.

When the defense lines up before the snap, the easiest thing to do is have all the players shoot through the gap that they are lined up opposite.

For example, if the nose tackle lines up shaded over the outside shoulder of the center, he would have A gap responsibilities on the side of the field where he’s shaded.

In a typical base defense, this is how all the defensive linemen would attack – pretty much straight ahead.

The linebackers would then fill in the remaining gaps along the offensive line on running plays, with safeties helping out on the D gaps if necessary.

One way coaches can change this up to keep offensive linemen guessing, though, is to run stunts.

There are 2 ways to do this:

A stunt would simply involve the defensive linemen going through the gap that’s opposite where he’s lined up.

In the above example with the nose tackle, that would mean he would attack the A gap on the opposite side of the field where he’s shaded. 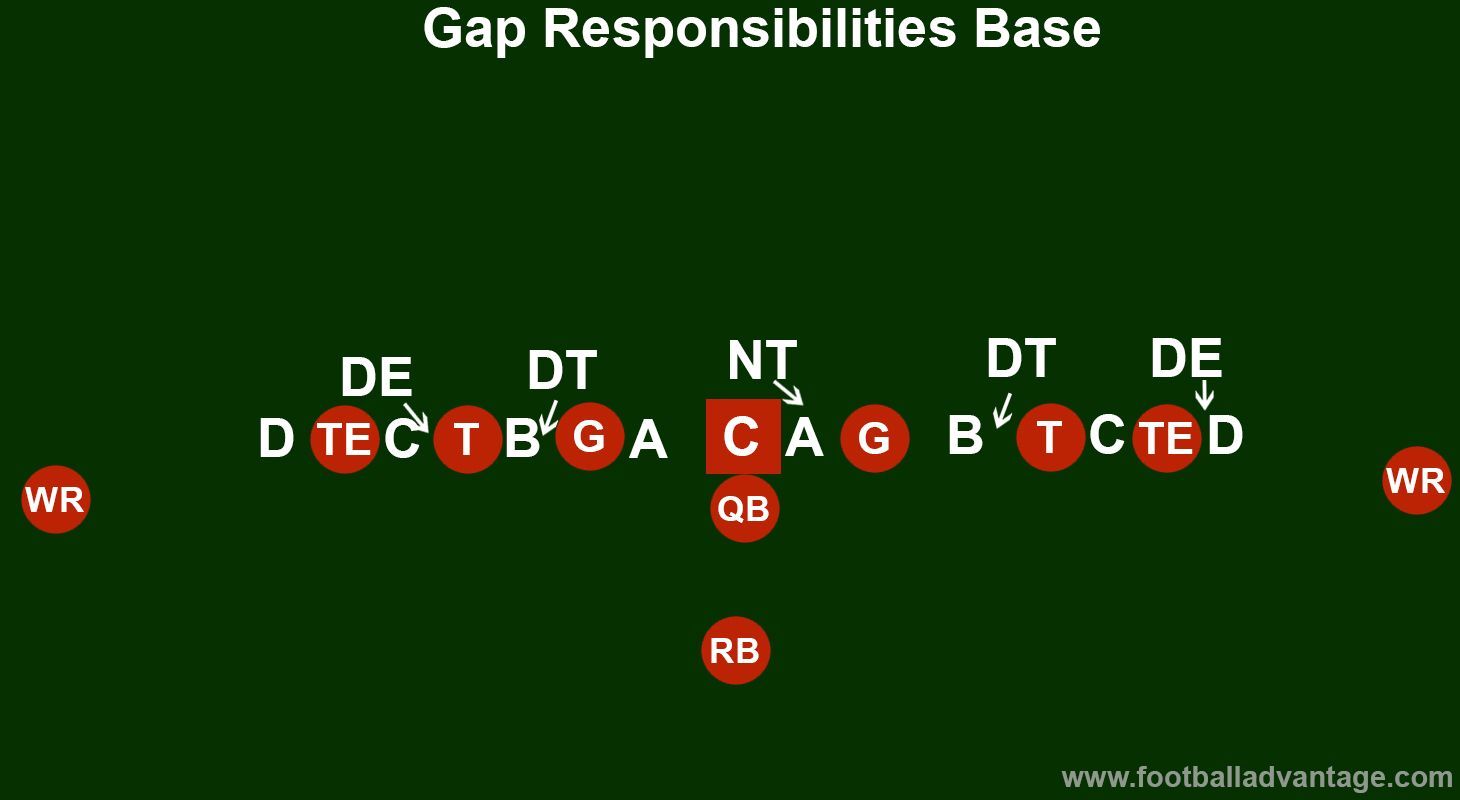 A stunt-and-pull is slightly more complicated.

On this play, instead of attacking the gap that’s straight ahead, one lineman “stunts” to the outside gap while the defensive lineman next to him loops behind him.

On this stunt-and-pull, the defensive tackle will angle out to the C gap.

The defensive end will pull or curl around behind the defensive tackle and attack the offense through the B gap. 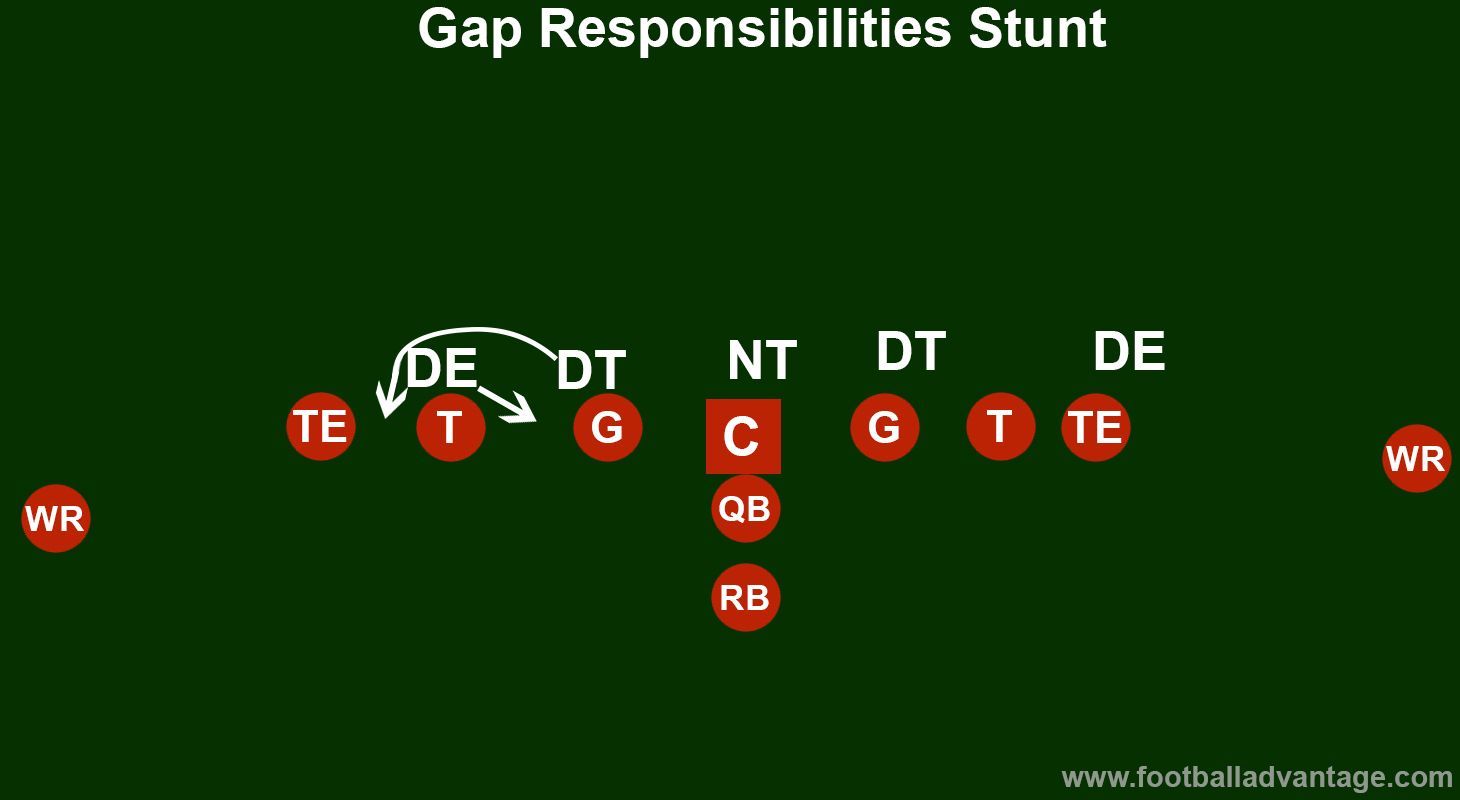 These little variations to the way the defense attacks the offense can happen on just one side of the line or on both sides of the line simultaneously as well.

How Offenses Use Holes

Just like the defense uses gaps to label the spacing between offensive linemen, the offense uses holes to do the same.

Instead of letters, though, the offense uses numbers to label each of these spaces.

In addition, they alternate from left to right when they label.

Here are each of the holes:

1: The space between the center and the offensive guard to the left

2: The space between the center and the offensive guard to the right

3: The space between the guard and the offensive tackle to the left

4: The space between the guard and the offensive tackle to the right

5: The space between the offensive tackle and the tight end to the left

6: The space between the offensive tackle and the tight end to the right

7: The space to the outside of the tight end to the left

8: The space to the outside of the tight end to the right

Each of these holes will correspond to a defense’s gaps, of course.

The terms are interchangeable, then, but the offense uses a different number for each space to make it easier for backs to understand and identify the part of the field that they’re running to. 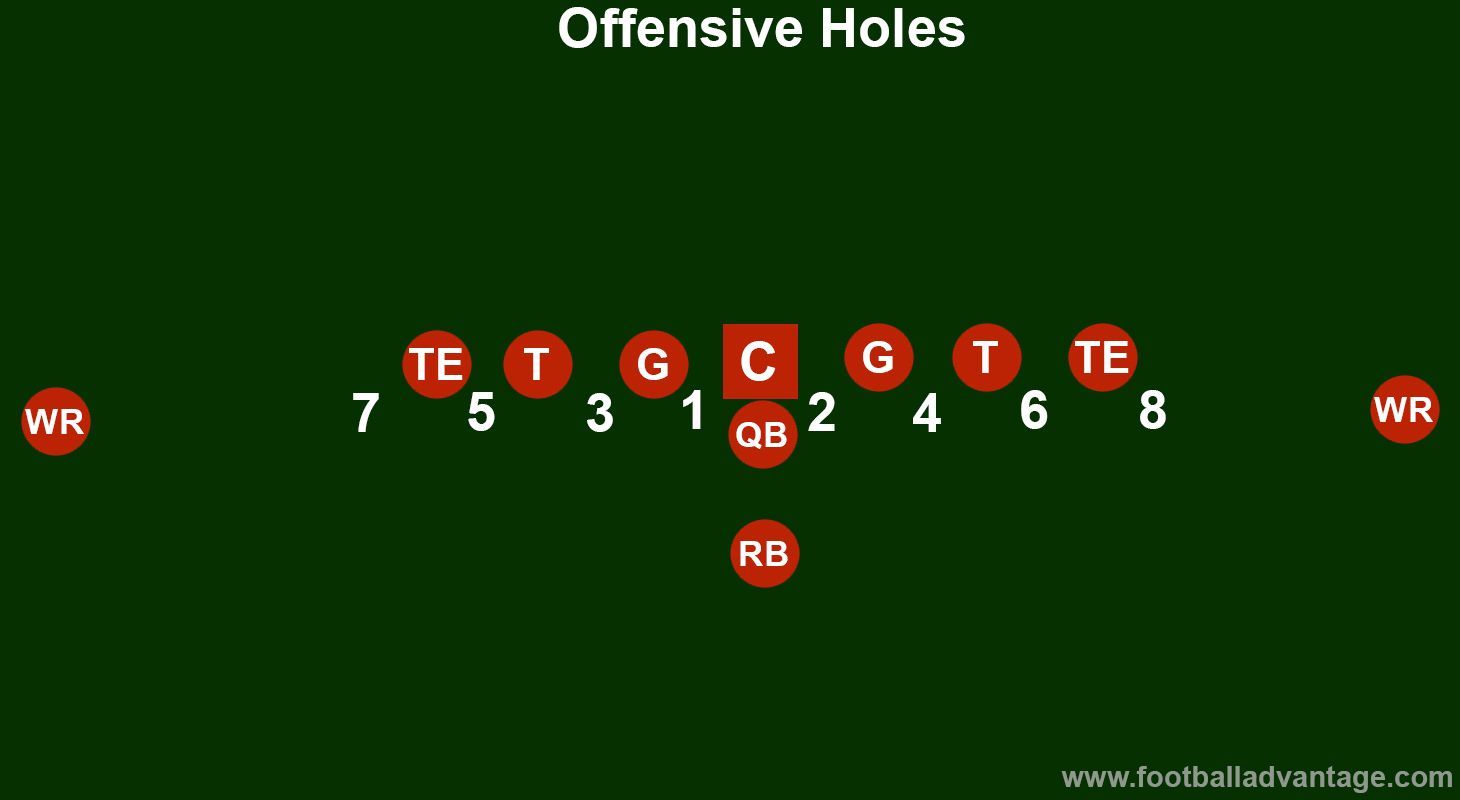 Offenses use the holes a little differently than defenses use gaps.

Offenses don’t use the holes to signify where offensive linemen will block.

The blocking assignments are done on a man-to-man or zone basis.

Offensive linemen don’t pay attention to the holes when they're blocking.

In fact, they’ll often refer to their assignments based on what gaps the defenders are lined up across from and which ones they attack.

What they do, though, is open up space in these holes for ball carriers to run through.

On each standard running play, the running back will have a hole that he’s assigned to run through after taking the hand-off. His first move will be toward that hole on the field.

He, of course, has the leeway to make cutbacks or go through a different hole if the one that he’s assigned to run through isn’t open when he approaches it.

For example, the running back may be assigned to run through the 1 hole. If that hole didn’t open up, though – if a defender plugged it – then the running back can adjust and go through another hole that he sees is open.

The holes are also used to identify blocking assignments for backs during passing plays.

On passes where the running back doesn’t run a route, he will stay in and be responsible mostly for blocking the first defender who breaks through the line of scrimmage.

However, he will be asked to primarily concentrate on a few holes, depending on the play called on offense and the alignment of the defense.

To make understanding blocking, running and attacking assignments easier, coaches have labeled spacing between offensive linemen along the line of scrimmage.

This standardization allows players to easily identify their roles and responsibilities on each play, no matter what looks the offense or defense gives them.

The defense calls these spaces gaps and labels them with letters.

The offense calls these spaces holes and labels them with numbers.

Either way, though, they refer to the same thing and are used in similar ways.