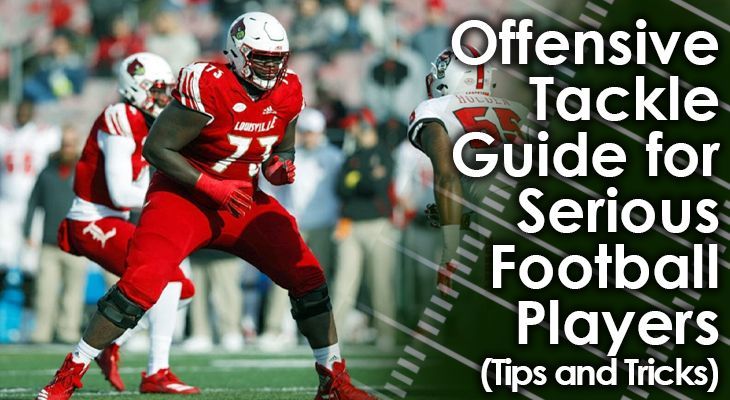 Tackles are incredibly important because they protect the outside of the line of scrimmage. They have to match up against some of the fastest and most skilled defensive players as well -- defensive ends, outside linebackers and sometimes even blitzing safeties.

Offensive tackles protect the blind side of the quarterback.

This makes the tackle's job even more important, as he's protecting the health and well-being of one of the offense's most important players.

One missed block or assignment by an offensive tackle can lead to a big negative play for the offense, at best, and a potential bad injury to the quarterback, at worst.

Let's take a look at all the aspects of what makes a great offensive tackle.

5 Traits of a Great Offensive Tackle

1. Offensive Tackles are Big and Tall

They are far and away the largest players on the field at all times.

One of the greatest offensive tackles of all time, Jonathan Ogden, was 6 feet 9 inches tall and weighed almost 350 pounds when he played for the Baltimore Ravens.

The reason why offensive tackles must have this enormous size is because it makes them very hard to move around.

The weight makes it difficult for smaller defensive ends and outside linebackers to power through, forcing them to try to beat them to one side or the other.

The height spreads out their weight and makes it harder to knock them off balance.

While offensive tackles can still be successful without being as big as Ogden, they do need to have a fairly large size advantage over the ends and linebackers they will often be responsible for blocking.

Simply being big isn't enough, though.

Defensive ends and outside linebackers can counter the huge size of offensive tackles by using their quickness and speed to get around them before they can be blocked.

That's why it's so important that offensive tackles are very athletic, too.

They certainly won't be the fastest players on the field, but they need to be able to move that huge frame back and forth, and side to side.

They need to be able to wall off the rushing ends and linebackers, especially on passing plays.

And the only way they'll be able to do that is if they have superior quickness, outstanding balance and excellent athleticism. In order to be successful, offensive tackles can sit back and let the play come to them. They need to be aggressive and attack.

This can be one of the toughest things to teach a young player who is learning the game. That's because they might fear that if they are aggressive and try to attack, they could easily miss a block, which would result in a big negative play.

This is true in one sense, but it doesn't mean offensive tackles shouldn't be aggressive…

It just means they should be smart with when, and how, they display their aggression.

After all, they're working in what's known as "the trenches" up front at the line of scrimmage. The only way for them to be able to absorb this is if they are tough.

This isn't just a physical trait that offensive tackles have to have, though.

They need to be as mentally tough as they are physically tough -- if not more so.

It's much easier to be physically tough than it is to be mentally tough.

But, being mentally tough is so key to being a successful offensive tackle, because it's what will allow these players to keep exerting the effort and taking the contact that is necessary play after play.

Offensive tackles need to be the leaders among the offensive line, leading by example -- delivering blows and taking them over and over again.

This can be draining not only from a physical standpoint but from a mental one as well.

That's why they need to be so tough to get up and do it again.

It takes much more than just size and physicality to succeed as an offensive tackle.

In addition to being mentally tough, tackles need to be exceptionally intelligent.

They need to be able to read defenses to understand which players may be rushing off the edge.

They need to be able to understand down-and-distances, and tendencies that defenses have in those situations.

Playing offensive tackle, in this regard, is a lot like playing quarterback.

From the moment he lines up in his stance, an offensive tackle must scan the field quickly to identify the defensive alignment.

What he's doing here is trying to identify not only his primary blocking responsibility, but what other defenders might come his way in a complicated blitz scheme.

The offensive tackle has the responsibility of calling out to other offensive linemen what he sees before the snap.

Then, he must adjust on the fly after the snap -- constantly keeping his eyes peeled on the entire defense as he's blocking the man right in front of him.

An offensive tackle has a wide range of roles and responsibilities.

1. He Must be a Great Pass Blocker

Offensive tackles' most important job is to protect the quarterback on passing plays.

This isn't to say that they don't play an important role in the running game (more on that next)... it's just that their singular role in the passing game can either make or break a play all on its own.

If an offensive tackle misses a block on a passing play, it will often result in a sack.

It could result in the quarterback simply being forced to scramble outside of the pocket and throwing the ball away.

But it could also result in the quarterback throwing an interception because he's pressured, or fumbling if he is hit hard from the outside.

Hits that the quarterback takes from the outside can be some of the most devastating because he can't see them coming.

It's the offensive tackle's job to prevent this from happening -- especially if he's protecting the quarterback's blind side.

In addition to being the most important role an offensive tackle has, it's also the most difficult, as he'll be responsible for blocking very speedy and athletic defensive ends and outside linebackers.

This is a much larger challenge than a typical offensive guard faces on passing downs against defensive tackles.

2. He Must Create Holes in the Running Game

An offensive tackle's job on running plays is equally as important, of course.

It's just that if he misses a block in the running game, it usually just means a loss of yardage -- and not a potential devastating injury to another offensive player.

On running plays, the offensive tackle is the player responsible for opening up holes toward the outside of the line.

This, too, can be rather challenging, because he'll often be asked to block the defensive end, which is no easy task in itself.

More so than that, though, he'll sometimes be asked to push the end to his left and sometimes to his right.

This can be quite difficult to do, as it requires him to have a very quick first step so that he can "hook" the end one way or the other.

3. He Must Keep "Outside Contain"

The phrase "outside contain" is often used when talking about defensive ends, not offensive tackles.

It explains the end's primary responsibility of not allowing ball carriers to get outside of him; they must instead try to force the play back inside if they can't make the tackle themselves.

From the offensive tackle's perspective, though, "outside contain" still applies.

The tackle must not let any defender get through the outside of the offensive line -- whether that be through the C gap to his inside or the D gap to his outside.

The only exception to his rule is if the defender decides to take such a wide path outside that he takes himself completely out of the play.

In those cases, the offensive tackle doesn't have to worry about keeping this outside contain.

3 Tips for an Offensive Tackle

Here are some tips for players who want to be a good offensive tackle:

For an offensive tackle to be able to keep up with speedy defensive ends and outside linebackers, he must have excellent footwork.

When he's pass blocking, a lot of what he will do will involve his feet and not his arms or hands.

He'll be shifting his feet from side to side, back and forth, to shield the defender away from the quarterback.

While he'll be using his arms for balance and to direct the defender's where he wants them to go, the key to being able to do that is his footwork.

An offensive tackle must have an extremely quick first step.

But he also must be able to recover very quickly with quick steps if he somehow falls a step behind the defender.

2. Work on Your Balance

Strength, quickness and footwork are all extremely important traits and skills that offensive tackles need to acquire.

But none of that will matter if they don't have good balance.

While defensive ends and outside linebackers have a primary advantage over offensive tackles with their speed, it's not as if they aren't very strong, too.

If an offensive tackle isn't able to maintain great balance while he's moving around, it'll be very easy for one of these defenders to knock him off to the side or back onto the ground by using their exceptional strength.

Therefore, offensive tackles must constantly work on their balance.

They need to be able to keep themselves upright, with their shoulders square and in a strong position to attack no matter what direction they're moving in.

3. Become a Student of the Game

The only way that offensive tackles will be able to gain the knowledge that they need to be successful is to study the game.

It's a good idea for offensive tackles to establish a really good relationship with their quarterbacks.

Those two positions are the ones who will be trying to do the same thing -- learning and understanding the game as a whole, rather than just a single aspect of the game.

In order to do this, tackles must spend time with offensive and defensive coaches.

They need to watch plays, then dissect the plays to understand everything that's going on in that play. Offensive tackle is one of the most demanding and challenging positions in football.

It requires a player to be a very impressive physical specimen, while having athletic ability and skills that are typical of much smaller players.

Tackles are asked to protect a quarterback's blind side on passing plays, which is perhaps the toughest and most daunting task that any football player has.

If you have the size, strength, toughness and intelligence that it takes to play offensive tackle, you can become great by being a student of the game and understanding how it works much more than your individual roles.