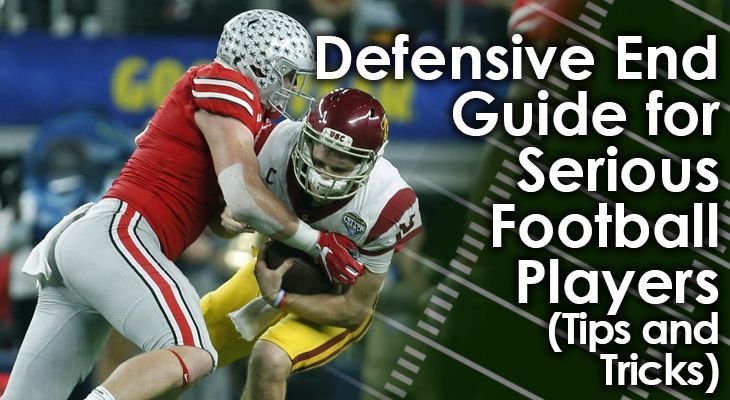 You might not think it, but defensive ends are some of the most athletically gifted players on a football field.

Many people would say that quarterbacks, running backs, and other "skill position" players on offense would take that title.

But Defensive ends have that rare combination of size and speed, to go along with excellent vision, great pursuit, and relentless will to make plays.

A great defensive end can completely change the outlook of a defense, and disrupt a game all by himself.

It's the reason NFL teams do not hesitate taking DE studs as the top pick in the NFL draft. In fact, in the last seven years, there have been five quarterbacks taken with the #1 pick in the NFL Draft.

The other two? Defensive ends.

But, what does it take to make a great defensive end? What are the necessary skills and traits needed?

Let's take a look at all the aspects of what makes a great defensive end.

5 Traits of All Great Defensive Ends

They will need to be athletic enough to elude burly offensive tackles and pursue quick, shifty running backs and quarterbacks.

DEs will be matched up against offensive tackles on almost every play.

These OTs are typically the largest offensive linemen, meaning the DEs will have quite the challenge taking them on -- or, better yet, avoiding them altogether.

They'll need quick feet to do this, as well as the ability to make moves and use their hands to break free from blockers.

DEs are also responsible for tracking down running backs who are trying to run to the outside. This will take the ability to shift courses and make quick lateral moves.

And finally, they'll need to pursue and put pressure on quarterbacks on passing plays.

They'll be facing a size and strength mismatch with OTs on every play.

The way they can beat the OTs is not just with their speed, but with great technique. Mastering these moves takes a lot of practice, of course, but it also takes a lot of studying.

Great DEs constantly perfect their craft, learn from others, and plan particular moves against specific OTs.

They learn this by watching lots of film and then putting what they see into practice.

Just about every position in football requires a player to have quick feet -- but, this is extremely important for DEs.

The only way defensive ends can be extremely successful is if they get a real quick burst as soon as the ball is snapped.

The first step for a DE is very important, as it can give them the upper hand on OTs right from the start.

Beyond getting off the ball quick, DEs have to be shifty too. Much like running backs, DEs have to constantly analyze what's happening in front of them.

They'll need to adjust their body positioning and running direction to compensate for what the offense throws at them.

Defensive ends are the "free roamers" of a defense.

Just about every other position will have more straightforward techniques for them to succeed.

DEs, meanwhile, will have more freedom to use different moves and go in different directions to get the job done.

Because of how they'll need to move their bodies, it's very important for DEs to be flexible.

They'll need to bend their bodies in somewhat awkward ways, while taking on blocks from OTs.

They'll also need to be able to duck down under blocks, or shift to the left and right to get around blocks.

This all will take quite a lot of flexibility.

Being flexible will allow DEs not only to accomplish what they need on every play, but also to avoid injuries.

What a defensive end does on a particular play depends on what's happening in front of him.

In order for him to do this well, he needs to have great vision.

Unlike defensive tackles, defensive ends have to look into the backfield to see what's going on. Then, they'll then need to adjust how they're attacking based on what's happening.

On passing plays, DEs can simply attack the quarterback straight on.

On running plays, DEs need to be a little more careful.

They have to keep outside contain, which forces them to get more depth and width on their attack.

On inside runs, they need to press down the line of scrimmage to tighten the box.

The only way that a DE can do this successfully is to have great vision.

He needs to be able to recognize what's going on while attacking at the same time.

Defensive ends don't have the luxury of being able to stand back and view the field, as linebackers or safeties do.

A defensive end has a wide range of roles and responsibilities.

1. He Must Keep Outside Contain

Outside contain means that a DE can't let any runner get to the outside of him.

While defensive ends aren't required to tackle every ball carrier coming his way, he needs to at least force them back inside where most of his fellow defenders are.

To do this, he has to make sure that he positions his body between the ball carrier and the sideline.

He has to shift laterally to the outside, forcing the ball carrier to go back inside.

Of course, DEs can attack ball carriers and make tackles on their own.

But overcommitting to this might open up the defense, allowing runners to get outside of them.

2. He Must Put Pressure in the Backfield

One of the primary responsibilities for a defensive end is to put pressure in the backfield.

This goes for both running and passing plays.

By getting into the backfield and disrupting the line of scrimmage, DEs can free up other defenders to make big tackles.

On running plays, this task goes to linebackers most of the time.

If DEs are able to gobble up OTs and maybe even guards, then there's plenty of space for linebackers to attack.

On passing plays, DEs need to be as disruptive as possible.

In the best-case scenario, DEs will rack up a lot of QB sacks and knock-downs.

3. He Must be a Complementary Player

While a defensive end can often stand out as the star on a defense, it's a position that also must be very complementary to other players.

He'll do this by keeping outside contain, for example. Another way is by putting pressure in the backfield, opening up space for other defenders.

Ultimately, a DE can be a complementary player by quickly recognizing the play and reacting appropriately.

By not over-committing to a pass or run, to a sack or tackle, DEs will always be staying in control.

That is really the key word for defensive ends -- control.

It can be easy for a DE to get out of control when they're rushing the quarterback.

If they see a sack, they go for it.

But if they over-commit, they could easily be fooled by a draw play, with the running back getting outside of them for a big gain.

3 Tips for a Defensive End

Here are some tips for players who want to be a good defensive end:

As mentioned before, it's very important for DEs to have great footwork.

They need to have agility, be quick, and be able to shift back and forth.

A great way to do that is to work on agility drills.

Anything that involves chopping feet, shifting body weight, and sprinting forward, backward, and sideways is a good idea.

Defensive ends need to build up this agility and continually work on it in practice every day.

A DE has to have strong hands, too.

They are constantly fighting away blocks by big, bulking OTs. They also need to get their hands up to deflect passes, and make tackles when needed.

To do all this, DEs need to have strong hands.

Weight lifting will help with this somewhat, but they should also work on handwork in practice.

Some defensive line drills include the Karate Drill and Wall Ball, where they can work on hand-eye coordination.

DEs need to understand how the game is played and how certain players on offense react on certain plays.

The best way to do that is to simply watch a lot of football.

It's simple for DEs to watch some great players at their position on TV.

There are loads of skilled DEs at the college and professional level who play every weekend.

In addition, DEs can study film with their coaches.

This allows them 1-on-1 coaching and breakdowns of plays in slow motion.

Defensive ends are part of the defensive line and are some of the most disruptive players on a defense.

Truly exceptional DEs can completely change a game around all on their own.

DE is not an easy position to play, though.

If you want to be a great defensive end, start by study some of the best players and then work hard to replicate what they do.