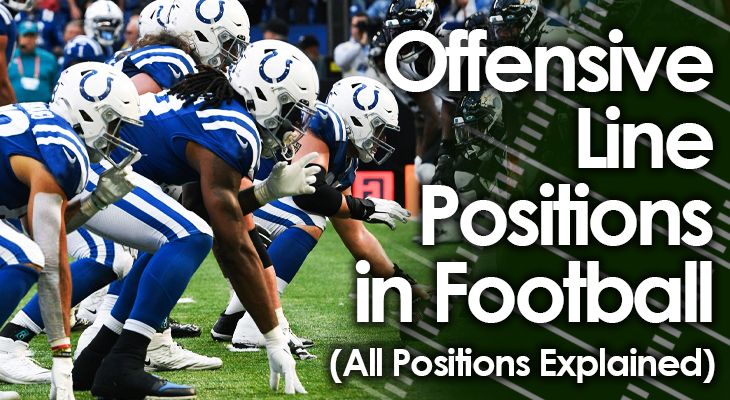 The offensive line is one of the most crucial personnel groupings in all of football.

The "big men" upfront have a huge effect on every offensive play in a game.

They're responsible for protecting the quarterback on passing plays, and for opening up huge holes in the running game so ball carriers can find daylight.

Without an effective offensive line your offense will have a difficult time getting anything accomplished!

That's why coaches pay so much attention to the offensive line, even if the position grouping doesn't get a lot of recognition by the general public.

In most cases, people pay more attention to quarterbacks and the other skilled position players such as running backs, wide receivers, and tight ends.

But, as the saying goes, "it all starts upfront" with the offensive line.

Those skilled position players wouldn't be able to do anything if it weren't for offensive linemen paving the way for them to do so.

Though they're all responsible for opening gaps and protecting the quarterback, there are slight differences to each of these positions.

Below, we'll dive further into all of the offensive line positions in football -- what they do, what types of players occupy each position, and how they differ from each other.

In football, the offensive line refers to all the players who line up at the interior of the line of scrimmage to start a play.

These players line up close to the football, and most will start the play in a three-point stance.

On every play, the offense will have at least five offensive linemen, which consists of:

Sometimes tight ends will be referred to as offensive linemen, if they line up tight to the line of scrimmage.

Since tight ends are eligible pass catchers on any play, they can sometimes line up wide in the formation, and they obviously have very different roles than most of the other offensive linemen.

Below, we'll detail each of the individual offensive line positions in football. 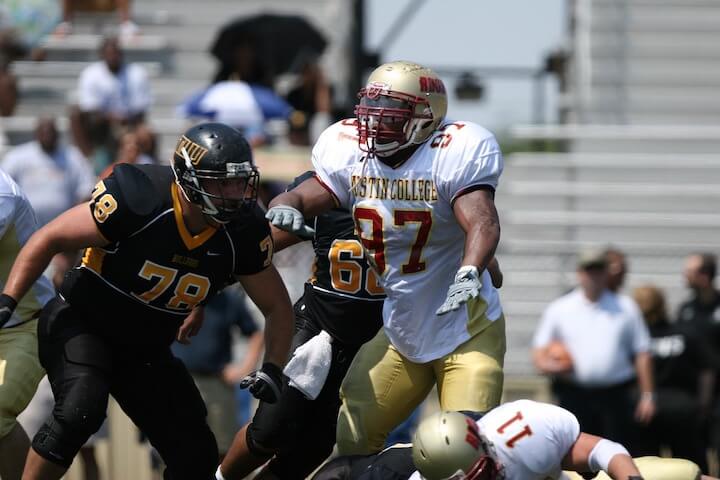 The center lines up in -- you guessed it -- the exact center of the play.

He lines up directly over the football on every play, with an offensive guard to his left and right.

Centers are responsible, first and foremost, for executing a proper and effective snap of the football to the quarterback.

Whether the quarterback lines up "under center" or in a shotgun formation, his first job on every play is to get the ball back to him consistently and effectively.

Before he does that, though, the center has one main responsibility...

To call out blocking assignments for other offensive linemen and to identify certain defensive players who may be blitzing.

As he approaches the line of scrimmage, and even after he hunches over the ball to get into position, the center must scan the field.

He's looking for where defensive players line up -- specifically the defensive linemen and linebackers -- to identify any players who might blitz.

The center will then call out that information to the other offensive linemen, who may not be able to see what the center sees because they have defensive linemen directly across from them.

The center will typically have two main blocking assignments:

The other main blocking assignment for the center is to chip on a defensive tackle if no one is lines up opposite him.

He will then shed that block to get to the second level of the defense to pick up a linebacker -- on running plays, of course.

Offensive guards line up to the left and the right of the center.

Guards will typically be a little bigger than centers, as they often have to deal with defensive tackles aligned directly over top of them or off to one of their shoulders.

At the same time, guards have always been the most athletic position on the offensive line.

There are two main reasons for this.

1. Usually cover the most ground

The first is that they are required on most running plays to cover the most ground to get to their blocking assignments.

They will often "chip" block a defensive tackle or even defensive end right after the snap, and then serve as a lead blocker of sorts, picking up linebackers in the middle of the field.

2. Pull more than any other position

The second reason is that guards often have to pull more than any other position.

This happens when the guard runs laterally down the line to the other side of the field, and picks up a defender there to block, instead of blocking straight ahead.

Offensive coaches call these plays as a misdirection, to throw off defensive players accustomed to taking on blocks from straight ahead.

Both of these responsibilities require the guards to have solid quickness and speed, especially relative for how big they are.

Guards must also be explosive and very powerful, as they often take on defenders who have a full head of steam coming at them, as opposed to a down defensive linemen who burst out of a three-point stance. 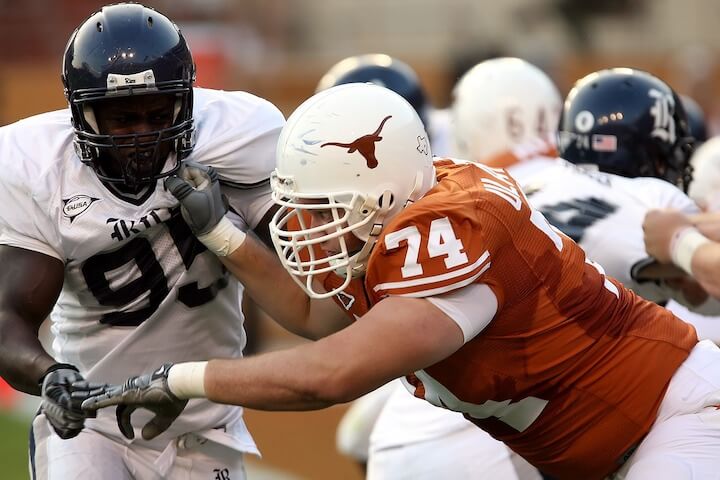 Offensive tackles will line up to the outside of the line of scrimmage, to the left or right of the offensive guards.

Offensive tackles are typically the largest of all offensive linemen, and they also have an extremely tough job.

Despite their massive size, offensive tackles must be able to move well with their feet, especially side to side.

They need this agility as they are responsible for blocking the defense's best pass rusher on passing plays, and are also the key to success in the outside running game.

One of the most challenging parts of a tackle's job is having to line up so far away from the football.

This means he has to look far inside to see the snap, then quickly face his head forward and pick up his blocking assignments.

On running plays, the tackles are often responsible for sealing off the outside of the line of scrimmage.

This requires the tackle to "hook" the defensive end and make sure he doesn't get to the outside, allowing a ball carrier to get to his outside and into open space.

These are either defensive ends or outside linebackers, both of whom are not only big and strong but extremely fast.

This is a main reason why some offensive tackles will start each play in a two-point stance rather than the traditional three-point stance.

It gives them a little bit of a head start to pick up these rushing defenders.

Offensive tackles are also responsible for protecting the quarterback's blind side.

Because of their importance in keeping quarterbacks safe, tackles are often the most valuable offensive linemen — and are paid the most in the NFL as a result.

Tight ends are sometimes referred to as offensive linemen, because many of them align themselves tight to the line of scrimmage.

When they do, they will line up to the outside of the offensive tackles.

When there's one tight end on the field, he will switch sides depending on the offensive play called. This forces the defense to adjust their personnel and keeps them guessing.

In obvious running plays, there might be two tight ends lined up on the field, one on each side of the offensive tackles.

Tight ends also may line up wide to the formation at times, in the "slot" between the outside wide receiver and the offensive tackle.

This is usually done in more obvious passing situations as it can create more mismatches in the passing game.

While much of the focus on tight ends is given to their ability to run routes and catch passes, they must also be solid blockers as well if they want to be considered elite at their position.

When they block, they'll often help chip on defensive ends, and pick up outside defenders such as outside linebackers, safeties, and sometimes even blitzing cornerbacks.

When tight ends run passing routes, they will often need to disguise the fact that they are doing so.

At the snap, they will sometimes chip block so that the defense thinks they are staying in.

They will then release off the block, allowing the defender to go free, so that they can run a passing route.

Offensive linemen are always the biggest players on the field.

In the NFL and other top levels of the game, offensive linemen typically weigh around 300 pounds or even more.

Some offensive tackles in today's NFL weigh as much as 350 pounds or more -- and are tall, too.

These offensive linemen aren't just big, though… they're extremely strong, as well.

Most at the upper levels of the game can bench press more than 500 pounds!

They aren't fast compared to the skilled position players, of course, but they can hold their own.

What Numbers Do Offensive Linemen Wear?

Each position grouping should wear numbers within a certain range.

This helps referees quickly identify which position each person on the field plays.

This helps them make decisions on penalty calls such as ineligible man downfield or illegal touching.

All offensive linemen wear a number that ranges from 50 through 79.

These numbers tell officials in the game that these players are not allowed to catch a pass -- except in rare situations in which one of the tackles may be eligible to catch a pass. 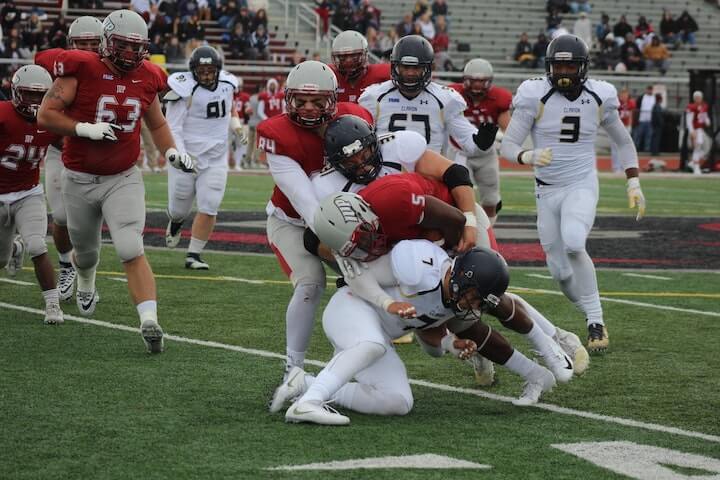 The offensive line is one of the most important position groupings in all of football.

While the entire unit holds the same basic responsibilities and fall into a similar category in terms of size and skills, each of the offensive line positions has its own unique set of descriptions.

These small nuances that each offensive line position brings to the table is what separates one from the next.

Doing these effectively is very important for the unit to be able to work together as one cohesive group.