What is the Line of Scrimmage in Football? (Full Explanation) 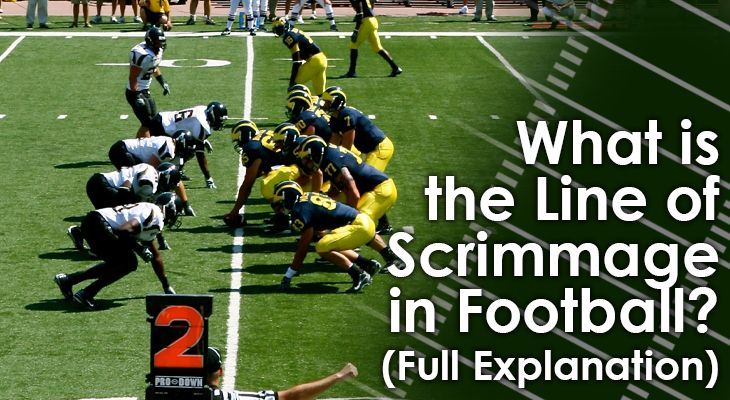 You’ll often hear announcers on live TV talk about the line of scrimmage.

But just what is the line of scrimmage exactly, and what's its relevance and what are the rules surrounding it?

These are all concepts that players must understand when learning to play football.

The line of scrimmage is where everything starts for every play, yet it keeps moving after each play.

It dictates where the ball should be prior to the snap and where players should line up on both offense and defense.

Let's further breakdown the line of scrimmage and how it relates to all players on the field.

What is the Line of Scrimmage?

The line of scrimmage is the spot on the field that shows where the ball is placed.

Before every snap, it changes based on what happens in the previous play.

Let's say the line of scrimmage is the offense's 10-yard line, and the offense gains five yards on a play.

The new line becomes the offense's own 15-yard line.

It's actually an imaginary line and not physically drawn on the field.

It extends from sideline to sideline at the point at which the ball is placed.

This is very important, as it serves as a barrier for the offense and the defense.

It also dictates who needs to line up where, and what can and can't happen on both sides of the ball.

While the line starts where the ball is lined up, the length of the ball itself represents what's known as the 'neutral zone'.

The only player who's allowed to line up in the neutral zone before the snap of the ball is the center.

This is because he'll be over top of the ball to snap it -- no other player can have any part of their body in this neutral zone. 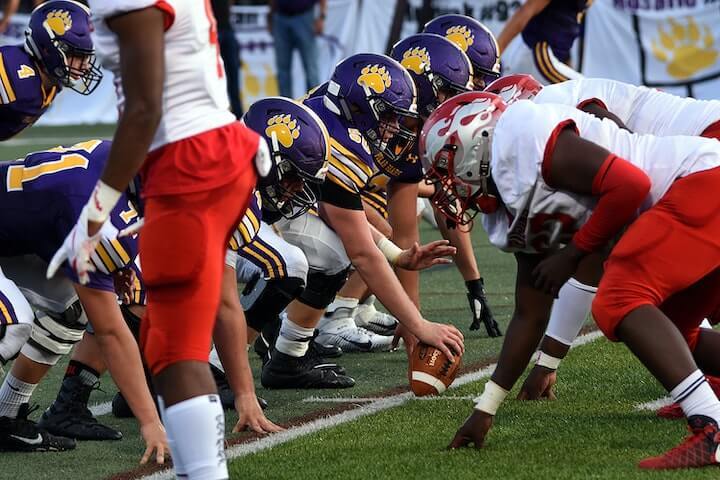 The Offense and the Line of Scrimmage

The line of scrimmage not only determines where the offense will start, but also where players align themselves prior to the play.

At all times, the offense must have seven players aligned at the line of scrimmage.

Two of these players must be receivers who are eligible to catch a pass.

On almost all downs, an offense will have at least five offensive linemen -- a center, two guards and two tackles.

That leaves two more players who line up at the line -- and both must be eligible receivers in this case.

The offense can determine the combination of these two players individually.

They can choose to play two tight ends, two wide receivers, or some combination of both.

If one of these additional players is a traditional offensive linemen, they'll need to be eligible to run a route and receive a pass.

After those seven players, the offense will have four more players, all of whom must line up off the line, or in the backfield.

This again can be any combination of players.

It can be multiple running backs, wing backs or even Slot wide receivers who line up a few steps off the line of scrimmage.

Before the snap, no player on offense can move at all unless brought in motion.

But even that player is only allowed to move side to side.

Moving up toward the line of scrimmage results in a false start or illegal motion penalty. 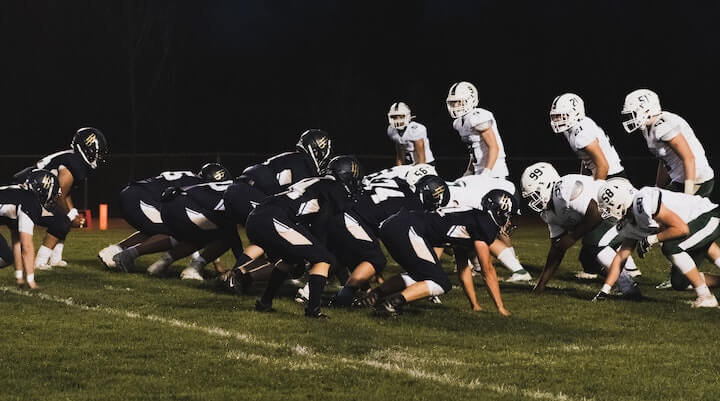 The Defense and the Line of Scrimmage

Unlike the offense, the defense has no requirements in terms of lining up at or off the line of scrimmage.

The defense can technically line up all their players at the line of scrimmage or none.

Typically speaking, defenses will have at least four players lined up right next to the line -- all four defensive linemen.

Cornerbacks, safeties and linebackers will sometimes align near the line of scrimmage, depending on the play.

Also unlike the offense, defensive players can move as much as they want before a play starts.

They can move back and forward, and side to side.

The only thing they can't do is move quickly toward an offensive lineman, baiting him to jump offsides.

Defensive players can even cross into the neutral zone and avoid penalties.

They can do so as long as:

An offensive lineman doesn’t move and the defensive player gets back out of the neutral zone and into the defensive side before the snap of the ball.

The defense receives an offsides penalty if any player lines up at or crosses the neutral zone at the snap of the ball.

There are plenty of physical lines painted on a football field, but the most important one -- the line of scrimmage -- is an imaginary line.

It stretches from sideline to sideline and does more than just signify the placement of the football before each play.

The line of scrimmage is the most important strategic field placement that all players need to learn when they get into game situations.

Everything starts at the line of scrimmage, and it dictates how both offenses and defenses will align prior to each play.