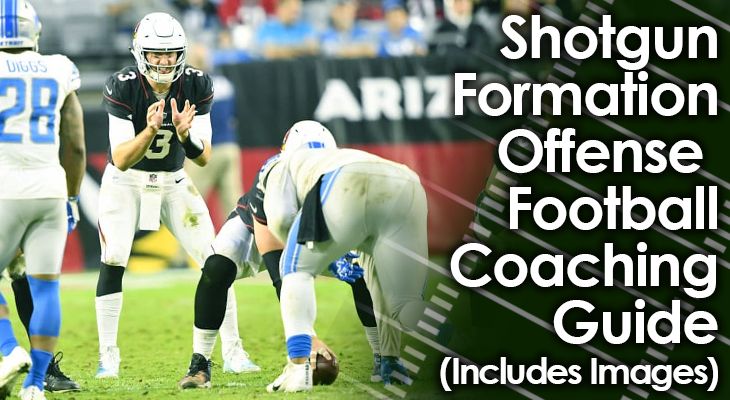 What once was a formation reserved only for pass-heavy teams or passing situations is now used prolifically throughout football.

We're talking about the Shotgun formation.

Here, the quarterback lines up about 5-7 yards behind the center instead of crouching down directly behind.

Football teams today are using this offensive formation not just for throwing downs. They're also running complicated plays out of it that lead to a lot of deception and big gains in both the passing and running games.

The Shotgun formation has its true advantages, but it's certainly not for every team at every level.

Let's take an in-depth look at the Shotgun Formation, including the personnel involved and some example plays.

Who Should Use the Shotgun Offense?

a. Teams with a strong-armed quarterback

While teams can certainly use the formation in the running game, the Shotgun is best used by teams that have a good passing quarterback.

In order to take advantage of everything the Shotgun has to offer, you're going to want to throw the ball at least a decent amount, and be able to stretch the field with downfield passes.

b. Teams with good receivers

If your team doesn't have great receivers, then it'll be hard to convince defenses that you're going to throw a lot.

And if you can't throw the ball with success, then the Shotgun isn't for you.

The Shotgun formation takes a lot of speed, quickness and agility from all players -- not just receivers and running backs.

Offensive linemen will need to block defenders in space + move around a lot.

They won't have a lot of help along the line from tight ends or other blockers, so they'll need to use more speed and quickness than brute strength. 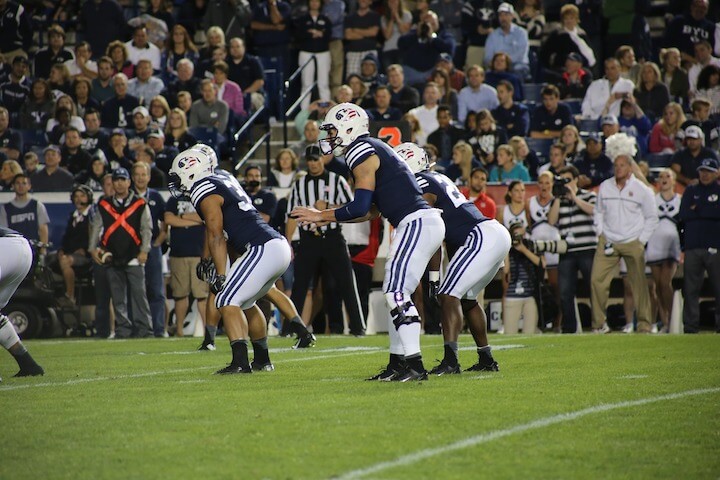 Who Should NOT Use the Shotgun Offense?

a. Teams that are slower

If your team is big and slow, the Shotgun formation might not be right for you.

Instead, you might opt for a power running formation, such as the Power I.

b. Teams that only run

The Shotgun formation certainly has a lot of great running plays (as we'll see below), but if you can't throw the ball at least a good amount, it isn't the best formation for you.

The Shotgun is most successful when you can implement a nice balance of runs and passes. 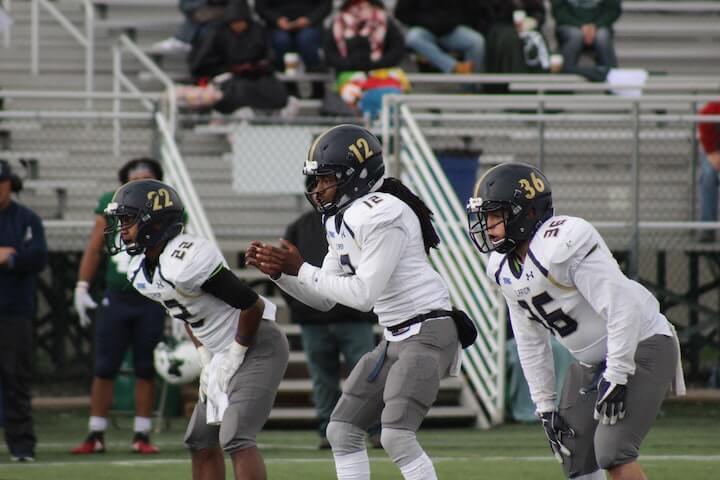 One of the great things about the Shotgun offense is that coaches can make significant adjustments and alterations to it.

Below is a general guide for the base personnel needed for the Shotgun Formation. Variations to it can be swapping tight ends, receivers, and running backs for one another.

Here is the more traditional personnel in a Shotgun offense:

Teams run the Shotgun formation for a number of different reasons...

It gives quarterbacks more time to read and react since they start on play 5-7 yards back behind center.

This extra space between defenders and the quarterback will give receivers more time to run their routes and get open.

It's also a formation that will hide the backfield behind the offensive linemen, which adds to the intrigue of the formation.

The standard formation for all Shotgun plays are:

The best way to understand how the Shotgun offense works is to take a look at two specific plays.

For this exercise, we'll look at one running play and one passing play.

These highlight just how effective the Shotgun offense can be at creating deception and keeping the defense guessing. 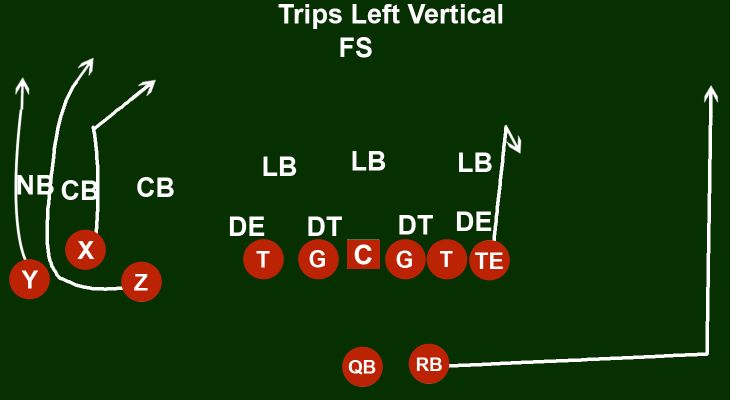 This play uses what's known as a "Trips" alignment.

In other words, all three wide receivers will line up in a bunch to the left side of the field.

This will force a bunch of defenders to line up in one area of the field, which could open up more space on the right side.

Almost all the receivers will be running deep routes, with the Tight End running a comeback route to serve as a safety valve for the Quarterback.

This play is designed to try to gain some big yardage.

Offensive Line: Every offensive lineman will pop up at the snap and go into their pass-blocking stance. They will take on whatever defender enters their space first.

Y Wide Receiver: The Y will line up on the far left of the Trips alignment and run a Go pattern toward the left sideline.

Z Wide Receiver: The Z will line up on the far right of the Trips alignment. They'll curl behind where the X lines up, and then run a Go route inside of the Y. They will then bend their route a little toward the middle of the field to create some separation from the Y receiver.

Tight End: The TE will initially act as if they were pass blocking. After a few seconds, they will release and run a Comeback route toward the right sideline.

Running Back: The RB will run a Go route toward the right sideline. It will look like a Wheel route, as they'll start by running down the sideline before turning the route upfield.

Quarterback: The Quarterback will take the snap from the Center and take a few step drop. They must then look first toward the left side of the field, seeing if he can hit one of the WRs deep. If they aren't open, the next choices are to the RB on the right followed by the TE as the safety valve. 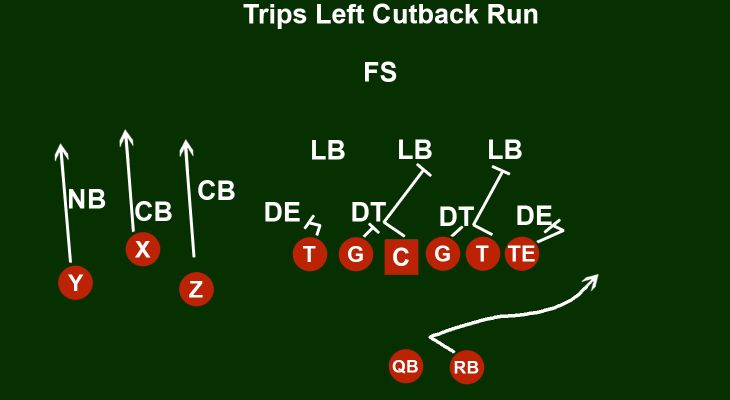 This is a running play out of the same Trips alignment to the left.

The idea here is that the three WRs will draw more defenders away from the middle and right side of the field. This hopefully leaves extra running space for the RB.

This play will use some deception as well, as the RB will run a cutback in the backfield. They'll first start left then cut hard to the right almost immediately after taking the handoff.

Offensive Line: The offensive linemen will all look to shield their blocking assignments from the right side of the field. The Center will help the left Guard block the defensive tackle before releasing to the middle linebacker (Mike). The right Offensive Tackle will do the same combo block with the right Guard, with one peeling off to the strong-side linebacker (Sam).

Tight End: The TE's job on this play is to shield the defensive end from the outside. That will be the primary route for the RB to take after getting the handoff, so it's important the TE seals off the outside.

Wide Receivers: The X, Y and Z receivers will all explode straight downfield after the snap. Their job is to make it look like they are running Go routes. This will hopefully draw all the cornerbacks deep away from the play to cover them. It should also draw the attention of the free safety, preventing them from helping in run coverage.

Quarterback: The Quarterback will take the snap and then immediately turn to their right and hand the ball off to the Running Back. The QB should follow through, faking that they still have the ball (hopefully this sets up a play-action pass later in the game).

Running Back: At the snap, the Running Back will take a hard step to the left and accept the handoff from the Quarterback. Then, they'll make a hard cut to the right and head toward the outside of the TE. That will be his primary running lane. If that's not open, though, they can cut back again and find the open hole.

The Shotgun formation is being used by more and more teams today than ever before.

Teams use this as much more of a balanced offensive approach than it originally was, when teams would use the Shotgun only in passing situations.

While this formation is best used by teams that have more experience, youth teams can use it to their advantage, too, by instituting more runs out of it.

Just keep in mind that your center will need to be strong enough to snap the ball back 5-7 yards.