What is an Ineligible Receiver? (Full Explanation) 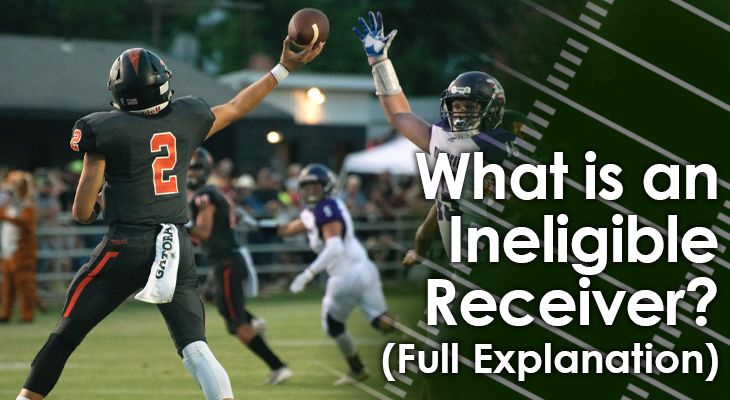 In a football game, not every player on offense is actually eligible to be thrown to as a receiver.

There are certain players on the field who may catch a pass, in other words, and others who aren't allowed to catch a pass.

Those players who ARE NOT allowed to catch a pass are ineligible receivers.

Those players may change from one play to the next, with certain limitations.

Who is eligible and who is ineligible will dictate to whom the quarterback can legally throw a pass.

In addition, teams may incur penalties based the actions they take regarding ineligible receivers.

Let's take a closer look at what an ineligible receiver is, and the potential penalties surrounding them.

One of the four (4) players lined up off the line of scrimmage will be the quarterback, while the other three are typically a combination of wide receivers, running backs and tight ends.

Of the offense's 11 players, six are eligible to catch a pass.

The five (5) other players on that play are considered ineligible receivers.

Who Are Eligible Receivers?

There are rules that dictate which players are and aren't eligible receivers.

You can't just pick and choose any combination you want to.

The NFL says that ineligible receivers are players who aren't lined up on either end of the line, or at least one yard behind the line of scrimmage when the ball is snapped.

Ineligible receivers are also any players who wear numbers 50 through 79 on their jersey.

This jersey number helps referees quickly identify which players are eligible and which are not.

There are certain situations where a player wearing 50-79 CAN be eligible, though...

As the offense breaks out of a huddle, a player wearing 50-79 can report directly to the referee as eligible. They must do this before they get in their position for the snap.

This last situation will occur if the offense brings another offensive tackle onto the field for short-yardage situations, for example.

They might line up an offensive tackle where the tight end normally would.

In this case, a player wearing 50-79 could line up where the tight end normally does, and report to the referee as an eligible receiver for that play.

He would then be legally able to run a route and catch a pass.

Ineligible Receivers Going Out of Bounds

Eligible receivers can become ineligible after a play already begins as well.

This happens if a player runs out of bounds prior to a thrown pass, or as a pass is being thrown.

If a player runs out of bounds on his own, he cannot be the first player to touch the ball after the throw -- even if he was an eligible receiver to start the play.

The exception to this rule is if a defender physically forces the eligible receiver out of bounds.

For instance, if a cornerback pushes a wide receiver out of bounds, the wide receiver can still come back inbounds and be the first player to catch a pass.

In this case, the receiver will be eligible so long as they make an immediate attempt to get back inbounds after being forced out. 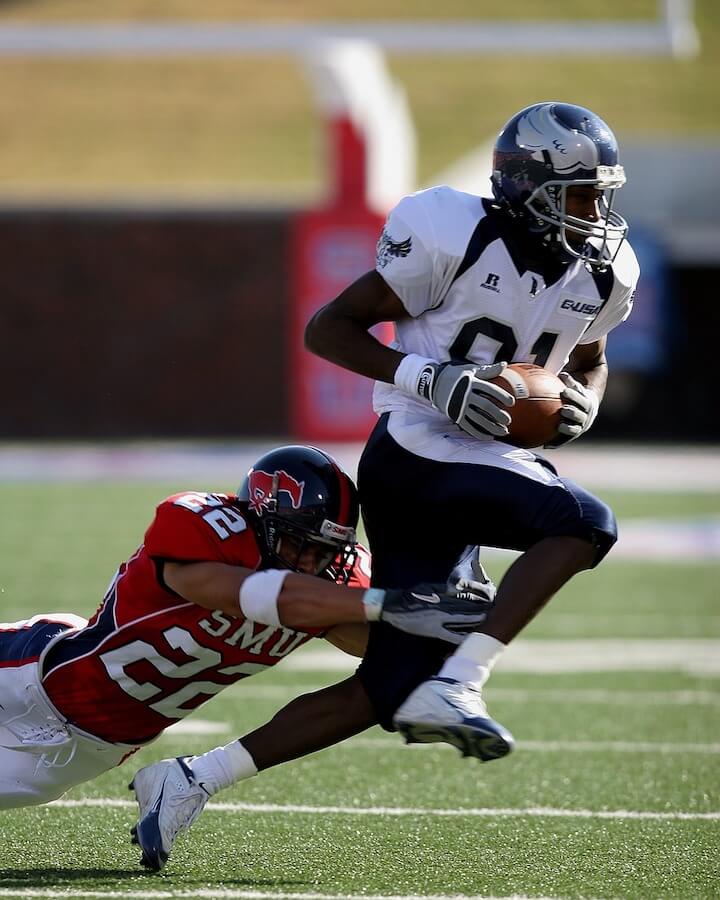 This rule is in place to prevent offensive linemen from going too far downfield to block before the actual throw.

You will see this penalty called most often on screen passes to running backs, when offensive linemen "release" from their pass-blocking stance to go downfield and try to block too soon.

The rule states that an ineligible receiver can't go outside of the neutral zone before a pass is thrown.

This means offensive linemen must stay within that neutral zone and can't "release" to block downfield on a passing play until the pass is actually released from the quarterback's hand.

When an ineligible receiver downfield penalty is called, it results in the offensive team losing five yards. Whatever play actually happened will be canceled out, and the offense will repeat the down.

Referees call an "Illegal Touch" penalty for any instance where an ineligible receiver is the first player to touch a forward pass.

This can happen in two ways:

First, if an eligible receiver goes out of bounds on his own (as described above) and is the first player to touch a pass

Second, if an offensive lineman catches a pass or is the first to touch a pass.

In both instances, the offense will receives a loss of five yards.

This, again, cancels out the play and the offense will repeat the down.

It may seem odd, but not every player is eligible to catch a pass on offense in a football game.

On any given play, there are certain rules laid out that determine who is and who isn't an eligible receiver.

Teach your players the rules and make sure to familiarize yourself with them, too, so that your offense isn't penalized for ineligible receivers downfield or illegal touching.