What is a Screen Pass in Football? (Full Explanation) 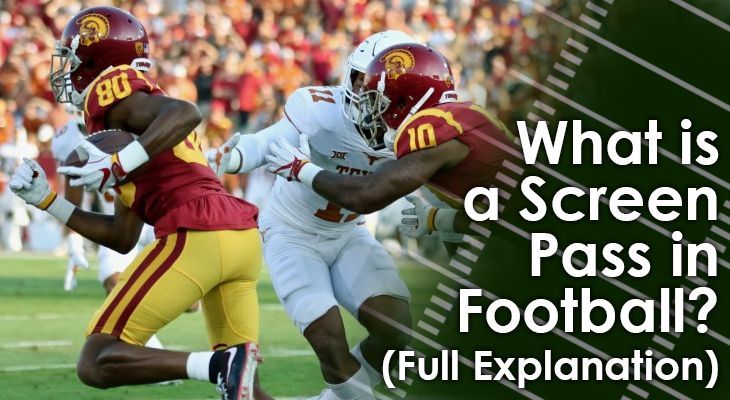 The screen pass is one of the most used deceptive passes, but can be one of the toughest to master on a consistent basis.

It's a type of pass that's meant to make the defense think the play will be a deep pass, only to end up being a short pass in the end.

It's much different than a play-action pass, which convinces the defense the play will at first be a run.

While the play-action looks for a deep pass, the screen pass is short and quick-hitting.

This allows the ball carrier to run in space behind a wall of blockers.

In theory, the screen pass is pretty easy to teach as it technically only involves a short, quick pass to a running back or wide receiver.

However, to perfect the entire play takes a lot of  timing from multiple players on the offense.

This makes it difficult to get everyone moving in sync so that the play works smoothly.

Let's take a look at how to run a basic screen pass and one variation of it. 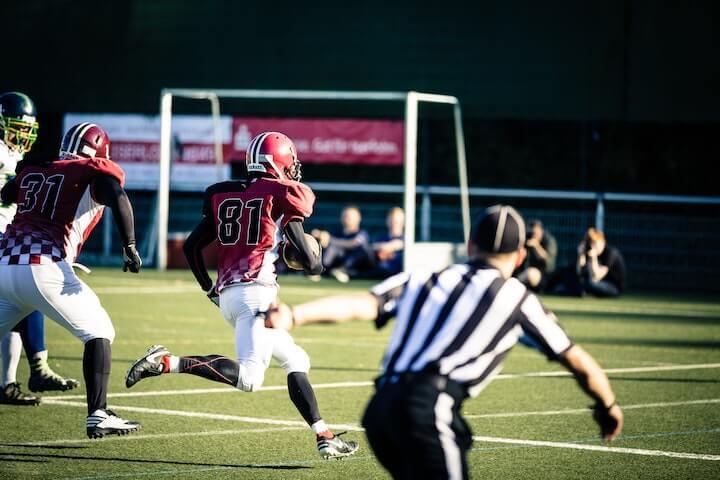 The Basic Running Back Screen Pass

The basic version of a screen pass involves a pass to a running back in the backfield.

To set up the play, the quarterback will take the snap from the center and take a few step drops.

The quarterback may then fake a handoff to the running back or scan downfield to fake a long pass.

At this point, the running back should be heading toward the outside.

At the last second, the quarterback will then shift focus and throw a short pass to the running back.

The running back will then run full speed ahead to try to gain as many yards as possible.

There are a few elements that are extremely important for offenses that want to run a screen pass.

First, the quarterback must truly 'sell' the fake play that is either going to be a run or a deep pass.

Scanning the field without giving away the actual play too early is essential.

The running back has to do some selling as well.

At the snap, the running back should sell the fake handoff or the long pass by acting as a blocker.

Releasing into the 'route' too early might lead to the defense reading the play.

The wide receivers and tight ends running routes must run them at full speed to sell the play as well.

They need to convince the linebackers and defensive backs that they're running legitimate deep routes.

If they don't, these defenders could peel off and approach the running back to stop the screen.

Finally, the offensive line -- which is actually the most important position for a screen pass.

Timing here is critical, especially since offensive linemen can't see what's going on behind them.

They must rely on a count to determine when they release.

At the snap, they'll start to block as if there's going to be a long pass play.

During this time, they'll need to count in their heads "one thousand one, one thousand two."

At the end of this count, they'll release out of their pass-blocking stances to block for the screen pass.

This means they'll slide over to where the screen pass is going and release out of their pass-blocking stance.

Then, they'll form a sort of wall in front of the running back and block any defender from getting in.

Here, the play-side guard and offensive tackle are responsible for the defenders approaching from that side.

The other guard and tackle will be picking up the back-side defenders trying to attack from the blind side.

Wide receivers can also be the target of screen passes, but they are slightly different.

On these plays, the quarterback won't try to convince the defense that they're throwing a long pass.

Instead, the quarterback will throw a screen pass to the wide receiver almost immediately.

This allows the receiver to try to gain yardage by making moves out in space.

At the snap of the ball, the receiver running the screen will take one step back into the backfield and run slightly toward the quarterback.

The quarterback's job is to get the receiver the ball at this point, so that he can catch it and immediately start running.

Unlike the running back screen, this isolates the receiver with only a few defensive backs on the outside.

This takes the defensive linemen, most of the linebackers and the back-side defensive backs almost completely out of the play right from the start.

It's a play that allows the receiver to make moves to get away from defenders.

This also means having maybe one or two other receivers (lined up at the same side of the field) as lead blockers.

The screen pass is a great way for the offense to use deception to gain a lot of yards in the passing game.

It's a quick-hitting play that usually starts by selling the defense on a long pass play.

The screen is simple in theory, but takes a lot of practice to master.

There is a lot of timing that's required by all players on the offense to make the screen pass work really well.