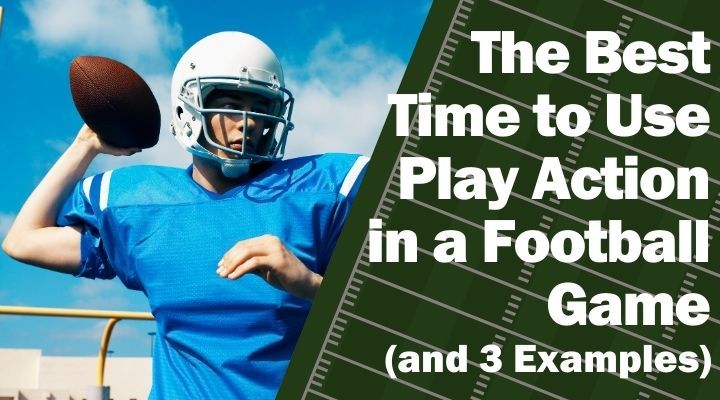 The play action pass is one of the most effective ways an offense can keep a defense off balance.

The goal of a play action pass is to make the defense think the play is going to be a run.

The play tries to take advantage of linebackers and defensive backs who may be peaking into the backfield and trying to gain an advantage by guessing what the offensive play call might be.

By faking a run play, the offense is hoping that at least one, if not more, "bites" on the run.

If the player takes a step or two toward the line of scrimmage anticipating a run play, it'll often take him out of position, allowing a receiver to get behind him to find open space on the field.

At its base, the play action pass is a relatively simple play.

All offensive players will begin acting as if the play will be a run.

Offensive linemen will block straight ahead for a step or two. Wide receivers and tight ends will act as if they're blocking, too.

The quarterback will head toward the running back as if he were going to hand the ball off, and a running back will act as if he's going to take the handoff.

Then, it’ll switch over to a passing play.

The offensive linemen will release and step back to protect against the pass rush.

Wide receivers and tight ends will release their blocking motion and run their passing routes.

The quarterback will fake the handoff and pull it back while the running back runs ahead as if he has the ball.

Then, the offense will execute the passing play, hoping that receivers are open downfield as the result of defenders biting on the play action and trying to react to what they thought was going to be a run.

The play action pass is the most common "misdirection passing play".

While it can be run on any down and any spot on the field, there are certain game situations when it's often more effective than others. When to Run the Play Action Pass

In general, the play action pass is most effective when there’s a significant threat of a running play.

The times when play action is most effective are based on the following four situations:

1. When the Offense Has Established the Run

If the offense has been able to establish a good running game throughout the early parts of the game, then the defense will be more susceptible to play action passes.

That's because the defense will anticipate the offensive coaches calling run plays more often since they've resulted in successful gains.

This is one of the best times to take advantage of the situation and use a play action pass.

2. When the Offense Has a Good Running Game

Remember, the play action pass is most effective in situations where the "threat" of a running play is significant.

In other words, an offense that’s known to have a great running game is enough to threaten the defense -- even if they haven't established a solid running game in a game just yet.

Defenses do work throughout the week before games researching their opponent.

If they know that an offense they're about to face has a good running game or a good running back, they're going to prepare for a lot of running plays.

This can work to the offense's benefit.

Coaches can call play action passes early in games just because they're known as a good running team.

Offenses that fall into this category can often even run a play action pass on the very first play of the game.

3. When the Down and Distance Is Typical for a Run

Another great time to run a play action pass is during a situation where the defense might rightfully expect the offense to run the ball.

This will be based on a specific down-and-distance situation where the offense would typically call a running play.

Situations where the offense only has to gain a few yards for a first down -- or when they’re close to the end zone -- are great examples of this.

On second-and-two, for instance, many offenses will simply look to run the football to gain those two yards to get beyond the first-down marker to gain a new set of downs.

Similarly, when the offense is close to the end zone, they’ll often like to hand the ball off to a running back for a high-percentage play that could get them across the goal line for a touchdown.

The defense will often prep for this, stacking more people along the line of scrimmage during these situations.

Linebackers and safeties especially might try to cheat up closer to the line of scrimmage in anticipation of a running play.

And this is all exactly what a well-timed play action pass will take advantage of.

By faking the run and going to pass, the offense can exploit the defenders guessing run, hopefully sneaking a receiver behind the defense for a big play.

4. When the Offense Has a Lead

The last situation where a play action pass is extremely effective is when the offense has a lead -- especially if that lead is big or if it's late in the game.

In both of these game situations, offensive coaches will often call running plays more than passing plays so that they can just grind out the clock and secure the win.

Running plays where the runner remains in bounds keep the clock ticking and closer to the game ending.

They work hard on preserving that lead and protecting the football.

Because of that tendency, the play action pass can work exceptionally well in these situations.

The offense has a great opportunity to take advantage of the defense guessing run and doing everything they can to load up the box to stop the run.

Play action passes can be especially effective for teams with smaller leads late in games.

Popping a big play with a play action pass in these situations can really turn a game and cement a win.

Let's take a look at three examples of play action passes out of a few different formations to see how they’re run.

Again, these play action passes can be run at any point during the game, but it's best to try to use them in one of the four situations mentioned above.

On all of these football plays, the players' initial reaction after the snap will be that it's a run play.

Then, they'll all shift their responsibility to the actual passing play -- whether that's taking a fake hand-off, running a route, or pass blocking. This play is run out of a Pro Formation that uses a shotgun, with a running back  behind the quarterback and a fullback flanked out a little wide to the left.

The fake handoff will go to the running back.

The quarterback will roll slightly to his right after the fake handoff.

The X and Z wide receivers will run deep pass patterns, while the fullback will run a flat route to the left and serve as the quarterback's safety valve in case one of the receivers aren’t open downfield.

Both receivers will run a slant and go route (also known as a Slugo).

The Z will run the Go portion of his route more on a diagonal to the right side of the field, serving as the quarterback's primary target. This play is run out of the Spread formation, with the quarterback out of a shotgun and only one running back on the field.

There are three wide receivers on this play as well as one tight end lined up at the line of scrimmage.

The play will employ a power blocking formation, too, since the tight end won't go out on a passing route.

The quarterback will take the snap and fake the handoff to the left, then curl back to his right before setting to throw.

To throw the defenders off a bit, these two players will cross each other at the line of scrimmage.

On the right side of the field, the Z wide receiver will run a deep post pattern.

Around 12-14 yards into this pattern, he'll fake a corner route before turning it into a deep post. This play action pass is run out of a power formation.

The quarterback will line up under center, with a running back about seven yards behind him in the backfield.

A wingback will line up on a diagonal toward the tight end's outside shoulder on the right side of the field.

The second wingback -- who typically lines up on the left side of the field -- will become a fullback and line up on a straight line between the right wing back and the running back.

At the snap, the quarterback will fake the handoff to the running back and quickly roll to his right.

His primary passing target on this play will be the tight end who’ll be running a corner route.

The fullback will also run a flat route to the right in case the tight end isn't open.

This play is designed to be a quick-hitting play.

The idea is to get the ball into the tight end's hands as quickly as possible so that the faster defenders can't catch up and cover him before he gets the ball.

The play action pass is one of the most effective misdirection plays for an offense.

At the same time, it's one of the most basic and simplest plays for an offense to install.

Play action passes can be run out of literally every offensive formation there is.

There are certain game situations in which the play action pass is more effective than others, though.

So, offensive coaches should learn when these times in the game are so that they can call an effective game plan to take advantage of what the defense is trying to do.