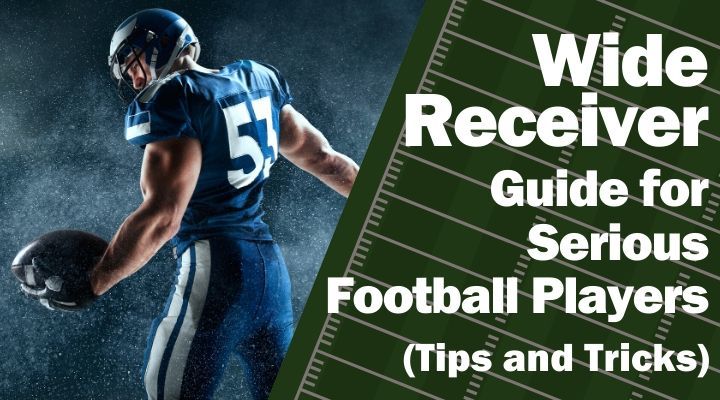 Wide receiver is the position of some of the greatest players to ever play the game of football.

They’re also some of the highest-profile players, either for their pure remarkable skills, their personality, or (in most cases) both.

Some of the biggest names the sport has known have played wide receiver.

Most people think that all it takes to be a great wide receiver is speed and good hands. Those two traits will only make you a good wide receiver, though.

To be a truly great wide receiver, a player must also be tough, learn the difficult task of running crisp routes, and be willing to help out in the running game.

All of the truly great wide receivers possess the last three traits on that list, even though they’re not the ones that make them stand out on the field.

Still, without having that well-rounded repertoire of talent and skill, a player would never make it on the list of the greatest ever at the position.

Because of this, wide receiver is a much more difficult position to master than many people think.

Here are some of the traits, roles and responsibilities, and tips for players who want to be a great wide receiver. 6 Traits of a Great Wide Receiver

The word "athleticism" is often used to describe wide receivers.

But what exactly does it mean?

For our purposes here, we're talking about a combination of being quick, agile, and having great balance.

Wide receivers don't necessarily have to be straight speed demons -- although it certainly doesn't hurt if they're blazing fast.

However, they do need to be quick.

Quickness is what a wide receiver will use more often than speed. It's the trait he'll use to run most of the routes he's asked to run.

Without good balance, a wide receiver would never be able to make those cuts, to adjust his body, and to get in a great position to catch the ball -- all as he's likely fighting off at least some contact from a defender.

A player could have all the traits and skills to be a wide receiver, but if he isn't a good pass catcher, then wide receiver isn't the position for him.

At the end of the day, the way a wide receiver will make his biggest impact on the field is by catching passes.

And he must be able to do all of these things consistently.

On passing routes, wide receivers need to explode with their lower body off the line of scrimmage to create separation from a defender, which ultimately leads to them being open.

Once they do get open and catch a pass, every defender on the field will be attacking him to try to make a tackle.

Wide receivers now must fight off tackle attempts using stiff arms and other brute strength to avoid being taken to the ground.

On running plays, wide receivers will be asked to block.

While it'll be a different kind of blocking than an offensive lineman does -- focused more on taking the right angles than using brute strength to move a huge defensive lineman out of the way -- doing so successfully still takes an impressive amount of upper and lower body strength.

On just about every play, wide receivers will be asked to run at full speed.

On passing plays, wide receivers must run as fast as they can during their designated route to try to make it downfield and get open.

In a typical game, there may be 30-40 pass attempts, but even the greatest receivers may only get thrown the ball on one-third of those plays.

Despite this, great wide receivers will be running hard and fast as if they’re going to be thrown the ball on every play.

Even on running plays, wide receivers must run at top speed to get in the proper position to make a block.

Unlike offensive linemen, wide receivers will need to chase down their blocking assignments on most plays, since the defenders aren't lined up directly opposite them and attacking straight ahead.

Without a lot of stamina, a wide receiver will never be able to make it a full game.

To be a great wide receiver, you must not only study the playbook to learn your routes and blocking responsibilities, but you must study the game and learn defenses.

Great wide receivers don't just run the route they're assigned and then just stop if the play isn't there.

Great wide receivers can recognize a spot on the field where they might be able to get open based on how the defense is reacting to his route.

To be a truly great wide receiver, you must make split-second decisions and adjustments to your route.

If an opening isn't there with your assigned route, you must know how and when you can break it off or adjust to get yourself open.

6. Wide Receivers Have Great Relationships with Their Quarterbacks

This isn't so much an innate trait as it is a necessity of playing the position.

A wide receiver's on-the-fly adjustments will only be successful if his quarterback can anticipate and recognize where he’s going.

Great wide receiver-quarterback combinations often know exactly how the other position is going to react in a certain situation, without the need to talk to each other.

The only way to establish this relationship is to spend a lot of time in the film room and the practice field working one-on-one with your quarterback.

It's time that will be well spent. A wide receiver has a wide range of roles and responsibilities. Here are a few of them:

1. He Must Run Great Routes

The primary role of a wide receiver is to get open on passing plays.

The only way he can make a big impact in the passing game is if he gets open for the quarterback to throw him the ball.

And the only way to get open is to run crisp, effective routes.

All wide receivers must learn the nine basic routes in what's known as the Route Tree.

These are the most common routes that every wide receiver will run -- no matter what team he's playing for and what type of offense they’ll run.

He may be better at running some routes than others, and that's OK.

The important thing is that he learns how the routes are run, and practices them over and over again so that he can run them effectively.

2. He Must Catch the Ball

Running a great route and getting open is only the first step in the process.

The next step is catching the football.

Again, if a wide receiver can't catch well and consistently, then this isn't the position for him.

Not every ball is going to be thrown perfectly to them while they're running their route in stride.

Sometimes, they'll need to reach up, down, left, or right to make the catch. Sometimes, the ball will be thrown hard right at their chest.

Different throws will require the wide receiver to corral the ball in different ways.

At the end of the day, though, all that matters is that he makes the catch successfully.

3. He Must Run After the Catch

Running a crisp route is step one. Catching the ball is step two. And gaining yardage after the catch is step three.

A wide receiver will certainly be limited in his ability to be great if all he does is catch the ball and then get tackled immediately.

Sure, he can be a reliable target for a quarterback, but truly great wide receivers make huge impacts after they catch the ball.

To do this, they must have great explosion and speed after they make a catch.

They also must be elusive, juking, spinning, and faking defenders out so they can get to open spaces on the field.

And they also must be able to break tackles, shed contact, and remain on their feet.

4. He Must Be Willing to Block

Some wide receivers are only engaged when it's possible that a ball could be thrown their way.

On running plays, they often take a play off and don't give their best effort.

To be great at the position, you must work hard on every play, even if there's no chance that you'll be thrown the ball.

To be great at the position, a wide receiver must show the same dedication and effort on running plays as he does on passing plays.

He must learn how to block for his position, which means taking the right angles to shield off defenders from the ball carrier. 4 Tips for a Wide Receiver

Here are some tips for players who want to be a good wide receiver:

1. Work on Your Strength

If you really want to be a great wide receiver, you're going to need to hit the weight room hard.

It's imperative that you build a strong lower and upper body.

Building this strength will also help you become faster.

2. Work on Getting Soft Hands

You have to have strong hands to play wide receiver, but in order to make a lot of different catches, you need to have soft hands, too.

The ball is going to be thrown your way at a high rate of speed.

The only way to catch it successfully is if you're able to absorb the throw and not stop it in its tracks.

Having soft hands will allow you to corral a hard-thrown football.

Much like catching a ball in baseball or receiving a pass in basketball, hockey, or soccer, you need to cradle a football when it's thrown to you.

If you have "hard" hands and not "soft" ones, the effect will be like throwing a football against a hard wall:

It'll bounce right off them.

Great wide receivers know where to be at all times.

They study their playbook, of course, to know their routes and all their responsibilities on a given play.

But great wide receivers also study the game to learn what defenders do on most plays.

They learn what’s most likely to happen when a defender reacts in a certain way and how he can use that to his advantage to get open.

The only way to do this is to watch a lot of games, study a lot of film, and ask questions when you have them.

4. Work with Your Quarterback - A Lot

Great wide receivers have great relationships with their quarterbacks.

The two will often know exactly what the other is going to do in certain situations without having to communicate using words or hand signals.

If you want to be a great wide receiver, you need to establish this solid relationship with your quarterback.

Talk to him on a consistent basis in practice, in the film room, and in the locker room so you can get on the same page.

They’re dedicated students of the game, and they’re committed to giving 100% on every play -- no matter whether they’re the primary passing target, a decoy, or have blocking responsibilities on a running play.