All 9 Football Routes Explained with Images (The Route Tree) 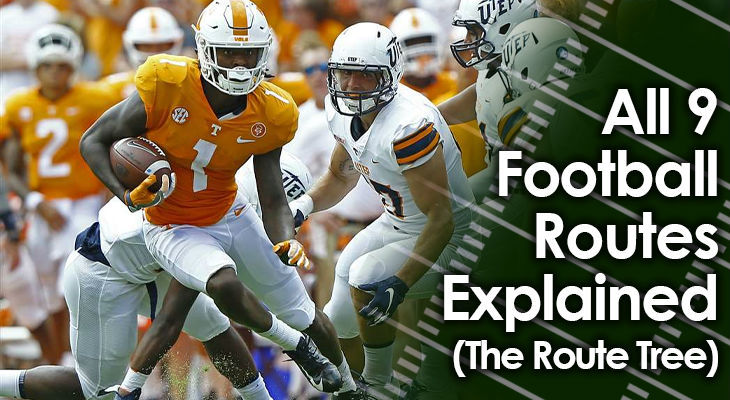 Understanding the many different football routes is important for every player and coach.

On any given play, each receiver on the field will be asked to run a specific route to attack the different levels of the defense, and to keep the defenders off balance.

But let’s first start with the basics…

What is the “Route Tree”?

Every pass catcher (no matter what position he plays or where he lines up on the field) will be asked to run a variation of one of nine basic football routes.

These 9 routes make up the “Route Tree”.

And the reason why it’s called a route tree (as you’ll see in the images below) is that when they’re all drawn together on a play sheet, the routes form what looks like a tree. Having a good understanding of each of the nine football routes, how they’re run, and the situations in which they’re most often used is very important.

Below, I’ve listed each of them in order of shortest to longest depth from the line of scrimmage. ​The flat route is a basic route that quickly breaks to the outside of the field, toward the sideline.

The receiver will take a few steps forward, then immediately cut to his left or right towards the closest sideline.

The flat route is usually run by either wide receivers lined up in the slot, tight ends, or running backs.

They aren’t typically run by outside wide receivers simply because of the limited amount of space between the sideline and where they line up on the field. A slant is similar to a flat route in that it’s a quick-hitting football route.

The receiver will take a few steps forward, then use an inside break to slant diagonally across the field.

Slant routes can be run by any position, from any alignment, and at any depth.

Slants can be run on short, medium or deep depths on the field.

They are quick-hitting routes, though, so the quarterback will usually get the ball out of his hand quickly if he throws to someone running a slant. ​The comeback route is designed to run just like its name describes.

The receiver will sprint straight downfield, then quickly stop in his tracks and slant back toward the line of scrimmage and the sideline.

This football route is typically only run by an outside wide receiver, because it utilizes the sideline and the receiver’s ability to shield the defender from the ball by using both his body and the sideline.

It’s most often used in combination with a quarterback’s back-shoulder throw that is so popular in today’s game of professional football, with quarterbacks throwing to a part of the receiver’s body that only the receiver can get to. ​The curl can also be called the stop route.

It’s the exact opposite of the comeback in that the movement back toward the line of scrimmage after the stop is toward the middle of the field instead of toward the sideline.

Because of this, it’s a route that is most often run from players lined up toward the inside of the field. In fact, the curl route is often used inside in combination with the comeback route being run outside.

In this football route, the receiver will sprint directly downfield, then stop and curl back to the inside of the field, away from the closest sideline. ​The out route is similar in look to the flat route, but it is done at a much deeper depth.

Completing this route successfully will require not only good execution from the receiver, but a strong arm from the quarterback, as the ball will be in the air for quite some time before it reaches the receiver.

For all intents and purposes, an out route is a flat that is run at a depth of about 10 to 15 yards downfield instead of only few yards off the line of scrimmage.

Again, this football route is often run by receivers who aren’t lined up on the far outside of the field, because it requires taking advantage of the sideline.

Oftentimes, receivers who run this route will catch the ball very close to the sideline after running 10 to 15 yards vertically, then another five to 10 yards horizontally. ​This route goes by two names, either the “In” or the “Dig”.

In effect, it’s the exact opposite of the Out route.

The receiver will sprint 10 to 15 yards straight downfield, then stop and cut directly across the field in a straight horizontal direction toward the inside of the field.

The In or Dig requires a receiver who is very precise in route running.

That’s because he must decoy the defender into thinking he’s running a straight deep route and then quickly and precisely cut across the middle, creating separation from the defender without the benefit of the sideline’s help.

In fact, the In or Dig route will put the receiver in harm’s way of extra defenders as he runs across the middle of the field. ​The last three routes on the Route Tree are the deeper-depth routes.

Like its name suggests, the corner route attacks the deep outside corner of the field.

The receiver will run at a depth of 10 to 15 yards straight ahead, then run in a diagonal direction toward the deep outside part of the field.

This corner route is similar to the slant route in that it finishes with in a diagonal direction.

However, the idea isn’t to make a sharp cut that limits the depth of the route, but rather to slant to the outside at an angle that also allows the receiver to get some depth.

This football route is created to attack the safeties, especially in a zone defense where the safeties provide extra protection over the top. It’s run in the exact same fashion, except that the diagonal direction is toward the inside of the field instead of the outside.

This is a route that will attack the safeties again in the same fashion that the corner route does.

In this football route, though, the quarterback will often throw a deep ball to an open area of the field and allow the receiver to use his speed and separation to go run under it.

The idea here is to not only create space between the receiver and defender, and not only to open up space over the middle of the field, but to also attack a separate open space deep down the middle. The last football route on the tree is the simplest.

Quite simply, the fly route asks the receiver to go deep.

That’s why it is often referred to as the “Go” route.

The receiver is asked to run as fast as he can as deep as he can straight down the field from where he lined up.

The idea is to get separation from the defender who might be anticipating that the receiver will break off the vertical direction of the route and end up running any of the other routes on the Route Tree.

The speed of the receiver should force the defender to break out of his backpedal motion and turn his back to the line of scrimmage to run with the receiver.

This should allow the receiver to have the advantage of knowing when the ball is thrown and where it is traveling, while the defender won’t have that same information.

The quarterback will need to have a strong arm to complete a pass to a receiver running a fly route, as the ball will often travel at least 30 yards in the air before it reaches the receiver’s hands.

​While there are only nine true routes on the Route Tree, there are three more that are run quite often that are designed to be combinations of nine basic routes. a. The “Sluggo” Route

The sluggo is a combination of the slant and go routes, which is how it gets its name.

The route will start as a slant route, with the receiver taking a few steps forward and then slanting toward the middle of the field…

But then end as a go route, with the receiver halting the slant route and turning it into a go route to the deep portion of the field.

b. The “Bubble” Route

This is a screen route that can be run by any player lined up as a wide receiver.

Instead of moving forward at the snap of the ball, the receiver will take a step back and move slightly toward the quarterback as the ball is thrown to him on a screen play.

The idea is to get the receiver the ball quickly and let him use his speed and skill to break tackles and gain yardage.

This is similar to a slant route, but instead of the receiver making a sharp cut to the middle, he rounds out the cut and “drags” the route further across the field toward the opposite sideline.

This is a longer-developing route than the slant route is, and the receiver will typically run almost the width of the field from start to finish.

​The Sluggo route is the most common type of double moves that receivers use to try to confuse the defender.

Others are the hitch route, where the defender might start by running a slant, but then stop in his tracks and occupy a certain spot on the field.

The idea behind the Route Tree is not just to create a pretty picture with all the different types of football routes that receivers can run...

Instead, it hammers home the concept that route running, much like a tree, is most successful when it has all the parts – a trunk and branches and different heights or depths.

The best offensive passing plays are those that use multiple football routes in the tree in the same play to cause confusion among defensive players.

And also open as much space as possible for receivers to roam.

You gave a good explanation of the routes,combined routes,and double moves.

[…] All wide receivers must learn the nine basic routes in what's known as the Route Tree. […]

[…] idea here is that by running routes at all different levels of the defense, safeties won’t be able to help out in shorter passing […]