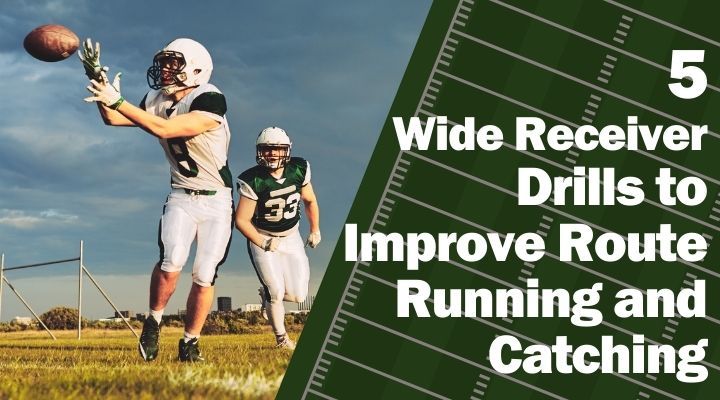 Being a great wide receiver takes speed and a solid pair of hands.

But it also takes extensive knowledge of the offensive playbook, pinpoint route running, and the awareness and ability to make adjustments on routes to find open spaces in the defense.

Some of the skills that are necessary for a player to be a great wide receiver are unteachable.

You can certainly help a player work on improving their catching ability, but if they don't have great hand-eye coordination to begin with, it'll be awfully hard to develop, even with a lot of work.

At the same time, it's difficult to teach speed.

Again, a coach can certainly help players get faster by learning techniques to get more leverage and explosion in their running out of their initial stance.

But, either a player is born with speed, or they aren't.

These can be termed innate skills in a way -- traits that players are born with and that can't be taught.

But for as many innate skills as great wide receivers have, there are an equal number of skills that can be developed over time by working hard at drills in practice with a coach and some teammates.

Here are 5 wide receiver drills that can help wide receivers develop the skills necessary to improve their route running and catching. This drill will help wide receivers work on their hands.

It’ll force them to do two very important things:

(1) It won't give them a lot of time to see the ball into their hands, forcing them to react quickly.

(2) It'll force them to focus on catching the ball with their hands rather than letting the ball get into their chest.

You'll need two people to do this drill -- the receiver and another player or coach who will throw him the ball.

The two people should line up about five yards opposite each other. The person throwing the football should either be seated or kneeling.

The receiver will start the drill on his back, with his knees bent and his feet planted on the ground.

The coach will blow a whistle to start the drill. When this happens, the receiver will do a sit-up.

The other person in the drill will then throw the ball to the receiver, trying to time it so that the ball arrives at the receiver not long after he completes his sit-up.

The receiver should focus on catching the ball with his hands stretched out beyond his body.

It'll be important for him to get his arms extended as he completes his sit-up, just as he should when a ball is arriving to him as he's running a route.

You can make this drill a little more complicated by having the coach throw the ball in different directions to the receiver.

Start by trying to throw the ball right at his chest.

Then, as the receiver gets this down, start throwing the ball to his left, to his right and above his head.

By changing the direction of the throw, it'll force the receiver to react quickly and make adjustments with his eyes and his hands to make the catch.

Another one of the best wide receiver drills to work on ball-catching skills is called wall ball.

The nice part about this drill is that players can do this on their own. Increasing the challenge of this drill will only take one additional player/coach.

Let's start with the individual version of the drill.

The player should start by facing a wall with a football in his hand. He should stand about five feet or so away from the wall.

He’ll then throw the ball off the wall and work on catching it with his hands after it bounces off the wall.

He should throw the ball at different speeds and in different directions so that he has to adjust his reaction time and his arms, hands, and feet to make the catch successfully.

This individual version of the drill is something that wide receivers can consistently work on throughout their careers.

It's a great way to constantly improve their hand-eye coordination and to stay sharp.

To make this drill more challenging, you can include another player/coach. This person will stand a few feet to the wide receiver's left or right.

Without giving the receiver notice, the player/coach will be the one to throw the ball off the wall.

The receiver will then need to catch the ball successfully with his hands.

Once he does, he should return the ball to the player/coach, who’ll repeat the process.

Again, the player/coach should adjust the speed with which they throw the ball against the wall and also alter the angle.

This will force the receiver to speed up his reaction time and adjust his body to make the catch successfully. This drill will help wide receivers work on their footwork, which is an essential component of running crisp routes.

This drill will help receivers work on cutting and exploding out of their cuts in quick succession.

You'll need six cones for this drill. Set up the first cone on a yard line.

On the yard line five yards downfield, set up a second cone at a 45-degree angle to the first cone.

Then set up two more cones on that yard line, about five yards apart from each other.

The final three cones will be set up on the same yard line as the initial cone.

The second on this yard line will be 10 yards away, and the other two cones will be spread out five yards apart from each other.

The wide receiver will need to make a move at the first cone to simulate trying to juke a defender lining up opposite him.

He'll run on a slant to the second cone and cut to the right beyond the third cone.

He'll then turn and cut to his right at a 90-degree angle and curl back to the fourth cone.

He'll then turn to his right and sprint to the right, stopping as he reaches it and taking a 90-degree turn to simulate an in route.

He'll run to the fifth cone before stopping and curling around the sixth cone to finish the drill.

This is a great drill for working on a wide receiver's footwork, which is so important to running crisp routes.

You can move these cones around in any number of ways to simulate different routes.

You can also finish the drill by having a coach throw the wide receiver a pass as he gets around that final cone. This drill will help wide receivers run crisp routes with an obstacle in the way, before turning and catching a pass from the quarterback.

To run this drill, you'll need a stand-up dummy, a center, and a quarterback in addition to the wide receiver.

The quarterback will line up either under center or in shotgun (depending on the offense your team runs).

The wide receiver will line up slightly off the line of scrimmage and toward the outside hash mark.

You'll want to set up the dummy bag about 5-10 yards downfield.

The drill will start when the quarterback calls for the snap.

When he does, the wide receiver will sprint to the dummy bag, and curl around it, looking back to the quarterback for the pass.

The quarterback will deliver a pass so it arrives just at the time the receiver gets around the bag.

The wide receiver needs to get around the bag, make the catch successfully, and then turn upfield.

The great part about this drill is that you can run it with all of your wide receivers in quick succession.

You can also change the routes the players will run around the dummy bag.

It can be anything from a curl to a post to an in route.

If you want to make the drill a little more difficult, you can replace the dummy bag with a coach holding a bag.

The wide receiver will run toward the coach as he did with the dummy bag.

The difference this time is the coach will extend the bag in his hand to make contact with the wide receiver.

This will make the receiver's job a little more difficult and simulate the contact he might have in an actual game.

Another skill wide receivers will need to perfect is tracking the football.

On each play, receivers will have specific routes to run.

While quarterbacks will try to hit the receivers in stride at the end of the route, sometimes, adjustments need to be made to account for where the open spots on the field are.

When this happens, wide receivers will need to track the ball in the air down into their hands.

This is extremely important, too, on longer passes.

The ball will hang in the air longer on these deep balls, so it'll be important for receivers to know how to track a ball in the air and make a successful catch while sprinting downfield.

All you'll need for this drill is a quarterback and the wide receiver.

The quarterback will signal the start of the drill to simulate a snap.

At the start, the wide receiver will sprint downfield in a straight line.

The quarterback will throw him a deep ball and aim to land the ball on the wide receiver's outside shoulder.

The wide receiver's job is to track the flight of the ball in the air, make adjustments with his body if necessary, and make the successful catch.

This is a great drill to run with the quarterback, as it'll give the pair a chance to work together to know how the wide receiver runs and how the quarterback throws.

You can make this drill a little more difficult by having the wide receiver run different routes.

For example, you can run deep post or deep corner routes, which will force the wide receiver to make cuts while also tracking the ball.

A final variation of this drill would be including a defensive back. This would make this drill as close to a game situation as possible.

The wide receiver would have to run his route to gain separation from the defender, track the ball in the air, and then make the successful catch, all with the defender trying to stop it from happening. These are great wide receiver drills that you should run with all of your wide receivers to help teach them some of the basics of playing the position.

While the saying is that you can't teach speed and you can't teach good hands, you certainly can work on plenty of skills that wide receivers need to do well at their position.

Start with the most basic versions of these wide receiver drills, and then add on variations as your players get more comfortable running them.

If you're looking to learn more about the position, make sure you check out my complete guide to the wide receiver position.

thanks this helps alot