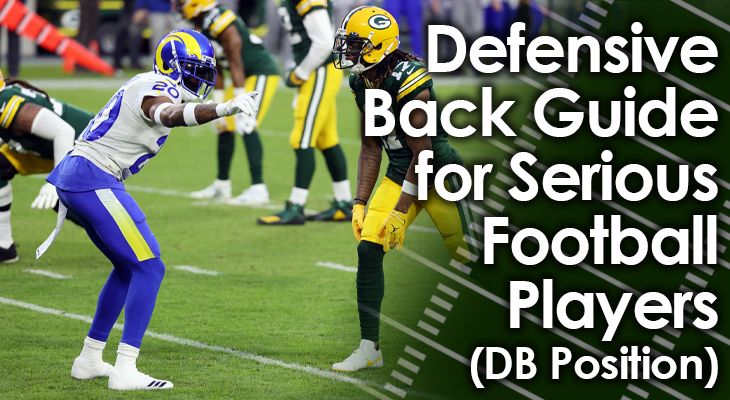 Defensive backs (DB) are one of the most skilled positions on the football field.

Oftentimes people assume DBs are only good at covering the pass or that they would be wide receivers if only they had good hands.

Both of those assumptions are wrong, of course.

Being a defensive back -- whether a safety or cornerback -- means taking on one of the most challenging jobs on the field.

Players who occupy these positions must not only cover big, fast wide receivers but also speedy and strong running backs and bulking tight ends that can run.

They also must chip in heavily against the run.

They do this by either making clean solo tackles or angling ball carriers out of bounds or back in toward another defender.

At times, defensive backs might even have to blitz the quarterback.

One of the most difficult parts of a defensive back's job is that if they mess up on a play, it often results in a huge gain that can easily turn into a touchdown for the opposing offense.

They don't have seven other defenders behind them to help out, as defensive linemen do, for example.

But, what makes for a great defensive back? 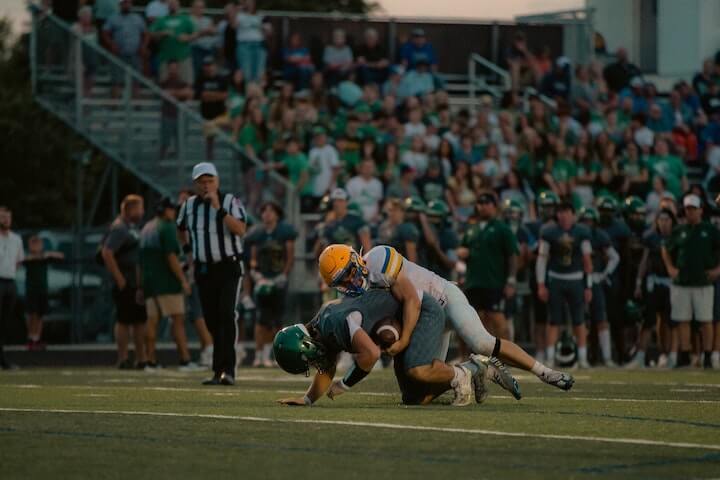 Defensive backs must be light on their feet and agile enough to change direction both quickly and often.

No matter whether you play cornerback or safety, you'll be roaming all over the field trying to keep up with receivers.

Speed and quickness is an important aspect of being able to do this effectively (as we'll soon discuss), but having the ability to quickly change direction might be the most important trait a DB needs to have.

Because they need to change direction so often, it's very important for defensive backs to be explosive.

This means that they must be able to exert a great amount of energy from a basic standing position to get up to top speed quickly.

For example, if they are back pedaling and the receiver they're covering cuts to the middle of the field, the DB must be able to stop, pivot, and explode forward to keep up with the receiver.

This requires a great amount of power and explosiveness, as the receiver will be running in stride the entire time.

Many DBs get a bad rap as being poor tacklers.

While they aren't on par with middle linebackers in this regard, great defensive backs should be solid tacklers in their own right.

Typically speaking, safeties are the best tacklers among all defensive backs, but every player considered a DB must be able to tackle.

As mentioned before, most of the tackles that defensive backs must make are of the solo variety.

Because they play to the outside of and deep in the field most of the time, they don't have a lot of help from their teammates to make tackles.

This makes it very important for them to wrap receivers up and make sure tackles.

And if they can't bring a ball carrier down to the ground themselves, they must be able to angle ball carriers either out of bounds or back to the middle of the field where more teammates are, ready to help.

Contrary to what most people believe, great DBs actually have excellent ball skills.

They may not have the same soft hands as the best wide receivers do, but the best defensive backs have similar if not better ball skills.

This means that they have the ability to get to passes thrown in their direction and knock them down or disrupt the pass any way they can.

This requires the ability to get their hands in front of a receiver's face and tipping or knocking balls away.

While it's not a requirement that defensive backs record a lot of interceptions, players who are able to do so can vault themselves into the discussion of being the greatest at their position.

Similarly, defensive backs must know all the passing routes and be able to recognize which one an offensive player runs.

To do this, they must spend a lot of time in the film room studying the different routes and some of the giveaways they can use to help identify the route.

While it isn't a good idea to always guess on the routes receivers run, it is good to be able to identify the routes.

This helps DBs get a step up on the receiver they're covering. 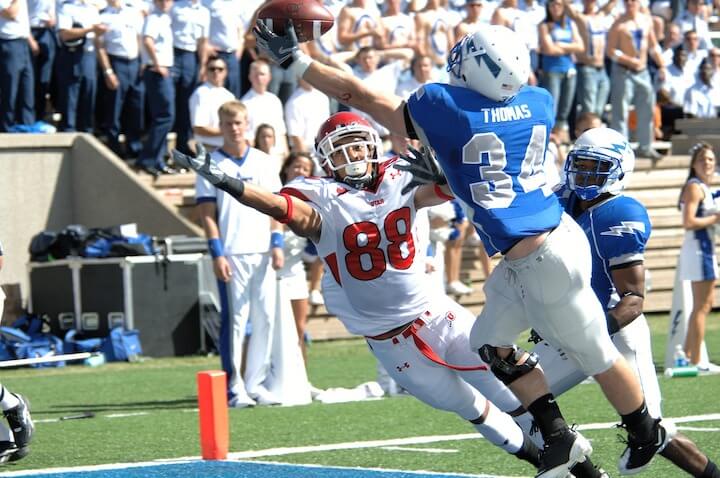 One of the most important jobs a DB has in pass coverage is disrupting the route a receiver runs.

He has to make it difficult for the receiver to get to where he wants to go, throughout the entire route.

He can do this in a number of ways:

If he's lined up tight to the line of scrimmage, he can *jam* receivers in the first five yards -- making it hard for them to even start their route.

Then, as he's running downfield with him, he can properly angle the receiver to certain areas.

Finally, they can get in front of the receiver's body, block his line of sight to the quarterback, and fight for the ball in the air.

#2. Avoid Getting Beat Over the Top

Defensive backs have to make sure that NO ONE gets behind them.

As mentioned earlier, there is often no other line of defense behind a DB, which makes it extremely important that he keeps all plays in front of him.

If he doesn't, it could easily result in a touchdown for the opposing offense.

The one major exception to this rule is for cornerbacks in certain zone defenses.

If receivers run a deep route, the CB might have to allow the receiver to do that, leaving him for one of the safeties to cover.

In this case -- and this case only -- the defensive back may let a player get behind.

#3. Must Not Miss Tackles

This goes along with keeping everything in front of him.

If they do, the ball carrier will have plenty of daylight ahead of him for a big gain or even a touchdown.

DBs won't always be able to make "sure" tackles on their own. If he can't, his responsibility is to make sure that the ball carrier stays in front.

He must angle his body so the ball carrier must run through or around.

DBs can use the sideline to force a ball carrier out of bounds, or they can simply force the ball carrier to run laterally toward the middle of the field, where other defenders are likely waiting to help. 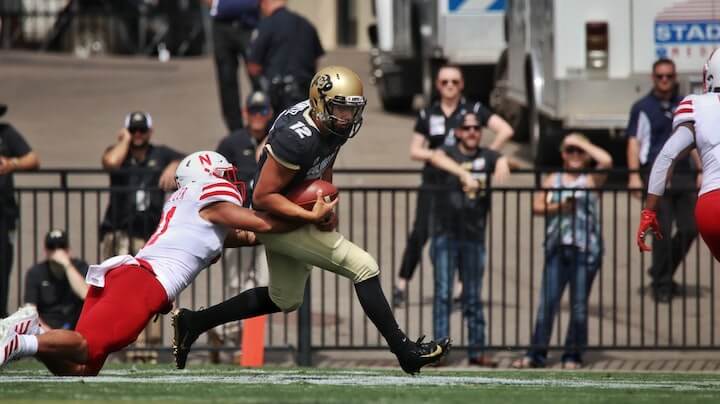 Footwork is one of the most important things DBs need to work on in practice.

It's essential that they master the skill of backpedaling, first and foremost, as it's not a natural motion.

Once they do this, they need to work on stopping and starting, and exploding after changing direction.

With all that moving around on the field, it's easy for a defensive back to get tripped up if he doesn't have good footwork.

Players who want to be great defensive backs need to think like a wide receiver.

And the best way to do that is to study great wide receivers.

In the film room, DBs should take time to pick up on the signs that a receiver may be running one route versus another.

He must know what the routes are, and where players are likely to end up with each route, depending on where the play starts.

By studying receivers, DBs will be better prepared to master their own game.

It's important for any player in football to build their overall body strength, as it is for defensive backs.

This position in particular, though, needs to build solid lower-body and core body strength, which will help them explode both from a standing position and as they quickly adjust on the fly.

It will also help them make better tackles, as much of the success here depends on strength and explosion from the lower body, not the upper body.

This isn't to say that defensive backs should ignore upper-body strength.

But the lower body is the key to building the necessary strength they will need.

Defensive backs get a lot of recognition on defense, and for good reason.

It's a very difficult and challenging position to play, as DBs are asked to do a lot of things all on their own.

Unlike a lot of other football positions on defense, DBs often rely on themselves without a lot of help from their teammates.

This means they have a lot less margin for error than some other positions.

In fact, DBs are often described as being alone on an island -- quite accurate.

If you want to be a great defensive back, pay attention to the traits, roles and responsibilities, and tips outlined above.

Then hit the gym, the film room and the practice field often, and you'll soon find yourself well on your way to being a solid defensive back.