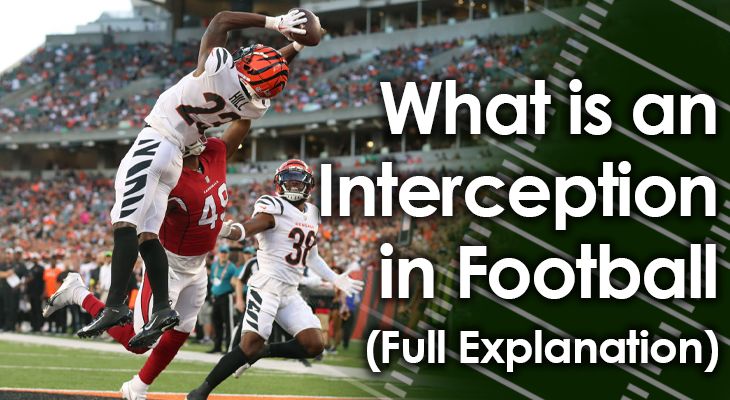 There are a number of ways a turnover can happen in football.

Turnovers occur when the defense is able to gain possession of the football while it's still live, and they can completely change the game.

One of the most common of these turnovers is the interception.

An interception occurs during passing plays when a defender is able to catch a pass originally intended for an offensive receiver.

It can happen at any point in the game, at any spot on the field, and by any defender on the field.

Let's take a more in-depth look at what an interception in football is, as well as what happens when one occurs.

What is an Interception in Football?

An "interception" is when a defender is able to catch a forward pass originally meant for a receiver.

It's called an interception because the defender literally *intercepts* the ball before it reaches its intended target.

Interceptions are sometimes referred to as a "pick," referring to the defender "picking off the pass" before it gets to the receiver.

As mentioned before, any defender is able to record an interception.

There are a few quick rules that apply to an interception, both in terms of how a player records one and what happens after an intercepted pass.

Rules for an Interception:

The rules for how an interception can be completed are quite simple...

a. Catching the Pass

First, the defender can catch a pass from the quarterback just the same way that any offensive receiver would.

The same rules apply for what constitutes a legal catch for defenders and offensive players.

This means that the defender must catch a forward pass in the air before it touches the ground.

He cannot trap the ball on the ground, or have it bounce off the ground and go into his hands.

If this happens, it will be an incomplete pass.

b. Stay In Bounds

Next, the defender must catch the ball legally in the field of play.

This means he must get both of his feet down on the field in-bounds after intercepting the pass.

For example, if he leaps into the air to make the interception one of his feet comes down out of bounds, it would be ruled an incomplete pass.

Other than these, there are no other rules for an interception in football.

Remember, it must be a forward pass that travels beyond the line of scrimmage and that the defender must catch it before a receiver does.

If the receiver catches a pass then drops it on the ground afterward, only to get picked up by the defender, it's ruled a fumble instead. 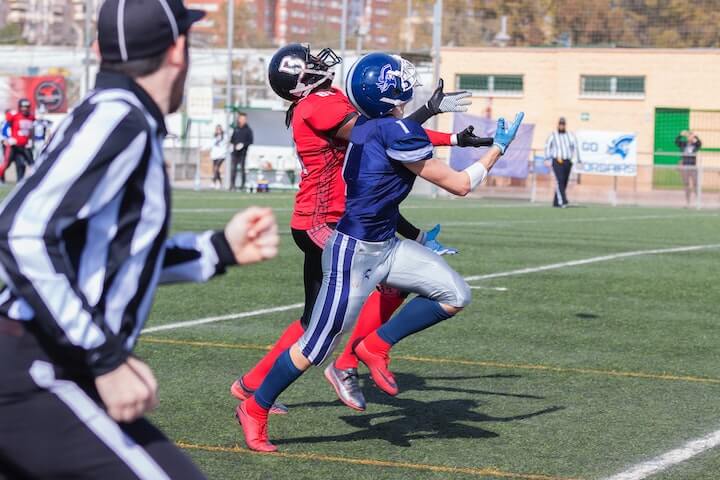 What Happens after an Interception?

Just like a completed pass to an offensive player, the ball is live after an interception has been recorded by a defender.

This means that the defender is able to advance the ball upfield until he is either tackled or forced out of bounds.

Football rules state that once an interception occurs, the defending team essentially becomes the offensive team.

So, defenders may block players on the offensive team as the defender who intercepted the ball tries to advance the ball.

This also means the offensive team instantly becomes the defending team, and they must try to either tackle the defender who is in possession of the ball or force him out of bounds to stop the play.

Once the play is over -- after the defender gets tackled or goes out of bounds -- his team's offense will take over at that position on the field.

They will have a first-and-10 from that spot.

Keep in mind that all the same rules for ball carriers apply to the defender after he records an interception.

He must hang onto the football, as he can fumble the ball if it's knocked loose.

He also can't throw the football forward, but he can pitch it back to a member of his team who is behind him. 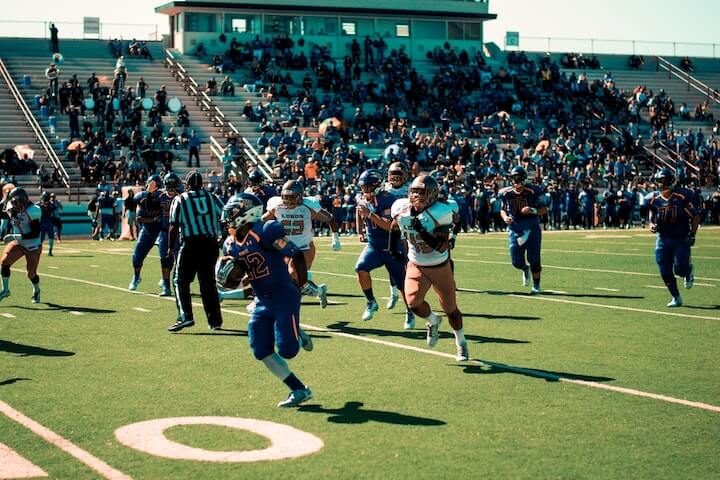 What is a Pick Six?

If you watch a game of football and an interception happens, one thing you might hear referred to is the "pick six."

This refers to when a defender makes an interception and then returns the ball all the way into the other end zone for a touchdown.

It's a "pick six" because the play starts with a pick (or an interception) and ends up with the defensive side scoring six points for their team (with the touchdown).

A pick six is one of the most exciting plays in all of football as it can completely turn games around.

The most exciting pick sixes happen late in games, or are very long.

For example, if the offense is driving deep into the defender's territory and a pick six happens, a defender might scamper 80 yards or more down the other side of the field to score for his team.

An interception in football is one of the most exciting plays in the sport.

It not only instantly results in a change of possession, but it allows the defensive team to try to advance the ball as deep downfield as possible -- and even potentially score a touchdown for their team.

Offensive teams always try to avoid throwing an interception, of course, while the defense always hunts for one on passing plays.

It's an exciting cat-and-mouse game that happens on all levels of football.