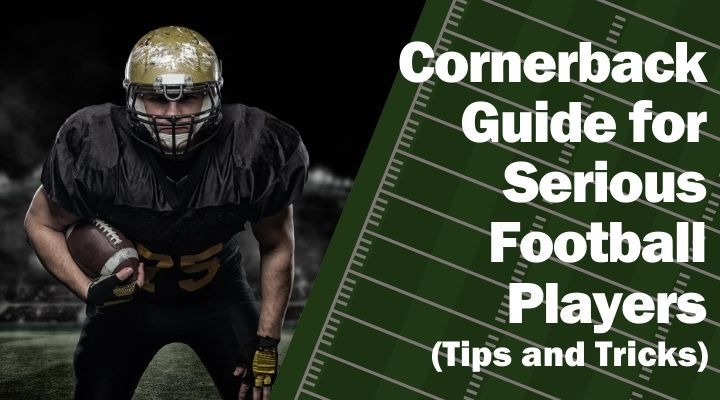 It's often joked that if a wide receiver doesn't have great hands, he becomes a cornerback.

To be truly great at their position, cornerbacks need to know how a wide receiver operates, what makes him tick, what routes he's likely to run in certain situations, and how he might adjust to try to get open or catch a pass.

Since cornerbacks are lined up across from wide receivers on almost every play, they must understand that position to do their job well.

Cornerback is one of the most important defensive positions on the field.

This is especially true in today's game of football that’s increasingly reliant on the passing game.

Cornerbacks are often matched up with wide receivers one-on-one, meaning there's no help in coverage.

This is a unique part of a cornerback's game, as many other positions have help from another player or two.

If a cornerback doesn't do his job, then it can lead to huge gains for the offense and even a touchdown.

In the NFL, some offenses will simply completely ignore the side of the field that a great cornerback is playing.

They’ll do their best to get their best wide receiver not matched up with that cornerback and/or they simply won't throw to that receiver.

Let's take a look at what makes up a great cornerback, from traits to roles and responsibilities, to tips for players who want to man the position. 5 Traits of a Great Cornerback

In this regard, "length" is considered good height and wingspan.

At one point, it was considered to be acceptable for cornerbacks to be on the smaller size. It wasn't odd to have a great cornerback being on the shorter side.

In today's game, however, with taller and taller wide receivers appearing, it's very important for great cornerbacks to be tall as well.

Those that are on the shorter side need to have great leaping ability to combat the receiver's height. And no matter how tall a cornerback is, great ones have some weight to them, too.

A cornerback measuring around 6 feet tall and weighing at least 200 pounds is ideal in the NFL, for example.

Without that height-weight combo, cornerbacks could easily be pushed around by bigger, taller, stronger wide receivers.

Reading the opening joke about a cornerback's lack of ability to catch a football might make you think this trait is odd.

But, of course, a cornerback doesn't have to catch a football to do his job. He just has to be good at making a play on thrown balls and knocking them down.

A cornerback's primary job is to cover his man so well that the quarterback doesn't even consider throwing to a wide receiver his way.

That's not realistic, though, that a cornerback will never face a pass.

When a ball is thrown to a receiver he's covering, a cornerback must do everything in his power to make sure that the ball isn't caught.

He can't outright tackle the receiver or make heavy contact with him before the ball reaches him -- otherwise, he'll be called for a penalty.

Instead, he must have what's called great "ball skills."

This is the ability to get to the ball before the receiver and put a hand on it so that it knocks the ball down or at least changes its trajectory or path to the receiver so that the pass attempt isn't completed.

Cornerbacks need to be quick and fast like wide receivers.

But unlike wide receivers, cornerbacks will do a lot of their "running" by backpedaling instead of running forward.

At the beginning of each play, cornerbacks and wide receivers will be facing each other.

This means that a cornerback will have his back to his own endzone which, in turn, means that he'll be facing away from where the wide receiver is going to be running.

The most effective way for a cornerback to defend is to backpedal (or run backward) until he knows for sure where the receiver is running.

Then, once he understands where the receiver is going, he can sprint forward to that spot. This requires a lot of agility.

The cornerback must backpedal quickly enough so that he gets "depth" behind his coverage, and then quickly stop, pivot, and sprint to the proper position based on where the wide receiver is running his route.

This isn’t a simple skill to learn.

All the skill and speed in the world won't allow a cornerback to catch up to a receiver who’s running by him on a Fly route -- or running across the field on an In route.

That's because the wide receiver gets a head start on every play. He knows where he's going at the snap of the ball, and the cornerback doesn't.

Then how can cornerbacks ever cover a receiver effectively?

The answer is with great instincts.

A cornerback needs to be fast, but he doesn’t need to be a great sprinter as long as he has great instincts.

He must be able to anticipate where the receiver is going to run his route based on a number of factors.

This might include the down-and-distance situation, what route the receiver is likely to run based on how he’s lining up, or what routes he likes to run.

The cornerback also needs to be able to read how a play is developing to know what route the receiver is going to run and then pounce on it right away.

Even in man-to-man coverage, cornerbacks aren't completely on their own.

A cornerback can use the field to his advantage when he's covering a wide receiver. For example, if a cornerback is lining up toward the outside of the field, he can use the sideline as another "defender."

By shading inside, he can force a receiver to run closer to the sideline to try to get open. This narrows the available field for the receiver which makes it harder to complete a pass.

Likewise, he can also force a receiver toward the inside of the field, where he might be able to get coverage or tackling help from a linebacker or safety.

A cornerback who has great field awareness will be using all the tools at his disposal to do his job well. A cornerback has a wide range of roles and responsibilities.

1. He Must Be Disruptive

A cornerback's primary job is to be disruptive in the passing game.

He can do this by making it difficult on the receiver he's covering to get open.

He can also be disruptive by putting fear into the offense, specifically the quarterback.

If the cornerback is constantly knocking down passes or even stepping in front of passes to get interceptions, a quarterback is likely to avoid throwing his way in the first place.

2. He Must Limit Damage

Of course, even the best cornerbacks in the game will have passes completed their way every once in a while.

A cornerback's job is to limit the damage that’s done when this does happen.

For a cornerback, it's all about quality and not quantity.

When completions are made his way, a cornerback needs to keep the receiver in front of him and limit how many yards the play goes for.

He can do this by making sure a receiver never gets behind him when running a route to ensure deep completions aren't made.

3. He Must Make Tackles

A cornerback's duties don't start and stop in the passing game. He must be a contributing tackler as well.

On running plays, cornerbacks must be able to shed blocks from wide receivers, so they can become contributors in the tackling game.

On some plays, cornerbacks might come face-to-face with a ball carrier.

His job in this situation is to do one of four things -- make the tackle himself, hold the runner long enough until help can arrive, force the runner inside where other teammates are waiting, or force the runner out of bounds.

A cornerback can't be a liability in the tackling game. Otherwise, he’ll be a detriment to the defense more often than not.

4. He Must Communicate with Others

Because a cornerback will be in a three-point stance before the ball is snapped, he will have a good view of the entire field.

Part of his job is to communicate anything he sees to other players who are responsible for covering the same parts of the field as he is.

He’ll work in tandem with outside linebackers, safeties, and other cornerbacks a lot.

Cornerbacks need to be in constant communication before plays so that everyone is on the same page as plays begin. 3 Tips for a Cornerback

Here are some tips for players who want to be a good cornerback:

The best way to become agile is to work on your footwork.

Cornerbacks are constantly starting and stopping, changing direction, and bursting off stationary positions into dead sprints.

Some of the best drills for this are shuffling drills where you move your feet back and forth, side to side around cones, or in designated areas of the ground.

Strengthen your core and your lower body so that you'll have the strength necessary to burst and explode.

2. Learn How to Backpedal

This is one skill that’s pretty unique to cornerbacks.

While linebackers and safeties will backpedal from time to time, cornerbacks are the ones who do it the most.

Running backward is certainly an acquired skill. It's not natural, and it takes plenty of practice.

If you want to be a great cornerback, you're going to have to learn how to backpedal really well.

The good news, though, is that you don't have to have the finesse that wide receivers do in this arena.

You don't need to corral the ball; you only need to touch it.

You can work on this by backpedaling and running quickly without looking toward the backfield, then having someone act as a quarterback and throw the ball your way.

You'll then need to look up quickly, see where the ball is headed in relation to where you are, and then adjust and try to make contact with it.

Cornerback is one of the most important positions on a defense.

These players are often responsible for covering receivers all on their own. And if they don't do their job properly, it can result in huge plays for the offense.

This and backpedaling are two skills that not a lot of other players have to learn in the game of football.

In addition, cornerbacks can't just concentrate on being good in the passing game.

They must be solid contributors in the tackling game, learning how to use the field to their advantage so they can get the most help possible.