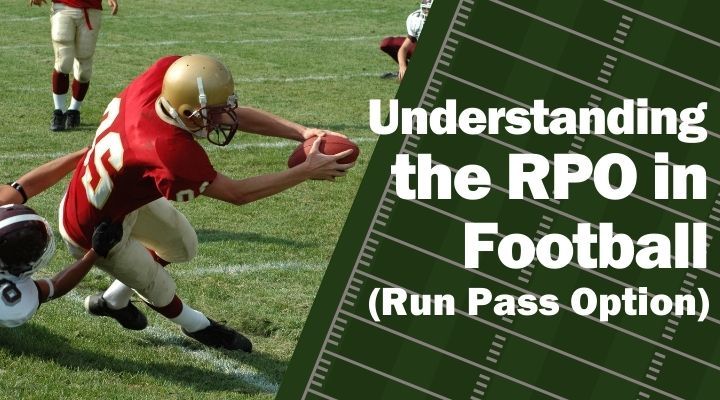 The Run-Pass Option, or RPO, has become one of the most popular offensive play call strategies in football today.

A strategy that was once only used in college football has made its way to the NFL.

More and more teams are integrating it into their offensive playbook every year in new and innovative ways.

The RPO takes concentration, a good quarterback who can read plays quickly, and other players who can make adjustments on the fly.

The RPO is pretty simple to define... but when the RPO is called, and how to execute it properly, is a little more complicated.

It's a play that gives the quarterback the option to either hand the ball off to a running back or make a quick pass to a receiver instead.

The RPO is designed to keep defenses off balance. A misdirection play that's meant to keep defenders on their toes, guessing on whether the play is a pass or a run.

Let's take a closer look at what the RPO is and how it's run. What Is an RPO in Football?

That "option" for which play is run lies with the quarterback.

The quarterback is the sole person responsible for choosing which play to run, and he'll make that decision at different points depending on the play call (more on this in a bit).

The RPO is called exclusively out of a shotgun formation and is used in conjunction with most spread offenses.

The quarterback will be lined up roughly 5-7 yards in the backfield with the running back a few steps to his left or right.

Every RPO play will start the same way -- as a run play.

Offensive linemen will block as if it's a run play, driving their defenders forward.

They do have to make sure not to go too far downfield, though, so they’re not called for a penalty in case the quarterback decides to pass.

Similarly, the running back will treat the play as if it’ll be a run.

He’ll anticipate that he’s getting the hand-off, running full speed toward the quarterback and extending his arms to receive the ball.

Wide receivers will often run quick, shorter routes once the ball is snapped.

Occasionally, one of the receivers will run a Fly route straight downfield to set up a big passing play.

When the ball is snapped, the quarterback will extend the ball for the running back to take.

He'll put the ball in the proper position for a handoff, but then he'll have a choice -- he can either complete the handoff for a running play or pull it back and throw it for a passing play. How Does the Quarterback Choose Which Play to Run?

There are two main types of RPOs:

The names are indicative of when the quarterback decides to run or pass.

In a pre-snap RPO, he'll make that decision before the ball is snapped.

In a post-snap RPO, he'll make it after it's snapped.

In a pre-snap RPO, the quarterback will be focused on how the defensive is aligned in order to make his decision.

A common example is if the offense is running a Trips formation, which will have three receivers lined up on one side of the field.

The alignment of the defenders opposite these Trips receivers is what the quarterback will analyze when making his option decision.

If there are two defenders lined up to cover the three receivers, then the quarterback will often throw the ball.

If there are four defenders, then the quarterback will often hand the ball off to the running back.

Simply put, the quarterback is looking at the numbers to see if the scales are tilted either way -- either in the receivers' favor or in the defenders' favor.

In cases where the numbers are even on both sides, he'll make the option call based on the game situation as well as the rest of the defensive alignment.

In a post-snap RPO, the quarterback will make the option decision based on the initial action of one of two players.

Depending on the play, he’ll focus on the middle linebacker or strong safety.

If this "key" player moves up toward the line of scrimmage once the ball is snapped, then the quarterback will often bring the ball down and throw the ball.

If this key player moves back from the line of scrimmage or even stays put, the quarterback will often hand the ball off for a running play.

The reason behind this is simple.

If this key player moves forward, it’ll open up space in the field for receivers to gain yardage with a pass play.

If this key player stays put or moves back, then there will be more room for a running back to roam after a handoff.

That's the beauty of an RPO.

It takes advantage of the weakness a defense is showing after the line up in their formation for the play.

The best way to clearly understand how RPOs are run is to take a look at the Xs and Os.

Here are three RPO plays, with an explanation of the quarterback's reads. This is a pre-snap RPO where the quarterback is looking for the "leverage" that the offense has against the defense.

As mentioned above, the quarterback is going to look at the alignment of the defense, match that up against the passing route that each receiver is set to take, and then decide who to throw the ball to (or whether to hand it off).

In this play, you'll see that the two cornerbacks are playing press covering against the X and Z wide receivers, with both safeties lined up deep for extra help.

With both of these receivers set to run Fly routes, they’re not a good target on this play.

The F and Y receivers, though, do have leverage in terms of width with their defenders.

The Will and Sam linebackers are responsible for covering these receivers, and each is lined up off the line of scrimmage and to their inside shoulder.

Since both the F and Y are set to run quick screens to the outside, they’ll have what's known as width leverage.

In this instance, the quarterback's read should be to throw the ball to either the F or Y receiver and let them run in space. This type of play is a post-snap RPO.

Remember that this means the quarterback will make his read after the ball is snapped, based on the movement of the key defender.

In many cases, you can combine a pre-snap leverage-based RPO with a post-snap movement-based RPO.

The first read on this play will be pre-snap.

The quarterback will look at his X receiver and see press coverage with a strong safety over top. This is not a good pass option based on the pre-snap look.

The next pre-snap read is also to the left, with the F receiver. He’s set to run a bubble screen toward the sideline.

In this example, he's not a good option either, since the free safety has come up to help out in coverage. Because of this, the play will switch to a post-snap movement-based RPO.

The quarterback will read the key defender as the Mike linebacker in the middle of the field.

In this play, if the Mike moves to his left (toward the Y receiver) or backs away from the line of scrimmage, then the quarterback will hand the ball off to the running back.

If, however, the Mike moves toward the line of scrimmage or his right, then the quarterback should throw the ball.

Both of these routes will seek to take advantage of the open spot over the middle of the field that the Mike has vacated.

Each of these receivers will be facing single coverage if this happens. This is a pre-snap RPO where the quarterback makes his decision based on simple numbers in "the box."

This part of the field is referred to as the area where the defensive linemen and linebackers normally line up.

The initial play call is a run, and each run play can "handle" a certain number of defenders in the box.

It's a simple math analysis.

If a play can handle six defenders in the box, then the quarterback should hand the ball off to the running back if there are six or fewer defenders lined up in the box.

If there are seven or more players on the box, the play then becomes a pass.

For this example, we'll assume that the play can handle six men in the box.

As you can see in the chart, there are four defensive linemen, the Will, and the Mike linebackers in the box, making for six total.

The Sam and both safeties are too far from the line of scrimmage to be considered in the box.

Therefore, the quarterback should read run.

If either of the safeties or the Sam crept in toward the line of scrimmage, though, then the quarterback could read pass.

In that instance, the Y wide receiver would need to read the opening and direct his route that way, since he'd be the primary receiver on this play.

If the Sam goes toward the line of scrimmage, the Y would break off the route to the inside of the field.

If either safety goes toward the line of scrimmage, then the Y would break off the route to the outside of the field.

Run-Pass Option (RPO) plays have made their way into the mainstream discussion of offensive football at all levels of the game over the last few years.

What was once only relegated to high school or college football is now prevalent in the NFL as well.

That's because coaches at the highest level have realized the immense benefits that RPOs give to the offense.

They constantly keep the defense guessing, since it's very hard for them to plan for what's coming.

It's also tough on the defense because these are quick-hitting plays -- especially when they’re passes.

To run RPOs effectively, though, your team must have a smart quarterback who can read offenses and make quick decisions on the fly.

Other players on the offense also must be smart, agile, and able to make adjustments themselves.

RPOs are certainly not straightforward plays.

But if you can teach them successfully to your players, they can be a great way to separate your team from others.