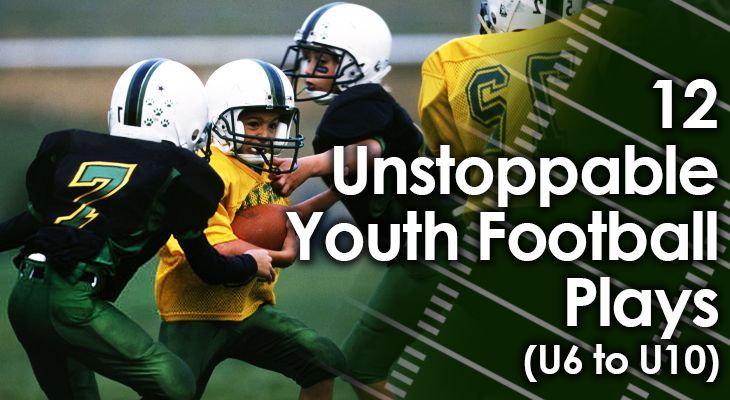 They might watch a lot of professional or collegiate football to get ideas for plays they can integrate into their own playbook.

However, a lot of the offensive plays called at the top levels of the game don't work too well at the youth level.

The main reason for this is that younger quarterbacks typically lack the arm strength to throw big passes downfield.

This doesn’t mean that youth football teams teams should just scrap the passing game entirely from their playbook, though...

It just means that they have to utilize pass plays in different ways.

Below are 12 unstoppable youth football plays you should use.

If you're looking for a way to kickstart your offense, add the following unstoppable youth football plays into your playbook.

Every team can benefit from these plays, some of which you can alter slightly here or there to give your team a unique look. 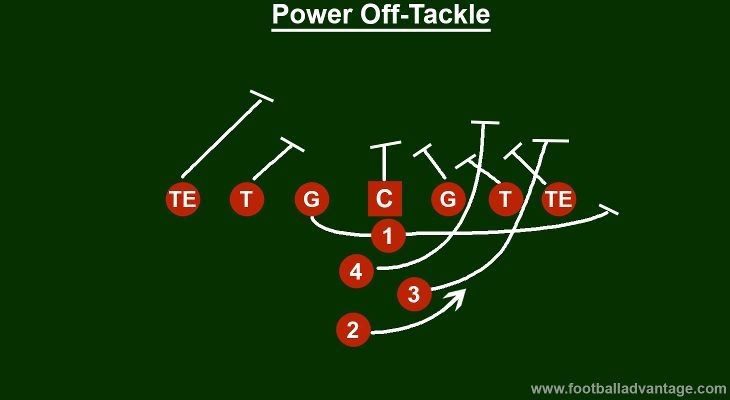 It involves loading the field to one side with lead blockers and then running that way.

It's a very simple play, yet it can be highly effective over and over again.

Another major benefit to this play is that it teams can run it out of multiple formations. Whether your team's base offensive formation is the Power I, Wishbone, or T Formation, you can easily have a version of the Power Off-Tackle that will work.

All of your linemen will block down away from the play side.

So if the run is going to the right, then the job of every lineman is to block his defender to the left side of the field.

The only exception is the guard on the opposite of the play side. His job is to pull behind the line and head to the outside gap.

Most youth football teams will have three players in the backfield.

Their job is to pick up the first defender in their site.

The player taking the handoff from the QB will head toward off-tackle and choose between the C and D Gaps, based on which one is more open. 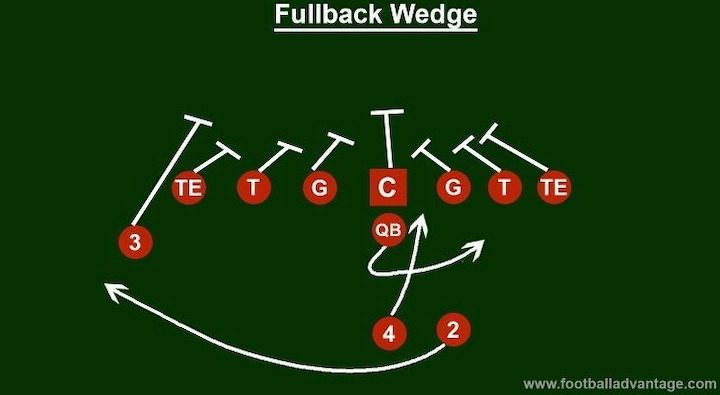 This is another big power running play in youth football.

It's designed to make defenses THINK the Power Off-Tackle is coming...

Only this time, the handoff will be to the up-man.

The blocking will converge on the center of the field this time, since the handoff is going to go right up the middle.

The goal is to push the defenders off the line of scrimmage as much as possible.

The two RBs who aren't taking the handoff will simply serve as decoys. They'll typically fake running toward the off-tackle to make defenses think the play is going outside.

But, at the snap, the quarterback will turn around and quickly hand the ball off to the fullback, who will aim to run it right up the gut.

This is a play that often catches defenses by surprise and gains a lot of yards that way. 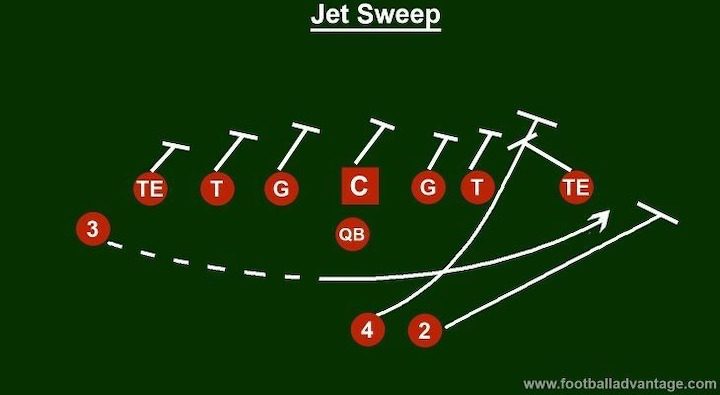 Building off the same type of formation and look, the Jet Sweep will seek to throw defenses off.

The opposition will think it's a slower-developing play, but the Jet Sweep is a quick hitter toward the outside.

For this play, the 3 back will line up split out wider to one side of the field.

He'll almost be in a Wing Back position, on a diagonal from the outside shoulder of the tight end.

Before the snap, the quarterback will send this player in motion to the other side of the field.

Then, the quarterback will aim to snap the ball just as the motion man is about to run behind him.

The quarterback will take the snap, turn toward the side the motion man is running in, and hand it off to him.

This 3 back will then aim to take the ball all the way to the outside, using the momentum he has from the pre-snap motion to get a step ahead. 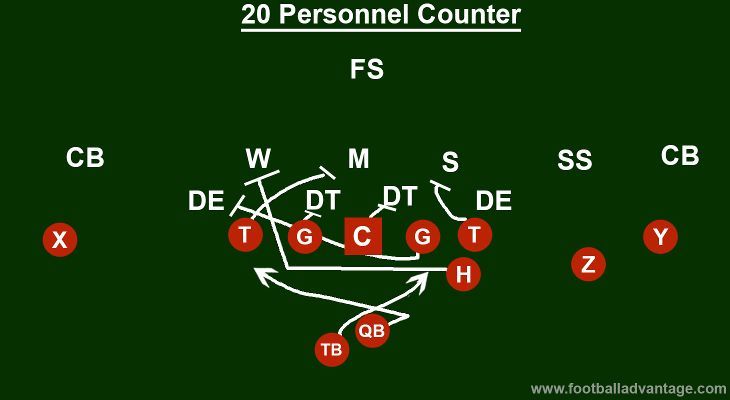 The Counter play is one of the most effective youth football plays.

It's a misdirection involving the quarterback faking as if he's keeping it and run to the right (or left), and then quickly cutting back and going the opposite direction.

The quarterback could fake the handoff to the tailback at first if he wants to add another element of misdirection.

The play will start out of the 20 Personnel, with three wide receivers on the field to spread out the defense.

This play includes a trap block, with the right guard quickly pulling behind the center and heading on an angle to block the left defensive end.

Everyone else will block down to the right, away from where the QB will be running. 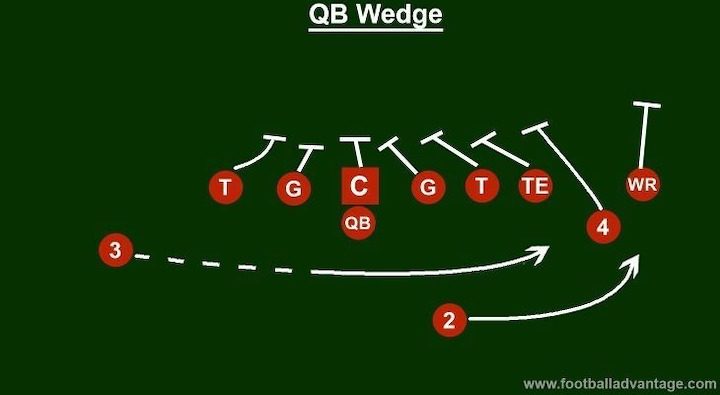 One of the most unstoppable youth football plays that's great for short-yardage and goal-line situations is the QB Wedge.

The entire idea is to make the defense think that multiple backs may be taking a handoff to the outside, only to have the QB keep the ball after the snap and run straight up the middle

There is one tight end on the field on this play, as well as a wide receiver out a little wide to the right.

The 3 back will go in motion from left to right before the snap and will fake as though he's taking a sweep handoff.

The tailback will also sweep to the right as if he's going to take the toss.

The QB will simply take the snap, take a quick step straight back to fake a normal drop, and then tuck the ball and run it straight up the gut. 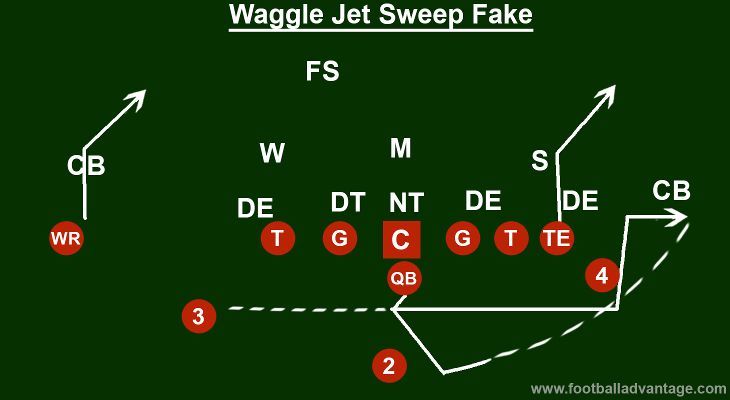 The QB Waggle is another great youth football play, and this one will work in an element of surprise with the Jet Sweep fake.

Pre-snap, the 3 will go in motion from left to right.

At the snap, the QB will fake the handoff to him and then drop back to the right on an angle.

He'll then step up in the pocket to the right, with his primary receiving option being the same 3 receiver he faked the sweep handoff to.

He'll also have two other receiving options -- the wide receiver and tight end, who will both run Slant routes to the right. 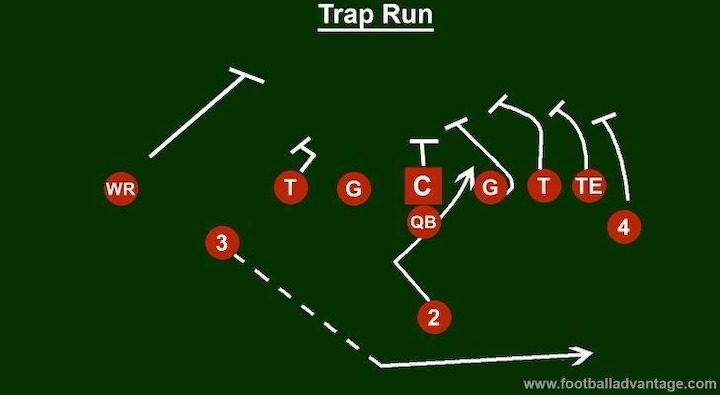 The Trap Run is another great quick-hitting run up the middle.

While there's no misdirection at the snap in terms of the backfield, there is a little confusion caused by the offense here.

The 3 will go in motion from left to right pre-snap to provide a look for the defense.

The left guard will perform a trap block on the right defensive tackle, looping behind the center and going through the A Gap to pick up his block.

The right guard and center will double-team the nose tackle to create a whole in the right A Gap for the back to run through.

The QB will hand the ball off to the running back who will head to the left A Gap at first, then do a quick cut-back in the backfield to shift to the right A Gap 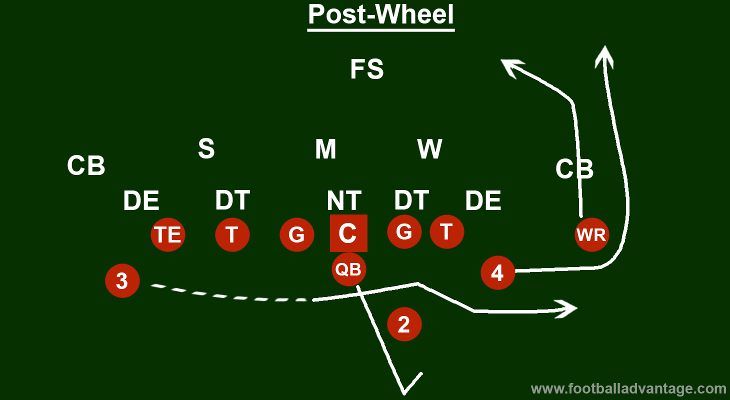 Combination routes are the best for youth football, as they force defenders to make quick decisions in coverage.

In this play, the combo routes are the Post by the Wide Receiver and the Wheel by the 4.

At the snap, the quarterback will sprint back on an angle to his right and turn to throw, looking for the 4 on the Wheel route as his primary target.

Pre-snap, the 3 will run in the same motion as many of the other plays on this list. 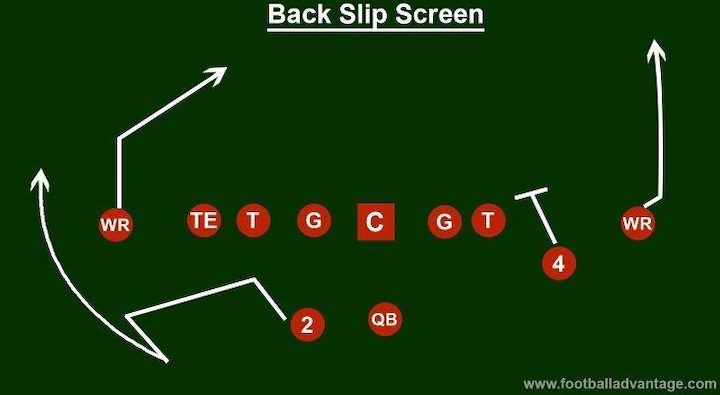 On this play, the running back will be running a Slip Screen.

The quarterback will be in shotgun, with the wide receiver split out wide to the right and the 3 wide to the left to create space, and lead blockers.

At the snap, the three offensive linemen on the left side of the field will slide horizontally to the left, count to 3, and then release to get downfield and serve as lead blockers.

The 3 will run a Deep Post route to the middle as a decoy.

The quarterback will take a deep drop straight back, faking that he's going to throw the ball deep.

The running back will take his time and run on an angle to the left, then drop back more to the left to take the screen pass.

He'll then aim to run down the left sideline to daylight. 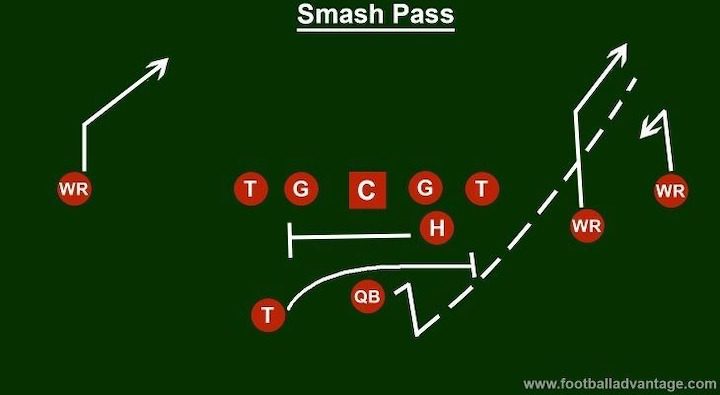 The Smash Pass uses a big formation and multiple fakes in the backfield to create confusion, with the goal being a longer pass to a tight end.

Both tight ends on this play will run Post patterns to the right.

The wide receiver split out wide right will run a Quick Hitch to create some room for the routes behind him.

At the snap, the quarterback will open to his left and fake handoffs to both the 2 and the 3.

Those players will be faking runs in opposite directions so they cross each other, blocking the eyes of the defenders.

The QB will then turn toward his right, plant his feet and seek to hit one of his deep TE routes. 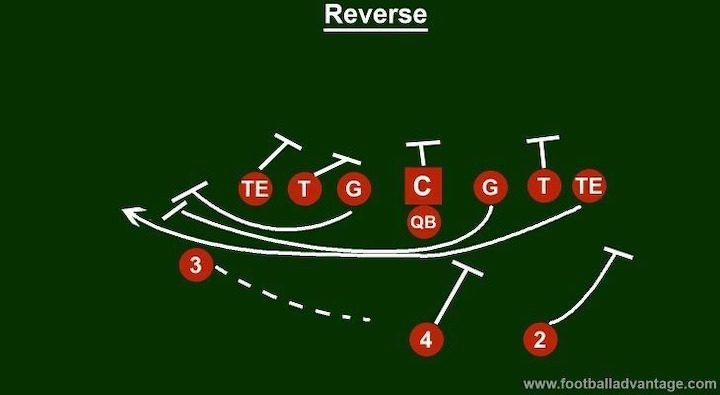 Another unstoppable youth play is The Reverse.

It uses the different looks of other plays to cause confusion and instantly change the point of attack.

Out of the Wing-T, the 3 will go in motion from left to right.

The quarterback will take the snap and fake handoffs to the 3 and the 4, who will line up directly behind him.

Immediately at the snap, the receiver from the right will peel back and run in the backfield to the left.

He'll then take the handoff from the quarterback, and sprint to the outside left of the field. 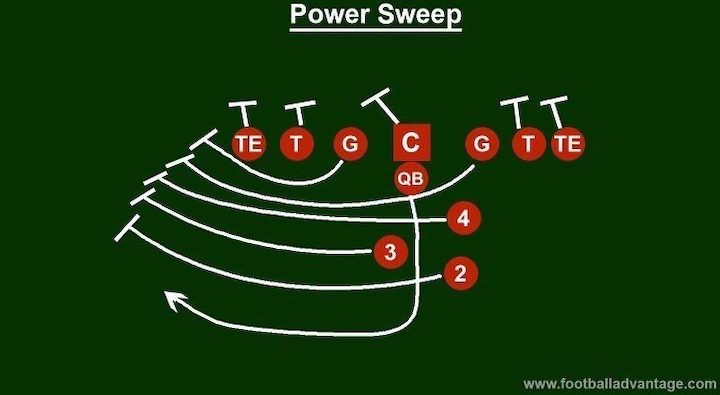 The final unstoppable youth football play is the Power Sweep.

The same concepts of the Power Off-Tackle applies here, except the goal is to have the ball carrier go way outside, with plenty of lead blockers in front of him.

On this play, the quarterback will keep the ball and be the runner.

At the snap, he'll open to his right to fake that he's going that way, but then loop around and run to the far left outside of the offense.

He'll have plenty of lead blockers in front of him.

All three running backs will loop to the left to get out in front of the quarterback.

The right guard will also pull to the left for a trap block. 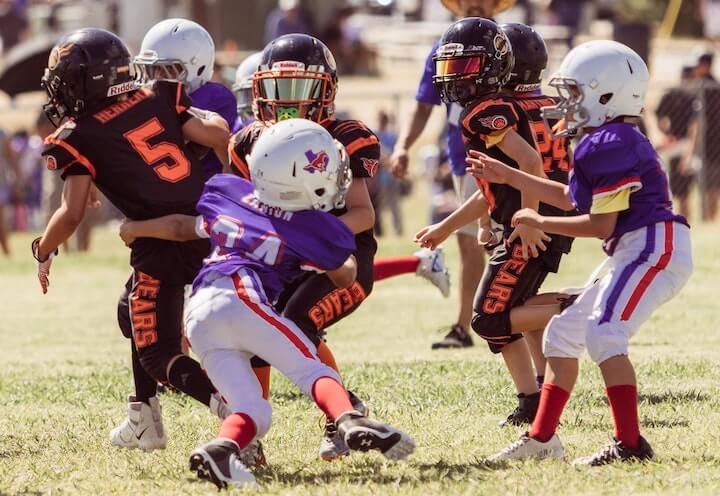 Above are 12 unstoppable youth football plays that every offensive coach should work into their playbook.

Start with these plays as you're building your attack plan, and then use these plays to branch out from there.