What is a Post Route in Football? (Full Explanation) 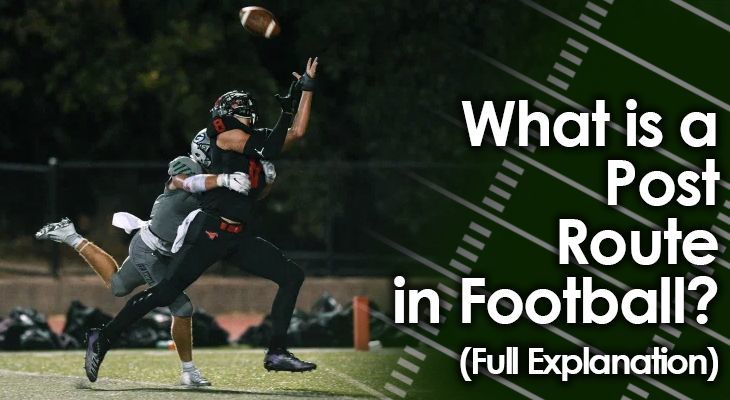 The Post route is one of the 9 basic passing routes that make up the route tree.

It's a deep passing route that's designed to result in a long completion or, at the very least, attract a lot of attention from a safety.

It requires receivers to have a lot of speed to create separation between defenders.

It also requires the receiver to make a nice cut move to fake out the defender, and keep him guessing as to which way the receiver is going.

In more advanced levels of football, the Post route is used as a sort of freelance route.

This means that the quarterback can throw to an area of the field where he sees an opening, and the receiver's job will be to adjust off his route to go to where the ball is thrown.

This is only recommended for advanced levels of the game, though, when the quarterback and receiver are on the same exact page.

Let's take an in-depth look at what the Post route is and how to run it. The Post route is designed to cause disruption deep down the field.

It's often most effective against man-to-man defensive coverage, or when the safeties are playing a type of zone coverage over the top.

At the same time, it can be extremely effective against pure zone coverage, as it requires at least two defenders to pay attention to the receiver running it -- since he'll be entering multiple "zones" on the field during the route.

The primary objective of the Post route is to complete a long pass over the middle of the field.

The receiver will use his speed to initially create separation from the cornerback lined up opposite him.

Then, after he's gotten at least 10 yards of depth, he'll angle his route toward the middle of the field to gain lateral separation.

Along his way, the receiver will also likely draw attention from one of the safeties.

If he doesn't, then it'll be a pure foot race between the receiver and the cornerback toward the end zone.

The quarterback could throw him the ball at this point, if he's open, for a mid-range completion.

The Post is really designed, though, for the receiver to catch the ball at the top of the route.

This would mean the receiver would run at least another 10 yards before the ball ends up in his hands.

This would require the safety to make a mad dash from his position to catch up to the receiver, and then run with him deep.

Even if the Post route doesn't result in the receiver getting open, it can still be extremely effective for the offense.

If nothing else, the Post route will clear out one side of the field.

If the receiver isn't open, that means at least one defender has followed him deep on his route.

This would eliminate a cornerback or safety from covering that side of the field for shorter routes.

It's also possible that both the cornerback and safety are tied up with the receiver running the Post, opening up even more holes for other receivers. The Post route is a slight combination of a Go route and a Slant.

It's not technically a combination route, though, because it doesn't integrate exact details of either route.

At the snap, the receiver running a Post will sprint directly ahead. His job is to try to gain separation from the defender lined opposite of him right away.

When he gets about 15-20 yards from the line of scrimmage, the receiver will then angle toward the middle of the field to start the next part of the route.

This is the part that's similar to the Slant. However, the angle shouldn't be as sharp as that of a Slant.

Instead, the receiver should aim to angle at about 45 degrees. This should put him facing close to the middle of the end zone, and not one of the corners.

When he goes to make this cut, he'll do so by putting pressure on his outside foot and pushing off toward the middle of the field.

He can juke the defender by faking a move to the outside or straight ahead.

This would potentially give him some more separation.

Once he makes the cut, he should continue toward the end zone at that 45-degree angle, sprinting as fast as he can.

As soon as he makes the cut, he should also be peaking back to the quarterback to see if he's going to be thrown the ball.

Ideally, the quarterback will release the ball soon after the receiver makes this cut, leading him to a spot in front of the receiver.

Since the Post is a deep route, the receiver needs to be prepared to make adjustments to his route if necessary.

He may need to cut off the route, adjust to the left or the right, or straight up the field depending on the trajectory of the ball.

The Post route may be a basic route on the route tree, but it can be a devastating play for the defense.

When executed properly, the Post route can completely change a game, as it will result in a deep pass completion.

Many times, a well-run Post route will end up with the receiver celebrating with teammates in the end zone.

Even if the Post route doesn't result in that receiver getting thrown the ball, though, it can still be extremely effective.

If nothing else the Post route will draw significant attention from a cornerback and safety.

This will, in turn, open up space across the middle of the field and toward the outside for other receivers to roam free.