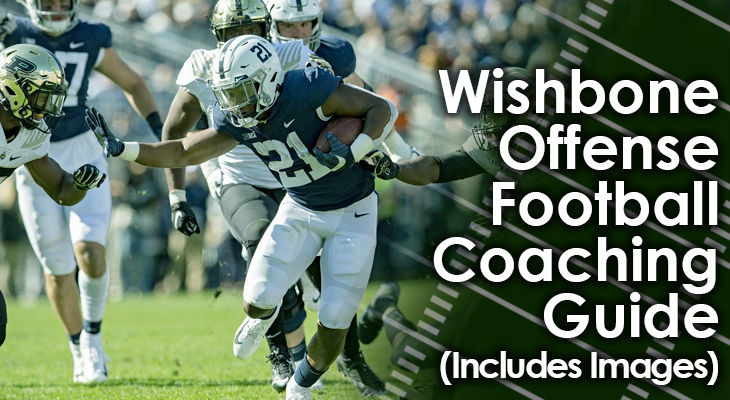 The Wishbone offense was one of the most popular offensive formations in the 1970s and 1980s, especially in college football.

The offense gets its name because of how the players are lined up in the backfield.

A fullback lines up directly behind the quarterback, with two running backs flanked to either side.

The four players line up in what appears to be an inverted Y, or a wishbone, which gives the name to the offensive system.

The offense is a run-heavy formation that takes advantage of misdirection plays and confusion to open holes for the running backs.

While the formation isn't used as much at the professional or even collegiate levels nowadays, there are still some teams that run it.

And, more importantly, it's still a great offense for youth football teams that are learning the game.

Who Should Use the Wishbone Offense?

Teams with Solid Running Backs — If your team has a lot of players who make for good running backs, then a Wishbone offense could be right for you. There are three backs on the field at all times in the Wishbone, necessitating that kind of personnel.

Teams Without a Great Throwing Quarterback — If your team doesn't have a quarterback with a great arm or who can throw with accuracy, then the Wishbone might be the right offense for you. The Wishbone relies on the run much more than the pass, although the best Wishbone offenses can throw the ball, too.

Teams With a Quarterback Who Can Run — The Wishbone offense can add another wrinkle with a quarterback who is good at running the ball. If this is the case, then there will be four players in the backfield at all times who could carry the ball on a running play.

Who Should Not Use the Wishbone Offense?

Teams With Good Passing Quarterbacks — If your quarterback has a great arm, doesn't run well and is more of a traditional pocket passer, then the Wishbone is probably not for you.

Teams Without a lot of Running Backs — If your team is heavier on wide receivers than it is on running backs, then the Wishbone probably isn't a good fit. Instead, you might opt for some type of spread offense, as a lot of teams do today.

Teams With Smaller Offensive Lines — While mobile offensive linemen are always a good thing for the Wishbone offense, it is a power running game. Because of this, you'll need offensive linemen who can move bodies and who are good at run blocking. 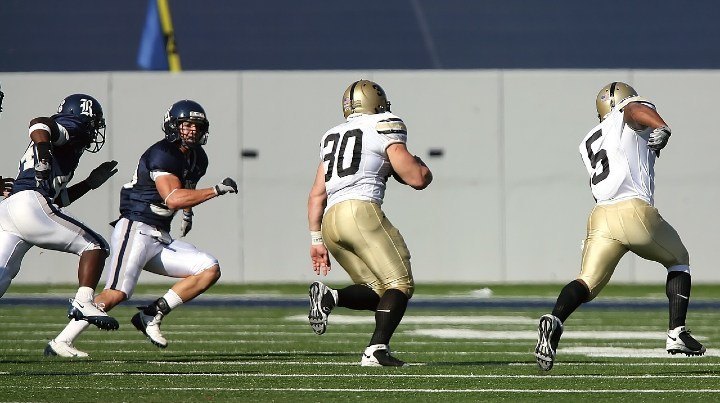 The base personnel will be roughly the same on every single play that’s run out of this offense.

That’s one of the ways that the offense will hide the plays it’s running.

While the below is a general guideline for the base personnel, some coaches will make slight alterations by adding a tight end to the formation in place of a wide receiver.

Here is the more traditional personnel in a Wishbone offense:

The Wishbone offense will utilize a similar formation on every play so that the defense is unable to predict what the next play will be based off how the players are lined up.

This allows the offense to switch it up between Triple Option run plays, traditional run plays and even passing plays.

The standard formation for all Wishbone plays are:

Center (C): Starts over the ball in his normal position

Guards (OG): One stands on each side of the Center in their normal positions.

Tackles (OT): One stands on each side of the Offensive Guards in their normal positions.

Quarterback (QB): Lines up directly under the Center to take the snap.

Fullback (FB): Lines up directly behind the Quarterback, about 2-3 steps behind him.

In order to truly see the how the Wishbone can be run in all its glory, we’ll need to take a look at both a passing play and a running play.

First, we’ll take a look at a running play that has the typical formation so that we can see what the base looks like.

Then, we'll take a look at a passing play with a slight variation of the formation, so that we can see how coaches can make changes. 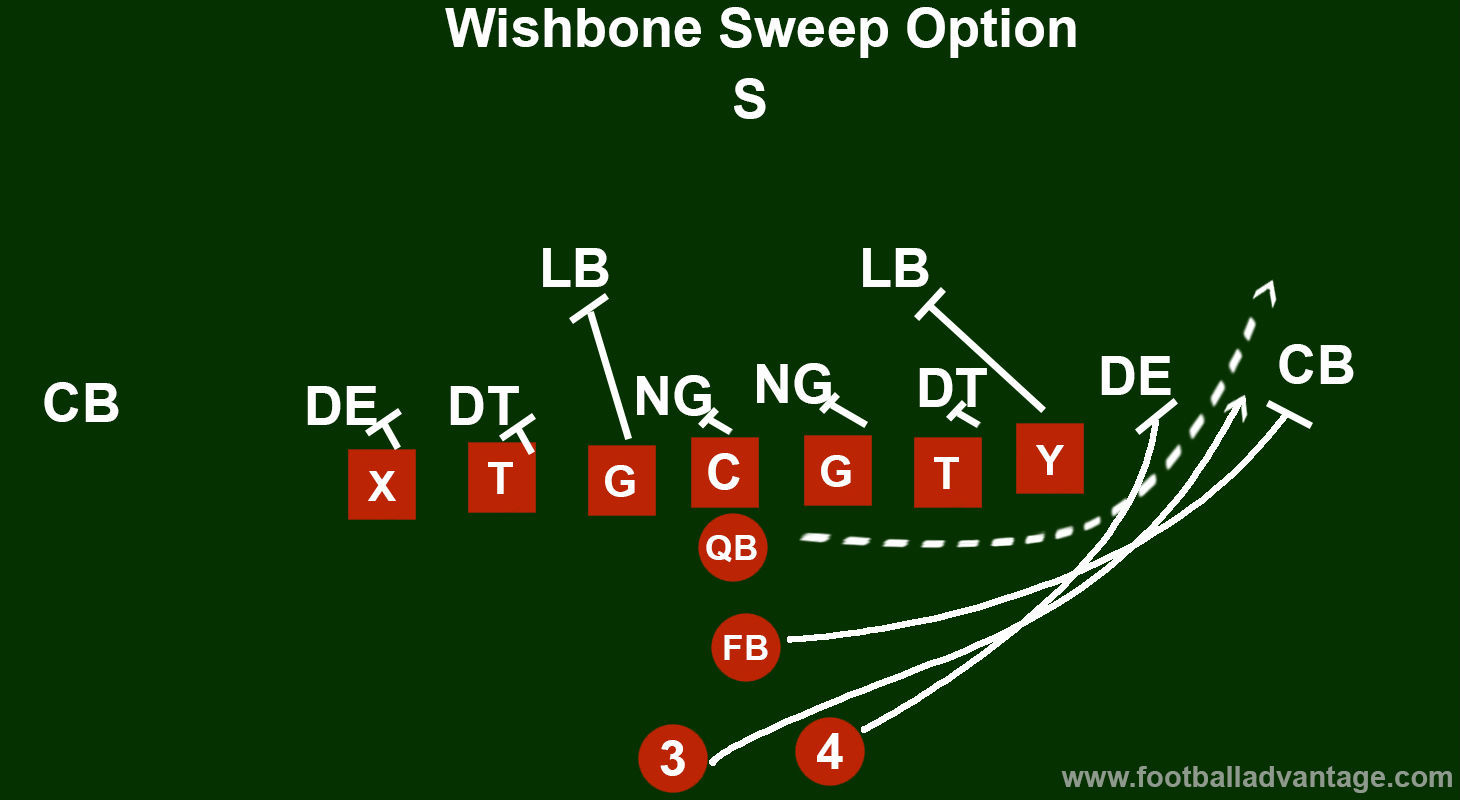 In this running play, the offense will line up in the traditional formation, with all players at their normal positions, except the wide receivers will be substituted for tight ends who will play tight to the formation.

This play will often be run when the offense is looking to gain medium yardage, with the potential to hit a really big play, based on the fact that it is an option play.

The theory here is to eliminate one of the defenders without even having to block him, since the defensive end on the strong side will have to make a decision as to where he will go.

The quarterback will need to read the actions of this defensive end before he decides whether he will hand the ball off to the Running Back to the left, or keep it and run it himself.

Offensive Line: At the snap of the ball, each offensive lineman will slide to his right quickly and block the defender lined up opposite him to the left. The idea is to push the defenders away from the right side of the field, which is where the backs will all be running.

Fullback: The Fullback's responsibility on this play is to block the cornerback lined up on the right side of the field. His job is to try to block him to the outside, toward the sideline, which would open up a hole between the defensive end and the cornerback.

Running Back (4): The Running Back lined up to the right of the Fullback will have blocking responsibilities on this play. His job is to get to the line of scrimmage as quickly as possible and pick up the defensive end on the right side, who the Y let go. His job is to try to block him down to the left, just like the other offensive linemen are doing.

Running Back (3): The Running Back lined up to the left of the Fullback serves as the main handoff option for the Quarterback. At the snap, he will take a bowed route to the right side of the field, aiming for in between the defensive end and the cornerback. He will be ready for a pitch from the Quarterback.

Quarterback: At the snap, the Quarterback will head directly down the right side of the line of scrimmage. He has two options on this play. First, if he sees that the defensive end is crashing down the line of scrimmage toward him, he will pitch the ball to the Running Back (3). If he sees the defensive end go cheat out to the right in anticipation of the pitch, he can decide to keep the ball himself and run upfield, through whatever hole the blockers have created. 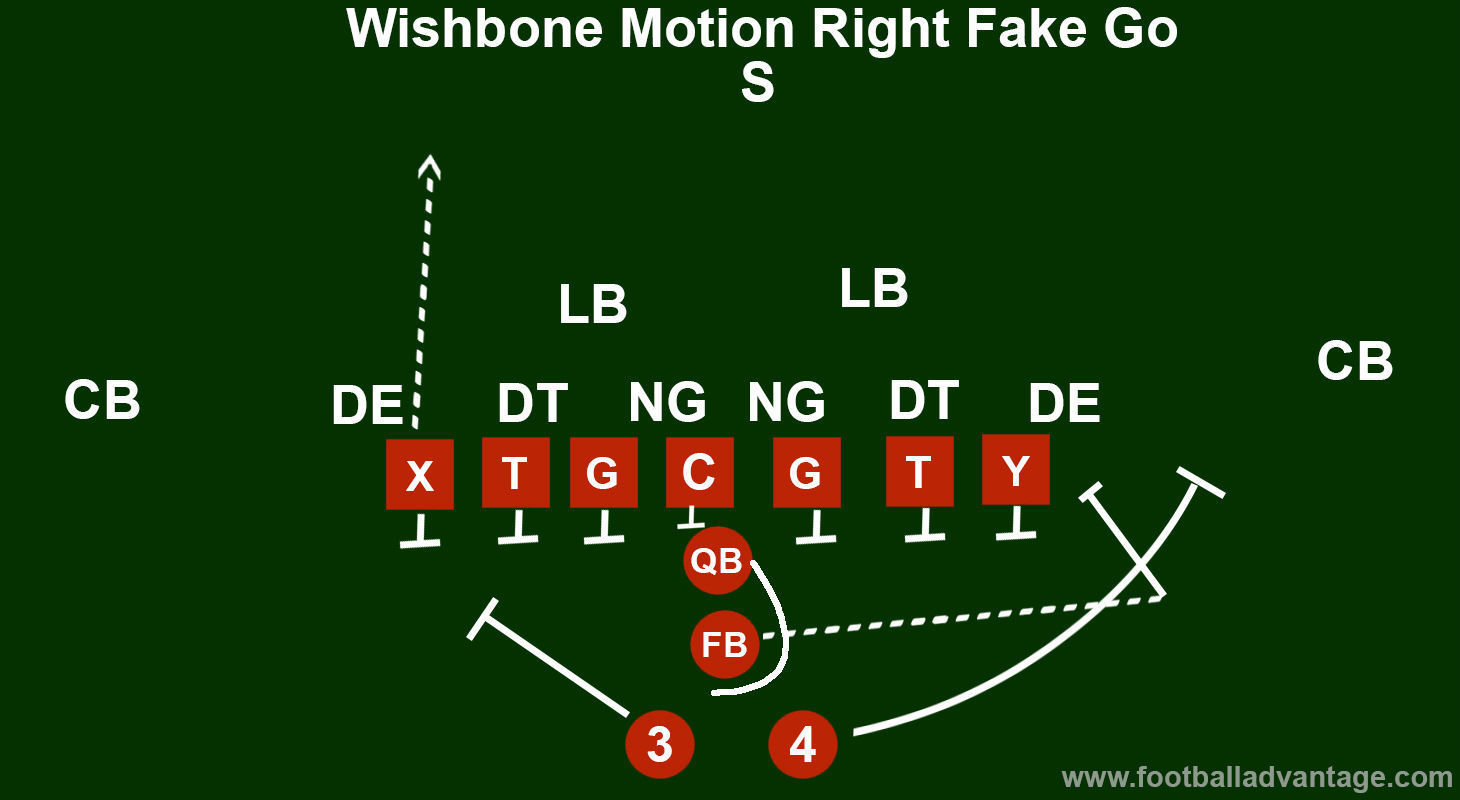 The Wishbone opens up holes in the passing game by lining up in similar formations and then making fakes to confuse the defense.

In this play, there will be motion before the snap so that the defensive personnel have to react and make changes.

This will hopefully draw more defenders to the right side of the field, away from where the passing play is designed to go.

One thing about this play is that it is really all-or-nothing.

While it is designed to gain medium-to-big yardage, there will be only one player running a route.

Therefore, if he is not open, the quarterback will be forced to bring the ball down and run most of the time.

Offensive Line: At the snap of the ball, each of the offensive linemen will take a drop step back and go into pass-blocking formation. They will take on whatever defenders come their way. Most of the time, that will mean the player who is lined up directly across from them on the line of scrimmage.

Y: The Y will be a tight end again in this formation, lined up directly to the right of the offensive tackle. At the snap, he, too, will drop back in pass-blocking coverage.

Fullback: The Fullback is the player who the Quarterback will send in motion at the snap. The idea is that the Fullback takes the motion slowly, and jogs a few steps directly to the right before the ball is snapped. He does still need to be in close enough proximity to the Quarterback at the snap, though, as he will serve as a running decoy. After the fake handoff, his job is to block a linebacker from rushing.

X: The X will line up at or near the line of scrimmage to the left of the formation. At the snap, he will fake as if he is blocking. After a second or two, he will release and run a Go Route, directly downfield. He will be the Quarterback's primary passing target.

Quarterback: After taking the snap from the Center, the Quarterback will bow out to his right and fake a handoff to the Fullback, who he sent in motion before the play started. Then, he'll peel back around to the left, looking for the X, who hopefully has created some separation between him and any defenders.

The Wishbone offense isn't as popular in collegiate and professional football today, as the passing game run out of spread offenses is run more often.

A main reason for that is all the skilled quarterbacks as well as bigger, faster wide receivers in today's game.

That being said, the Wishbone is still an excellent offense for youth football teams to run.

You just want to make sure your team has the right personnel to get it done.