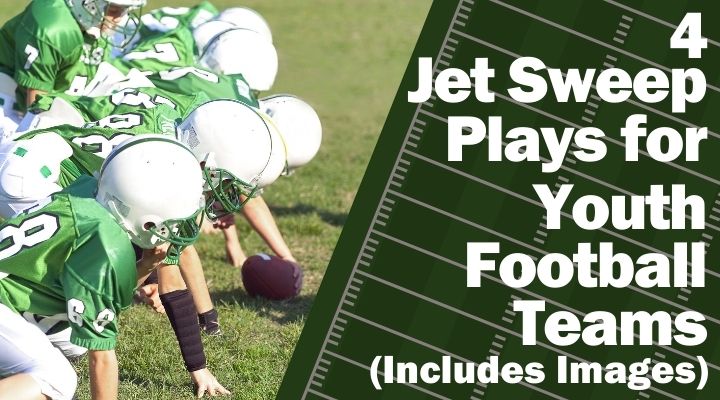 The jet sweep is one of the most versatile plays in all of youth football.

It can be run out of multiple offensive formations and have the same devastating outcome.

The jet sweep is a play designed to attack the outside of the defensive team quickly.

It'll accomplish this by either handing the ball off to a running back who’s already running near full speed from pre-snap motion or by having the quarterback keep the ball and hit the edge right away.

This play also helps a youth offense compensate if they don't have the greatest (or biggest) offensive line.

The fact that the play hits so quickly and attacks the outside eliminates the defensive linemen from the play altogether.

At the same time, this play will get the ball into the hands of your most skilled players very quickly. That’ll allow them the opportunity to run in space to avoid tacklers and find holes that can lead to big gains.

As an added benefit, if your team can master the jet sweep, then you'll be able to easily set up other football plays off of it.

For example, you can bring the back in motion pre-snap, fake the handoff to him and then run play-action passes, or counter runs to the other side of the field.

Perhaps the best part about the jet sweep, though, is that it’s an easy play to teach. This is sometimes an overlooked aspect of plays in youth football.

As younger kids are starting to learn the game, it's important to install plays that they can understand. If they’re not able to grasp how to run the play, then there's next to no chance that it’ll be successful consistently.

Let's take a more in-depth look into what the jet sweep is, the formations that it can be run out of, how to coach youth football players on it, and some example plays.

While the jet sweep can be run out of almost any formation, the main youth football alignment that it's run out of is a Double Wing.

In this formation, there’ll be at least one tight end on the line of scrimmage.

The quarterback will line up directly under center.

A running back will line up directly behind the quarterback, about 5-7 yards deep.

The final two players on the field are called Wing Backs.

They’ll line up about a yard deeper than the quarterback and on a diagonal line from the outside shoulder of the tight ends. Simple adjustments can be made to this Double Wing formation to give the offense a different look.

The quarterback can slide back into shotgun with the running back lined up about two yards to either his left or right.

The wing backs will stay in their same spots, and the wide receiver will make sure he's real wide toward the sideline.

By making a few other adjustments, you can easily run the jet sweep out of the spread formation.

The quarterback and running back will remain in the same positions as they were in the shotgun formation above.

The two wing backs will line up at the same depth as before but move much further outside the end of the line of scrimmage.

He'll line up on the line of scrimmage to the far right.

The tight end gets substituted for a Y wide receiver, and he'll line up at the line of scrimmage in between the left offensive tackle and the left wing back. On this play, all but one blocker will move their defenders to the left side of the field, while the run goes to the outside right.

The center and left tight end, tackle, and guard will all block their men to the left.

The right tackle will block the defensive tackle to the left as well.

The right guard, meanwhile, will do a mini-pull behind the right tackle to block the Sam linebacker.

This adds a little bit of confusion to the play.

The wide receiver's job is to block down on the defensive end, shielding him from the outside of the field.

The right wing back is responsible for kicking out the cornerback to the right sideline.

Before the snap, the left wing back will go in motion to the right.

The quarterback will aim to call for the snap when this player is almost right behind him.

When the quarterback receives the snap from the center, he'll turn to his left and hand the ball off immediately to the left wing back.

The ball carrier will aim to run through the hole that’s created in between the right cornerback and the defensive end/Sam.

The running back will simply run forward to the left and fake that he’s taking the handoff. This play will be run out of the first alternate formation -- the shotgun.

It’ll also integrate a little bit of trickery as well, as the quarterback will fake the handoff to the left wing back and keep the ball himself.

There’ll be no offensive linemen pulling on this play. All the linemen will simply block the defenders in front of them, shielding them off from the right side of the field.

Before the snap, the left wing back will come in motion, just as he did before.

When the quarterback takes the snap from the center, he'll quickly fake the handoff to this wing back and then keep the ball himself.

The running back will serve as the lead blocker on this play, turning upfield just outside the defensive end. His job is to pick up any defender that comes into this area.

The quarterback will aim to run through the hole that's just outside of where the lead blocker is heading. If the blocking is successful, there should be a rather big hole at just that point of attack.

The great part about this play is that the formation itself will spread out the defense -- especially the cornerbacks. In this play, the wing backs will spread out much wider than before.

There’ll be two wide receivers and no tight ends on the field. The quarterback will be in shotgun, with the running back lined up to his right.

This play will integrate a pulling guard and a crackdown block by the offensive tackle.

The left tackle, left guard, and center will all block to the left. The right tackle will block down on the defensive tackle.

The right guard will pull behind the tackle and pick up the strong safety on the right side of the field.

Meanwhile, the right wing back will crack down and pick up the Sam linebacker, while the running back picks up the right defensive end.

The X wide receiver will block the cornerback opposite him toward the sideline.

The Y wide receiver will be responsible for picking up the free safety downfield.

The offense will be leaving the cornerback on the left side of the field unblocked.

Before the snap, the left wing back will come far in motion.

The quarterback will aim to receive the shotgun snap from the center just as the wing back is approaching him.

He'll then hand the ball off quickly to this wing back, who’ll look to run upfield between where the strong safety and cornerback are lined up. Now we'll take a look at a passing play that can be built off the jet sweep.

The offense will be in a shotgun formation for this play, and it’ll be a play-action pass where the quarterback fakes a handoff before rolling to his right to throw.

All six offensive linemen (including the tight end to the left) will pass block on this play, creating a pocket.

Before the snap, the left wing back will come in motion to his right.

Again, the quarterback will aim to receive the shotgun snap when the wing back gets close to him.

When he receives the snap, he’ll fake the handoff to the left wing back.

The quarterback will then drop back on a diagonal to his right and step up to throw to one of his receivers.

After the left wing back takes the fake handoff, he'll continue and run a wheel route down the right sideline.

The wide receiver will run a deep post toward the middle of the field.

The right wing back will run a slant toward the middle of the field.

The running back will run a flat route to the right, acting as the safety valve for the quarterback in case no one else is open.

There are a few important things that you need to teach your players about the jet sweep.

First, the player who goes in motion pre-snap can't move up toward the line of scrimmage until the center snaps the ball.

He can only run side to side.

Second, the quarterback needs to work consistently on the timing of the snap with the center.

He needs to make sure he gets the ball in his hand just as the motion player is approaching him. This is easier when the quarterback is under center, but it’ll be a little tougher in shotgun.

Third, the quarterback must continue his motion after he hands the ball off.

This is an essential part of the jet sweep, as it’ll help set up counter plays, play-action passes, and QB keepers.

After handing the ball off, the quarterback has to fake as if he still has the ball and continue running to either the left or the right side of the field.

Most of the time, the best move is for the quarterback to fake that he has the ball to the opposite side of the field than where the ball carrier is heading.

This will allow your youth players to understand the basics and get them down before making any big changes. The jet sweep is one of the best plays an offensive coach can teach his youth football team.

It helps younger players take advantage of the fact that they’re often undersized, it gets the ball into your most talented players quickly, and it attacks the defense where it's weakest -- on the outside.

Most importantly, it's a play that can result in big gains without being too difficult for players to understand.

Start by installing the basic jet sweep play, and then you can install variations of it in terms of formation and plays from there.