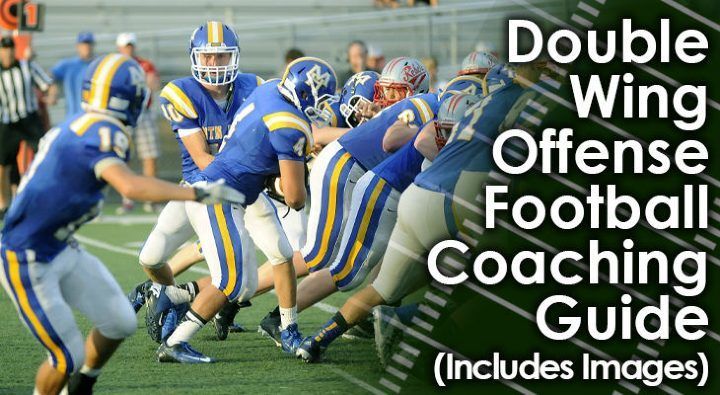 The double-wing offense is one of the more popular offensives run at the youth level of football because of its heavy run tendencies.

However, the double-wing offense can be utilized at higher levels of football in some form.

This is especially true in run-heavy, short-yardage situations, where the offense wants to grind out a few tough yards on the ground.

The offense employs two tight ends, two wing backs, a full back, and a quarterback.

The idea behind the offense is to have blockers double team as many defenders as possible to open up as many holes as possible along the line of scrimmage for ball carriers.

Just because the double-wing offense is set up as a run-first offense doesn’t mean there will be no passing, though.

In fact, because of the setup, a lot of good play-action passes can be run out of this formation.

It is very similar to the single-wing in the aspect that the formation is designed to create a lot of confusion, with misdirection run plays and play-action passes as well.

Who Should Use the Double-Wing Offense?

The double-wing offense is great for youth football teams.

It’s probably best suited for youth teams and high school teams that have a solid offensive line and a lot of players who could be good ball carriers.

It’s a very easy offense to implement, because the blocking assignments are pretty simple, and it doesn’t require the quarterback to make multiple reads downfield.

At the same time, just because it is easy to implement doesn’t mean that it’s easy for defenses to read.

Offenses that utilize this formation will run the ball most of the time, but they can also keep defenses off balance with the multiple misdirection plays and offensive linemen pulling.

The double-wing offense is most ideal for teams that lack a traditional pocket-passing quarterback.

Instead of needing to throw the ball downfield a lot, the quarterback in this offense should be quick and have the ability to run the ball.

The offense operates best when the quarterback is good on the ground as well, because that gives the offense another option for a ball carrier, and keeps the defense off balance.

That being said, the best double-wing offenses are able to incorporate play-action passes often enough to keep the defense guessing, so the quarterback needs to have a good enough arm to take advantage of that aspect of the offense. 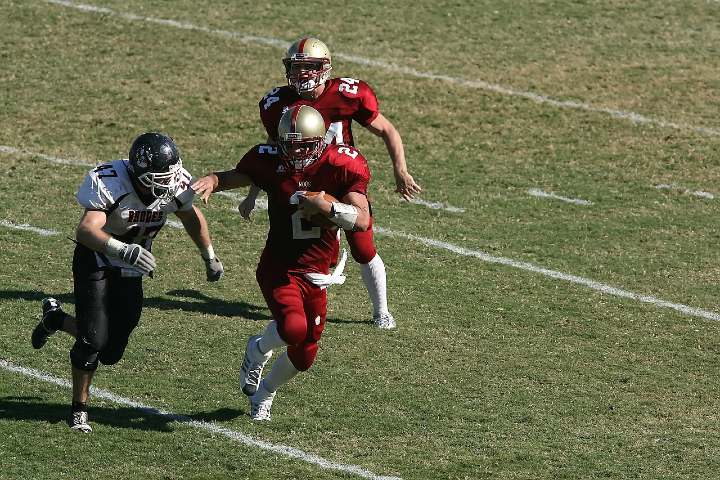 Who Should Not Use the Double-Wing Offense?

The double-wing offense is not a great fit for teams that don’t have multiple tight ends that can block, offensive linemen that are fleet of foot to be able to pull, and multiple players who can line up in the backfield to block as well as carry the ball.

The key to a double-wing offense is that versatility in the backfield.

Both wing backs and the full back need to be able to serve as lead blockers on certain plays and also as the main ball carrier on other plays.

If your team doesn’t have players who can handle those duties, then a double-wing offense might not be for you.

Similarly, a double-wing offense is not a great fit for teams that have big, tall, fast wide receivers or that have a strong-armed quarterback who isn’t that mobile.

While this offense won’t completely ignore the passing game, it certainly isn’t a main feature.

So, a team that has this make-up of personnel will be wasting it by running a double-wing offense.

How a Double-Wing Offense is Run

The double-wing offense will employ a personnel package that is different than most other base offenses you will see in the professional or collegiate ranks.

In addition to the five typical offensive linemen – a center, two guards and two tackles – a double-wing will also have two tight ends lined up at the line of scrimmage on every play.

In the backfield, the quarterback will line up under center, which makes the double-wing different than the single-wing in this regard.

Directly behind the quarterback will be what’s termed the full back.

Finally, the two other players on the field will both be called wing backs.

They will line up in the backfield split out wide of the tight end.

The double-wing offense will feature what’s called a balanced formation, meaning that the same personnel is lined up on each side of the center.

Because of this, there is no true “strong” side of the formation, at least in terms of personnel being heavy to one side or the other.

On both sides of the center will be a guard, tackle and tight end.

In the backfield, there will be a wing back on each side of the center.

The wing backs will line up on a diagonal from the tight end, with their inside foot lining up almost exactly behind the tight end’s outside foot.

As mentioned, the quarterback will line up directly under center and not in a shotgun formation.

He will take the snap directly from the center and then turn to hand the ball off (or fake the hand off) to either wing back or the full back, who will be lined up directly behind him, about five yards back.

The double-wing offense will run a lot of different plays, but the three main ones are a power run, a counter run, and a power passing play.

We’ll break them all down for you here so that you can get a better idea of exactly how the double-wing offense can be deployed. 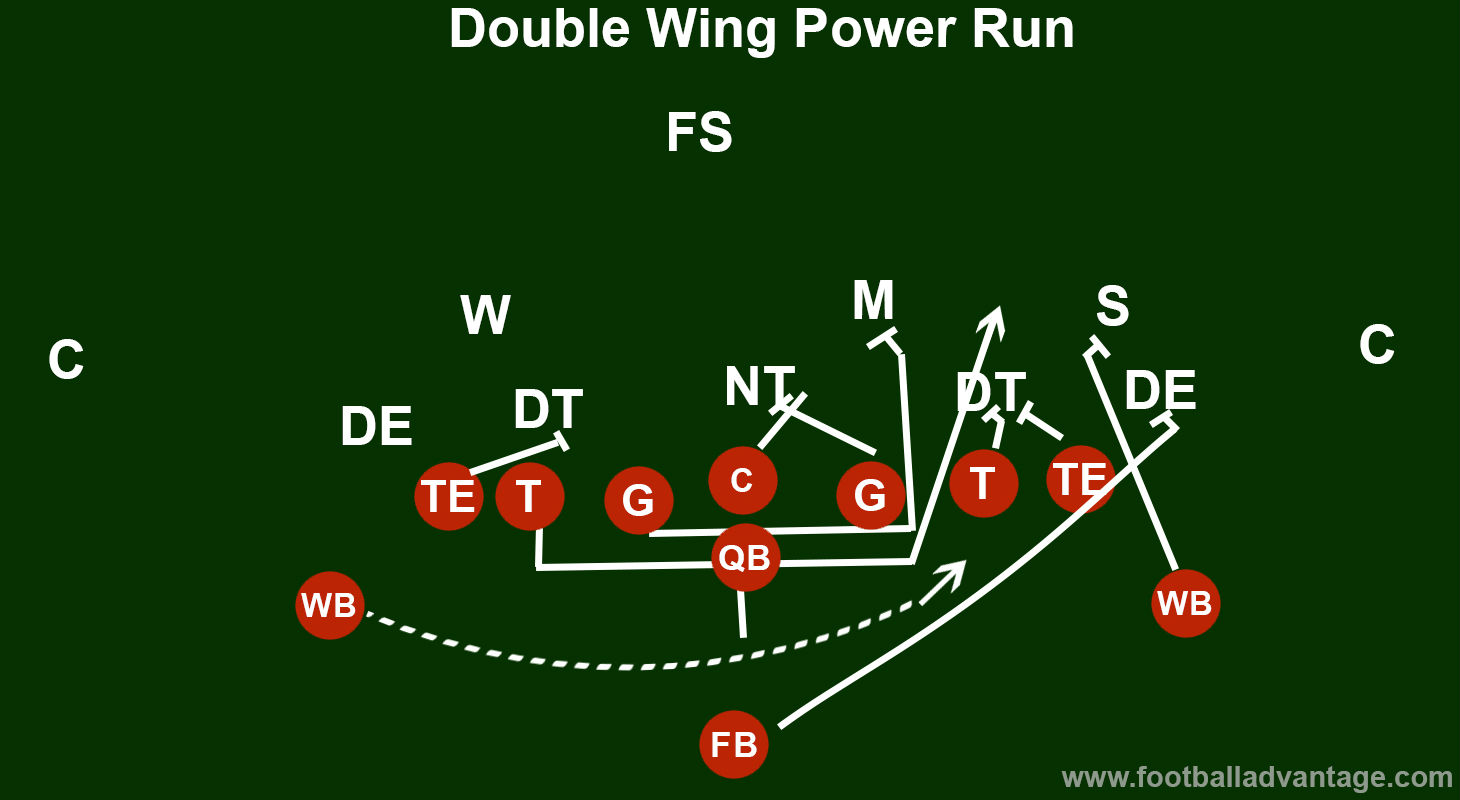 The power run play out of the double-wing is designed to run the ball almost straight ahead with either one of your wing backs or the full back.

It is a straight-ahead run play, but it will cause confusion for the defense by switching the side of the field it is run to, and also pulling offensive linemen from one side to the next to keep the defense off balance.

The power run play will overload one side of the field with a lot of lead blockers.

The ball carrier’s job is to run straight ahead through the designated hole on the side of the field where the blocking is, but he also must be patient and let the hole develop.

For the purposes of this discussion, our offense will be running the ball to the right side of the field.

On this play, the tight end on the left side of the center will block the defensive tackle, shielding him from the inside of the field.

The offensive tackle and guard on the left side will pull from their positions to the right side of the center.

The first step for each of these players will be down the line instead of forward, and they will curl behind the center before turning up field.

The four other offensive linemen will all block down on players in front of them.

Their responsibility is to block the outside shoulder of these players and push them to the left side of the field, opening up the hole for the pulling offensive linemen and ball carriers behind them.

The wing back on the right side of the field will be responsible for getting upfield and blocking the free linebacker on that side, which in this case will most likely be the Sam (or strong-side) linebacker.

The offense will have three options for the ball carrier on this play.

In most cases, it will be either the wing back on the left side of the field or the full back.

For our purposes, the wing back will be the ball carrier, and the full back will have blocking responsibilities for the defensive end on the right side of the field.

The third option for a ball carrier would be the quarterback himself, and in this case, the wing back would also serve as a lead blocker. 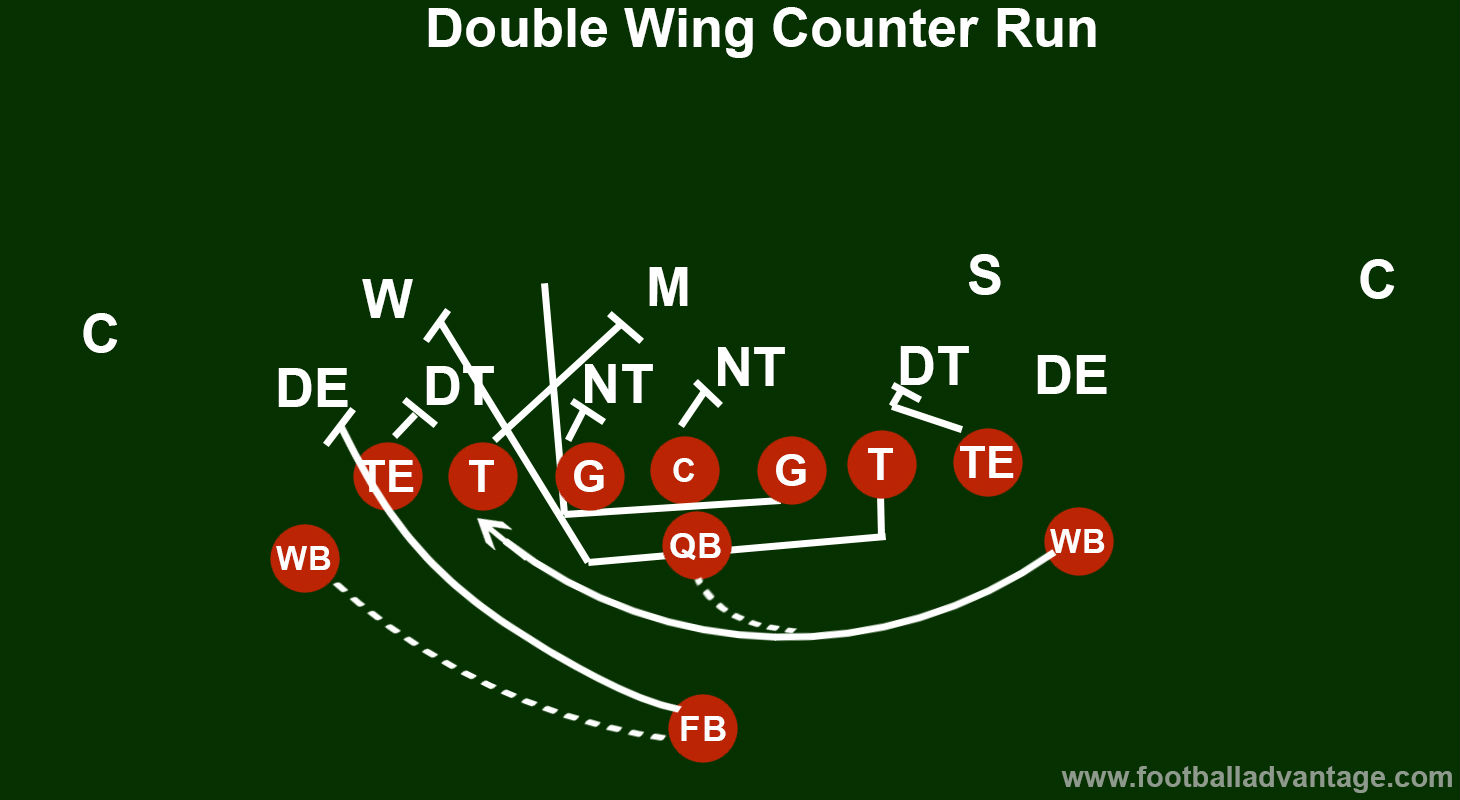 The counter run is a misdirection run play created to cause confusion for the defense.

The idea is to fake the run to one direction and run the ball instead to the other direction.

In this case, the blocking responsibilities will basically just be switched to the other side of the field from how the power run was designed.

The center and guard, offensive tackle and tight end on the left side will be responsible for blocking the players in front of them toward the right side of the field.

In the backfield, the wing back on the left side will run toward the quarterback as if he were going to take the hand off.

The quarterback will fake the handoff to him, and then will either hand the ball off to the full back or other wing back instead.

The ball carrier will run toward the blocking on the left side of the field, waiting for the hole to open up with the lead blockers. 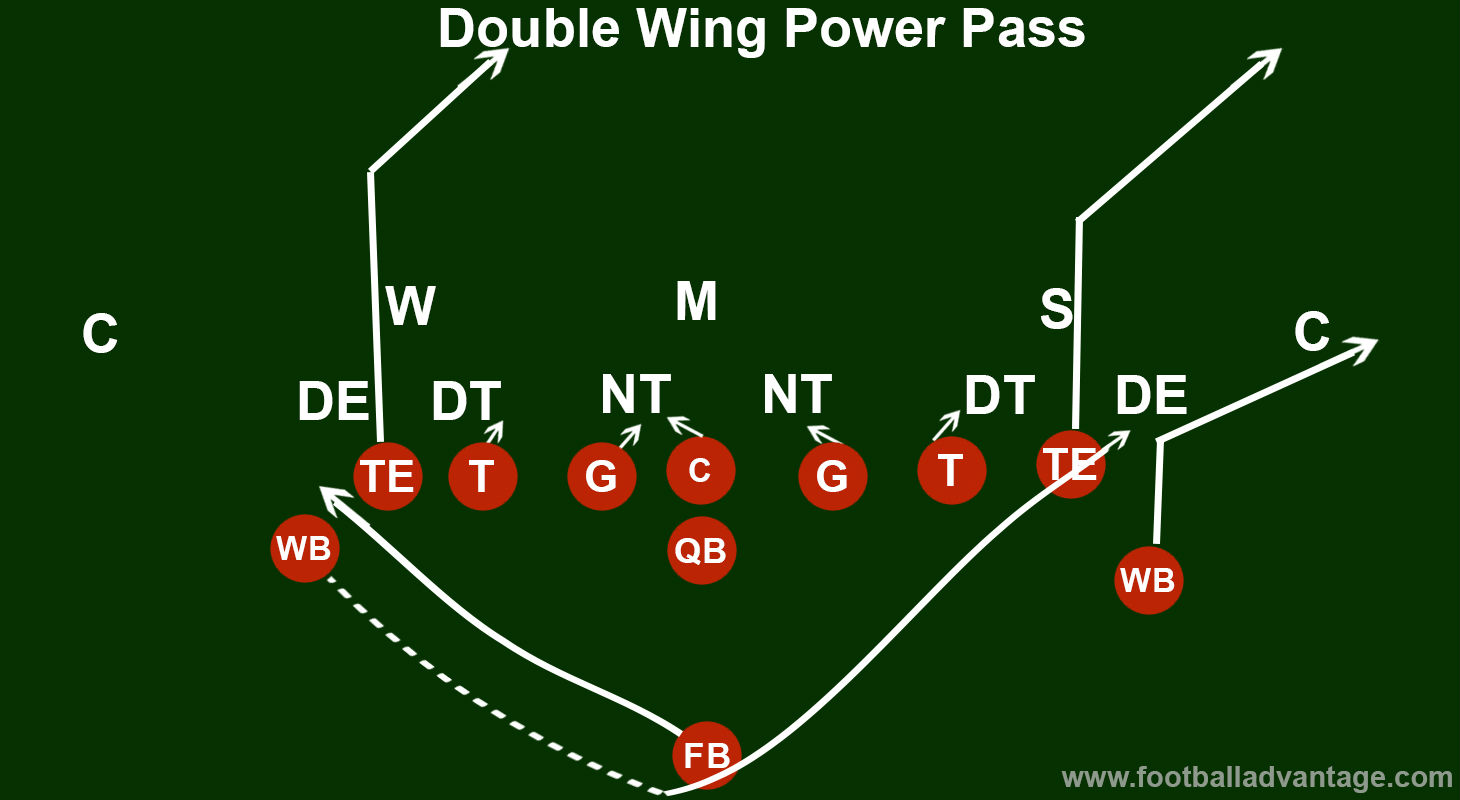 The power passing play can be run with or without misdirection, but most of the time, there is some form of deception involved.

The available passing targets running routes on this play will be both tight ends and one of the wing backs.

The five offensive linemen will be responsible for pass protection of players who are right in front of them.

This will allow for some double-team options, as there should be more blockers than pass rushers.

The wing back on the left side of the field may start the play in motion toward the quarterback, and at the snap of the ball, he would be responsible for getting toward the line of scrimmage at the tight end’s lined up position, blocking what will most often be the rushing defensive end.

The full back will do the same to the left side of the field, picking up any rushers from the outside.

The tight ends almost always run post or stop patterns on this play, and both will go toward one side of the field or the other.

The wing back will run an out pattern to the same side of the field as well.

The idea here is to overload the three available receiving options to one side of the field so that the offense can isolate only a few defenders in coverage.

The double-wing offense isn’t the best fit for all personnel groupings.

Because of its design, most teams at the professional and collegiate levels don’t use it at all.

When they do employ their “big” offensive formations, they might use something similar to a double-wing, but without the traditional wing backs – instead using wide receivers spread further out to isolate some defenders from being able to stop the run.

Still, the double-wing offense is a great formation for youth football teams and for those teams that have players with the skill sets that lend more toward running the football in a power style.

The quarterback in this system could also be effective at running the football as well, as that would add another element of attack to keep defenses guessing on every play.

The double-wing offense is a great formation to teach players who are just starting out the game, and it’s also great to implement in some more complicated fashions for teams at more advanced levels as they get bigger, faster, and stronger.

[…] only do youth teams run the ball more, but they use more classic offensive formations such as the Double Wing where fullbacks are asked to not only block but also tote the ball a lot, […]

[…] While the jet sweep can be run out of almost any formation, the main youth football alignment that it's run out of is a Double Wing. […]

[…] Double Wing is one of the oldest formations in […]