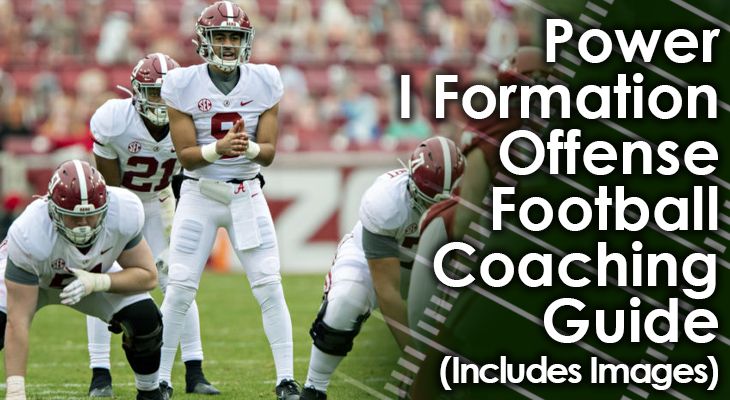 Most youth football teams run the ball way more than they pass.

Because of this, they implement offensive formations that are heavy on blockers and runners in the backfield, subbing out wide receivers for these players.

The Power I Formation is one of the formations that does just this.

It's a slight variation on the traditional I Formation, in that it adds an H-Back to the backfield and puts two (2) tight ends on the line of scrimmage.

Because of this, the Power I Formation will typically have no traditional wide receivers on the field.

While it is a run-heavy formation, the Power I Formation can also set teams up for some impactful passing plays -- especially in the play-action game.

This is why some offenses at higher levels (including the professional level) run it on some short-yardage situations.

Let's take an in-depth look at the Power I Formation, including the personnel involved and some example plays.

Who Should Use the "Power I" Offense?

1. Offenses that run a lot

Teams that have a great stable of run blockers, including tight ends and backs, will be a great fit for the Power I.

The formation is set up to create great holes in the running game, and deception, too.

2. Offenses that have multiple ball carriers

The real key to a successful offense in the Power I is having multiple players who are capable of carrying the ball.

Switching carriers (from Fullback and H-Back for example) helps keep defenses off balance.

3. Offenses that can run play-action:

Another key to a successful offense out of the Power I is running the play-action pass a lot.

This will take some deception on the part of all players, and some good pass-catching players -- especially the tight ends and H-Back. 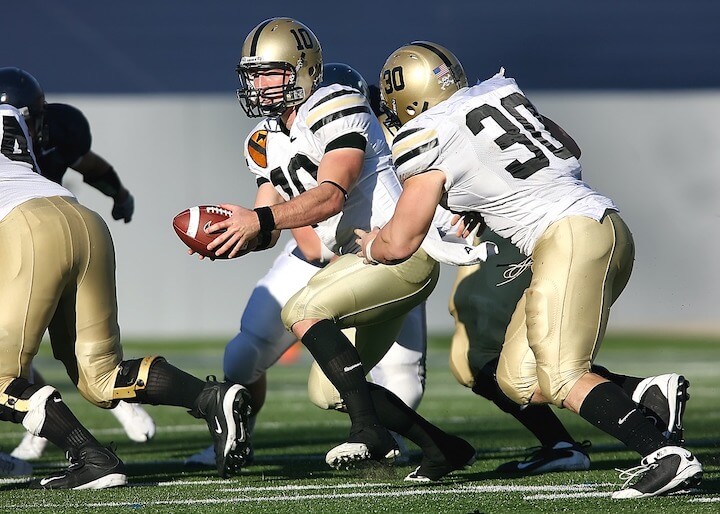 Who Should Not Use the "Power I" Offense?

1. Offenses with lots of wide receivers

Teams that have a number of very skilled wide receivers are probably not a good fit for the Power I.

This is because wide receivers will stick on the sideline for many plays run out of this offensive formation.

2. Offenses that are smaller

While not a requirement, it's a good thing if your players are physically bigger.

The extra size and muscle will help in run blocking, which is essential for this formation.

3. Offenses that throw a lot

Offenses that run the Power I Formation will certainly throw the ball a good amount.

But, if your offensive team is best suited for a pass-heavy playbook, then you might want to look toward a different base formation to use.

The base personnel will almost always be the same on every play run out of this offensive formation.

Because of this, offenses are able to mask when it calls a run versus a pass.

It's also great for causing confusion about which player in the backfield will take a handoff (or toss) on running plays.

Below is a general guide for the base personnel in the Power I Formation.

Some coaches will run slight variations by splitting one of the tight ends out wide, or having the H-Back and/or Fullback move around to different starting positions in the backfield.

Here is the more traditional personnel in a Power I offense:

The I Formation is named as such because the two players in the backfield (Fullback and Running Back) are lined up directly behind the quarterback, forming what looks like a letter "I" in the backfield.

The Power I is a change to this, adding in a H-Back and subbing out wide receivers for two tight ends at the line of scrimmage.

It then becomes the Power I as these are more "powerful" players who block and hit well, rather than faster skill-position players.

The standard formation for all Power I plays are:

The best way to understand how the Power I offense works is to take a look at two (2) specific plays -- a running play and a passing play.

To highlight the deception that the Power I offense looks to create, let's take a look at two (2) plays that start out from the same basic formation. 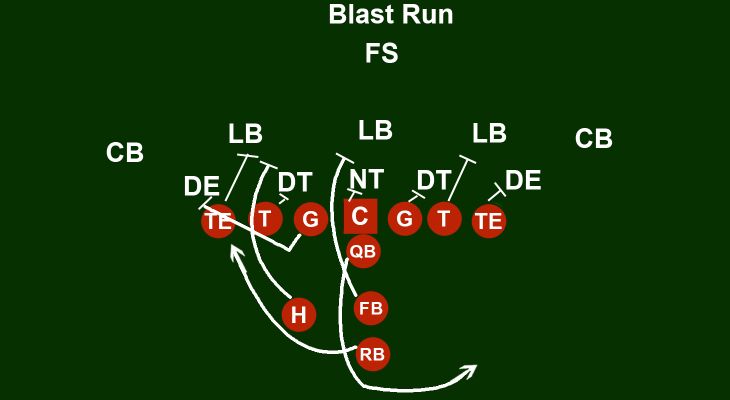 The Blast Run play is the most basic of all run plays out of the Power I Formation.

It uses all of the strengths of the formation by loading up extra blockers to one side of the field. It also utilizes a quick pull from one guard to cause some confusion along the line of scrimmage.

Every offensive lineman will block their man to the right side of the field (since this play will be going to the left in this example).

The only exception is the left guard, who will pull behind both the left offensive tackle and left tight end to kick out the defensive end.

The Fullback's job is very important.

They must burst through the A gap to the left and pick up the Mike linebacker.

Their job here is to seal the Mike off from the left side of the field.

H-Backs will serve as the lead blocker on this play.

They'll head through the C Gap, just to the left of the offensive tackle.

It is their job to block the first defender that comes in front of them.

Quarterbacks will take the snap from the Center and loop back to their left.

They'll hand the ball off to the Running Back.

It's important to continue through the play after the handoff and loop back to the right, acting as if they still have the ball.

Doing so will help set up potential play-action passes in the future.

The Running Back (RB) will serve as the ball carrier on this play.

They'll take the handoff from the Quarterback and then follow the H-Back upfield.

Ideally, the RB will run through the C Gap to the left, finding whatever daylight opened up by the blockers in front. 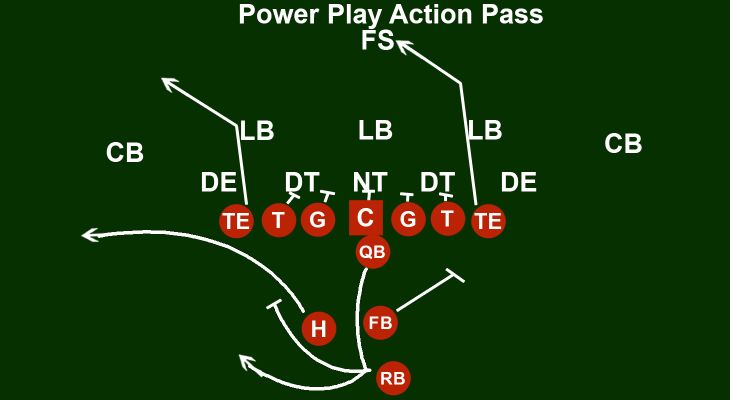 In this passing play, we'll see how a great run game with the Power I Formation sets up what could be a devastating passing game.

This play will include the Quarterback faking the handoff to the Running Back, and then rolling out to their left to complete a pass.

The QB's primary target on this play is the right Tight End. They can also look to the left Tight End and finally to the H-Back for a drop-off.

The offensive line will quickly explode out of their stances and make it look like they're going to run block.

Before they get too far downfield, they will pop back up and pass block.

Both Tight Ends will start by making it look like they're run blocking.

After a few seconds, they'll release out of this and run their passing routes.

Both will run Post routes to the left side of the field, with the right Tight End running a deeper route.

The Fullback will fake as if they were going to run block straight forward.

They will then curl off to the right side of the field and serve as a blocker.

It is their job to pick up any defender that gets into the backfield on the outside right.

The H-Back will pretend to run block to the left.

After a few seconds, they'll release off of that and run a Flat route to the left side of the field.

The H-Back will serve as the safety valve for the Quarterback, if neither Tight End gets open.

After the snap, the Quarterback will open to the left side and fake a handoff to the Running Back.

They will then curl out toward the left side of the field, stop and square their shoulders to get into throwing position.

Again, the QB's first target is the deep Tight End, followed by the shallow Tight End and then the H-Back.

The RB will fake taking a handoff from the QB before peeling off to the left and serve as a blocker in front of the QB.

Like the Fullback on the other side, the Running Back is responsible for picking up any defender who breaks into the backfield on the left side of the field toward the outside.

The Power I Formation is a great run-heavy formation used by a lot of youth football offenses.

But, it's not all about running plays as it can also help set up what can be a devastating play-action passing game.

Because of all the options and misdirection plays brought about by the Power I, even professional team can use it especially in specific situations.

Role of an Offensive Coordinator in Football (Duties)