What is a Hitch Route in Football? (Full Explanation) 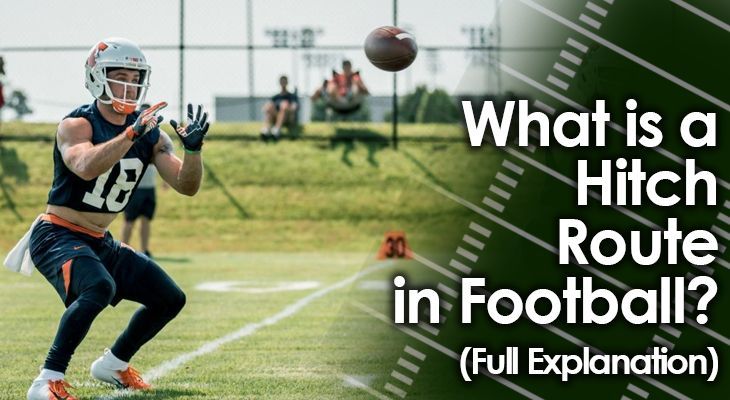 The Hitch route is one of the more versatile passing routes in football.

It's a route that can be rather simple, or can be used as more of a combination route.

The Hitch isn't one of the nine routes on the Route Tree.

This means that it's slightly more complicated to teach and run than the basic passing routes in football.

That being said, you can certainly teach and install a simplified version of the Hitch route to all your receivers without much of a problem.

The more complicated version of the Hitch route, the combo one, will take a little bit more practice.

You might want to hold off on teaching this version until your receivers are a little more advanced.

Let's take an in-depth look at what the Hitch route is, why it's called that and how to run it.

The Design of a Hitch Route The Hitch is a short passing route.

In most cases, it will only be run about five yards downfield.

As such, it's obviously meant to gain a few yards when the offense needs to move the ball.

The Hitch route is also a quick-hitting route. It won't take long for the receiver to run it from start to finish.

In order for it to be successful, the quarterback will have to throw the ball to the receiver quickly. If he doesn't, then a defender is likely going to be able to cover the receiver without a problem.

In both versions of the Hitch route, the receiver will run full speed downfield and then stop dead in his tracks.

The idea behind the route is to get the defender running one way and then make it hard for him to stop his momentum when the receiver stops suddenly.

If it works, the receiver should be wide open for a short period of time.

Because of the design of the route, offenses will often use the Hitch route to advance the ball on third-and-short yardage situations.

If they only need to gain two yards for a first down but are having trouble running the ball, then an offense may have one receiver run a hitch route for an easy and short completion.

Receivers who run solid, crisp routes and are sure-handed are the best ones to run a Hitch route.

Their job when running this route is to simply get open quickly and secure the catch.

They aren't asked to gain many yards after the catch at all. If they do, that's great, but if not, that's OK, too. How to Run the Hitch Route

Let's start with the simpler form of the Hitch route.

In this version, the receiver will run straight forward and then stop when he gets a few yards downfield.

At the snap of the ball, the receiver will run full speed straight ahead. His goal is to make the defender think he's running a deep Go route.

When the receiver gets about five to seven yards downfield, he'll stop quickly, then immediately turn back toward the line of scrimmage.

Since he'll be moving back toward the line of scrimmage, he'll need to actually be slightly deeper when he stops than where the route ends.

The receiver will have three options here.

He can turn straight back, or slant slightly back to the left or the right.

Angling to one side or the other could help him gain some extra separation from the defender.

It's important, though, that the receiver is on the same page with the quarterback on this.

If the receiver angles to the right but the quarterback thinks he's going to the left, it could result in an incompletion or an interception.

The second version of the Hitch route is a combo with the Slant route.

In this more complicated version, the receiver will start by running a quick Slant route, and then break it off to stop in his tracks.

At the snap, the receiver will take one quick step forward, then use his outside foot to plant, pivot and angle toward the middle of the field.

He'll take a roughly 45-degree angle as he runs full speed across the middle of the field.

When he gets to the designated spot on the field, he'll break off the Slant route and Hitch -- just as he would do in the simplified version.

In this case, he'll want to either angle straight back toward the line of scrimmage, or in the opposite direction of where the Slant was going.

For example, if he's running the Slant from left to right, then he could either angle straight back or to the left slightly when he runs the Hitch.

This would give some extra spacing between the receiver and the defender -- since the defender's momentum will be going the opposite way to follow the Slant.

The Hitch is one of the most effective short-yardage passing routes in football.

While it's not technically one of the nine routes on the Route Tree, it's still a very simple route to teach youth football players.

Offensive coaches can install the Hitch route in situations where they need to gain a few yards to gain a first down or even score a touchdown.

It's a great route to take advantage of the defender's body momentum, and gain some quick separation for the receiver.

The Hitch route can also be used in combination with the Slant route for a slightly more complicated pattern.

This version should only be taught to receivers who have mastered the basic routes, and who you're confident can handle the additional task.