How to Execute a Handoff Correctly in Football (4 Tips)  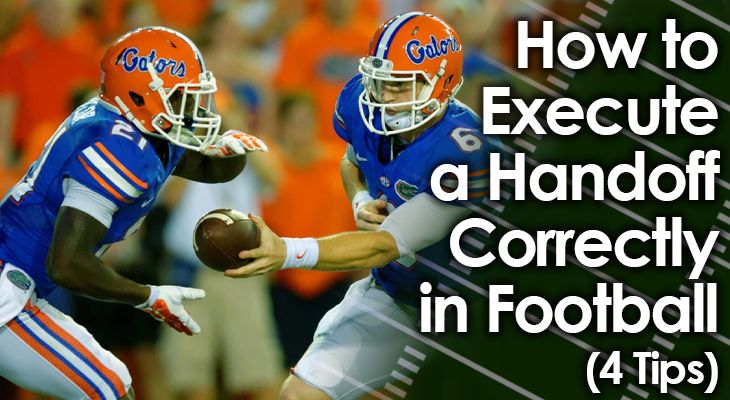 The exchange between a quarterback and running back is one of the simplest, most straightforward things in football.

On just about every running play, the quarterback will need to execute a handoff with a running back.

While this may seem very simple, there is a "correct way" to execute a handoff.

If the quarterback and running back are the least bit off with their handoff mechanics, a lot can go wrong.

In fact, a botched handoff can be one of the most disastrous things for an offense in football.

So, the handoff is a skill that both players need to learn and practice over and over again.

After lots of practice and getting used to it, handoffs will become routine for both the quarterback and running back.

Here are 4 tips on how to execute a handoff correctly.

4 Tips for a Perfect Handoff

1. Running Back Sets the Pocket

There are two components to a successful handoff:

We'll start with the running back's end of it.

Top of the Pocket

For the top half, the running back should keep his inside elbow even with his shoulders.

The forearm should be horizontal with the field -- meaning it should be straight across from elbow to hand, left to right.

On his inside hand, he should face his palm down and be ready to eventually accept the handoff from the quarterback.

Bottom of the Pocket

For the bottom half, the running back should put his outside elbow straight down from his shoulder. He should keep his forearm also horizontal across his midsection.

His outside hand should be slightly bent, and the palm should face up. This hand needs to be ready to accept the other end of the football from the quarterback.

The fingers on this hand should point out, toward the quarterback.

2. Running Back Accepts the Ball

Once they set the pocket right, all that's left is to actually receive it.

To do this, the running back will run toward the point of attack.

They should have their eyes focused forward, toward the hole in the designed play. Doing so allows them to see the running room as it develops based on the blocking scheme and the actions of the defenders.

As he's approaching the quarterback, the running back needs to keep the pocket set at a stable form, without altering it -- closing or opening it too much, in other words.

The quarterback will be placing the ball into the pocket.

The running back needs to receive it softly, just as he would a pass.

Once the ball goes into the pocket, the running back needs to secure it immediately. Grip it at both ends and hold it tightly to avoid a possible fumble. 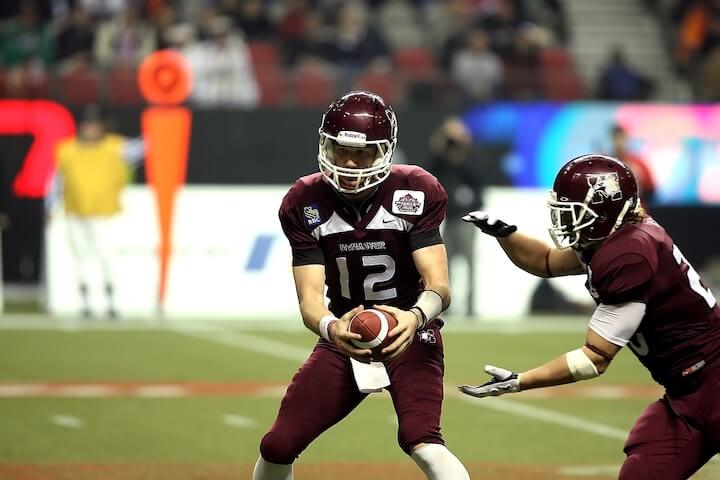 Whether it be from under center or out of the shotgun, quarterbacks have to first secure the snap before doing anything else.

The next step for quarterbacks is to approach the spot where the handoff will take place.

As they backpedal to get to that point -- or moves laterally if they're in a shotgun formation -- they should be holding the football in both hands to make sure they have a firm, secure grip.

There are 2 reasons why quarterbacks need to handle the ball with both hands:

The first is ball security.

Holding the ball with only one hand while running is always a no-no, for all positions.

The second reason is it could give away the play.

If the defense sees the quarterback dropping back and only holding the ball with one hand too early, it'll be a giveaway that it's a running play.

4. Quarterback Hands It Off

As the quarterback gets closer to the point of the handoff, he'll extend both his arm and his hand away from his own stomach.

He should be using his top hand to hold the football at this point. If he opens to his left, his right hand will be on top, and vice versa.

He should extend the arm toward the running back.

The running back will then be approaching the quarterback, and if their timing is right, they'll meet perfectly.

At this point, the quarterback needs to place the ball softly yet securely in the running back's midsection.

It's good practice for the quarterback to target the running back's far hip when placing the ball.

They likely won't get this precise every time, but it helps the quarterback understand exactly where they need to place the ball.

Proper placement is a huge key in avoiding a fumble.

The exchange between the quarterback and running back is one of the most basic plays in all of football.

This handoff will start almost every running play, so it's essential that both players get it down pat.

Even a little mishap in a handoff can lead to a disastrous fumble for the offense.

So, teach it to your players early, and make sure they practice it over and over again.