What is a Wheel Route in Football? (Full Explanation) 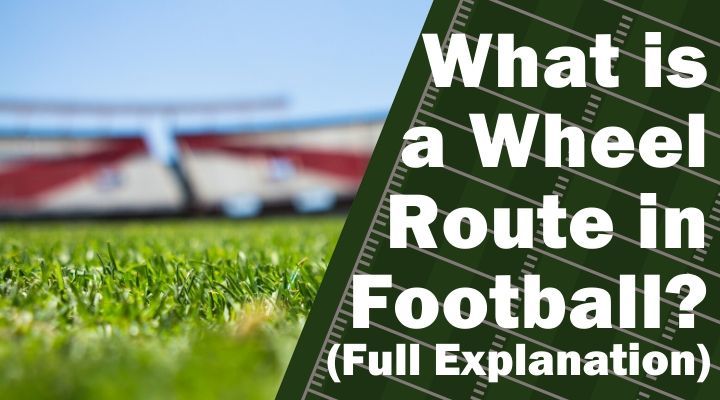 The wheel route in football is one of the simplest, yet most devastating passing routes.

It's a route that’s most often designed for running backs, although wide receivers can sometimes run it as well.

At its core, the wheel route is designed to take advantage of slower defenders matched up against speedier route runners.

The route forces the defender to move quickly laterally, and then quickly turn around and start running upfield in hopes of covering the receiver.

It's a great route to teach football players of any age because it’s so easy to learn and can be run from pretty much any area of the field.

Let's take an in-depth look at what the wheel route is, why it's called that, and how to run it. The Design of a Wheel Route

The wheel route is designed to deceive the defender into thinking the receiver is running one route, when in fact he's running another.

In a way, it can be considered a combination route, since it's a mash-up of two different routes into one.

It's called a wheel route because the point at which the receiver turns the route from a "Flat" to a "Go" is similar to turning the corner and making a rounded pattern like the outside of a wheel.

The wheel route is most commonly designed for running backs.

The back will start by running a route to the flat and will look back toward the quarterback when he gets near the sideline.

This will hopefully make the defender believe that the ball is going to be thrown as a safer dump-off, behind or near the line of scrimmage.

At this point, when hopefully the defender bites on the fake, the back will turn the corner and run a "Go" route straight down the field.

If he's able to break free from the defender, he should have plenty of daylight to run, and a big passing play with huge yardage could ensue.

The wheel route is very difficult to defend even if the opposing team is running a zone defense.

Players tend to try to jump on routes to stop completed passes from even occurring. That's what this route tries to take advantage of.

When a defender sees the running back look back toward the quarterback, his first instinct is to approach the running back quickly so that he can either break up the pass or at least make a tackle before a lot of yards are gained.

This takes the defender's momentum toward the backfield, and it's very difficult for him to adjust that quick enough to recover and catch back up with the running back.

How to Run the Wheel Route

It's very easy to teach a wheel route, no matter what level of player you're coaching.

The easiest way to teach it is to use a running back as an example.

While a wide receiver can run a version of the route, it's slightly more complicated because there's less room on the field for him to work with.

In a basic offensive formation, the quarterback will line up under center, with two wide receivers split out wide - one on either side of the quarterback.

There will be one tight end at the line of scrimmage and two running backs in the backfield, each about five yards behind the quarterback and spread out behind the offensive tackle on their side of the field.

At the snap of the ball, the running back will run a curved route toward the sideline.

This is called a Flat route, and it's designed to serve as a safety net route for the quarterback, in case his primary targets - his wide receivers and then tight end - aren't open.

Once the running back gets a few yards from the sideline, he’ll look back toward the quarterback as if he were going to receiver a pass from him on this Flat route.

This is when the defender will likely try to pounce on this route.

At this point, the running back will turn that corner (the rounded outside of the wheel) and turn his route directly upfield. This is the Go part of the route.

The running back will head straight downfield toward the other endzone, looking back to the quarterback once he makes his way into open space on the field.

While this is all going on, the quarterback will be doing a few things.

(1) First, he'll be scanning the field and looking at his other receivers to see whether the defense is running man-to-man or zone coverage.

(2) Next, he'll look toward the running back in the Flat route to throw the defender off.

(3)At this point, he may decide to do a hard pump fake to the running back to confuse the defender even more. This isn’t something that he has to do, though.

(4) Finally, he'll look for that same running back on the Go route down the field for a big play.

The running back will be running a "free release" pattern on this play. This means that no matter what, he’ll be running his full route.

He won't decide to stay in and block if an outside defensive lineman breaks free early, and he won't break off his route early either.

The key to the play being successful is the back running the full wheel route. The wheel route is one of the most effective routes in football.

It's a combination route, as the player running it will start off with a Flat route only to finish with a Go route.

It's also a very deceptive route because it fakes the defender into thinking the pass will come short only to have it go deep downfield.

The great part about the wheel route is that it’s very easy to teach. This makes it one of the most effective "fake-out" routes that you can teach youth football players.