What is a Sam Linebacker in Football? (Full Explanation)  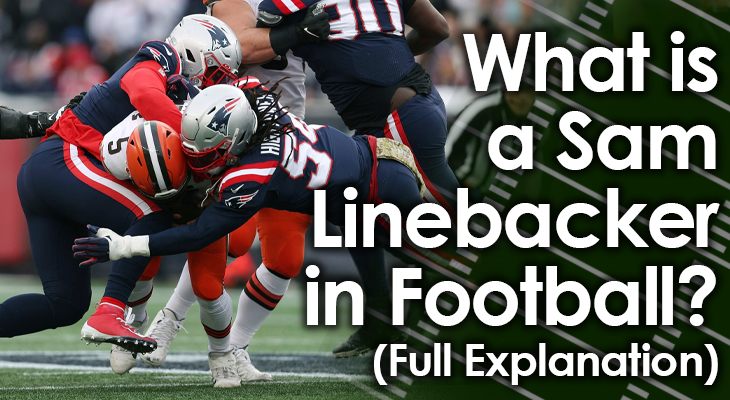 The "Sam" linebacker is one of the 3 traditional linebackers in a football defense.

(The other linebacker nicknames are the "Mike" and the "Will")

This is the linebacker position that will line up on the strong side of the offense.

As we'll describe in more detail below, the Sam will usually line up based on where the tight end is or on some other traits of the offense.

This can all vary from one defense to the next, of course, especially when dealing with different base defensive formations.

Let's take a more in-depth look into what the Sam linebacker is in football.

What is a Sam Linebacker?

As said above, the Sam linebacker is one of the three traditional linebackers.

Football coaches named it "Sam" to make it easier to refer to the player's position, where he lines up, and his general responsibilities.

The player in this position requires a diverse skillset to be successful with their specific roles and responsibilities on defense.

Where the Sam Lines Up

The Sam will line up on the strong side of the offensive formation.

Here's how to figure that out...

If there is one tight end on the field, then the strong side will be wherever the tight end lines up.

If the offense plays two tight ends, then the strong side will depend on where the fullback is shaded.

There are times, though, when each side of the field is symmetrical...

When this happens, the strong side will typically be the right side of the formation due to the offensive tackles.

So, once the offense sets their formation, the Sam linebacker will know which side of the field to line up on.

In a base 4-3 defensive formation, the Sam will often line up anywhere from right up on the line of scrimmage to about five yards off it.

In a 3-4 defensive system, the Sam linebacker will often line up a little deeper.

This is because the outside linebackers will be closer to the line of scrimmage. 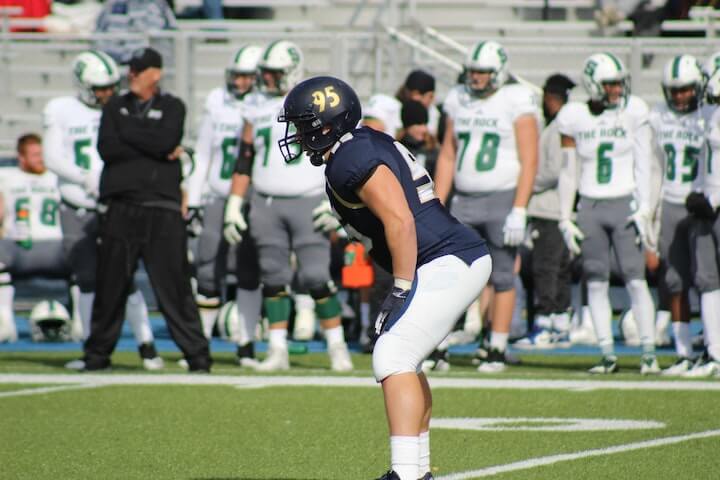 The Sam's Role on Defense

The Sam linebacker is what's generally known as the most balanced of all the linebacker positions. This means they're considered equally good at both pass coverage and run coverage.

That's good, too, since teams will ask them to do both equally.

(Especially in the 4-3 defensive scheme.)

On the other hand, in the 3-4, they may play a bigger role in run coverage than they do against the pass -- unless it's in zone coverage.

In zone coverage against the pass, he'll drop into short zones and not too far back to the deep zone as he'll be responsible for the mid-range passing routes.

In man-to-man pass coverage, he'll often match up against tight ends or the second or third receiver in the formation.

Against the run, the Sam will have a gap assignment in most cases, and will be responsible for jamming up that gap no matter what.

If he reads that it's a run, he'll fill his assigned gap.

It's very important that he doesn't waste any steps while doing so to avoid falling a step behind the ball carrier or the blockers in front of him.

He'll need to move in a "downfield" direction while he does this, always approaching the line of scrimmage once he recognizes that the play is a run.

Most of the time, the Sam will have run gap responsibilities to the cutback A gap.

This means that he'll look inside first and also pay attention to the ball carrier potentially cutting back to an outside gap.

If the Sam reads that the play will be a pass, then he'll need to shift to his pass coverage responsibilities on that play.

If it's zone coverage, he needs to quickly drop back into his zone while keeping his head up and his eyes always toward the quarterback to see where he's looking.

In man-to-man coverage, the Sam needs to quickly pick up the player on offense that he's responsible for covering. 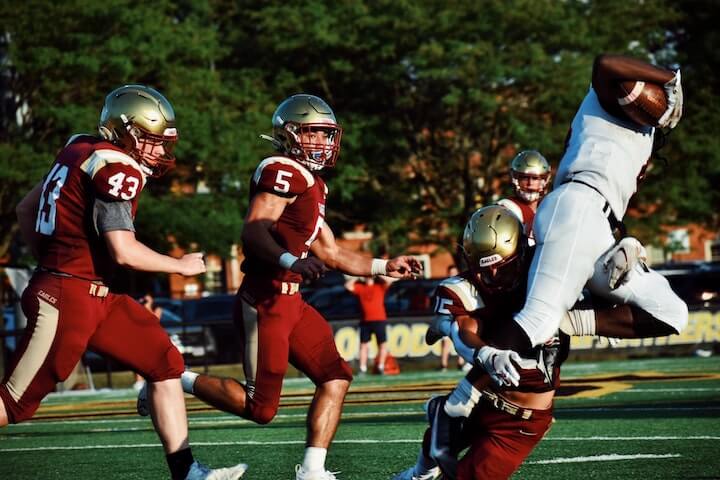 What Traits the "Sam" Needs

The Sam linebacker needs to have a lot of traits that a strong safety does.

In many ways, the two positions will be responsible for many of the same things.

They could even end up lining up in similar positions of the field, too -- depending on the specific defensive formation and team.

Because of this, the Sam needs to have good size, speed, strength, and quickness.

Like all linebackers, he needs to have great vision too.

He needs to study the game well and be able to quickly identify pass and run plays so that he's never a step behind.

He needs to have good coverage skills in both man-to-man and zone schemes, and needs to be a sure tackler -- almost more than anything.

Above all, though, he needs to be able to quickly change direction and explode as he moves from side to side, back to front and front to back.

The Sam linebacker position is the linebacker that aligns himself toward the strong side of the offensive formation on all plays.

He's generally considered the most balanced of the traditional linebacker positions -- having equal responsibilities against the pass and the run.

In many ways, the Sam linebacker and the strong safety will be very similar in responsibility, role and (as a result) traits.

The position is one of the most important on the defense, so it's essential to have a talented Sam linebacker.