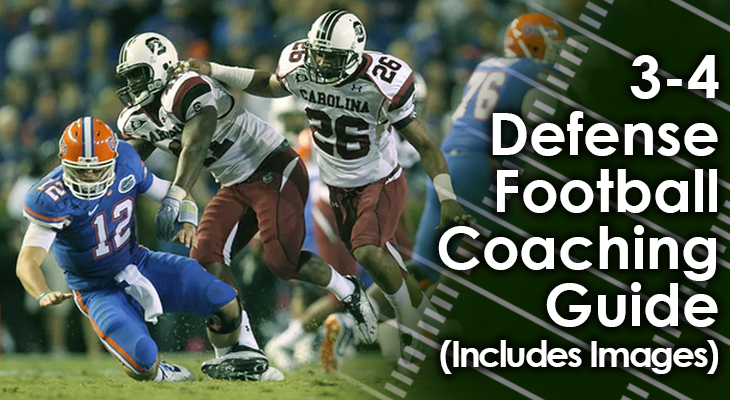 There was a time in football where defenses would run a “base” formation on most plays, with wrinkles on the base system mostly performed in the secondary.

Almost all defenses would have a base formation that included either:

a. Four down linemen and three linebackers.

b. Five down linemen and two linebackers (on obvious running situations).

The wrinkles would occur with how the secondary would cover opposing receivers.

More defenses began running a base defense known as the 3-4 defense, with three down linemen and four linebackers to go with the traditional four defensive backs.

They did this to confuse opposing offenses and keep them guessing at all times.

It was a new base defensive alignment that was created and one that’s stuck around because of its effectiveness.

Who Should Use the 3-4 Defense? A 3-4 formation is great for a defense that has a glut of linebackers who have the ability to both rush the line of scrimmage and also read a play and then react to it on the fly.

Teams with at least three big-bodied defensive linemen, but not a fourth, would do well to adopt this defensive system as well.

The key to the success of a 3-4 defensive alignment is the linebackers...

The formation is known as a one-gap defense, because each of the front seven defenders are responsible for one gap of protection along the line of scrimmage.

This simplifies the game for these defenders who only need to be keyed in on only one responsibility on every play.

Because of this, a 3-4 defense can be very effective against almost any offensive alignment, whether it be a more traditional base offense or a shotgun spread formation.

At the same time, however, the linebackers in a 3-4 defense are tasked with reading the play at the snap of the ball and then reacting based on what they see.

The position is tasked less with playing with their true instincts, and instead relying on their ability to understand what’s happening based on what specific players on the offense are doing.

This is especially true of the insider linebackers, as we’ll explain more in depth later.

Hides the Fourth Rusher - With only three down linemen and four linebackers, the fourth rushing defender on every play is hidden. This rusher can be either of the four linebackers on any given play, keeping the offense confused.

Is Good in Any Situation - A 3-4 defense can be effective against both the run and the pass. Since it is a defense run with one-gap responsibilities, there aren’t a lot of inherent weaknesses to the formation against any offensive alignment.

Simplifies the Game - The 3-4 alignment can simplify the game for defenders, especially the front seven. The defensive linemen and linebackers are tasked with one gap on the offensive line and are asked to attack that gap only.

Good Against Coverage - Defensive coaches have the option of dropping all four linebackers into coverage on any play, clogging up the middle of the field for receivers.

Allows Safeties to Roam Free - With less space in the middle of the field for receivers, safeties have more of an opportunity to give support at the line of scrimmage against the run, blitz the quarterback or provide insurance coverage for cornerbacks over the top.

Requires Linebackers to Read the Play - Linebackers are tasked with playing a read-and-react game on every play in a 3-4 system. That means that they must pay attention to what certain offensive players are doing at the snap of the ball and then handle their assignment based on what that player is doing.

Easier for Offensive Linemen to Get to Second Level - Because there are only three down defensive linemen, that could make it easier for offensive linemen to get a running start at blocking linebackers on a run play, or give them more vision to pick up a blitz on a pass play.

Can Create Mismatches - Offenses that have speedy wide receivers could potentially take advantage of the one-on-one matchups they could have against linebackers. This is why offenses that have the speed and versatility to run a spread against a 3-4 defense will often do so.

You Need Size - It’s important that the three down defensive linemen are big and bulky, able to clog holes along the offensive line on every play with relentless force. This is essential since this alignment is giving up one lineman in exchange for an extra linebacker. The defensive line in a 3-4 defense is made up of a nose tackle and two defensive ends.

Nose Tackle - The biggest body of the three linemen and must be able to clog the interior of the offensive line.

Defensive Ends - Can either be classified as a strong-side and weak-side end, or they can stay on the same side of the field no matter where the strong side of the offense is on any given play.

The alignment of the defensive line in a 3-4 formation is determined by the strength of the offense.

In a strong side shade, the nose tackle will line up either directly over the head of the center or over his shoulder toward the strong side.

The defensive ends will line up over the offensive tackles, either head-on-head or over one of the tackle’s shoulders.

The responsibility for each player on the defensive line is simple:

What gap exactly will be is determined by the play that’s called.

In most cases, the assignments for defensive linemen are to slant to either his left or right side and attack the gap that is in front of him.

This simplification of responsibilities makes it easier for defensive linemen to focus on just plugging up their holes and creating pressure on ball carriers on the quarterback.

While also forcing offensive linemen to always be on the lookout for where that fourth rusher is coming from in the linebacker corps. There are four linebackers in a 3-4-4 defensive alignment.

The inside linebackers’ primary responsibilities are the A gap and the B gap, depending on what play is called and which gaps the defensive linemen in front of them are attacking.

Both the Mike and the Will are tasked with reading the play at the snap of the ball and then either plugging a hole at the line of scrimmage on a running play, blitzing the quarterback on a passing play, or dropping back into coverage.

The Sam and the Will read the play based primarily on what the offensive guard on their side of the field does at the snap of the ball.

On plays in which they are not blitzing, the inside linebackers need to recognize quickly if the offensive guard is dropping back into pass blocking coverage, blocking on a run play straight ahead, or pulling around either the offensive tackle or center in a trap play.

If they recognize a pass play, the inside linebackers will either attack the quarterback or drop back into coverage, depending on the play call.

On a run play where the guard stays in his position, the inside backers must attack either the A gap or B gap on his side of the field, depending on the nose tackle’s responsibility.

On a run play where the guard pulls, the inside linebackers need to slant in the direction the guard is pulling and plug the hole that he leaves behind.

The Sam linebacker will align himself most often either head up with the tight end or on his outside shoulder.

The Bandit will line up outside the weak-side offensive tackle.

Both outside linebackers can have the responsibility to rush the line of scrimmage or drop back into coverage depending on the defensive play call and what play the offense runs.

If the tight end runs a route on a pass play, the Sam linebacker will have primary coverage responsibility on him, unless the Sam is blitzing on that particular play.

The Bandit will have coverage responsibilities on the running back on pass plays in which he runs a route and doesn’t stay in to block.

The Sam and Bandit could also be responsible for dropping into pass coverage in the middle of the field on plays in which either the Mike (for the Sam) or the Will (for the Bandit) is asked to blitz. The secondary in a 3-4 defense is made up of the traditional two cornerbacks and two safeties.

Having this set of personnel on the field allows the defense to run multiple zone defenses or even man-to-man coverage.

The cornerbacks will often align themselves deeper off the line of scrimmage in a 3-4 defense, but could also approach the face of the wide receivers during press coverage plays or when the cornerbacks are asked to blitz.

The strong safety will often play closer to the inside linebackers, depth wise, and line up on the inside shoulder of the Sam linebacker.

The free safety will align himself deep and have over-the-top responsibilities on zone defense against pass plays.

If the defense is running a man-to-man coverage on a pass play, the cornerbacks will be asked to cover a specific receiver for the entire play, no matter where he goes.

In this scenario, the strong safety could either blitz or cover the tight end, if the Sam is blitzing.

The free safety might have coverage responsibilities of the running back if the Bandit is blitzing, or the free safety could be asked to blitz himself.

In zone defensive coverage, the cornerbacks will be asked to cover the receivers up to a certain number of yards from the line of scrimmage.

They are tasked with trying to keep the receivers in front of them, and funneling any ball carrier to the middle of the field, where help can be found to tackle.

However, if a receiver does get beyond the corner running a route, the safeties are there to provide extra coverage on deeper passing plays.

The 3-4 defense is a great base defense to run for just about any team with any make-up of defenders.

While it’s important to have four linebackers who are quick, smart, strong, and read plays well, the 3-4 defense can be adapted for just about any type of personnel.

Unlike a base defensive alignment with either four down linemen and three linebackers, or five down lineman and two linebackers…

Having a 3-4 defense disguises the fourth rushing player on every single play which keeps offenses on their toes.

At the snap of the ball, it’s nearly impossible for the offensive linemen to know exactly who that fourth rusher is going to be.

This now requires even more read-and-recognition from the offensive linemen, who must now identify the fourth rusher on every play, plus potentially a fifth or sixth rusher on blitzing plays.

That’s the main difference between a 3-4 and other base defensive systems.

The 3-4 is designed to cause confusion and a slight delay at the point of attack for offenses.

Even only that split-second difference in reaction time could allow for the defensive pressure to explode through the offensive line and cause fits in the offensive backfield.

In addition, the quarterback must read and recognize on every passing play who that fourth rusher is, and which players on defense are dropping into coverage, instead of simply reading each play exactly the same way.

would love to have this information in a paperback book

[…] 4-4 formation is very similar to the 3-4 formation in that regard, except that the one extra defensive lineman puts a lot of pressure up front on the […]