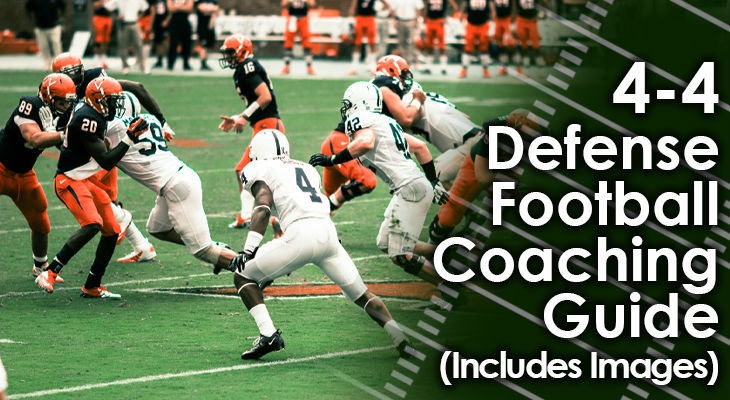 The 4-4 defense is one of the more popular defensive alignments among youth football teams.

That is because this defensive formation allows players at each and every level of the field to learn valuable experience at their position.

And possibly also learn techniques for their future experience, if they end up changing positions based on their developing size and skills.

Growth spurts and development of skills such as speed, agility, and flexibility are attributes that sometimes develop in the latter portion of youth…

So it’s not unheard of for a linebacker to eventually become a defensive lineman or even safety, or vice versa.

That’s one of the reasons why the 4-4 defense is so popular at the youth level of football.

However, from a scheme and strategy standpoint, it’s also a great alignment to run a good, solid defense that can help your team win football games. Who should use the 4-4 defense?

​A 4-4 defensive formation is good for just about any team, and is used quite effectively at all levels of experience and skill level.

While the formation is popular among youth football teams, football teams at both the collegiate level and in the NFL use forms of the 4-4 defense from time to time with great results.

The 4-4 defense is great for teams that have four really good linebackers to get on the field at all times, or for teams with three good linebackers and a strong safety who is bigger bodied and plays very well near the line of scrimmage.

That’s because the 4-4 defense can be run with either four traditional linebackers, or with three linebackers plus a strong safety taking on the role of a fourth linebacker.

The 4-4 formation is very similar to the 3-4 formation in that regard, except that the one extra defensive lineman puts a lot of pressure up front on the offensive line.

Strengths of the 4-4 Defense

​Creates Problems Up Front - A 4-4 defense has four down defensive linemen plus four linebackers playing near the line of scrimmage, creating all sorts of challenges for an offensive line in recognizing who each player should block and then actually blocking them.

Can Confuse an Offense - You never know if there will be extra pressure coming in the form of a blitz with a 4-4 defense, or where that pressure will be coming from. All four linebackers could come on a blitz in any one play out of this defensive formation, meaning each and every offensive linemen has to be aware of this on every play.

Reduces Coverage Time - This extra pressure at the line of scrimmage often means that quarterbacks have less time to throw against a 4-4 defense. That’s a good thing, because there are only three players playing in the secondary in a 4-4 defense.

Is Great Against the Run - A 4-4 defense stacks the first and second levels of defense near the line of scrimmage. This makes it especially hard to run against. Youth football teams often run more than they throw, which is why running a defensive formation like the 4-4 is so popular.

Hard to Run Short Passing Routes - Even though there are fewer players in the secondary on the field in a 4-4 formation, it is often harder to run effective passing routes over the middle of the field, because there are four linebackers clogging that area.

Weaknesses of the 4-4 Defense

​Could Be Susceptible to Passing - If an offensive line is able to effectively block this extra pressure, it could open up big opportunities in the passing game. That’s because with only three players in the secondary, there is a lot more room over the top and fewer players to help in coverage.

Players Have to Read the Play - All players in a 4-4 defense, but especially the linebackers and secondary, have to read and react to each and every play. It’s important that every player in this formation is able to determine quickly whether the offense is running a pass or a run play, and then playing his position accordingly quickly after that recognition.

Susceptible to Misdirection - Because of the above bullet, the 4-4 defense can often be susceptible to play-action passes or misdirection run plays. That’s because if an offense can trick a defender or two into thinking a play is a run instead of a pass, or that a run is going to the left instead of the right, offensive players could find openings in the defense as the defenders are a step or two behind the play.

It Could Create Mismatches - Teams with speedier receivers could have a field day against two outside linebackers trying to cover them. With one fewer safety on the field, most times, speedy receivers could take advantage of the mismatches with linebackers on deeper passing routes. ​Up front are four traditional defensive linemen in a 4-4 defense.

However, unlike the 3-4 defensive formation, defensive linemen in this formation line up and operate a little differently...

In a 4-4 defense, there will be two defensive tackles, but neither is really designated the nose tackle and asked to line up over the center or the center’s shoulder.

Instead, both defensive tackles have the same responsibility and alignment as the other on most plays.

The defensive tackles almost always line up directly over the head of the offensive guard on their side of the field, or slightly shaded to the inside shoulder of the guard, toward the center.

The primary job of both defensive tackles is to blow up the guard opposite him and not allow the guard to release to block a linebacker at the second level or to pull to the outside on a misdirection play.

This makes it important for the defensive tackles to read the snap of the ball properly and have an explosive first step so that the guards aren’t able to make a move either downfield or down the line of scrimmage without making contact with the defensive tackle first.

The defensive ends will also line up similarly to each other, not matter whether they are on the weak side of the offense or the strong side.

This is a little different from the 3-4 defensive alignment, as well.

Both defensive ends are typically asked to line up in what’s called a 5 technique – that is on the outside shoulder of the offensive tackle.

Again, this alignment will be the same whether there is a tight end on their side of the ball or not.

The defensive ends don’t typically have outside contain responsibilities in a 4-4 defense, as they often have in other formations.

That’s left to the outside linebackers.

However, if there is a tight end on their side of the field, that defensive end will be asked to at least make contact with the tight end before attacking the offensive tackle, so as to not allow the tight end to have a free release off the line of scrimmage to block a linebacker or run a passing route with ease. As mentioned before, this Bandit can also be substituted for a strong safety, if that player has the ability to play more like a linebacker.

Whether it’s a traditional linebacker or strong safety playing that role of the fourth linebacker doesn’t really matter, though.

The responsibilities and alignment are the same.

The Mike and the Sam are the two inside linebackers in the 4-4 defensive formation.

They will line up somewhere between the defensive tackle and defensive end and have primary responsibility for the B gap on their side of the field.

The Will and Bandit are the two outside linebackers.

They will line up outside the furthest offensive linemen on their side of the field – whether it be a tight end or an offensive tackle – and will have primary responsibility on outside contain.

If the linebackers read a run play by the offense, their main responsibility is to attack the line of scrimmage and ball carrier through their primary gap.

There are two options if the offense runs a pass play.

They can either utilize a man-to-man coverage scheme, where each linebacker has a specific player they are responsible for covering, or they can run a zone defense.

In a zone defense out of a 4-4 alignment, each linebacker will cover a quarter of the field, sideline to sideline, and be responsible for covering whatever receiver enters their zone.

Having this extra linebacker also allows defensive coaches to run a lot of blitz packages.

This blitz can really come from any of the four linebackers on the field, too, which makes it very difficult for offensive coaches to plan for the blitz, or for offensive players to adjust to the blitz at the snap of the ball. Secondary is the level that sacrifices a player in a 4-4 defensive formation.

The secondary in this alignment will be made up of two cornerbacks and a free safety.

The cornerbacks will often line up about five to seven yards off the outside wide receivers, shading them on their outside shoulders.

The free safety will align himself in the middle of the field, a few yards behind the middle linebackers.

At the snap of the ball, it is essential that every member of the secondary recognizes whether the offense is running a pass or run play, and then react accordingly.

On a run play, the two cornerbacks will be tasked with shedding blocks by the wide receivers and funneling any ball carrier to the middle of the field where there is help with the ample linebackers.

The free safety will also attack the line of scrimmage but needs to realize he is the last line of defense on the field.

If the defensive coach calls a man-to-man defense against a pass play out of the 4-4 alignment, each player in the secondary will have a player he is responsible for covering.

The cornerbacks will take the wide receivers they line up across from, while the free safety will often have responsibility to cover the tight end.

If the play run is a zone defense, then the members of the secondary will split the field in thirds, sideline to sideline, and drop back in pass coverage that protects against the deep pass, beyond the depth for which the linebackers are responsible.

​The 4-4 defense is such a popular option for youth football teams for many reasons.

First, it allows every player, no matter what position, to learn all aspects of the game.

This gives them flexibility as they grow bigger and stronger and get faster, and may end up switching their specific position on the defense down the line.

The 4-4 isn’t just good for youth football teams, though…

In fact, it can be a very solid option for any skill and experience level.

That’s because the 4-4 defense can be run with many, many wrinkles.

In addition, the 4-4 defense makes it very hard for offenses to recognize where the pressure is coming from on any given play, and makes it extra difficult to pick up on every player that may be attacking the line of scrimmage.