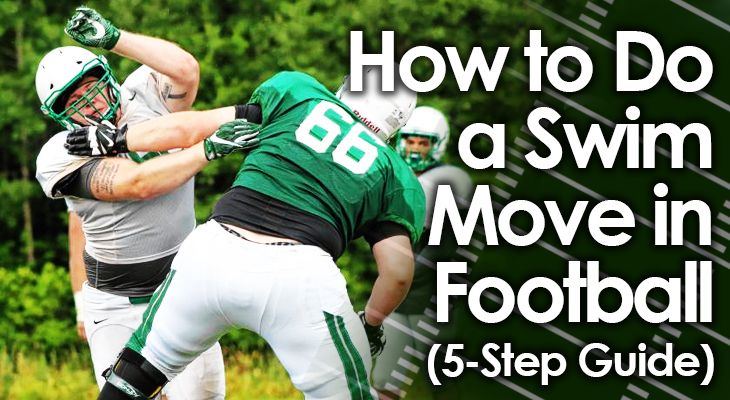 There are many different tactics defenders can use to shed blockers and make their way into open space.

One of the most popular methods of doing so for defensive linemen is the Swim Move.

With the Swim Move, the defender will do something that goes against common football logic...

They will go OVER THE TOP of their blocker rather than staying low the entire time.

This description isn't 100% accurate, as defensive players will still want to stay low at first when they're going to do a Swim Move...

That being said, the signature move of this technique is moving their arm in a circular motion above the blocker, in a "swimming motion", rather than trying to burst through him low.

The Swim Move is one of the oldest and most successful tactics defenders can use to break through blockers.

Below is a step-by-step guide for how defenders can use the Swim Move.

How to Do a Swim Move in Football

The Swim Move in football involves the defender making initial hard contact with the blocker to create some separation.

He will then take one arm and "swim" over the blocker to get by him.

There are a few steps to follow to complete a successful Swim Move, and we'll lay them all out for you in a step-by-step guide below.

A key to performing a successful Swim Move is to freeze the offensive lineman's feet.

By doing this, you will keep him off balance and prevent him from establishing a great base from which he can use to block you.

The most common way that you can "freeze his feet" is to burst hard out of your stance and then take a stutter step.

Executing this will require you to chop your feet quickly on the ground.

When you do this, instead of just plowing straight ahead -- or to one particular side -- you will make him think you're going to cut to one side or the other.

The lineman will then likely wait for you to make that cut, which will result in him resting on flat feet.

This sets him off-balance a bit, and doesn't allow him to explode to you to make contact.

Step #2: Decide Which Direction to Cut

At this point, you want to decide which side you want to cut to -- either inside or outside.

If you're new to the game and just learning how to play, it's likely that your coach will determine your attack direction for you.

At the more advanced levels of the game, however, defenders will often get to see how the play develops and make that call themselves.

Deciding where to cut will determine what your next move will be, as you'll attack the offensive lineman in different ways depending on what direction you're going in. 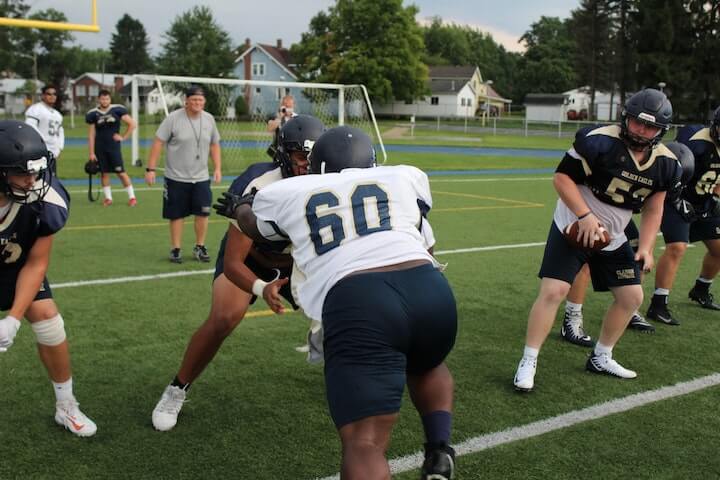 Another key to a successful Swim Move is to deal the first blow.

In other words, you want to be the one dealing the initial contact, as it'll get the offensive lineman off balance even more.

If you rush through the inside, you should place the inside hand on the inside shoulder of the offensive lineman.

If you're headed to the outside, your outside hand will be on the outside shoulder of the offensive lineman.

With this hand, deal a strong and decisive first blow.

The idea is to put pressure on the lineman's shoulder so that you're actually pushing his whole body that way.

If done correctly, his upper and lower body will actually twist in the direction of your blow.

After dealing the first blow, use your other hand to "swim" over top.

Take note that "swimming" should be in one continuous motion.

First, your hand will deal the blow to his shoulder.

Then, your opposite arm will "swim" over top the lineman's body in a circular motion.

It will look as if you are doing a freestyle swimming motion with your arm -- which is where the move gets its name.

To complete the Swim Move, follow through by moving your body in the direction of where you're 'swimming'.

For example, if you used your right arm to swim over the offensive lineman, you should then head to your left.

When done correctly, you will have completely gone past the offensive lineman and will have free room in the backfield.

Make sure that once you complete the Swim Move and get into open space, you remain as low to the ground as you can.

This will get you in the best position to make an immediate tackle if need be, or pursue a ball carrier or quarterback.

The Swim Move is one of the oldest strategies defenders use to get themselves free from blockers, especially along the line of scrimmage.

It has stood the test of time due to its success when executed properly.

Learning how to do a proper Swim Move is actually quite simple, as there are only a few steps that you need to follow to do it.

Follow this guide and practice it over and over again, and you'll be doing successful Swim Moves in no time!