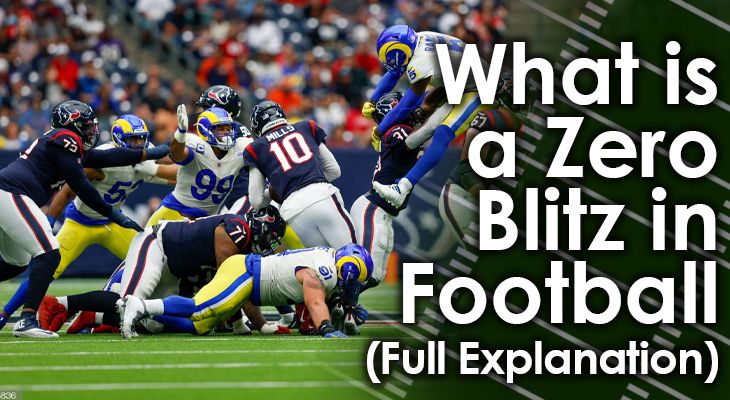 Defenses are always looking for new and innovative ways to put pressure on the opposing offense.

They do this by instituting different types of defensive formations, coverages, and rushes to disrupt the offense's blocking scheme and get to the ball carrier.

Sometimes, defensive coaches want to put extra pressure on the quarterback by rushing more defenders than they normally would.

This is what's referred to as a blitz.

Blitzes occur when extra defenders such as linebackers, safeties, and even cornerbacks rush the quarterback on a play.

There are many different types of blitzes that coaches can go with, based on the situation and how they want to attack the quarterback.

One of these types of blitzes is the Zero Blitz, and it's one of the riskiest blitz packages in the game of football.

Let's dive deeper into what a Zero Blitz is so we can understand why it's so risky, as well as understanding when coaches might want to use it.

What is a Zero Blitz in Football?

A Zero Blitz is a type of blitz that defensive coaches can call to disrupt an offense.

It's considered the riskiest of all the blitz packages, because there is no extra coverage on top of the defense.

In other words, every defender who isn't matched up with an individual on the offensive team will blitz.

Their only job is to get in the backfield as quickly as possible and get to the ball carrier -- whether that be a quarterback or a running back.

Each cornerback matches up with a wide receiver. If there is one running back in the backfield, he will most likely be the responsibility of the Mike linebacker.

If there is one tight end on the field, the Sam linebacker will be responsible for covering him.

If there are two tight ends, then both the Sam and Will linebackers will cover the tight ends.

Meanwhile, every player without a specific assignment will be blitzing.

A good way to understand the Zero Blitz is to break down a scenario.

For this one, the offense will be running with one tight end, one running back in the backfield, and three wide receivers.

The defense will counter this alignment with four down linemen, three linebackers, two cornerbacks, a nickelback, and a safety.

The Mike will pick up the running back, while the Sam will picks up the tight end.

Each of the two cornerbacks plus the nickelback will pick up a wide receiver.

That leaves the safety and the Will without direct individual assignments.

In a Zero Blitz package, this means both of these players will be blitzing. 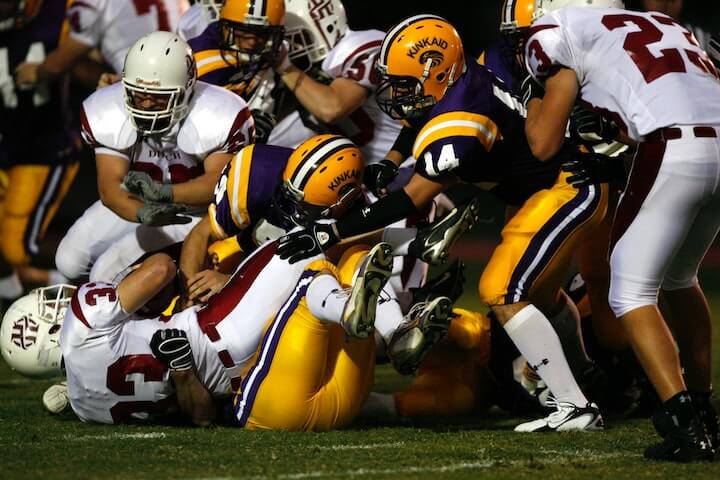 Risks of the Zero Blitz

The main risk to a Zero Blitz is that it provides no just-in-case coverage over top for the defense.

On passing plays, the offense will have one-on-one coverage with all of their receivers. If a completion is made to a receiver and he's able to break free from his coverage, he could be on the races toward the end zone.

When to Use the Zero Blitz

The risks for a big play against the Zero Blitz are more prominent for passing plays than running plays.

That's why defensive coaches will use the Zero Blitz more times than not in typical running situations.

The coaches will guess that the offense is going to run the ball, and put the extra pressure on the interior of the offensive line by blitzing these extra defenders.

That makes it very hard for the offense to gain any yardage at all.

You'll see the Zero Blitz called a lot in third-and-short situations because of this.

But that doesn't mean that the Zero Blitz can't be called during passing plays...

One of the big benefits of it against the pass is that it will be hard for the offensive linemen to pick up all the blitzing defenders.

This will lessen the time the quarterback has to get rid of the ball, lest he gets hit or sacked.

Why is it Called a Blitz?

This defensive play -- and others like it -- are called a "blitz" after the famous German war tactic.

The Germans called some of their attacks a "blitzkrieg" which, in German, means "lightning war."

The name was most prominently used during World War II when the Germans were fighting in England.

Defensive coaches adopted part of that word, the "blitz," to signify the extra pressure and the "lightning" they'd bring on the field when they rushed the extra defenders on a particular play.

There are many different types of blitz packages in football, and when called properly by defensive coaches, they can cause extreme disruption.

Each type of blitz has a slightly different approach, which is why defensive teams use them depending on different situations.

Considered the riskiest among all, the Zero Blitz calls for every defender who doesn't have a man-to-man coverage responsibility to rush the backfield.

This leaves no extra help at the top of the defense in case a ball carrier breaks free from the first line of defense.

Coaches will often call a Zero Blitz in obvious running situations due to these risks, though it certainly can be effective against the pass as well.