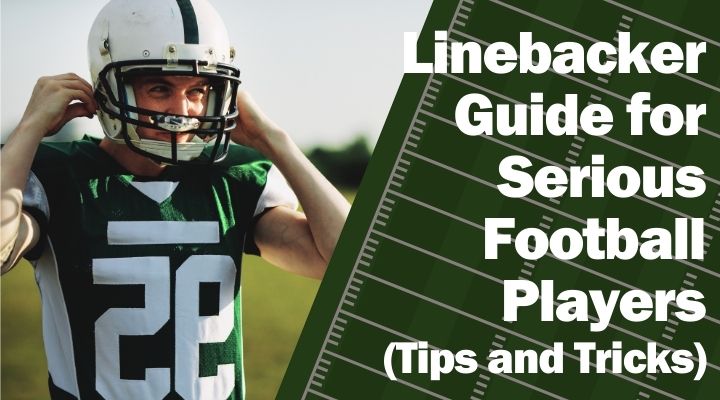 Linebacker is one of the most challenging positions to play.

Linebackers are often thought of as the leaders on the defense -- especially the middle linebacker, who's often responsible for calling plays.

Linebackers need to have a lot of speed to be able to run all over the field chasing down ball carriers, plugging holes along the line of scrimmage, and covering receivers who are running routes.

They also must be physical enough to shed blocks from big offensive linemen and strong enough to deliver impact hits that stop ball carriers in their tracks.

One of the most challenging parts about playing linebacker is having to read the offensive play before reacting.

On every play, linebackers have two responsibilities -- one thing if it's a running play and one if it's a passing play.

This makes the position very unique.

Linebackers have to read the play and react quickly before the play goes by them. If they don't do this fast enough, they risk being out of position which could result in a huge play for the offense.

Great linebackers can have a monumental impact on a football game.

They can completely change the direction of a defense just by being on the field.

Let's take a look at what makes a great linebacker... 5 Traits of a Great Linebacker

Perhaps the most important trait that a linebacker needs is great vision.

Linebackers need to recognize whether the offensive play is a run or a pass quickly to ensure they never find themselves out of position.

Vision, in this respect, doesn't mean 20/20 vision; linebackers need to see the entire field from side to side.

As they line up pre-snap, they need to recognize which formation the offense is in and what his responsibilities would be on that play, both if it's a pass or a run.

A linebacker should understand the down-and-distance and anticipate what’s most likely to happen based on that.

After the play, linebackers need to see what's coming at them from all angles.

Receivers and blockers will be running from every direction, and they must recognize and identify their role based on that.

Linebackers won't be the fastest players on the defense, but they need to be the quickest.

Once a linebacker successfully identifies the play (and his roles based on run or pass), he needs to be able to get to the appropriate spot on the field.

On running plays, he needs to get to the line of scrimmage to fill the gaps quickly.

On passing plays, he needs to run with the receiver he's responsible for covering from what’ll be a standing position -- as the receiver gets a running start.

Both of these things -- and many more responsibilities -- require linebackers to be very quick.

They need to shuffle from side to side, change direction on a dime, backpedal, and run both straight ahead and at different angles.

Check out these linebacker drills to improve speed and agility.

3. Linebackers Are Big, But Not Too Big

Linebackers need to have adequate size to play the position effectively.

They need to have the size to take on offensive linemen who are big-bodied players.

At the same time, linebackers can't be too big that it inhibits their ability to run quickly.

Typical linebackers at the NFL level are around 250 pounds.

Obviously, youth linebackers won't be nearly as big as 250 pounds; it's more about being relative in size to the league's level.

If linebackers don't have the necessary size, they’ll be much easier for offensive linemen to push around at the point of attack.

In fact, players who have the skills of a linebacker but are just a little smaller than most often end up playing safety instead.

Perhaps the most important football-specific skill a linebacker needs to have is the ability to tackle.

Linebackers have to not only deliver devastating hits to stop ball carriers in their tracks, but they have to wrap up and take them to the ground.

All defensive players indeed need to learn how to tackle, but it's especially important for linebackers.

Defensive linemen are almost always being occupied by an offensive lineman. This makes it extremely difficult for them to make tackles by themselves.

Linebackers will have to shed some blockers, of course, but they'll be able to avoid the brunt of the blocks since they don't line up directly opposite an offensive lineman.

Running backs that can get through the line of scrimmage will be looking to either make a juke move to avoid a linebacker altogether or initiate contact and break free for yards after contact.

Linebackers must learn and continually practice on basic tackling skills so they can stop running backs in their track or knock them considerably off course so they don't gain more yards.

One of the linebacker's jobs is to call out plays, formations, and responsibilities before the offense snaps the ball.

Linebackers have to always be reading plays pre-snap and calling out assignments.

They need to communicate with each other and other players on the defense to make sure every player is properly aligned.

Linebackers have the advantage of seeing the entire field before the play starts.

They’re lined up in the middle of the defense and are situated in a two-point stance.

This gives them the ability to see above the linemen and across the whole field which other positions can't do.

They should then take this fact and use it to help other players on the defense.

If a defensive lineman is lined up out of position, a linebacker can scream to him to move over -- or quickly run up and tap him on the back to let him know.

Linebackers can also call out coverage schemes and likely plays to defensive backs who don't have the same sightlines.

The only way to do this effectively is if they’re not afraid to yell out responsibilities.

They need to be big leaders in this regard and not be afraid to be vocal.

A linebacker has a wide range of roles and responsibilities.

1. He Must Not Let Ball Carriers Behind Him

On running plays, it’s a linebacker's job to keep the ball in front of him.

If a running back approaches his third of the field (or fourth in a 3-4 defense), he must make sure that he either stops the running back in his tracks or forces him laterally to where other defenders can help make the tackle.

Linebackers must use their basic tackling skills, shuffle skills, and other types of footwork to do this.

If a ball carrier can get behind a linebacker, he could easily be off to the races en route to the end zone.

2. He Must Not Overcommit

Linebackers must always anticipate the play.

They must identify the most likely offensive play call for a particular situation, and then recognize that play actually happening after the snap.

Oftentimes, linebackers will try to guess as to whether a play will be a pass or run to give them a head start. They need to be careful when doing this, though, so they don't overcommit one way or the other.

A good offense coach will see if a linebacker is running to the line of scrimmage quickly to get a head start on stopping the run.

If they see this, for example, they're likely to call a play-action pass, which could lead to a big gain for the offense if the linebacker gets out of position.

3. He Must Plug Holes at the Line of Scrimmage

The linebacker won't be making the tackle on every play.

On those running plays where he couldn’t get to the ball carrier, he must plug other holes along the line of scrimmage so that blockers have to pay attention to him.

For example, if a running play is going to the right, a middle linebacker needs to approach the line of scrimmage and aim to "blow up" the blocking of the center and guard.

If he forces those two players to worry about him, then it'll free up space for other defenders to break through and make a play.

This goes for passing plays, too.

If a linebacker is giving the responsibility of rushing the quarterback, his sole goal won't always be to record a sack himself.

His job may be to cause enough disruption at the line of scrimmage that another defender breaks free to the quarterback, resulting in either a sack or an errant pass attempt.

3 Tips for a Linebacker

Here are some tips for players who want to be a good linebacker:

This might sound a little odd, but if linebackers are going to properly identify offensive plays, formations, and tendencies, then they’re going to have to spend some time learning how offenses are run.

One of the best ways to do this is to hit the film room with not only a linebackers' coach but also an offensive coach.

This can give linebackers a different perspective on how to react to certain plays, formations, and down-and-distances based on how offenses are likely to think.

2. Work on Your Agility

More so than any other position, linebackers need to be very agile.

They need to backpedal, shuffle from side to side, shift from one side to the other, run at angles, and run straight ahead -- sometimes all in one play.

The only way they'll do that successfully is if they’re very agile.

Linebackers can build agility through specific drills that are designed to teach them how to be nimble.

These drills will work on not only their footwork, speed, and quickness, but also their ability to read and react.

It's so important for a linebacker to be a good tackler that it's worth repeating.

From a physical standpoint, this means you need to hit the gym and work on building strength. You'll need overall body strength in your upper and lower body, as well as your core.

From a technical standpoint, this means you need to work on the basics of the proper tackling technique.

Constantly work with coaches on learning how to wrap, drive through a tackle, and take a player to the ground.

Finally, learn the skill of taking on blocks, shedding them, and making successful tackles.

If you can master this skill, you're on your way to becoming a good linebacker. Linebacker is one of the most challenging football positions to play on defense.

Linebackers need to read and react to plays quickly so that they don't find themselves out of position.

They must be able to tackle and stop the run, while also having the ability to rush the quarterback and cover receivers on pass plays.

There are specific traits, roles, and responsibilities that all linebackers must have.

By understanding what it takes to be a linebacker, you can work hard on achieving those things and improve every day.