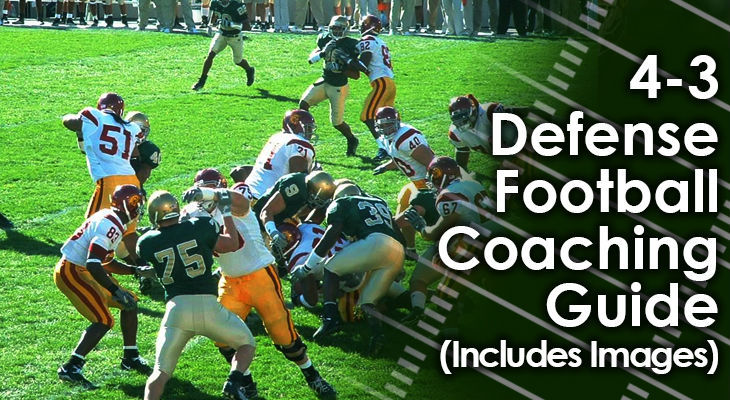 The 4-3 defense is one of the most basic formations a coach can run.

From youth football all the way up to the professional ranks, just about every team has some plays that are run out of the 4-3 formation.

Many coaches choose to use this alignment because there are quite a few wrinkles and adjustments that can be made from the base formation.

Most of the popular zone coverages such as Cover 2, Cover 3, and Cover 4 will run out of a baseline 4-3 formation.

But even man-to-man coverage against the pass is effective out of the 4-3.

All told, the 4-3 defensive alignment is something every coach should have in his or her defensive playbook.

It’s a formation that teaches basic philosophies and responsibilities of playing defense, and can take advantage of various blitz and coverage packages to keep offenses on their toes.

Who Should Use the 4-3 Defense? A 4-3 defense can be used at any level of football, no matter what the physical and skillset makeup of the team is.

Instead of changing the entire alignment to best suit the attributes of the players, a defensive coach can simply tweak the type of 4-3 defense he or she is deploying to suit those needs.

The 4-3 defense is great against the running game because it is a one-gap defense.

That means the front seven players on the field – the four defensive linemen and three linebackers – all have a responsibility for one of the gaps along the offensive line.

This makes it harder for ball carriers to find space to run freely.

In addition, the 4-3 defense provides the support over the top of two safeties who can both help in run coverage, plus in pass coverage, no matter whether a zone defense or man-to-man defense is deployed.

Can Teach the Game - As a one-gap defense, a 4-3 alignment can be a very simple formation from which to teach the basics of football. The assignments for each player are easy and straightforward, allowing them to focus on getting used to playing the game.

Great Against Both the Run and Pass - A 4-3 defense provides strengths against both the passing game and the running game. The one-gap responsibilities make it hard for offenses to run the ball, and the two-deep safeties provide a lot of extra support over the top.

Wrinkles Can Be Added - Defenses at all skill levels can utilize the 4-3 defense because it’s so easy to add in different looks, different coverages, and different pressure packages to keep offenses guessing.

Can Deploy Zone or Man-to-Man Coverage - The most popular types of zone coverage are run out of the 4-3 formation. That’s because there are four defensive backs and three linebackers on the field who can be responsible for different coverage zones on the field.

It’s Very Common - Because so many defenses run some form of the 4-3 defense, it’s not something that offenses are unfamiliar with. This makes it a little easier for offenses to recognize the coverage and also the blocking responsibilities along the line of scrimmage.

Play-Action Passes Can Work - The one-gap responsibilities are great for the linebackers, but it can force them to take their first step toward the line of scrimmage. That means play-action passes could have some success by taking advantage of the linebackers being out of position.

Misdirection Runs Could Work - For the very same reason, misdirection running plays could find a lot of daylight, too. Linebackers have responsibility over just one gap along the offensive line, but it’s very easy for them to lose that responsibility when they see a running back moving a certain way.

A 4-3 defense has four down defensive linemen:

In a base 4-3 play against an offense with one tight end on the field (which happens in most cases), the defense can either shade the line toward the tight end or away from it.

The nose tackle is always responsible for the A gap, no matter which side of the field he is on.

His job is to clog up that gap in any way possible, first and foremost by stuffing the center in his tracks.

The other defensive tackle will be responsible for the B gap on his side of the field, which is the gap between the offensive guard and offensive tackle.

The two defensive ends will also have different gap responsibilities.

The defensive end on the same side of the field as the nose tackle will line up either right over the offensive tackle or over his outside shoulder and will have responsibility for the C gap.

The defensive end on the same side as the other defensive tackle will line up either over the tight end or over his outside shoulder.

They will have responsibilities for either the C gap or outside contain, with the strong safety filling that other responsibility, as we’ll soon see. Similar to the defensive line, the linebackers in a 4-3 defense all have single gap responsibilities against running plays.

The Mike linebacker will line up directly behind the nose tackle or shaded over either one of his shoulders.

His main responsibility is the A gap on the other side of the center.

The Will, or weak-side linebacker, will line up on the side of the center opposite the tight end.

His main responsibility will be the B gap on that side of the field.

The Sam, or strong-side linebacker, will line up on the same side of the tight end, and his responsibility will be C gap on that side of the field.

At the snap of the ball, all linebackers must read the play and recognize it as a run or pass.

If it is a running play, their responsibility will be to rush toward the line of scrimmage to stop the ball carrier, primarily through those gaps just mentioned.

If it is man-to-man, then each linebacker must pick up the player he is responsible for covering.

The Mike will most often be responsible for the running back, the Sam for the tight end, and the Will for help on a wide receiver or the other running back, if there are two in the backfield.

If a zone coverage is called, then the linebackers will split the field in thirds from sideline to sideline.

Each linebacker in a zone coverage out of a 4-3 formation will be responsible for covering any offensive receiver who enters his zone of the field. Two cornerbacks, a free safety and a strong safety will be on the field at all times in a 4-3 defense.

On certain blitz or run-heavy packages, either the free safety or strong safety might also line up much closer to the line of scrimmage.

On a run play, each player’s responsibility is quite simple…

The cornerbacks’ job is to shed blocks by wide receivers and funnel the ball carriers back toward the middle of the field at the very least.

Both safeties will approach the line of scrimmage as quickly as possible and shed whatever blocker comes his way.

Like linebackers, the secondary will have different responsibilities on pass plays depending on whether a man-to-man or zone coverage is called.

In man-to-man calls, the cornerbacks will be responsible for the wide receivers opposite them.

The strong safety might have coverage responsibility of the tight end or a second running back out of the backfield.

The free safety will have responsibility over either a second running back or a third wide receiver.

In zone coverages, each player will be responsible for a different area of the field to cover.

What area that is will depend on which type of zone coverage is called.

In a Cover 4 zone coverage, for example, all four players in the secondary will drop deep into coverage and split the field in fours from sideline to sideline.

The 4-3 defense is one of the best base defenses to run in football.

Which is why teams across all ages and skill levels usually run some form of the alignment.

The 4-3 defense is extremely effective against both a running play and a passing play, giving defensive coaches even more flexibility when calling a specific play out of the formation.

While the popularity of the 4-3 defense also makes it something that offenses are used to seeing and can more easily plan for, that fact doesn’t take away from the alignment’s potential effectiveness.

If taught and executed properly, the 4-3 defense could be the best fit for your team, no matter how long you’ve been coaching and how long your players have been playing.

GREAT ARTICLE.I ALWAYS RUN THE 4-3 WITH LOTS OF SUCCESS!!

I like the four three a lot and it is very familiar to me and i feel like with our coaching we can make it work to the best of our abilities.

[…] Nickel isn’t that much of a deviation from a base 4-3 defense. The only difference is the swapping of a strong-side linebacker for an extra defensive […]