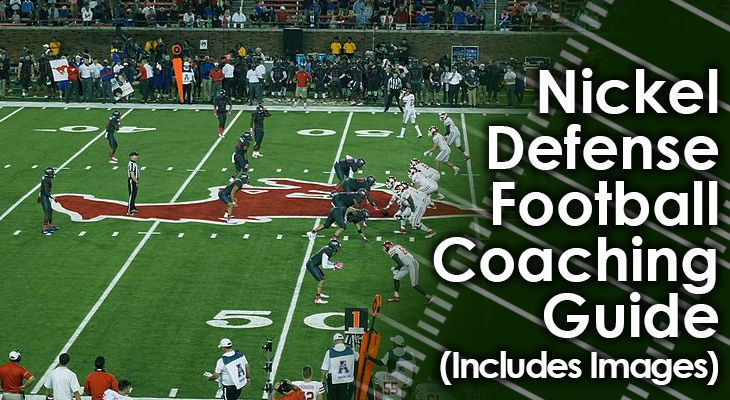 There was a time in football when the Nickel defense was used only in particular situations.

When the offense was in an obvious passing situation, defenses would respond by taking a strong-side linebacker off the field and replacing him with an extra defensive back.

This gave them more speed and coverage ability against an offensive formation that more times than not featured an extra wide receiver.

This extra player, called the nickelback, was often the third best cornerback or third best safety on the field.

So while he was probably better than the linebacker he substituted for in terms of coverage abilities, he wasn’t good enough to see the field very often in regular base formations.

But as offenses at the collegiate and professional levels started progressing into passing the ball more often and running a spread formation, defenses began realizing that the Nickel defense was a great option to run as a base formation.

Either making sure the team had a fifth really good player in the secondary, or moving a starting safety or cornerback into that nickelback position.

Who Should Use the Nickel Defense? 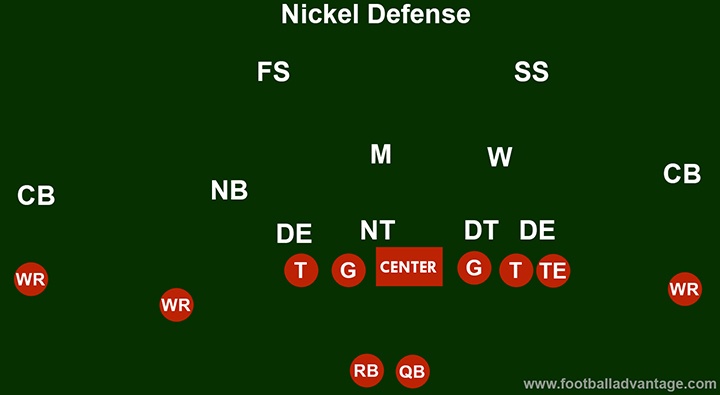 A Nickel defense can be used for teams of any level of experience.

The Nickel isn’t that much of a deviation from a base 4-3 defense. The only difference is the swapping of a strong-side linebacker for an extra defensive back.

While the formation was designed to defend against the pass, if it’s use properly, it can still be very good against the run too.

This is especially true if the player who mans the nickelback position is one of the normal starting safeties on your team. That player must have a lot of versatility to tackle, run with receivers, and provide excellent coverage.

The key to the effectiveness of a Nickel defense is the nickelback.

While the formation can be good employing that extra defensive back as the nickelback, it’s most effective when the nickelback has a lot of skill.

Allows For a Faster Defense - The extra defensive back will provide the defense with a lot more speed than a base 4-3 formation with three linebackers and four defensive backs. This is the main reason why it is a formation that was created to stop the pass.

It’s Versatile - With this nickelback playing much closer to the line of scrimmage than your strong-side linebacker would, this provides a lot of opportunities for blitz packages, extra pressure, and even more run support.

Can Be Confusing - A good nickelback will be a constant threat on the offense. Quarterbacks need to look all the way out to their left or right to see if a blitz is coming, something they don’t have to do very often. Running backs in the backfield who would be responsible for picking up this blitzer have to do the same thing, causing at least a little hesitation on the offense’s part.

Can Be Simple or Complex - If you are a youth football coach with players lacking experience, you can run the Nickel and keep all the defensive backs in their normal positions. Or, you can get much more creative like a lot of teams at the collegiate and professional levels have, using different players in the nickelback position and running various blitz packages.

Opens Up Space - One thing offenses have done to counteract the Nickel defense is to spread the field with their formations more. With the third wide receiver lining up further outside, this pushes the nickelback’s alignment closer to the sideline. That then frees up space over the middle of the field, where the outside linebacker would normally align himself in a 4-3 base defense.

Fewer People to Block - Offensive linemen love a Nickel defense if there isn’t a blitz. That’s because the alignment makes for one fewer player that they have to block. With one fewer linebacker, that means the six offensive linemen (including the tight end) have six rather than seven defenders to block.

More Room to Run - It’s fairly obvious that a defensive alignment created to stop the pass opens up room to run the football. Defensive coaches who ran the Nickel defense not long after it was created were willing to give up shorter running plays because they could limit the total number of yards they gave up.

How to Run the Nickel Defense 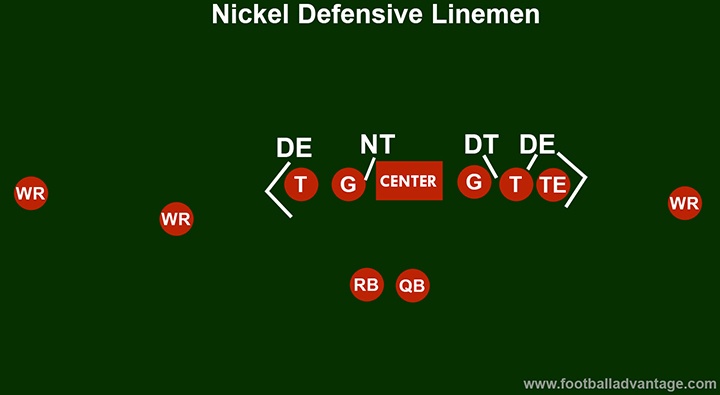 The Nickel defense is very similar to a base 4-3 alignment when it comes to the defensive line.

The only potential deviation from this is that a Nickel alignment is best run with a traditional big-bodied nose tackle who can clog up the middle of the line.

The nose tackle will align himself in a 0-2 technique, from heads up on the center to the inside shoulder of the offensive guard.

This player’s job is to clog up the middle of the offensive line, attacking the A gap and trying to take on two blockers on every play.

If he’s able to do that, he will free up the linebacker behind him to cover the B gap on that side of the field on running plays.

The other defensive tackle will line up in a 3-4 technique, over the other offensive guard or his outside shoulder.

This player will have either A or B gap responsibilities on this side of the field.

Most of the time, he will attack the B gap, except in the rare case where the tight end lines up on the side of the center opposite him.

In those cases, this defensive tackle will attack the A gap most of the time.

The defensive ends are outside technique players in a Nickel defense.

These players’ responsibilities are to blow up the outside of the line, causing as much havoc as possible in the backfield, but also serving as outside contain.

This is especially important for the end away from the tight end, because the Sam linebacker won’t be on the field to provide extra support. 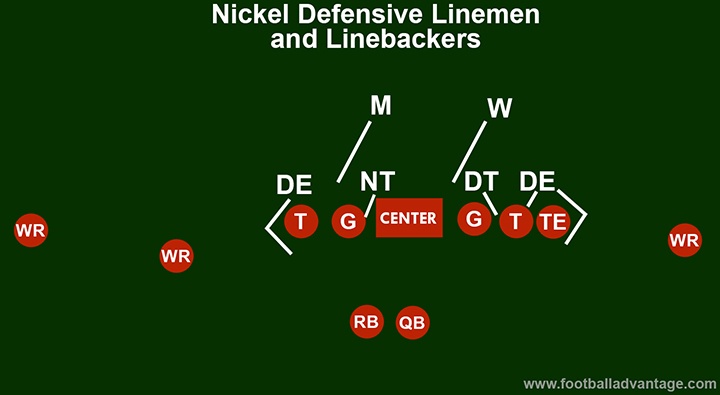 The strong-side (Sam) linebacker is not on the field in a Nickel defense.

The Will will actually line up on the strong side of the field in a Nickel defense, since that extra support will be needed in these situations, much like this player would in a 3-4 alignment.

However, it’s essential that the Will is the linebacker who remains on the field in a Nickel and not the Sam, as the Will is often better at running around and covering, or blitzing the quarterback – two things that are of great use in a Nickel.

The Mike will man his traditional spot in the middle of the defense.

On running plays, the Mike will have responsibility over the B gap on his side of the field, as the nose tackle in front of him will be clogging up the A gap.

The Will will have responsibilities over the A gap on his side of the field.

If he reads that the running play is going to the outside, though, he should slide toward the play, with an eye on that A gap the whole time in case of a cut-back run.

The Nickel can run both a zone or man-to-man coverage against passing plays, or could even run a hybrid of it.

In man-to-man, the Mike will have responsibility for covering the running back, if the back lines up on his side of the field.

If not, he will most often be used to spy on the quarterback or scan the field to see where he is needed in support.

In man-to-man, the Will most often covers the tight end, but could also be asked to cover a running back.

Zone coverage would allow both linebackers to split the middle of the field into fourths with the two cornerbacks, who will take the outside quarters. 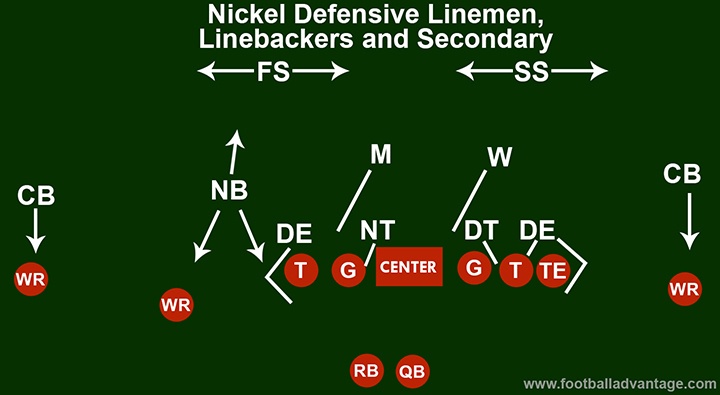 The secondary employs five defensive backs in a Nickel defense.

The nickelback has a few options for alignment…

This alignment in between the receiver and end can create a lot of confusion for offenses.

This is why this is the preferred alignment for the nickelback.

In man-to-man coverages, the two cornerbacks and nickelback will each matchup against a wide receiver.

There are options for both safeties here…

Either they can be assigned a player to cover – such as a running back or tight end – or they can provide zone-like coverage over the top.

The latter is the most likely scenario in the Nickel defense, as it’s a nice hybrid for coaches to run.

In a pure zone coverage, the two cornerbacks will be responsible for the outside quarter of the field, or what’s known as the flat.

The Nickel defense has become an alignment that is becoming more popular to use as a base defense on every play.

That’s partly in response to offenses nowadays spreading the field more often and throwing the football on more plays than they used to.

In response, you’ll see defenses at the collegiate and professional levels running the Nickel as a base formation on more plays.

However, even at the youth levels of football, teams can run the Nickel defense frequently, even though youth offenses run the football more than they throw it.

That’s because the Nickel defense can be good against the run, especially if your team is able to move one of the starting safeties into the nickelback position.

The skillset of the nickelback is the key to the Nickel defense...

If you have a third safety or cornerback who is good enough to play on almost every down, then the Nickel could be a great formation for you to use as a base defense.

Very succinct and informative. Thanks!