How to Catch a Football Easily (4-Step Guide) 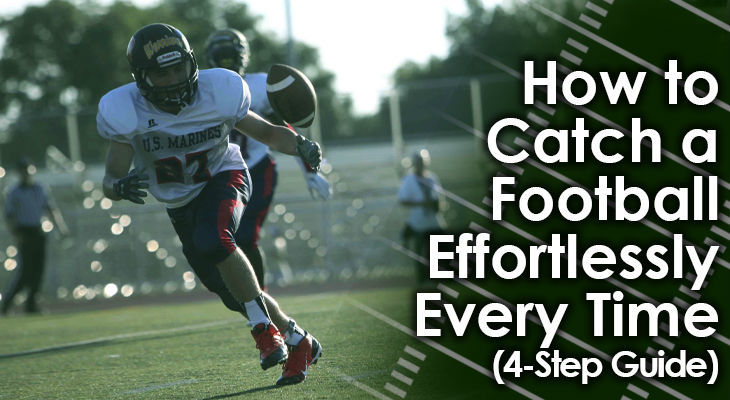 One of the most overlooked parts of training is learning how to catch a football.

A lot goes into a passing play in football…

From the perfect snap from the center, to good pass protection by the offensive line, to good routes run by the receivers, to finally a good pass thrown by the quarterback.

But once all that has been accomplished and the perfect ball has been thrown, a passing play won’t be successful unless the receiver actually catches the ball.

This is easier said than done.

Because of the odd shape of the ball, catching a football isn’t as easy or straightforward as a round object like a baseball or basketball.

And it’s even tougher because you will be catching the football with your bare hands, or with the help of catching gloves, and not a large mitt to soften the blow.

But catching a football doesn’t have to be an overly complicated or difficult process, either.

By following this 4-step guide, you’ll be catching a football the right way every time, in no time. 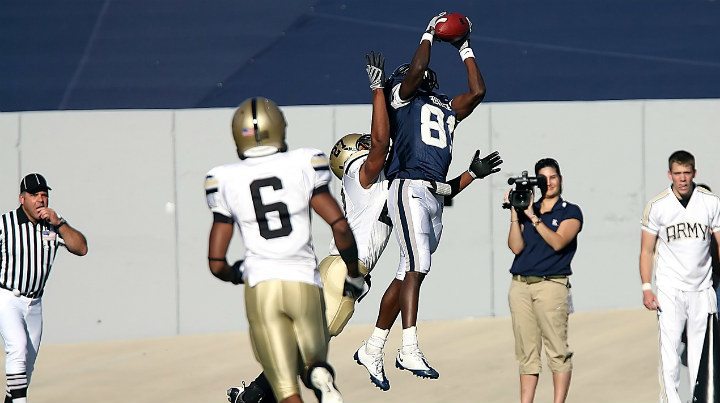 How to Catch a Football

The first step to catching a football is to focus on the position of your body.

Ideally, you’ll want to be able to run your route during a game and then position your body as if you’re simply having a catch with someone with no one else around.

But obviously that’s not always possible during live game action.

Do your best to position your body facing towards the quarterback.

Your chest should be facing the line of scrimmage, with your back facing the end zone you’re looking to score at.

Your feet should be shoulder-width apart, and your arms should be extended out in front of you straight and not bent.

After you’ve positioned your body correctly, it is now time to focus on your hands.

With your arms extended straight out in front of you, you should position your hands in a diamond shape.

In this regard, the tips of your pointer fingers and thumbs on each hand should be touching each other, which will create a diamond shape.

Your other fingers should be spread out normally.

The idea is to catch the football right in the middle of this diamond shape that you have created with your fingers.

This will allow the ball to come in contact with the largest part of your hands, making it much easier to catch and then control the football when it’s thrown your way.

Once the ball has hit your hands and you’ve caught it, the next step is to make sure you grab the football tightly.

You shouldn’t grip it so tight that it feels like you’re going to pop the football, just make sure you have a firm enough grip on the ball that will prevent defenders from easily knocking it out of your hands.

Once you’ve caught the football, immediately rotate the ball into the standard grip position.

This is done by shifting the ball to one of your hands, with tip of the football in the palm of your hand and the rest of the ball pressed up against your forearm.

This will allow you to have one hand free to fight off defenders while also protecting the football from being knocked loose by tacklers.

Once you catch and grab the football, the final step is to tuck it into your body to protect it as you try to gain more yards after the catch.

As you’re turning up the field and running to gain more yards, you should hold the football in the grip described above and then tuck it so it touches close to your body.

Holding the ball out in front of you with your arms extended makes it very vulnerable to being knocked loose by defenders who are chasing you.

The best thing to do is to carry the ball on your outside arm – the one that faces the closest sideline. This will keep it protected from the inside part of the field where most of the defenders are located.

Once you have properly tucked the football, you can run down the field with your arms in a natural motion.

When you know you are going to be contacted by defenders, you should use your free arm to protect the football even more.

Doing so will provide extra protection for when a defender makes the tackle. 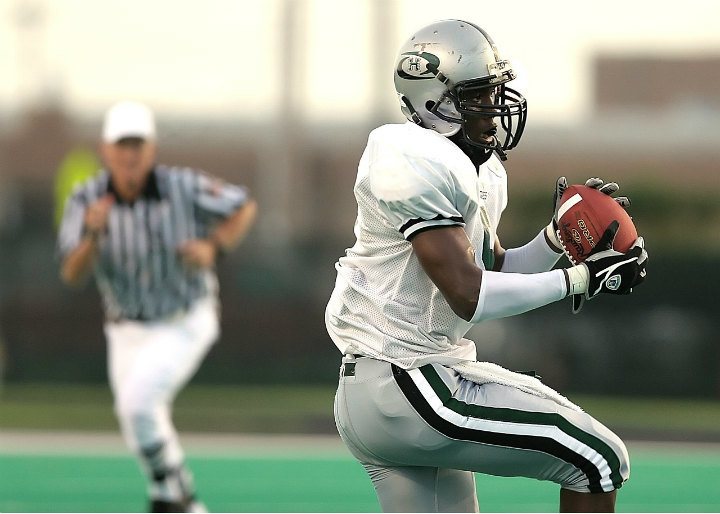 Making Adjustments to the Catch

While it’s ideal to face your body square to the quarterback, this isn’t always possible.

In fact, it’s not very often during a game you’ll be able to position yourself this way and also get the perfect pass thrown to you.

As such, you’ll need to make adjustments on the fly to make the catch every time, no matter what the situation.

a. If the Ball is Thrown Low

If the ball is thrown to below your waist, you’ll have to make adjustments so that you can still make the catch.

Bend your knees so your body can get lower to the ground.

You’ll also need to position your hands a different way as well, with them placed pinky to pinky with your fingers pointed down to the ground.

This will allow you to catch the ball in your hands even though it’s lower to the ground.

b. If the Ball is Thrown to the Side

Sometimes, you may be able to position your body perfectly back toward the quarterback, but then the pass is thrown off to the side of your body.

The best thing to do in this situation is re-position your body by shuffling your feet side to side until you get your body behind the ball.

If you are unable to do that, simply adjust your arms by extending out to your left or to your right, depending on where the ball is thrown.

Your hands should be in the same position, and you can proceed to the next steps once you’ve caught the ball.

c. If the Ball is Thrown Too High

If the ball is thrown higher than expected, you can easily adjust once you’ve initially positioned your body.

Simply move your arms and hands up vertically, with your arms still extended and your hands still creating that diamond shape.

d. If You Catch the Ball on the Run

Not every time will you be able to stop in your tracks and position yourself to make a catch.

In fact, a lot of times, the passing routes you run will require you to catch the football while you’re still running, with the quarterback hitting you with a pass while you’re in full stride.

In these situations, you’ll need to adjust so you can catch the ball while running, sometimes in an over-the-shoulder catch.

To do so, you’ll need to place your hands in a different position to catch the ball.

Your hands must be stretched out away from your body, with your pinkies joined together.

This will form the same net-like pattern as when you are catching a ball that was thrown too low.

However, in this case, your hands will be stretched out above your head position.

The idea is that you catch the ball as high as you can, as this will be the spot that will be furthest away from both the defender and the ground, allowing you to catch the ball with your hands up high and then bring it down into your body to grip then tuck the football away.

Another important aspect here is that your head should be tilted slightly backward so that you can see the ball being thrown your way.

Your head and eyes should then follow the ball as it goes into the air all the way through the downward arch into your hands. 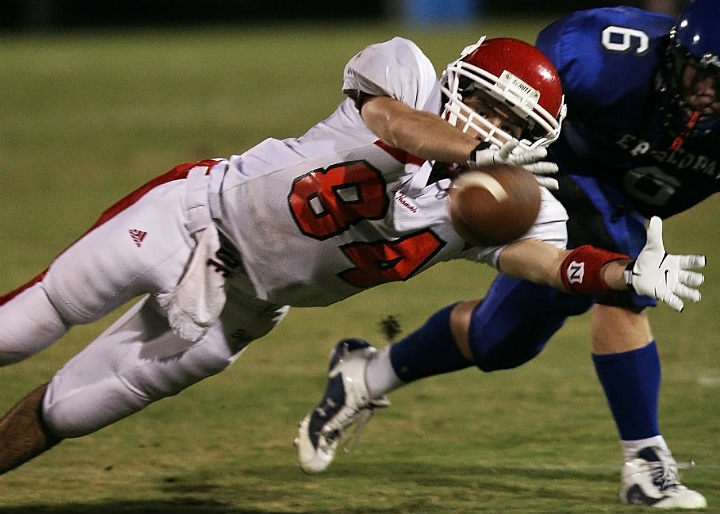 Mistake #1 – Taking Your Eyes Off the Ball

Perhaps the most common mistake that people make is taking their eyes off the football.

Catching is as much about your eyes as it is your hands.

And this makes sense when you think about it...

If you can’t see the ball, you won’t be able to catch it.

The mantra is that you should watch the ball all the way into your hands before you turn your eyes upfield or toward any other part of the field.

Remember that you must first catch the ball before you can worry about protecting the ball from a defender or looking to see how many more yards you can gain after the catch.

Don’t worry about what else is going on around you, and don’t try to anticipate what is coming next by looking around you or down field.

Simply keep your eye on the ball all the way through into your hands, and then worry about the next steps to take.

Mistake #2 – Catching the Ball Too Close to Your Body

This is the next most common mistake that is made when trying to catch a football.

A lot of people might think that catching the ball closer to your body would allow for more protection and a bigger shield to absorb the throw.

However, catching the football this way actually results in less control over what happens.

Because the pads you wear under your uniform are hard to protect you, it can cause the ball to bounce off of them if the ball comes into contact with them.

So instead of your body allowing you to cradle the ball into your hands, the pads that are on your body will more often than not cause the ball to bounce off of them away from your body.

This is why it’s important to catch the ball with your hands away from your body.

Mistake #3 – Not Protecting the Football

Catching the football is only one half of the equation when it comes to a successful pass play.

The other half is protecting the football once you’ve caught it.

Too often, receivers will catch the ball but then grip and cradle it ineffectively and recklessly.

Holding the ball too loosely could cause the ball to slip out of your hands as you’re running down the field or trying to avoid defenders.

Holding the ball too far away from your body and not cradling it firmly makes it more susceptible to being knocked loose by defenders who are trying to make a tackle.

Remember that defenders are taught to not only try to take you down as they try to make a tackle, but also to knock the ball loose.

And while the process of catching is actually quite simple, any one slight miscue in any of the steps could cause for an unsuccessful pass completion, and a bad outcome for the offense.

That’s why it’s ultra-important to follow each of the steps listed above to ensure you catch the football properly.

[…] It's not necessarily a learned skill, such as how to block, how to throw a ball, how to tackle, or how to catch a pass. […]