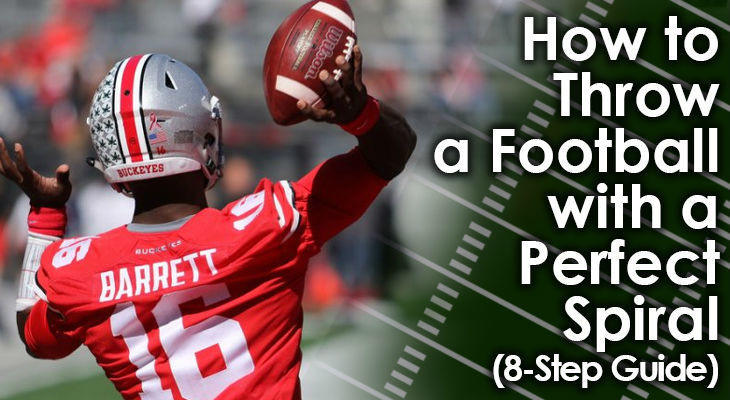 Being a quarterback in football is not as simple as picking up a ball and heaving it downfield.

The position requires years of practice - from learning how to set players up in difficult offenses, to understanding how to read complex defenses.

But let’s start with the basics:

Learning “exactly” how to throw a football.

Because trust me… it’s not as easy and simple as it may seem.

A football is big, oblong, and has raised laces down the middle. All of which make throwing a football much more difficult than throwing a round object like a baseball.

To successfully throw a football every time requires great technique, power, and accuracy.

If combined, the result will be a perfect spiral throw to a receiver.

But first, let’s talk about why the “spiral” is important...

Why It’s Important to Throw a Spiral

​The importance of throwing a spiral is simple when you break it down...

A spiral – with the football spinning around in perfect form – allows the football to cut through the wind and get it its destination as quickly and accurately as possible.

Throwing a spiral in football is similar to how a soccer player kicks a ball, or a golfer hits a ball, or a pitcher throws a baseball.

By gripping the ball a certain way – or hitting/kicking it in the other examples – you can manipulate the ball in just the right way so that when it’s released, it has predictable results.

What this means is that it’s easier for a receiver to predict where the ball will land.

Which will tell them exactly where they need to run in order to catch the ball.

Footballs that are not thrown with spirals can turn or spin with the wind, and often don’t travel in a straight arching path...

If your receivers can’t predict where the ball will travel, it’ll be next to impossible for them to go where they need to in order to catch it.

Now that we know the importance of throwing a spiral, let’s find out how to throw one properly. How to Throw a Football in 8 Steps

Step #1 – Get the Right Size Football

This may not seem obvious, but it’s the first step for a very good reason.

Professional, college, and high school teams use a size 9 football - but that would be entirely too big for a young kid picking up a football for the first time.

The youngest kids who are just learning should start with a size 6 football.

And then depending on their hand size, work their way up, step-by-step, until they get to size 9.

Once you have the proper size ball, you’ll need to position your fingers on the ball in relation to the laces, which help you grip the ball.

Your four fingers should be on top of the ball, on the side where the laces are, with your thumb on the other side of the ball, underneath them.

Your hand should be positioned toward the top end of the football, with at least your ring finger and pinkie in between the laces.

You may also choose to put your middle finger on the laces as well, depending on the size of your hand, or you can position it just above the top lace.

Your index finger needs to be either close to the tip of the football or directly on it.

Your index finger also needs to cross the seam of the football that runs right down the middle of the ball through the laces.

In this way, your index finger will be positioned in the same fashion over the seam as your other four fingers, and will form almost a right triangle with your thumb.

A spiral is created by spinning the football with your hand.

In order to do this, you need to grip the football with your fingertips.

Step #5 – Pay Attention to Your Feet

Now that we’re ready to actually throw the ball, the first step starts with your feet.

If you don’t position yourself correctly with your lower body, you’ll never be able to throw a football properly from your upper body.

You should stand with your feet shoulder width apart to start, with your knees bent slightly.

Then it’s time to distribute your weight…

Then, the weight needs to be shifted toward the front of your body as you take a step with your front leg in the direction you want to throw the football. At the same time your body weight is shifting from your back leg to your front leg, you should begin the proper throwing motion in your upper body.

Your upper arm should be positioned perpendicular with your body.

As you prepare to throw, you should cock your throwing arm straight back and bend your elbow at a 90-degree angle. The football in your hand should be pointed up.

Your other arm, the one that isn’t holding the football, should be thrown out in front of you as part of this process.

This helps balance you as you are shifting your body weight.

When you release the football, you need to push it straight ahead toward your target.

The spiral begins by spinning the football with your fingertips.

When you release the football, your fingers should spin the ball, and the last finger that should be on the ball to give it the final push is your index finger.

You should release the ball at its highest point of your arm motion.

Releasing it too high will cause the ball to turn over itself and not spin in a perfect spiral.

Releasing the ball too late in your arm motion will result in the football dropping to the ground and not making it to its intended target.

You should not stop your arm motion dead in its tracks once the football is out of your hands.

Instead, your arm should complete its circular motion across your body.

When you release the football, your arm should continue in a downward trajectory toward the opposite hip of your front leg.

Your thumb should remain on the top of your hand as it twists in the same spinning motion that you used to create the spiral.

Your back leg should follow your body forward so that you end up with both legs in a similar position parallel to each other. Mistake to Avoid #1 – An Uncomfortable Grip on the Football

​Before you even begin to throw a football, it’s important that you grip it properly.

“Properly” could mean a different thing for different people, so make sure to follow the tips above to learn the correct way players are taught.

You should make adjustments to your grip based on what feels comfortable to you.

For example, people have different sized hands. As such, someone with a smaller hand is not going to be able to grip the football in the same way that someone with a bigger hand might.

The most important thing is that you grip the football on the laces and place your pointer finger near the tip of the football.

But exactly how many fingers you place on the laces depends on what feels most comfortable to you.

The more comfortable your grip is, the tighter the grip will be, and the better you’ll be able to throw the football.

The lower half of your body is just as important in throwing a football as your upper body is.

Not only do you need to properly “lock and load” and shift your weight from the back of your body to the front, you also need to make sure that your legs are positioned properly when you start your throwing motion.

When you’re learning how to throw a spiral, you need to make sure you position your legs square and about shoulder’s length apart.

This allows you to keep your balance when you’re throwing and also get the most power and accuracy behind your throw.

If you watch professional football, you may see quarterbacks position their feet in different ways, throw off the back foot, or have their feet in an odd stance as they are escaping a blitz…

However, these are professional quarterbacks who have perfected their craft.

They started by following these basics to make sure they could throw a spiral every time.

And then after years of practice, they are now able to make stance adjustments during a game to still throw a spiral.

A throwing motion should result in almost a complete circle with your arm. Your arm should go straight back, then up, then forward, then back again.

That last part – the back again – is the common mistake a lot of people make.

You must follow through on every one of your throws if you want to throw a perfect spiral.

Not following through will result in you pushing the football forward instead of throwing it with a full motion.

This will cause the football to be released with not nearly enough power to make its way through the air, and it will cause the ball to wobble out of your hand.

Neither of those things are good if you’re learning how to throw a football with a perfect spiral.

And with these steps down, you’ll be on your way to throwing a football exactly where you want it on every throw. With the velocity it needs to travel down the field and the predictability your receivers need to know where to go to catch it.

Great tips! From beginner to Pro, the fundamentals are the same! Thanks for sharing!

[…] not necessarily a learned skill, such as how to block, how to throw a ball, how to tackle, or how to catch a […]

How to Catch a Football Effortlessly Every Time (4-Step Guide) November 16, 2020

[…] once all that has been accomplished and the perfect ball has been thrown, a passing play won’t be successful unless the receiver actually catches the […]