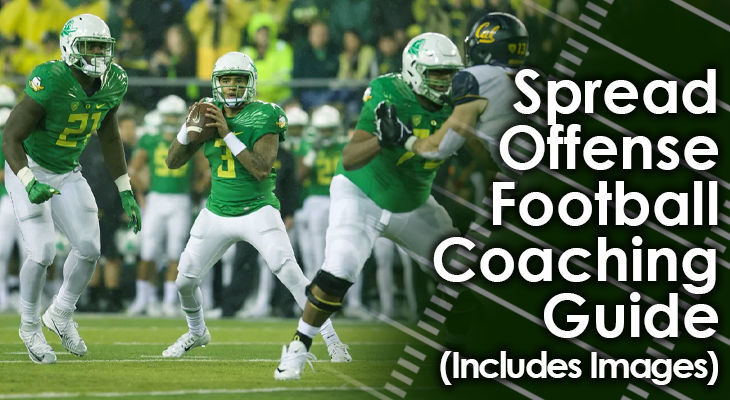 The spread offense is one of the most popular offensive formations used nowadays at the collegiate and professional levels of football.

With coaches at all levels seeing the various benefits of the spread offense, it’s starting to trickle its way down to high school, and to even less experienced levels of football as well.

Instead, it’s most often deployed in one of four ways:

The general theory behind the creation of the modern-day spread offense is to create mismatches and isolations, and then take advantage of those with precise play calling to specific players on your team.

The spread offense is usually run in an up-tempo, quick format, oftentimes with plays called at the line of scrimmage instead of in a normal huddle.

The beauty of the spread offense is that, using one of the four types above, it can be tailored to your offense’s specific personnel.

Whether you have skilled wide receivers…

Or whether you team is more run-oriented.

The spread offense has its pros and its cons, which we’ll discuss below.

And while not all styles of it would be good for every offense to run, there are principals within at least one that just about any team could adopt.

What is the Spread Offense?

The spread offense has evolved over the last 100 years from the earliest days of football to what it is today.

Ironically enough, the spread you see today on the field, which literally spreads the formation of the offense out from sideline to sideline, took its initial principles from what would be considered the least spread-like formation – the triple option.

The triple option was an offense that was run predominantly in the early part of the 20th century before the forward pass was implemented in the game, and then before quarterbacks began throwing the ball down field as often as they do today.

The triple option was all about causing confusion and mismatches and taking advantage of certain situations.

From those principles came a much more pass-heavy offense that focused on creating mismatches – the Run and Shoot, popularized by head coach Darrell “Mouse” Davis at Portland State University in 1970.

This offense was put on the world stage in the 1990s with the Atlanta Falcons and head coach June Jones, who learned the offense under Davis.

The Run and Shoot focused more on the passing game, spreading the offense out and throwing the ball all around the field.

It is the closest thing there is to the modern formats of the spread offense, which take these principles but then work in the running game more to be less one dimensional.

Who Should Run the Spread Offense?

The spread offense could be tailored to just about any group of offensive personnel, as tweaks can be made to cater to the skillset of the players you have on your team.

However, the spread offense can be more complicated to run, especially for the quarterback who has to make a lot of reads and decisions on the fly at the snap of the ball.

The spread offense can also have a lot of complicated calls and a lot of different blocking assignments.

For this reason, you mainly only see the spread offense run at the collegiate and professional levels.

It may be too difficult to teach to players who are just starting the game at a younger age or who are new to the game altogether.

However, if your team is a little more advanced or if your players are more experienced, the spread offense is a formation that could be great for you to use even at the middle school and high school levels, as there won’t be too many defenses that will be used to defending it.

The key is whether you have a quarterback that can throw, might be able to run and is really good at reading holes and opportunities in the defense. The Air Raid spread offense was made first made popular at the collegiate level.

Coaches such as Mike Leach at Texas Tech used the offense in the 1990s to completely beat defenses into submission by throwing the ball all over the field.

The Air Raid took the West Coast passing game that became popular around this time, simplified it, and then unleashed it with a strong, option-based vertical passing attack.

The formation is run with the quarterback out of shotgun, not under center, with one running back next to him and four wide receivers on the field with no tight ends.

Leach’s version of the Air Raid had very few run plays worked in, and the running back was on the field more for pass protection and as a receiver out of the backfield.

Tweaks to the Air Raid put in more running plays that involved plays where the quarterback could run on his own.

In the Air Raid, all four wide receivers start by running straight Fly routes deep down the field to draw defenders away from the line of scrimmage and the middle of the field.

Then, as the play develops, one or more of the receivers might break off the Fly route to either a curl, comeback, dig, or out route to get to the open space that was left free.

This version of the spread offense requires a lot of speed at the wide receiver position, a quarterback with a strong and accurate arm, and the ability for the receivers and the quarterback to recognize the defense’s weakness as the play is developing and make in-synch adjustments on the fly.

It also requires the wide receivers to have a lot of stamina, as they’ll be running a lot. The Spread Option first became popular at the college level with Urban Meyer at Utah and then at Florida, especially at the latter destination with quarterback Tim Tebow.

While this version of the offense is a similar formation before the snap, it works in a lot more running plays.

The Spread Option will normally utilize three wide receivers plus a tight end, along with the quarterback out of shotgun and the running back next to him.

It’s a play that’s the core of the Spread Option, and it is designed to keep defenses guessing on every single play, freezing the linebackers and safeties from knowing whether it’s a pass or a run at the snap of the ball, and then taking advantage of the fact that they’re behind a step because of this.

At this point, the quarterback has three options:

(1) If he sees that there are open holes to run through on the inside of the offense, he can hand the ball to the running back, who will then run it through one of the holes.

(2) If he sees that there are open holes to run through on the outside of the offense, he can pull the ball back, faking the hand-off to the running back and instead running it himself to the outside hole.

The key to running a successful Spread Option is having a smart, versatile and skilled quarterback.

This player must have a good arm, must be a threat to run and must have the smarts to read defenses and make decisions on the fly. This is the version of the spread that teams at almost any level of football could use.

That’s because this version deploys a lot more running plays than some of the others, and utilizes zone blocking schemes that are similar to other more traditional offenses.

The formation principles of the Smashmouth Spread are the same, though

Three wide receivers will split out wide, often on the same side of the field, the offensive linemen will take wide alignments along with a tight end, and the quarterback will be out of shotgun with the running back next to him.

The Smashmouth is similar to the Spread Option in that it will utilize the read option on a lot of plays.

More often than not, though, this form of the spread will look to smash the ball forward on the ground and not through the air.

Teams that run the Smashmouth Spread often have bigger, bulkier offensive linemen who can punish defenders and move them around with ease.

Running backs and even quarterbacks on these teams might be on the bigger side as well.

The ultimate goal of the Smashmouth Spread is to take advantage of mismatches and holes created at the line of scrimmage with a strong lead power running game that will ultimately set up big plays in the passing game with play-action calls out of the read option.

The passing game will almost always attack either the deep part of the field or the short part with wide receiver screens.

The middle depth is reserved for routes run by the running back and the tight end. This last version of the spread offense is, not surprisingly, tailored more for offenses that run more of a basic Pro-Style offense.

Basically, many teams at the NFL level have liked what they have seen from some concepts of the spread, but still have an elite blocking offensive line and a great running back, so they don’t want to completely abandon the running game.

In addition, defenders at the professional level are bigger, stronger and faster than their lower-level counterparts, so some of the pure designs of the other spread offense styles just wouldn’t work here.

The idea behind the Pro-Style Spread is to use the same spacing and up-tempo pace to create mismatches, keep defenses off balance, and keep defensive coaches from being able to make substitutions for tired defenders.

Through this, the Pro-Style Spread will often run what it calls the Run-Pass Option (or RPO), which is basically just a glorified read option play, with the quarterback running not very often so he stays protected.

This Pro-Style Spread will have receivers running more traditional routes such as slants, outs and ins, and will incorporate the running game quite often to keep defenses off balance.

As you can see, there’s a little something for everyone when it comes to the spread offense.

While each of the four main styles of the spread are similar in their design and the concept behind them, each is different enough that it can be tailored to many different offenses with many different types of skill sets and personnel.

[…] you turn on the TV to watch a professional or collegiate football game, you’ll often see spread offenses, shotgun offenses, and other formations that are designed to spread the field and throw the ball […]

[…] Pistol is a combination between the traditional Spread Offense run out of the shotgun formation and the Pro Style offense, which has two running backs lined up in […]