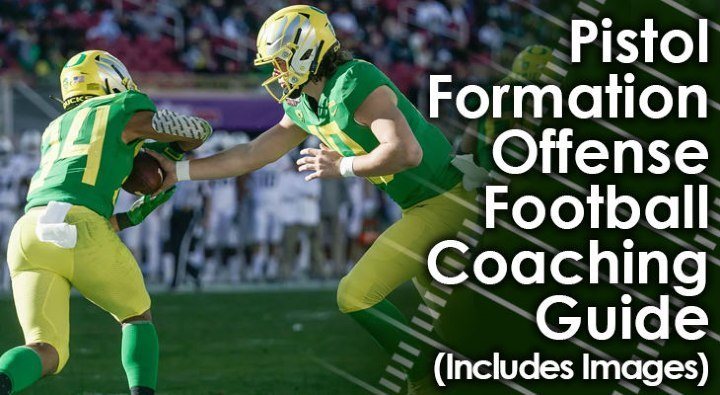 The Pistol formation is an offense that marries two other types of offenses together to make a new hybrid type of offense.

The Pistol is a combination between the traditional Spread Offense run out of the shotgun formation and the Pro Style offense, which has two running backs lined up in various positions in the backfield.

The Pistol formation has the look of a run-heavy offense, but it can also utilize some of the principles of the certain Spread Offenses to be more “pass happy.”

It’s used primarily by teams that want to pound the football on the ground with a plethora of blockers, both up front at the line of scrimmage and out of the backfield as well.

The best part about the Pistol formation is that even though it is loaded up with personnel who can run or block, it will also use two traditional wide receivers, allowing for enough deception pre-snap to keep defenses off-guard.

Who Should Use the Pistol Formation Offense?

Teams Who Like to Run the Football - The Pistol formation has a heavy presence of players in the backfield, as we will soon see. This provides for not only solid running options out of the backfield, but for solid lead blocking as well.

Teams Who Like to Change It Up - For teams that like to run a non-traditional offense, the Pistol could be perfect for them. The offense could run a Read Option pass on one play, and on the next play, could smash the ball downhill with a run up the gut.

Teams Who Have Versatility - While a Pistol formation could be used just to run the ball, it’s at its best when each play is different than the last. As such, having a solid core of blockers, pass catchers and a good quarterback is necessary.

Teams With a Smart Quarterback - Again, the best Pistol formation offenses are those that can implement aspects of a Spread Offense into their game plan, and that requires a smart quarterback who can properly read defenses once the ball is snapped.

Who Should Not Use the Pistol Formation Offense?

Teams Who Like to Keep it Simple - The Pistol formation might not be the best fit for youth teams with players just learning to play the game. While simple plays can be run out of the Pistol, it’s not really what the offense was designed for.

Teams Who Are Undersized - When a Pistol formation offense does run the ball, they often do so up the middle where there are a lot of defenders. Teams that are undersized and aren’t built for the type of collisions that happen in the trenches might want to opt for a different offense.

Teams With an Immobile Quarterback - A traditional pocket passer isn’t best suited for a Pistol formation. Without the threat to run, or at least scramble around in the backfield, a Pistol formation can become predictable over time. 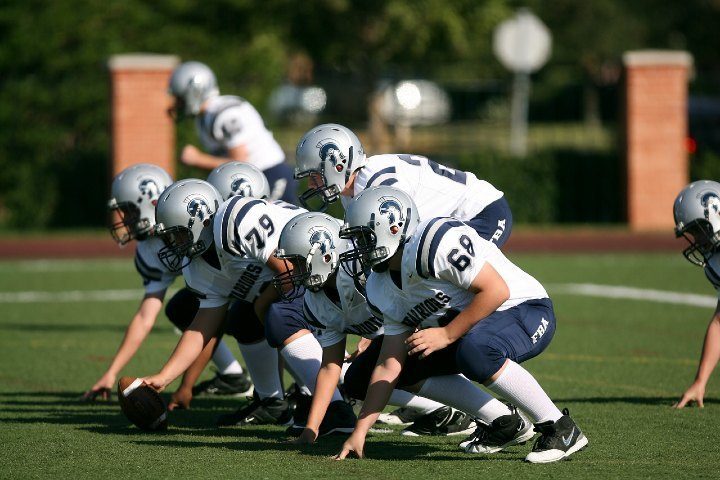 The Pistol formation will look a lot like an I-Formation when it comes to the personnel it has on the field.

With two wide receivers and two running backs in the backfield with the quarterback, you could be tricked into thinking it was an I-Formation offense, if it weren’t for how the players lined up (more on that in a bit).

Here is the more traditional personnel in a Pistol Formation offense:

The Pistol formation’s hybrid nature comes to the forefront in how the players line up before the snap.

As mentioned before, the Pistol will have a lot of similarities to the I-Formation in terms of alignment, with some slight variations that make it look like a more traditional shotgun Spread Offense

The standard formation for all Pistol Formation plays are:

Center: Will line up in his normal position

Guards: Both will line up in their normal positions, on either side of the center

Offensive Tackles: Both will line up in their normal positions, on either side of the guards

Tight End: Will line up at the line of scrimmage, next to either offensive tackle, depending on where the strong side of the offense is on any given play

X Wide Receiver: Will line up on the weak side of the field, opposite the tight end, split out wide near the sideline. He will line up at the line of scrimmage.

Z Wide Receiver: Will line up on the strong side of the field, on the same side as the tight end, split out wide near the sideline, about a yard or two off the line of scrimmage

H-Back: Will line up in the backfield about two yards deep, between the guard and the offensive tackle on the strong side of the field, most of the time

Running Back: Will line up in the backfield directly behind the quarterback, about two yards behind him

To understand how the Pistol formation is truly a hybrid between a Pro Style offense and a shotgun Spread offense, we’ll want to take a look at both a power running play and a passing play. 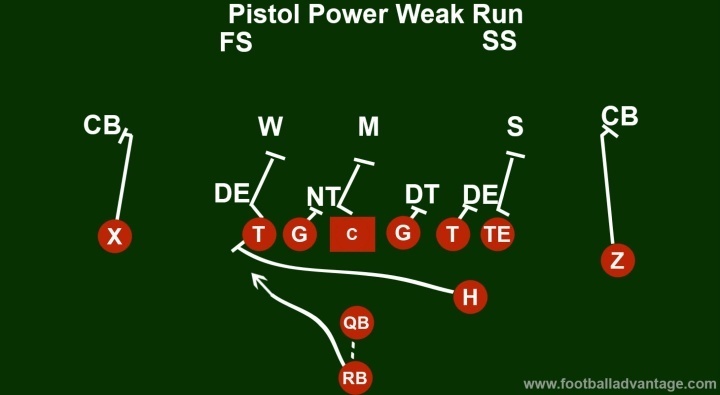 On this play, the offense will load up on the right side of the field with both the tight end and the H-Back, making the defense think the play is going to go to the strong side.

At the snap of the ball, though, the backfield will slide to the left, with the running back running in the direction of the B gap behind the H-Back.

Offensive Line: The offensive line will line up in their normal positions, with the tight end on the right side of the field. At the snap of the ball, the two guards plus the strong-side offensive tackle will be responsible for blocking down on the players who are lined up opposite them, pushing them toward the right side of the field. The weak-side offensive tackle, center and tight end will all chip block the defensive players across from them and then peel off to block the linebackers at the next level.

X Wide Receiver: The X will line up to the left side of the field at the line of scrimmage. At the snap, he will run straight forward to clear the cornerback out of the zone. He will then be responsible for sealing off the cornerback by blocking him toward the sideline.

Z Wide Receiver: The Z will line up near the right sideline, about two yards off the line of scrimmage. At the snap, he will run straight forward and seal off the cornerback from pursuing the ball carrier on the other side of the field.

Quarterback: The quarterback will line up in shotgun, directly behind the center about four yards deep. He will take the snap from the center and then turn to his left to hand the football off to the running back lined up behind him.

Running Back: The RB will line up about two yards directly behind the quarterback. At the snap, he will run to the left, take the handoff from the quarterback and follow the H-Back, who will be serving as his lead blocker. The RB will look for the open hole that develops and run through that hole at full speed. 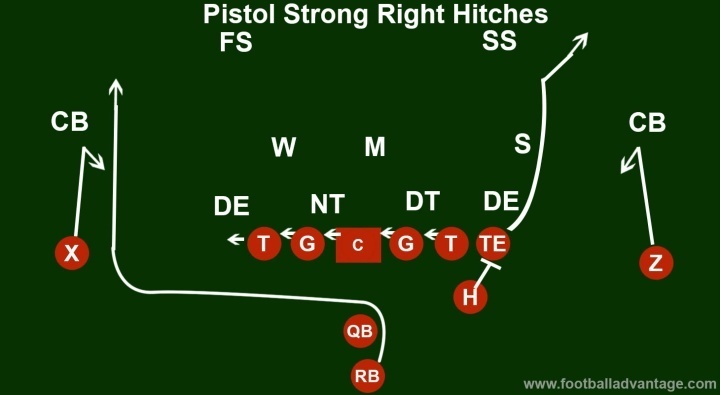 The way that the Pistol formation integrates deception is by lining up in just about the same alignment in every play but then running a different play.

That’s what will happen on this play, which is designed to make the defense think that it’s going to be a running play, but then run quick passing routes to take advantage of open spaces created on the field.

Offensive line: The offensive line will line up in their normal positions. At the snap of the ball, the offensive linemen will all go into pass protection mode, sliding the blocking to the right side of the field.

Tight End: The tight end again will line up at the line of scrimmage on the right side of the field. At the snap, he will fake as if he’s staying in to help block and then run a corner route toward the right sideline, hoping to take advantage of either single coverage or finding a space in a zone between the strong safety and Sam linebacker.

X Wide Receiver: The X will line up near the right sideline, about two yards off the line of scrimmage. Like the Z, he will run a curl route about five yards deep, hoping to take advantage of the cornerback on his side of the field lined up a few yards off the line.

H-Back: The H will line up as he did on the last play, two yards deep in the backfield, between the guard and offensive tackle on the strong side of the field. At the snap, he will run almost straight ahead toward the spot where the tight end lines up. This will make the defense think he is going to serve as a lead back for a running play, but instead, he will pick up the first defensive threat that comes into the backfield.

Running Back: The RB will line up about two yards directly behind the quarterback in the backfield. At the snap, he will run towards his right and fake that he is taking the handoff from the quarterback. (If the offense wants to run a Read Option play, the quarterback might actually hand it off to the RB if he sees an opening for a run). After the fake, the RB will run a wheel route to the left side of the field, hoping to get away from the Will linebacker.

Quarterback: The QB will line up in shotgun, about four yards directly behind the center. He will take the snap from the center, turn to his right and fake the handoff to the RB. He will then go through his passing progressions, first looking at either the X or the Y for a quick completion, then taking a look at the TE deep, or the RB out to the left.

The Pistol formation is a really excellent option for teams that like to keep defenses off balance and like to run a bunch of different plays every time out.

The Pistol will utilize the same basic personnel and formation on every play, but will cause that deception by running a lot of different plays out of this same alignment.

Teams who are built for speed and built more to pass the ball with a traditional pocket-passing quarterback will not do well with a Pistol formation.

And young football teams without a lot of experience will probably not be the best fit for the Pistol formation, either.