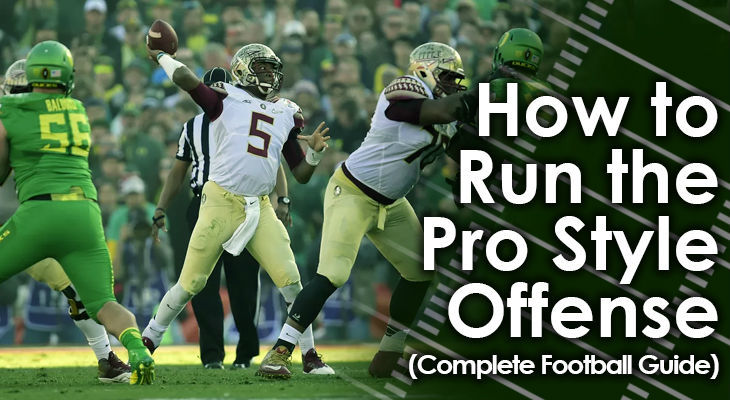 At the NFL level or with collegiate teams who have a similar personnel and skillsets with that of a typical professional team.

The reason for this is that Pro Style offenses are generally more complex and take more skill to run effectively.

With that being the case, Pro Style offenses aren’t traditionally run across the board at the high school or youth levels, or even across all of college football.

Even still, though, there are variations of a Pro Style offense – or at least some plays and offensive theory – that can be used at any level of football.

The great thing about a Pro Style offense is that it seeks to deploy a balanced strategy to attack the defense with a fairly equal number of running and passing plays.

This keeps the defense off balance and always guessing as to how they should properly defend a specific play.

The formations and scheme of a Pro Style offense can often be very complex and change from play to play.

This means that on one play, an offense might employ what looks more like a spread formation out of a shotgun, and the next, they might employ a play with the quarterback under center and a more traditional formation.

Most Pro Style offenses will use a balanced attack in the personnel as well, using a tight end and sometimes even a fullback – although fewer professional teams will use that position as often today as they may have in the past.

Who Should Use the Pro Style Offense?

Teams With a Variety of Personnel - A Pro Style offense is best run with teams that have at least two good wide receivers, plus a tight end and fullback (or a second tight end) who are good pass catchers.

Teams that Have Versatile Running Backs - The running backs in most Pro Style offenses will not only be asked to run the ball, but they’ll also be asked to catch as well.

Teams that have a strong-armed quarterback - The quarterback in a Pro Style offense doesn’t have to be mobile (although it never hurts for him to be so), because he won’t be asked to run very often, if it all. However, he will need to throw the ball out of the pocket often, and will need a stronger arm to do so.

Who Should Not Use the Pro Style Offense?

Teams That Are Small - A Pro Style offense is not good for a team of undersized players. The wide receivers will often be facing linebackers and/or safeties when running routes. The more traditional formation of a Pro Style offense also means the defense will have the ability to run a heftier personnel package as well.

Teams That Either Can’t Run or Can’t Pass - It’s OK for a team that’s either very strong in the pass or in the run to use a Pro Style offense. However, it wouldn’t be good if they can only pass or only run. The key to a Pro Style offense is balance.

Teams Without a Smart Quarterback - In addition to needing a big arm, the quarterback will have to read defenses very well in a Pro Style offense. Because he will be throwing out of the pocket as well, it would be better if he were taller, which allows him to see the field over the big offensive and defensive linemen in front of him.

Almost all plays that are run in a Pro Style offense will have the same personnel.

Again, there can be a few variations here and there, such as swapping a fullback for an extra tight end or wide receiver.

But for the most part, the 11 players on the field will be the same on every play.

Here is the more traditional personnel in a Pro Style offense:

As stated before, the formation for Pro Style offenses will look generally the same on every play.

There can obviously be some tinkering done with the formation to give the defense a different look on different plays.

A coach may also substitute the H-back for another tight end or even a wide receiver.

The standard formation for all Pro Style plays are:

Guards (G) - Both start in their normal position, on either side of the center.

Offensive Tackles (T) - Both start in their normal position, on the outside of the guards.

Tight End (TE) - Starts outside the offensive tackle on either side of the field, depending on the particular play call.

X Wide Receiver (X) - Starts lined up wide near the sideline at the line of scrimmage, on the opposite side of the center from the tight end.

Z Wide Receiver (Z) - Starts lined up wide near the sideline off the line of scrimmage, on the same side of the center as the tight end.

Quarterback (QB) - Starts lined up under center to take the snap.

H-back (H) - Starts lined up in the backfield, about two yards behind the quarterback depth-wise, and between the tight end and the offensive tackle.

Running back (RB) - Starts lined up directly behind the quarterback, about five yards deep in the backfield. For this pass play, the quarterback will start lined up under center, with two wide receivers, an H-back and a running back on the field, along with the five traditional offensive linemen.

This passing play will flood the left side of the field with passing routes, all toward what is the strong side of the offense.

The entire offensive line minus the tight end will slide to their left at the snap of the ball.

They will immediately snap back out of their three-point stance and block whatever player tries to break through the line of scrimmage in their zone.

The tight end will run a corner route, running about seven yards or so straight downfield before slanting diagonally toward the corner of the end-zone to his left.

The Z wide receiver will run a short curl route toward the middle of the field, ending his route not far from where the tight end lined up horizontally.

The X Wide Receiver will run a fly route that is designed to clear both the cornerback and strong safety out of the middle of the field.

The H-back will run a flat route toward the outside sideline, serving as the quarterback’s safety valve in case no one else is open.

The running back will stay in the backfield to help block on this play.

He will keep his eyes open to both sides of the field to see where a free defender may break free from.

At the snap of the ball, the quarterback will drop straight back about seven to 10 yards and go through his progression to read who may be open.

He’ll first look at the X and TE before checking down to either the Y or H, if the deeper routes aren’t open. For the Pro Style run play, we’ll show you a slightly different look in the formation.

We’re still going to use the exact same personnel as the passing play above, but this time, we’re going to switch the formation around quite a lot, spreading the field out wide and having the quarterback line up in the shotgun to keep the defense off balance a little.

This is a formation that is designed to make the defense think the play is going to be a pass, but then ends up being a run instead.

The run will be going through the A gap on the left side of the center, which will be considered the strong side because that is side where the tight end will line up.

Will be responsible for blocking the nose tackle, shielding him off from the left side of the field.

Will be responsible for picking up the defensive end and blocking him to the guard’s right.

Will pull around behind the guard and center, turning up field through the A gap to block the Mike linebacker.

Will block the defensive tackle toward the left sideline.

Will block the defensive end toward the left sideline.

Will line up spread out wide, halfway between the left sideline and the strong-side offensive tackle, and slightly in the backfield.

At the snap of the ball, he will run a quick out route, hopefully taking the Sam linebacker with him.

He will be responsible for blocking off the Sam linebacker as well once he realizes it is a run play.

Will line up wide close to the sideline at the line of scrimmage, on the same side of the field as the tight end.

He will at first fake that he is running a go route to confuse the cornerback and the strong safety.

Will line up in a similar position to the tight end, but on the weak-side of the field.

At the snap, he will also run a quick out route, hopefully taking the Will linebacker with him.

He will try to help run block the Will if he can.

Will line up wide close to the sideline off the line of scrimmage, on the opposite side of the field as the tight end.

Will line up in the shotgun formation, about five yards directly back behind the center.

He will receive the snap from the center, fake that he is going to throw it for a second, then hand the ball off to the running back.

Will line up in the backfield, slightly behind and to the right of the quarterback.

At the snap, he will stand up like he’s going to pass block, but then take the handoff from the quarterback.

He will follow the weak-side offensive tackle who is pulling through the A gap, making any adjustments based off other running lanes that have been open by the blockers.

​Highly-skilled football teams at the NFL and collegiate level run the Pro Style offense as their base formation because it is so successful in keeping defenses off balance.

It’s a type of offense that provides coaches with a plethora of options when it comes to formations, without having to substitute too many different personnel.

It’s also a great offense because it can easily be used for running plays and passing plays, and because there is a lot of deception that can be utilized out of what looks like a rather simple, standard formation.

While a team that wants to run a Pro Style offense should definitely have more skilled players (which might eliminate most youth football teams), it’s a type of offense that can be used in at least some iterations at almost any level of the game. "The Ultimate Guide to Football Defense"

Enter your email below and I'll send it to your inbox immediately!