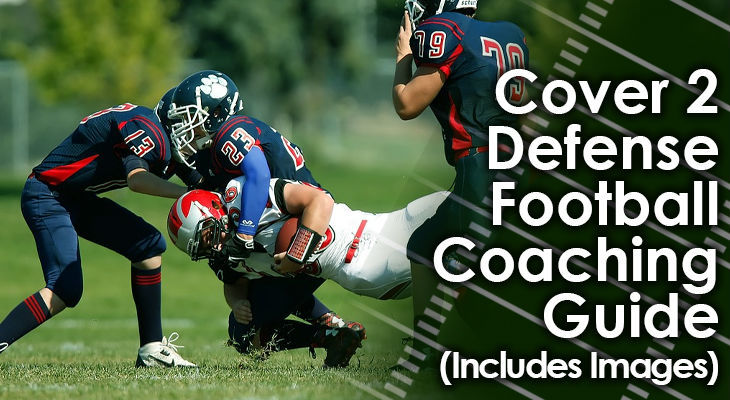 The Cover 2 defense is a zone-based defense in football.

Which means no player has a defensive assignment for a specific offensive player.

Each level of defense has a zone on the field for which they’re responsible for covering, and whatever receiver enters that zone on a passing route is that player’s responsibility.

The Cover 2 defense gets its name from the two safeties who play deep over the top, serving as the last line of defense between the offense and the end zone.

With seven players dropping back in coverage, the pressure on the offense is generated only by the defensive line, and blitzes are rare out of the Cover 2 formation.

As such, it’s a defense that is used most predominantly when the offense is in an obvious passing situation.

Who Should Use the Cover 2 Defense? The Cover 2 defense can be used by just about any team.

It’s a simple concept for defensive players to understand, because instead of having to follow a receiver all over the field, each defensive player is responsible for covering just a small area of the field.

The idea is that if each player sticks to his zone in coverage, it will be hard for the offense to find a lot of room for a play that could gain considerable yardage.

Defenses will often utilize the Cover 2 scheme in third-down-and-long situations for the offense, where they need to gain close to 10 yards or more to get a first down.

The Cover 2 defense can be especially good for defenses that can create a lot of pressure on offenses with just the four down defensive linemen.

With the four linemen creating enough pressure on the quarterback on their own, this then allows the other seven players to cover the rest of the field like a blanket.

It’s Simple - The Cover 2 defense is easy for players to understand because most players are only responsible for covering a specific zone of the field instead of trying to remember multiple responsibilities with intricate schemes.

Keeps the Ball Underneath - The Cover 2 defense was designed to prevent big yardage plays on offense. That’s because the coverage funnels receivers to routes underneath and makes it hard for receivers to gain big yardage.

Covers Receivers Beautifully - Because seven defensive players are dropping into coverage, there isn’t a lot of available space on the field for receivers to find an opening.

Allows Linemen to Attack - The defensive linemen in a Cover 2 defense are asked to do what they love to do best – attack straight ahead. They’re tasked with putting as much pressure on the offense straight up the field as they’re able to do.

Underneath Passes Can Work - Because both safeties drop deep into coverage, and because the linebackers can do the same too, short crossing routes can often find available space against a Cover 2 defense.

Can’t Be Run All the Time - Because it’s susceptible to underneath passes and running plays, it’s difficult to run the Cover 2 defense on every play unless the defensive line can create some serious pressure up front on every play.

How to Run the Cover 2 Defense The defensive line in a Cover 2 defense has perhaps the simplest and watered-down assignment of any defensive alignment.

Defensive linemen in a Cover 2 scheme are tasked with putting as much pressure in the backfield as they possibly can.

They’re asked to run straightforward, blowing up as many offensive linemen as possible and causing as much disruption as possible on every single play.

That’s because the linebackers, cornerbacks, and safeties don’t often blitz in a Cover 2 defense.

It can’t get much simpler than that.

The two defensive tackles in a Cover 2 defense will line up anywhere between the offensive tackle and the center.

There are also two defensive ends on the field in a Cover 2 defense.

They are lined up either on the offensive tackle’s outside shoulder or over the tight end if there’s one on the field.

While the defensive linemen may use curls or stunts between the defensive tackle and defensive end on the same side of the field to cause some confusion, the primary duty of the position is to cause as much disruption as possible at the line of scrimmage.

The middle (Mike), strong-side (Sam) and weak-side (Will) linebackers in a Cover 2 defense need to all have good lateral movement skills and the ability to read and run with receivers.

The linebackers can be tasked with their zone coverage in one of two ways:

The first option is to keep all three linebackers in a zone depth of about five to seven yards, starting from the backs of the defensive linemen and ending at where they initially line up at the snap of the ball.

In this scenario, the linebackers would split the width of the field into threes, so that each linebacker has a third of the field to cover width-wise, from a depth of five to seven yards in front of where they initially position themselves.

The second option is to drop the Mike linebacker straight back into coverage as almost a third safety.

This scheme would most often be used when the offense is facing a longer distance to gain a first down, such as possibly a third-and-15 situation.

In this scenario, the Sam and Will would split the field in half widthwise from a depth of five to seven yards in front of them.

Then, the Mike and the two safeties would split the field in thirds width wise for roughly the same depth yardage, but at a much deeper position on the field.

No matter which way the Cover 2 defense is deployed with regard to the position, the linebackers are primarily responsible for covering their zone on the field.

They are only responsible for receivers or ball carriers who enter their zone, and it is essential that they not wander outside their zone, otherwise a big opening could develop for the offense to take advantage of. Similarly, the two cornerbacks and two safeties are responsible for covering a specific zone near where they line up on the field.

The cornerbacks will line up to start the play anywhere from directly over the wide receiver to a depth of about five yards behind the receiver.

At the snap of the ball, both cornerbacks (no matter what side of the field) are asked to cover the zone of the field that goes from the last offensive lineman on their side to the out-of-bounds sideline.

Depth wise, the cornerbacks are asked to cover players from the backfield (if a running back runs a passing route) to about five to seven yards off the line of scrimmage.

Anything behind that depth will be covered by either an outside linebacker or a safety.

The important thing for the cornerbacks to remember is that they have help with defenders behind them.

Therefore, they can be aggressive attacking the ball and ball carriers in front of them, because if they miss, another defender will be able to step in and help.

The free safety and strong safety in a Cover 2 defense will line up at a depth of about five yards behind the linebackers.

What the safeties do on any given play will depend on what the Mike linebacker’s responsibility is on that play.

If the Mike drops back deep into coverage, then the free safety and strong safety will split the field in thirds with the Mike at their level of coverage.

If the Mike does not drop back but stays at his original depth, then the free safety and strong safety will split the field in half widthwise and be responsible for the over-the-top coverage for their half of the field.

The important thing for the safeties to remember in a Cover 2 defense is that they are the literal last line of defense.

Their primary responsibility is to make sure no one gets behind them.

If they miss a tackle or if a receiver gets behind them running a route, there is no one else to help them, and a big play is almost assuredly in store for the offense.

The Cover 2 defense is a great defense to run in obvious passing situations for the offense.

It’s especially good at preventing passing and running plays from gaining too many yards.

That’s why a lot of defenses will run the Cover 2 scheme in situations in which the offense would need to gain a lot of yards to make a first down.

At the same time, the Cover 2 isn’t a defensive scheme that’s good to run on every down, because a smart and good offense will be able to take advantage of the defensive scheme by running the ball effectively and also running shorter passing plays over the middle of the field.

Still, the Cover 2 is a defensive alignment that’s used by a large number of teams at all levels of experience and skill level because it’s simple and because it can be effective in various situations.

As such, it’s a defensive scheme that should be in almost every defensive team’s repertoire in some fashion.