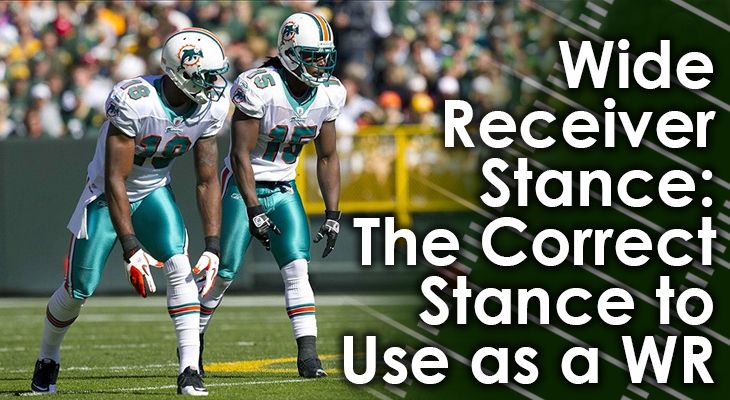 Wide receivers spend a lot of time building up the basic skills their position requires.

This includes speed, agility, strength, explosion and soft hands, to name a few.

Once the basics are down, they often start to work on more football-related skills, including:

These are obviously all great things to learn, and they're skills wide receivers will continue to work on in practice for as long as they play the game.

One skill that is often overlooked, though, is the ability of wide receivers to line up correctly and to explode off the line of scrimmage.

This 'skill' is what's called the wide receiver stance, and it's actually one of the most critical parts of every play for people who play the position.

Let's take a closer look at what a proper wide receiver stance allows a player to do, and then I'll explain how to align yourself in the correct stance.

What a Proper Stance Does

When a wide receiver starts in a solid stance, he puts himself in the best position to have success on each and every play he lines up for.

Having the proper body position helps the wide receiver accomplish a number of things.

1. Explode off the line

Having the proper stance allows receivers to position their body in the best way to explode off the line of scrimmage right at the snap of the ball.

This is extremely important no matter what the receiver will do on that particular play -- whether it's block, serve as the primary passing target, serve as a passing decoy, or even take a handoff.

If wide receivers don't start a play in the proper stance, it's easy for defenders to knock them off balance.

An incorrect stance may also lead to the receiver lacking the power to get that first step by defenders.

Second, a proper stance allows the wide receiver to see the entire field.

Before the snap, a wide receiver should be able to scan the entire field.

On passing plays, he'll be looking for potential openings in the field and what type of coverage he might face from the defense.

On running plays, he'll look to identify the player he'll target in blocking.

Finally, a proper stance will allow a wide receiver to look in toward the center so he can clearly see quarterback.

By doing so, wide receivers can gain a step on defenders if they're able to get off the ball quickly right at the snap.

For offensive players lined up close to the QB, this is easy to do since they know when snap will take place and can hear the QB progress through his pre-snap cadence.

However, wide receivers who line up further down the line most likely won't be able to do so.

Because of this, they'll need to try to time the snap based on what they know from the huddle and what they can see.

If they are in the proper wide receiver stance, they'll easily be able to peek in to see the ball snapped while not forcing their body off balance in any way.

How to Take a Proper Wide Receiver Stance

There are four parts to a successful wide receiver stance.

Here's a breakdown of each.

All wide receivers should have one foot positioned in front of the other when taking their stance.

The most natural position for this is to have the inside foot placed forward in front of the outside foot.

So, for receivers lining up on the right side of the field, their left foot will be forward, and vice versa.

You can certainly switch that feet positioning up, but make sure you are staying consistent and doing the same thing every play.

This will help you master your stance and exploding out of it.

Once the feet are in position, a receiver needs to balance his weight.

The general rule is that 80% of their body weight should be on their front foot, with the remaining 20% on their back foot.

Receivers should bend their front knee so that it's slightly out in front of their toe.

Their chest should be at a 45-degree angle and have a very slight bend for the back leg.

They should force their weight to go from their toes up to the insteps, which will allow them to explode from the stance.

A receiver should have their head facing forward for the most part, with their chin angled slightly down on an angle toward the ground.

While their head shouldn't face completely in toward the quarterback, they should angle it slightly that way, enough to see the snap.

While the quarterback is going through his cadence, a wide receiver should be scanning the field with his eyes.

Once he progresses through the scan, his eyes should settle in on the center so he can recognize the snap.

There's no hard and fast rule for where a receiver should place their hands.

He should make sure they're in a comfortable position, wherever that may be.

That being said, a wide receiver should have his hands ready for engagement from a defender. As such, it's not a great idea to have his hands behind his back, for example.

Most receivers will hold their arms up slightly, with their elbow bent and their hands relaxed but out in front of them.

Some receivers opt to have their hands to their sides in a relaxed but ready position.

You can play around with hand positioning to see what's most comfortable and gets you most ready to take on contact.

A proper stance is one of the most important determining factors in whether a wide receiver will have a successful play.

Getting into a proper stance is essential if a receiver wants to be in the best position possible to do whatever it is he's called upon to do on that play.

So, work on your stance over and over again when getting set up for receiver drills, figure out what's most comfortable for you, and practice on getting in that exact stance consistently play after play.