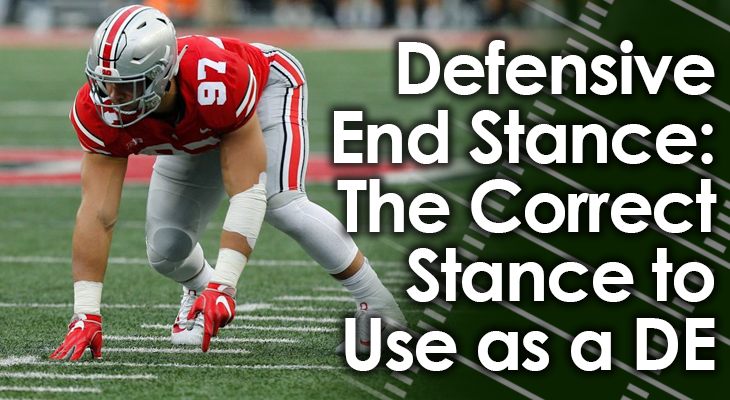 The stances football players take to start plays are critical in determining how they perform on every play.

Like almost all linemen on both the offensive and defensive sides of the ball, defensive ends will line up in a three-point stance most of the time.

This sees the DE put one hand on the ground in addition to both feet -- making up the three "points."

But, what are the details of each, and who should use them and when?

Let's take a closer look at the correct stance to use as a defensive end.

The three-point stance is the most common stance defensive ends use.

In fact, all defensive ends learn the three-point stance when they first start playing.

That's because it's very adaptable and works well whether the player will be rushing the quarterback or trying to stop the run.

Again, they will start the play with three parts of their body touching the ground -- their two feet and one hand.

To get into a proper three-point stance, a defensive end needs to start by spreading their feet apart at shoulder width.

Then, they should place their inside hand down on the ground to be in line with their back foot.

Their hand should stretch out about two steps ahead of their body when they bend down after their feet are in the proper place.

The three-point stance in this way will allow defensive ends to fire out at roughly a 45-degree angle.

It provides excellent leverage for either rushing the quarterback or protecting against the run.

Another option is for defensive ends to start a play in what's known as a two-point stance.

This is typically used by linebackers and defensive backs because it gives them better vision to see most of the field.

Since they'll be standing up instead of having a hand on the ground, they'll be able to better scan the field.

Defensive ends may decide to use this in obvious passing downs where they'll more than likely be rushing the quarterback.

Faster and/or smaller defensive ends may decide to go with this more often to either get a head start on pass rushing or to know where they need to pursue on running plays.

To get in the two-point stance, the defensive end should position their feet shoulder-width apart.

They will normally choose to have their outside leg slightly behind their inside leg, especially if they're about to rush the passer.

They should bend at the hips to sit their butt down a bit, and lean the top half of their body forward a bit.

They must also keep their hands out in front of them, ready to use to swat away the hands of blockers. 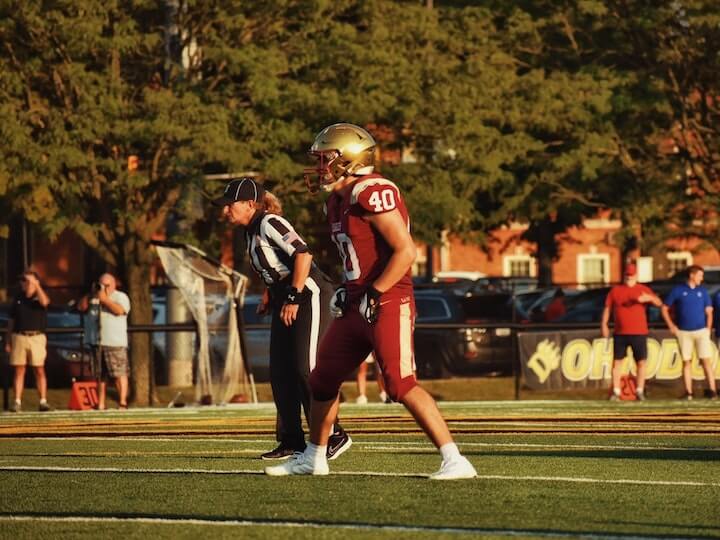 Defensive ends may use the four-point stance in obvious running downs for the offense.

It's used a lot by defensive ends at the youth level if they are up against a bigger offensive set with multiple tight ends.

At higher levels of the game, defensive ends may use a four-point stance in short-yardage and goal-line situations for the offense.

The four-point stance is good against the run, because it allows defensive ends to stay low to the ground.

In contrast, it's not ideal against the pass as it's harder for defensive ends to get a fast start off the line of scrimmage in pass-rushing situations.

To get in the four-point stance, the defensive end should do the same thing as with a three-point stance.

This time, though, they should move their inside foot up a bit, so that the big toe on it should be in the middle of their other foot.

Then, they should place both of their hands on the ground at the same two steps ahead of where they bend down.

They should keep their hands about shoulder-width apart.

Their heads must be up at all times, and keep the plane level from their hips to their shoulders to their head.

This positioning will allow defensive ends to explode out of their stance hard while keeping low to the ground.

This will help them make their way through a crowded offensive line as they look to plug holes against running plays. 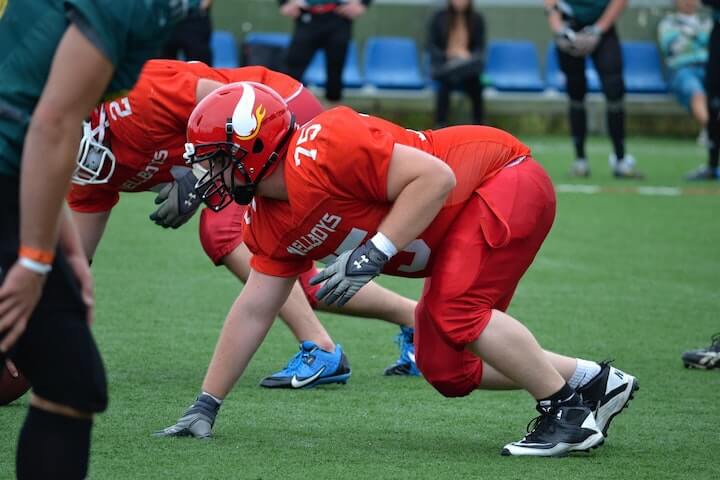 Most defensive ends will use a three-point stance before every play.

However, depending on the situation and the skills and makeup of the player, they may choose to use either a two-point or four-point stance.

Coaches should teach their youth defensive end the three-point stance to start and have them truly perfect that before moving onto any of the other stances.

As the players build on their skills and master the three-point stance, they can try the other stances as they see fit.