Pros and Cons of the 4-Point Stance in Football  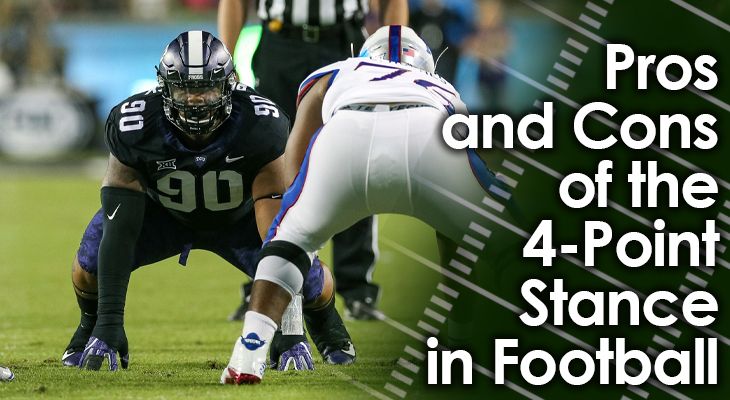 The 4-point stance is one of three main stances players align themselves in before the snap of the ball.

Each of these different stances have their pros and cons, and are used by different players for different reasons.

The 4-point stance is often used most by defensive linemen, especially in goal line and short-yardage situations.

But, why is it good for these situations?

And are there pros to using it in other situations, too?

Let's take a closer look at the 4-point stances and some of the advantages and disadvantages to having players line up in this form.

What is the 4-Point Stance?

The 4-point stance is defined by how many parts of a player's body is touching the ground before the snap of the ball.

In this case, there are four "points" at which the player's body is making contact with the ground pre-snap -- both feet and both hands.

The best way to do this is to have your toes on the ground, with the rest of your foot facing heel up to the sky. Your fingers will be on the ground propping you up, and a lot of your body weight will be on your knees.

Players should keep their backs flat, their knees bent slightly, and their hips elevated.

Then, as the offense lines up, the defenders will come up off their knees and be in the 4-point stance.

Their body weight should be shifted mostly toward the front of their body (and resting on their fingers), as it allows them to be ready to explode through the offensive line at the snap of the ball.

Pros of the 4-Point Stance

There are a few advantages to using the 4-point stance in football.

The first is that it helps players stay low to the ground before and right after the snap.

Staying low is crucial, especially for defensive and offensive linemen, as they need to gain leverage on the other player.

The second advantage is that it helps the player burst forward.

Since their weight will be leaned forward on both hands, it allows them to get extra momentum going forward compared to, say a 3-point stance.

In this stance, the player can put more of their body weight forward since it'll be supported by two hands on the ground rather than one.

Finally, the 4-point stance allows players to explode at the snap.

They'll have four points of contact with the ground, all of which they can use to push off and gain that extra burst.

These advantages are why defensive linemen are the players who will use the 4-point stance the most.

It helps interior and exterior defensive linemen get a strong burst at the snap so they can get through the line of scrimmage quickly.

It can be used in pass-rushing situations and also in short-yardage situations -- times when linemen may need an extra burst at the snap. 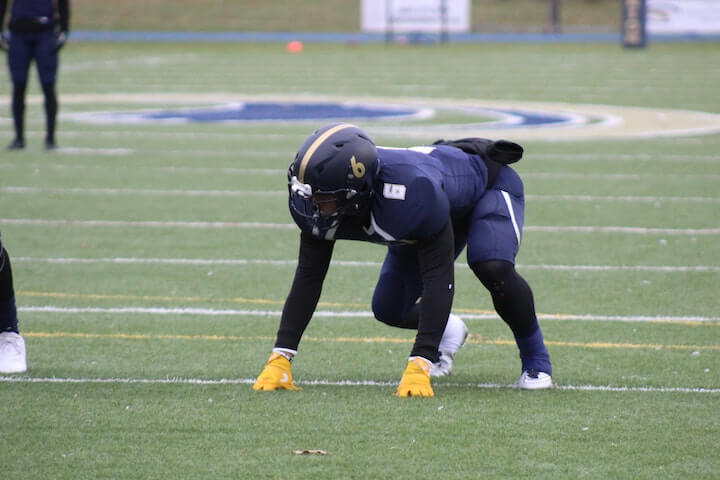 Cons of the 4-Point Stance

There are some downfalls to using the 4-point stance, and these will help explain why some linemen will hardly ever use the stance, if at all.

The first con is that there's a longer distance for the hand to travel before making contact with the other player.

For offensive linemen, it's extremely important that they are able to make first contact with defensive linemen so they can try to knock them off balance -- and vice versa.

Because of this, offensive linemen will hardly ever use a 4-point stance.

They will, instead, opt for the 3-point stance, where one of their hands will be off the ground, out in front of their bodies and ready to deliver that first blow.

The second disadvantage is that a 4-point stance can sometimes lead to too much momentum and burst at the snap.

While it's great to have a huge burst through the line of scrimmage, there are times when this can actually be detrimental.

This is particularly true for defensive ends and edge rushers.

Sometimes, if they're in a 4-point stance, they can burst through the line of scrimmage so quickly and get too far upfield.

If this happens, they can actually create running holes to their sides or voided areas of the field where the quarterback can step up to an empty space and make a throw with no one in his face.

In other words, the 4-point stance can sometimes cause an edge rusher to lose control of their body -- plunging forward too far and too fast.

That's why you'll see many edge rushers opt for either the 3-point or 2-point stance, so they can stay in control when they're rushing off the outside of the line of scrimmage.

The 4-point stance is one of the pre-snap forms players can take to get themselves ready for the upcoming play.

It involves having both feet and both hands on the ground before the snap of the ball.

The 4-point stance helps players stay low to the ground and get a huge burst at the snap, but sometimes, that burst can be too much.

It also makes it tougher for players to use their hands to gain leverage on their opponent.

For these reasons, the 4-point stance is mostly used by interior defensive linemen and by defenders in short-yardage and goal line situations.