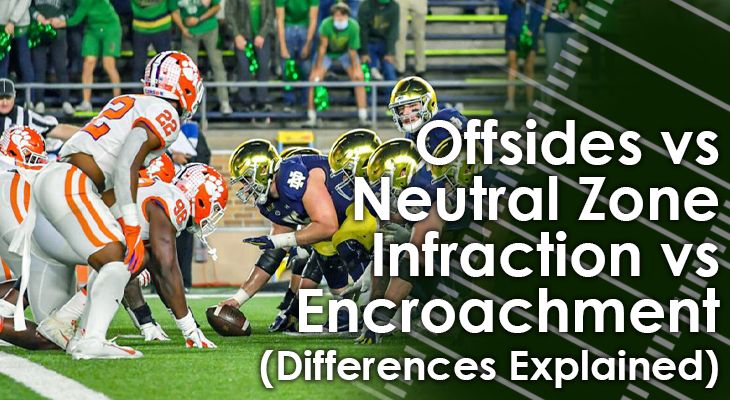 Offsides is one of the most common defensive penalties in football.

It occurs at the line of scrimmage and results in a five-yard penalty. The penalty relates to where players line up, their positions, and where they are at the snap of the ball.

It's a relatively easy penalty to understand, except for one thing...

There are two similar but slightly different penalties just like it.

At times, you may hear a referee call a Neutral Zone Infraction or an Encroachment penalty against the defense.

It may be natural for you to think it's the same as Offsides, especially since they result in a five-yard gain for the offense.

However, there are slight differences between all three that are important for both coaches and players to understand.

It doesn't just apply to defensive linemen at the line of scrimmage, either...

It applies to every player on the defensive side of the ball who might be approaching the line of scrimmage before the play begins.

Let's take an in-depth look at Offsides vs Neutral Zone Infraction vs Encroachment in football.

The Line of Scrimmage Explained

The first thing to understand before diving into the penalties is the Line Of Scrimmage.

The LOS is an imaginary line that starts at the location of the ball before each play and extends the entire width of a football field.

After each play, the line of scrimmage can change based on the outcome of the previous play.

The LOS starts where the ball sits on the field, before the snap.

In actuality, there are two lines of scrimmage:

Now that we got the line of scrimmage and neutral zone out of the way, we can dive into the specific penalties.

Offsides is probably the most common defensive foul called in football.

It's a defensive penalty that occurs before the snap of the ball.

According to the NFL, offsides occur when "any part of a player's body is in or beyond the neutral zone or beyond a restraining line when the ball is put in play."

In other words, if a defensive player jumps out of their stance and moves into or beyond the neutral zone as the center snaps the ball.

This is the one important distinction between Offsides and the two other penalties.

Here, the defensive player will have already jumped out and either entered the neutral zone or already crossed it as the center snaps the ball.

To avoid Offsides penalties, coaches need to remind defenders to keep an eye on the center. Tell them to remain disciplined and patient.

As tempting as it is to try and get a slight head start, defenders have to remain in place until the snap or they risk a 5-yard penalty.

There is one other major aspect to Offsides penalties...

When referees throw a flag for an Offsides penalty, they don't have to blow the play dead. The offense can basically attempt whatever play they want with no consequences.

This allows the offense to take a huge risk, let's say on a long downfield pass.

If it's incomplete, intercepted, or if the quarterback gets sacked, it won't matter as the offense will just accept the penalty.

The Offsides penalty will cancel out any negative play that may happen, allowing the offense to take the five-yard penalty.

If the offense gains huge yardage on taking a chance, they can always decline the penalty and accept the outcome of the play instead. 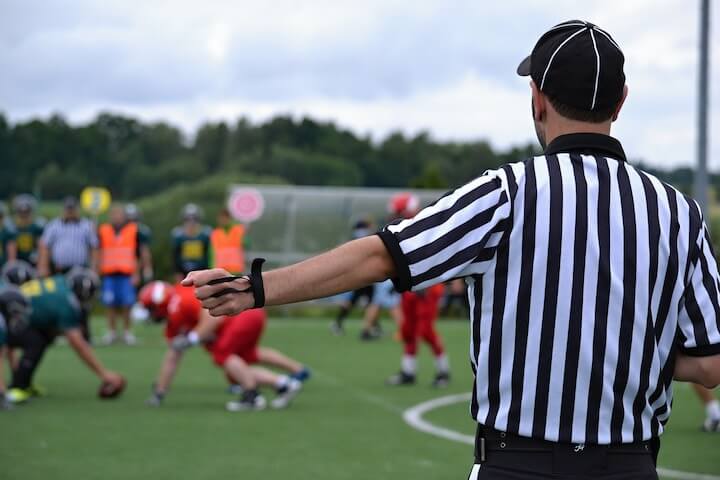 A Neutral Zone Infraction is similar in nature but is slightly different.

This one deals with any player who invades that neutral zone. In most cases, it involves interior linemen on defense, such as defensive tackles or nose tackles.

The NFL has three explanations for Neutral Zone Infraction:

When defenders move beyond the neutral zone before the snap and find themselves beyond or parallel to an offensive linemen.

It could also be if they have a path that's unimpeded to either a kicker or the quarterback, even if they haven't made any contact with a blocker.

In this case, officials blow the whistle to stop the play right away.

Before the snap, a defender enters the neutral zone close to where an offensive player is.

This then causes the offensive player to react and move as well before the snap.

The ref will then blow the whistle and rule that the offensive player moved due to the defensive player's initial movement.

If the offensive player doesn't react right away, the defender still has the opportunity to get out of the neutral zone and back to a legal position.

This, though, must happen before the center snaps ball.

When a ref warns a player that they are lining up in the neutral zone but still enters into the zone.

This will be a foul even if the player then moves back into a legal position without making contact with an offensive player or causing a reaction.

In most of these cases, Neutral Zone Infractions will be dead-ball fouls.

In other words, there won't be an opportunity for the offense to take a chance on a huge play and then accept the penalty if something goes wrong.

Still, the penalty results in a gain of five yards for the offense, making it easier for them to gain the next first down.

There's one main thing that separates Encroachment from the other two penalties.

Another instance of Encroachment is if the defender enters the neutral zone and interferes with the ball itself while the snap is occurring.

In both cases, Encroachment will result in the play being called dead right away by a referee.

The most common reason why an Encroachment happens is a hard count by the offense.

Sometimes, the quarterback will call for a change of cadence for the snap to try to keep the defense off-balance.

This may then confuse one of the defenders, and cause them to jump early and make contact with an offensive player.

This is a strategy offenses at all levels employ to try to get defenders to jump early.

If it's successful, it'll result in a five-yard gain for the offense from the penalty.

To coach players on how to avoid Encroachment fouls, remind them to concentrate on the ball instead of the quarterback's pre-snap barks.

It doesn't matter how loud the quarterback is or how long he talks for.

The signal of the start of the play -- when defenders are able to cross into the neutral zone -- is when the center actually snaps the ball.

There are many similarities between the Offsides, Neutral Zone Infraction, and Encroachment penalties against the defense.

At the same time, there are some major differences that are very important for defensive coaches and players to understand.

By educating players on these differences, you can give them the proper tools to avoid committing any of these three penalties.