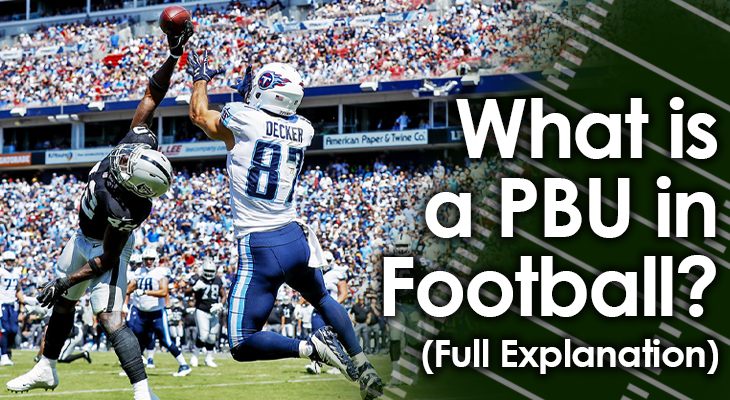 There are many different acronyms in football to quickly explain various aspects of the game.

Many of these acronyms are for statistical purposes and are very well-known to people who play / follow the game.

These include things such:

One acronym that may not be as familiar in football is the "PBU".

This acronym stands for -- Pass Break Up.

A PBU is a statistic tracked in football for defensive players, most commonly by defensive backs who cover receivers.

Let's take a closer look at what a PBU is and how it gets recorded.

What is a PBU in Football?

A PBU simply stands for "Pass Break Up".

Again, it's a statistic that's recorded on the defensive side of the ball.

A PBU refers to any time a defensive player either knocks down or tips a pass from the QB, with the play resulting in an incomplete pass.

If the pass ends up going into a receiver's hands after the defender tips the pass, then a PBU is not recorded.

Likewise, if a defensive player ends up intercepting a pass after it's tipped, then it's also not counted as a PBU.

What Constitutes a PBU?

Any contact a defender makes with an attempted pass that results in an incomplete pass will be recorded as a PBU.

It doesn't matter whether the defender slaps the ball with his hand and it falls directly to the ground, or whether he tips the pass and knocks it off its trajectory so it's too hard for the receiver to catch.

The only two factors in whether a PBU will get recorded are:

If the scenario meets those two qualifications, then the play will go down in the stat book as a PBU.

Positions That Get PBUs

Like most other stats in football, there are some positions that typically record more PBUs than others.

Just like how a running back is more likely to record more rushing yards than a wide receiver, there too are some positions that traditionally record more PBUs than the others.

Let's take a position-by-position look at this.

The members of the secondary are the most likely to record PBUs.

That's because safeties and cornerbacks are the players who most likely match up against wide receivers -- who most of the QBs pass attempts are thrown to.

Based on the primary tasks of their positions, members of the secondary should be in the best position to record PBUs.

Generally speaking, cornerbacks will record more PBUs than safeties, though safeties can certainly get in on the act as well.

Linebackers will also get a good amount of chances to break up passes and, as a result, record PBUs.

In fact, linebackers may be in the position to record a PBU even if they aren't covering a receiver man-to-man.

Because they align themselves in the middle of the field, receivers often cross in front of or behind them as they run their routes.

This gives the linebackers a chance to break up the passes.

In addition, linebackers have coverage responsibilities in zone defensive schemes.

In man-to-man schemes, they often match up with tight ends and running backs who also run routes from time to time.

While it's not common, defensive linemen can actually record PBUs.

Most of the time, this happens is if they stick their hands up at the line of scrimmage to try to block a pass.

You'll see this a lot in games as defensive linemen rush the quarterback.

As they get closer, if they can't get close enough to record a sack, they'll stick their arms up to try to deflect passes.

Some defensive ends may even step back and jump into the air to provide an even larger barrier to completing a successful pass.

In both of these cases, if the player knocks the pass down or tips it at the line of scrimmage, they will record a PBU. 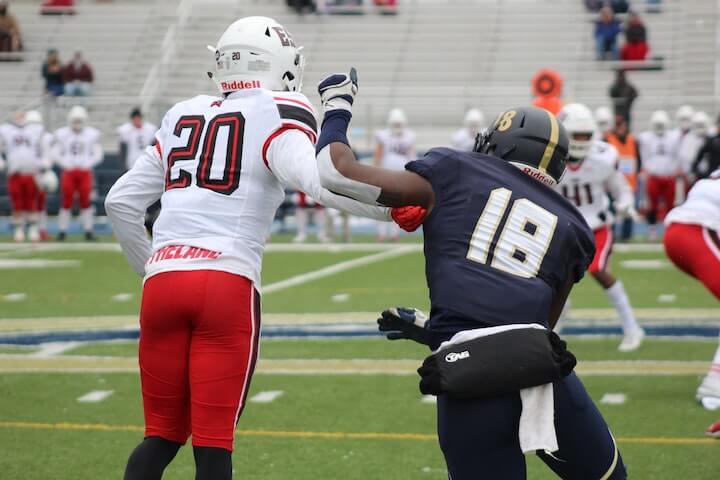 What a PBU Means

A PBU by itself doesn't necessarily tell you anything specifically...

For example, a cornerback who records a lot of PBUs doesn't automatically make them one of your best at that position.

There are a few reasons for this.

To really see the effect of PBUs, you'd have to compare them to how many completed passes made on that same player.

For example, a player recording five PBUs in one game sounds great.

However, if they also allowed 20 completed passes thrown their way, then it's likely he didn't have a great game.

Some defensive players don't have a lot of chances to record PBUs.

This is especially true at higher levels of football, when offenses face a defense with excellent pass coverage.

Here, QBs may simply choose not to throw in the direction of the defense's best cornerback.

So, that player won't even have the chance to record a lot of PBUs, even though he's having a huge impact on the game.

A PBU is a football term that stands for pass break up.

It's a statistic that refers to a play where a defensive player either knocks down or tips an attempted pass, resulting in an incomplete pass.

All defensive players have the opportunity to record PBUs, though members of the secondary are likely to record the most.

While PBUs by themselves aren't great indicators of whether a player had a good or bad game, teams can use them to see how effective a player is at defending against passes thrown his way.