What is Illegal Touching in Football? (Full Explanation) 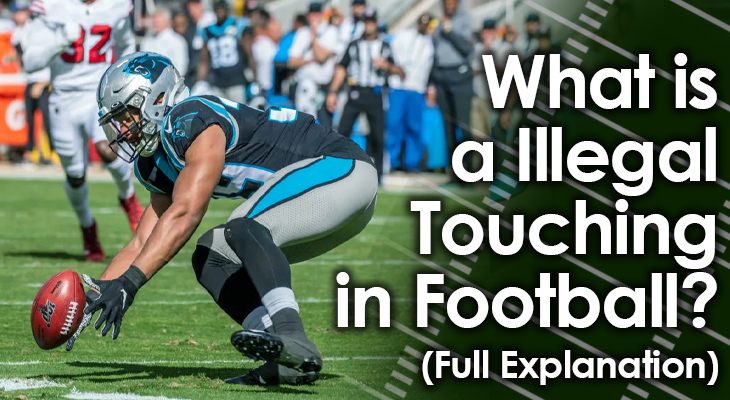 This means that on any play, there are receivers who are allowed to catch passes from the quarterback, and there are those who can't.

It's a pretty simple concept, actually...

Most offensive linemen are considered non-eligible receivers -- though there are a few exemptions in which an offensive tackle can be eligible to receive a pass.

Likewise, all running backs, tight ends, and wide receivers are eligible to catch a pass on any play.

They may run a route and catch a pass from the quarterback wherever they run on the field.

There are some instances where an eligible receiver will become ineligible in the middle of the play.

If these players end up being the first player to touch the ball after they become ineligible, the offense will receive an "illegal touching penalty".

Let's take a closer look at what illegal touching in football is, how referees call it, and what the penalty for committing one is.

When Illegal Touching in Football Occurs

An illegal touching penalty only applies to the first player who touches the ball on a forward pass.

For example, if the quarterback throws a pass to a wide receiver and that wide receiver touches the ball first, only he will be subject to a potential illegal touching penalty.

If the wide receiver tips the ball and it travels in the air to someone else, that second person isn't subject to the penalty.

Likewise, if a defender slaps the ball first, the second person to touch the ball (if on offense) is NOT subject to the penalty.

In other words, when deciding whether an illegal touching penalty occurred or not, you only need to look at the first player who touches the football. 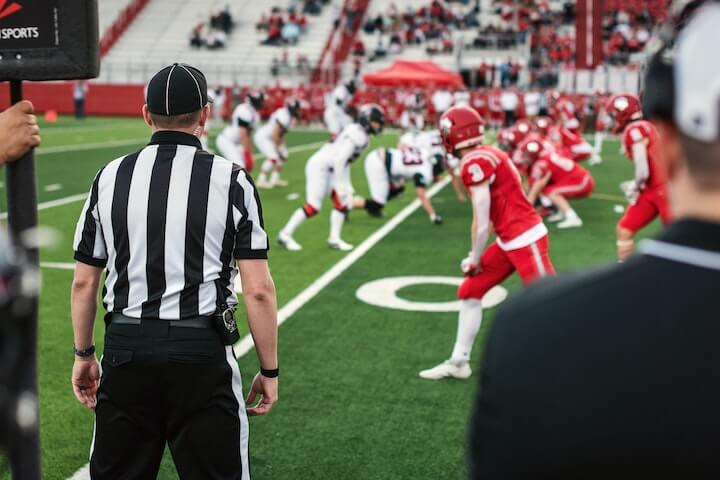 There are two situations in which an illegal touching in football can happen.

#1. Receiver Out of Bounds

The first scenario revolves around a receiver.

No eligible receiver can run out of bounds on his own, come back into the legal playing field, and be the first player to touch a pass.

This rule is in place to prevent receivers from simply running out of bounds to avoid getting covered by a cornerback, for example.

If a defender pushes a receiver out of bounds, the rule still applies.

So, receivers need to do everything they can to not only avoid running out of bounds on their own, but also getting pushed out of bounds by defenders.

Of course, if a receiver gets pushed out of bounds, the defender could face other penalties such as illegal contact -- depending on the situation.

The second scenario for illegal touching happens typically when offensive linemen are the first to touch a forward pass.

All linemen are considered ineligible to catch a pass unless they first report to the referee before the play begins.

There are only certain situations in which this is even possible...

But if it does happen, the referee will make a public announcement that a certain offensive lineman will be eligible on that play.

If the quarterback throws a pass and an offensive lineman is the first player to touch the ball, then they'll get penalized for an illegal touching penalty.

The Penalty for Illegal Touching in Football

An illegal touching penalty does not stop the play automatically.

Instead, the play will conclude all the way to the end, and then the penalty will be called.

The reason for this is that the defense could end up forcing a turnover after the penalty is committed, which would then result in them declining the illegal touching penalty.

Illegal touching is penalized slightly different at the various levels of football.

At ALL levels, the offense will receive a 5-yard penalty.

What differs, however, is that in the NFL, the penalty will also be accompanied by a loss of down.

While in college, high school, and youth football, though, there will not be a loss of down.

For example, if an illegal touching penalty occurs in the NFL on a 2nd-and-7 play, the next down will be 3rd-and-12 for the offense.

In the same scenario at all other levels of the game, the next play will be 2nd-and-12 for the offense.

This is a major difference, so make sure you know the rules depending on which level of football you're playing / coaching.

You can't just go by what you see when watching NFL games on TV.

Illegal touching in football is a penalty that is often misunderstood.

While the rules are slightly complicated, they can also be boiled down to two relatively simple scenarios.

The important thing to remember is that an ineligible receiver cannot be the first player to touch a forward pass.

Everything after that doesn't matter.

So if you're coaching youth football, teach your players what makes an eligible receiver and what makes a receiver ineligible.

Then, you can teach them how to easily avoid committing an illegal touching penalty.