What is Intentional Grounding in Football? (Full Explanation) 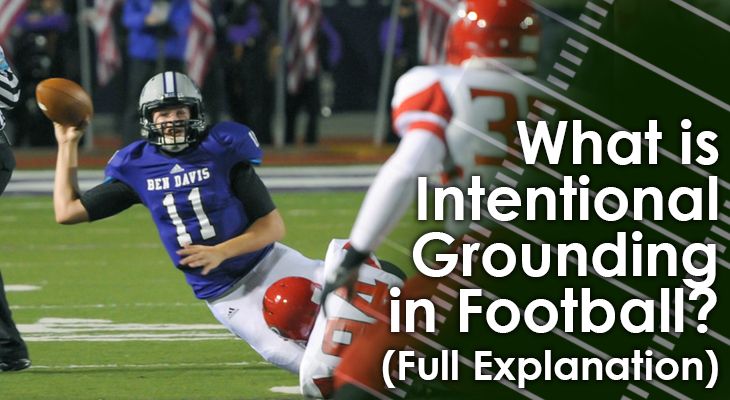 From time to time in a game of football, a quarterback will feel pressured by the defense.

To avoid taking a sack and possibly turning the ball over, quarterbacks may simply choose to throw the ball away.

In this scenario, he's OK with an incomplete pass that will result from him throwing the ball away, in exchange for not losing significant yardage with a sack or possibly fumbling or throwing an interception.

What some people may not know is there are rules that dictate when a quarterback can throw the ball away and what he has to do to avoid a penalty.

If the quarterback doesn't meet these requirements, he will be called for an intentional grounding penalty.

Intentional grounding is one of the more complicated rules in football.

At the same time, it's very important to understand, as committing a foul of this kind can be very devastating to an offense's chances of marching downfield successfully.

Let's take a closer look at what intentional grounding is, and what happens when it's called.

It is basically when a passer who is facing "an imminent loss of yardage", throws a forward pass that has no realistic chance of completion.

The National Football League defines a realistic chance of completion as:

"a pass that is thrown in the direction of and lands in the vicinity of an originally eligible receiver."

This definition is a little unclear, though.

Basically, this means that a quarterback can't simply throw a ball wherever he wants just to avoid a sack or being hit by a rushing defender.

The rule, as written, provides some leeway for referees to decide whether a pass does or does not have a "realistic chance of completion".

The quarterback throws a pass out of bounds with no receivers on that side of the field.

The quarterback turns to his right and throws a pass out of bounds. However, there is a receiver in the general direction of the throw, and the pass is thrown at a relatively realistic height.

There is a clear difference between the two.

While the intent behind each pass was to simply throw the ball away, the quarterback must at least ACT as if he were trying to complete a pass as he's trying to avoid a sack or hit by a defender.

Exceptions to the Rule

There are two major exceptions that make a pass by the quarterback not intentional grounding.

a. Hit by the Defender

The first happens when the quarterback gets hit by a defender in the act of throwing.

If this occurs, the referee will not call intentional grounding -- no matter where the ball lands.

The reason for this is that the contact made by the defender can cause a change in the trajectory of the ball.

Therefore, even if the passer was going to throw the ball away legally, the resulting pass may not be legal only due to the contact from the defender.

b. Outside the "Tackle Box"

The second exception occurs when the quarterback is outside what's known as the "tackle box."

If the quarterback is forced outside of this tackle box by defensive pressure, he is allowed to throw the ball away wherever he wants without the threat of being called for intentional grounding.

The only thing the passer must do to avoid a penalty in this scenario is make sure the ball at least makes it back to the line of scrimmage.

If the quarterback simply throws the ball to the ground in front of him, for example, he could still be called for intentional grounding even though he's outside the tackle box. 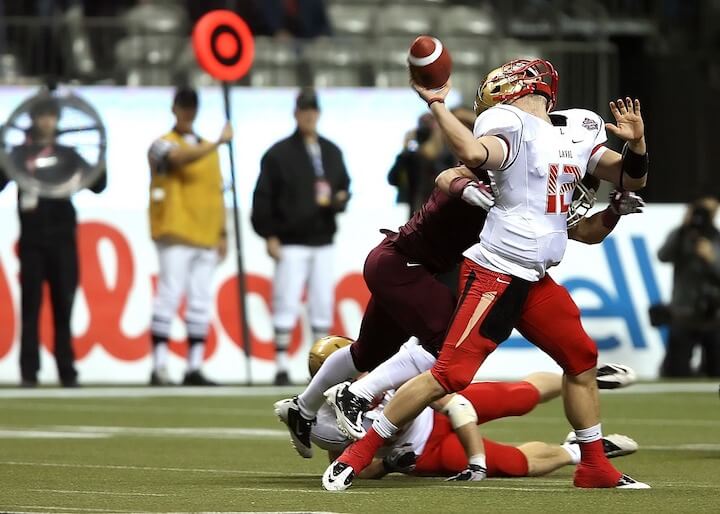 The Penalty for Intentional Grounding

The rules for intentional grounding are the same at all levels of football.

What differs slightly is the resulting penalty.

In the NFL, an intentional grounding penalty always results in a loss of 10 yards and a loss of a down for the offense.

For example, if an intentional grounding happens on a play that began as 2nd-and-6, then the next play will start at 3rd-and-16.

In college football, the same loss of down occurs, but the distance of the penalty varies. The next play will take place at the spot that the foul occurred.

Let's use the same example as above, where the play started as 2nd-and-6...

If the quarterback committed an intentional grounding foul that was 4 yards behind the line of scrimmage, the offense will be penalized only 4 yards and have a loss of down. The next play, then, will be 3rd-and-10.

Intentional grounding is often one of the most confusing and misunderstood rules in football.

There are various scenarios that will determine whether a pass is a penalty or not.

While the rules are clearly defined, there is a level of subjectivity given to the referees while the play is going on.

It's important that quarterbacks learn the general rules of intentional grounding and how to avoid a penalty, as it results in a loss of down and a loss of significant yardage when one is called.

While it's a great strategy to throw the ball away when there's a lot of pressure on the quarterback, players should learn how to do it properly to avoid an intentional grounding penalty.